The Nikon Z 14-24mm f2.8 S clearly is the rightful successor to the legendary Nikon AF-S 14-24mm f2.8G as it is optically better in every aspect than the F-Nikkor except for Bokeh. And with 450g less weight to carry around and a set of nifty features Nikon has managed to create another worthy member for their trinity of professional f2.8 zoom lenses: Highly Recommended!

Check prices on the Nikon Z 14-24mm f2.8 S at B&H, Adorama or WEX! Alternatively get yourself a copy of my In Camera book or treat me to a coffee! Thanks!

The Z 14-24mm f2.8 S is a unique lens: it’s the only full-frame zoom lens starting at 14mm focal length with a large f2.8 focal ratio which allows to use standard filters albeit of a huge 112mm diameter – or you can use gel-filters in the rear holder. This is different from its F-mount predecessor, the AF-S 14-24mm f2.8G, which had such a bulbous front element with built-in lens hood that one had to resort to a third party solution which attaches to the front-end of the barrel. Other features also put the new Z 14-24mm f2.8 S ahead of its F-mount sibling: It has a customizable function ring which can be assigned to operate the aperture or the ISO or exposure compensation and it features the nifty OLED display which Nikon introduced with its Z 24-70mm f2.8 S lens. It can indicate focal length, aperture, or focusing distance and depth-of-field. And the new Z-Nikkor also has an additional button which can be assigned different functions e.g. AE/AF-lock.

Size (diameter x length): At 89 x 125mm (3.5 x 4.9in.) without lens hood the new Z-Nikkor is slightly shorter and slimmer than the F-Nikkor at 98 x 132mm including lens hood. Add another 30.5mm for the FTZ adapter when using the F-Nikkor on a Nikon Z body. Zooming does not change the length of both lenses. The Z 14-30mm f4.0 is 89 x 85mm + 25mm for the lens hood. But the short length of 85mm is reached only in its collapsed state which shaves 29mm off the maximum operating length of 114mm at 14mm focal length. The following images show the section of each lens at a comparable scale. [0]

Optics: The Nikon Z 14-24mm f2.8 S has 16 elements in 11 groups including 4 special dispersion elements and 3 aspherical elements. This is similar to the F-Nikkor (14 elements in 11 groups) but with a higher number of special elements. To reduce reflections causing flare, glare and ghosting both Z-Nikkors and the F-Nikkor employ Nikon’s Nano-coating but only the Z 14-24mm f2.8 S profits from the new “ARNEO” anti-reflective coating. Both Z-Nikkors also have fluorine-coating on the front element to repel water, dust, and dirt and make cleaning easier. [+]

Filter-thread: The new Z Nikkor needs huge 112mm filters which can be mounted in one of the two lens hoods that come with the lens. 112mm filters are pretty expensive but you can also use gel filters in a rear filter holder (see image below). Keep in mind though that gels cannot be rotated which precludes the use of polarizers. For the F-Nikkor you’d need a third party solution which attaches to the front-end of the barrel, such as the Lee SW150 system. The Z 14-30mm f4.0 S uses standard 82mm filters. [0]

Auto focus: Yes with built-in AF drive. Manual-focus override is by simply turning the dedicated focus ring at the front of the lens. This is the same configuration of focus ring at the front, zoom ring in the middle and multi-function ring close to the camera as on the Z 24-70mm f2.8 S – which is very convenient. Only the Z 70-200mm f2.8 VR S has the zoom ring at the front which makes it easier to hold the long tele-photo zoom lens stable while operating the zoom. The focus ring cannot be re-assigned another function nor can it be switched off. It has a variable gearing (like all AF Z-Nikkors so far) which allows for very precise manual focus when turned slowly but cannot be switched to linear gearing. Which makes smooth focus pulling for videographers pretty hard. Focus on the F-Nikkor works differently as it has a direct linear mechanical coupling between the focus ring and the focus action. The Z 14-24mm f2.8 S also has an extra button on the lens which can be assigned many different functions e.g. AF-lock. [+]

Display: The Nikon Z 14-24mm f2.8 S is now the fourth Z-Nikkor to feature an OLED display indicating focal length, aperture or focusing distance (in m or ft.) and depth-of-field. The display is hard to read under sunny conditions in its default setting but it can be made as bright as the top display on the Z7. You can switch through the different display types using the DISP-button. See the images below which are from the Nikon Z 24-70mm f2.8 S sporting the same panel. The F-Nikkor only offers the usual distance markings that normally come with lenses designed for DSLRs. The Z 14-30mm f4.0 S does not have a display. [+]

Lens profile: The new Z-Nikkor comes with a lens profile which can be controlled from the camera. Vignette control offers the usual options of High, Normal, Low and Off. Diffraction compensation can be activated or deactivated. Not sure if the same holds true for auto distortion control – the Z 14-30mm f4.0 S doesn’t allow that to be switched off. The F-Nikkor does not come with a lens profile but Lightroom and Photoshop provide one with vignette and distortion control. [+]

Covers full frame/FX or smaller. Same with the other two lenses. [+]

The lens comes with a pouch that’s just as flimsy as the pouch of the other Z lenses (except for the Z Noct) and has no strings to pull it close. So if you put the lens in your bag it might easily slip out of its pouch and bang around unprotected. This is a cheap solution for a lens costing well north of 2000 EUR/USD. The lens comes with two lens hoods (plus two front caps) which is unique as far as I know. One is a very short one, the other has a pretty large diameter to accommodate 112mm filters (see image below). Both lock in place to avoid accidentally falling off and are reversible for transport. Both lens caps can be mounted in only two positions. The F-Nikkor has a much nicer padded lens case and its lens hood is built-in with a cover that slides over the lens hood and is kept there by friction alone. [0]

Aperture ring: the nifty multi-function control ring at the back of all Z-Nikkor zoom lenses can be assigned to operate the aperture (which is the default), exposure compensation, or ISO sensitivity – or simply switched off. The function assigned to the ring can be set differently at different types of lenses – quite clever! The F-Nikkor has no aperture ring. [+]

Sealing: yes, a rubber grommet at the lens-mount plus further special weather-sealing throughout the construction, just like the F-Nikkor and the Z 14-30mm f4.0 S. [+]

The score in the “features-department” is 0[-]/6[0]/8[+] The new Nikon Z 14-24mm f2.8 S is a relatively compact and light lens for an f2.8 ultra-wide zoom and comes with a nice feature set. Most disappointing is perhaps that it does not reach below 14mm or further than 24mm or that the front filter needs to be a huge and expensive 112mm affair.

Currently the Nikon Z 14-24mm f2.8 S is the only ultra-wide zoom lens with a large f2.8 focal ratio available in Z-mount. So you either make do with a slower Z-mount lens, wait until Sigma and Tamron solve the mysteries of Nikon’s Z-mount communication, or use F-mount lenses via Nikon’s FTZ adapter adding 30.5mm in length and 133g in weight:

Focus accuracy and repeatability is critical to consistently produce sharp shots. Repeatability (the accuracy of focus on the same subject after repeated focus-acquisition) of this lens at 24mm focal length is very good (measured 99.6% in Reikan FoCal) with no outliers over a series of 40 shots. There is also no focus variation whether the lens focuses from a closer distance or from infinity and I didn’t encounter hunting. At 24mm focal length the lens focuses super fast in around 0.2 sec from infinity to 0.35m (1:10 magnification), while the AF-S 14-24mm f2.8G on a Z7 (via FTZ adapter) needs 0.5 sec.

The zoom ring is located at the middle of the lens and turns through 70 degrees. It has a 19mm wide rubber surface with a good grip. It can hardly be operated with one finger as it needs more force than the AF-S 14-24mm f2.8G. The lens control ring is only 8mm wide and is located close to the camera. It has no rubberized surface but moves very smooth and can easily be operated even with your pinky. The focus ring at the front is 13mm wide, moves smoothly, and also has a rubberized surface – a welcome deviation over the metal surface on the Z 24-70mm f2.8 S.

AF-operation produces a slight noise which can be heard from the outside when shooting photos. If you record video the built-in microphone also picks up a faint sound from the AF-drive. Controlling the aperture from the control ring on the lens does not produce any noise.

Nikon’s newest zoom lens is parfocal: When I focused the lens at 24mm and zoomed back to 14mm focus stays on the same spot. The lens seems to be optically designed to do so as the typical small deviations and subsequent corrections of the focus know from the Z 14-30mm f4.0 S are not visible with the new lens. The F-Nikkor is not parfocal.

Check prices on the Nikon Z 14-24mm f2.8 S at B&H, Adorama or WEX! Alternatively get yourself a copy of my In Camera book or treat me to a coffee! Thanks! 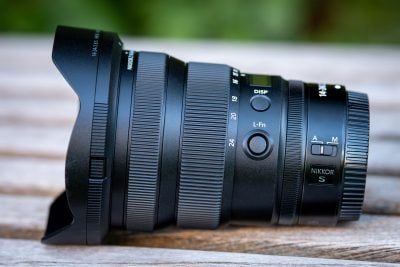 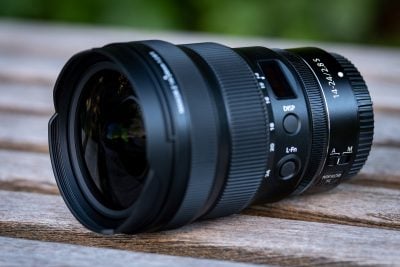 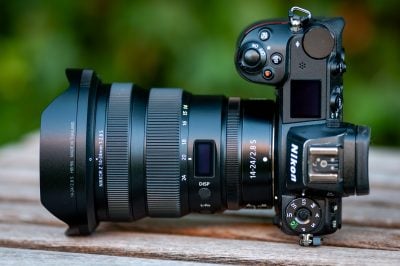