The Nikon Z 24-70mm f4S is a no-brainer for owners of Z-series mirrorless bodies: optically it is as good as the renowned 24-70mm f2.8E VR with a one stop advantage in image stabilization and almost no loCA. It also delivers very usable close-up performance and retains its high contrast even in contra-light situations. Plus by being roughly half the size and weight it's much more portable and a perfect match for the compact Z-series bodies it's designed for. The new Z Nikkor also focuses as fast and reliably and is sealed as thoroughly as the 24-70mm f2.8E VR. The only drawback of the Z 24-70mm f4S is its relatively ordinary f4.0 focal ratio, but that's easily compensated for by the relatively low price - and did I mention the small size and weight?. So if you're getting a new Z body, be sure to bag yourself this excellent zoom in a kit bundle: Highly Recommended!

Check prices on the Nikon Z 24-70mm f4S at Amazon, B&H, Adorama, or Wex. Alternatively get yourself a copy of my In Camera book or treat me to a coffee! Thanks!

The Nikon Z 24-70mm f4S is a small and light non-stabilized standard zoom lens with a constant f4.0 focal ratio that’s designed for Nikon’s new Z-mount full-frame cameras. Announced in August 2018 it joins the Z 35mm f1.8S as the first Z-series lenses on the market; the Z 50mm f1.8S will be the third at end of 2018. Nikon’s Z-lenses may be the only models currently available with a native Z-mount but thanks to Nikon’s FTZ adapter, existing F-mount lenses can easily be used on their new Z bodies. So the new Z 24-70mm f4S faces competition from other standard zooms with the F-mount, most notably Nikon’s own AF-S 24-70mm f2.8E VR which is the benchmark of 24-70mm zoom for Nikon cameras.

As the Z 24-70mm f4S is a member of Nikon’s high-end “S” line it is expected to perform on a very high level. That said, Nikon is pricing it competitively at 1099 EUR when bought alone, or a bargain 600 EUR when bought in a kit with a Z body. Compare this to the 2150 EUR for the AF-S 24-70mm f2.8E VR. This can in part be explained by the one stop slower focal ratio of the new Z lens and its lack of optical stabilization (deemed unnecessary here as it’s built into the Z bodies), but it still represents good value, particularly in a kit. Side note: with a focal ratio of f4.0 it is the only available 24-70mm f4 zoom for Nikon full-frame bodies – and easily the smallest and lightest, playing to the strengths of Nikon’s new mirrorless Z system. 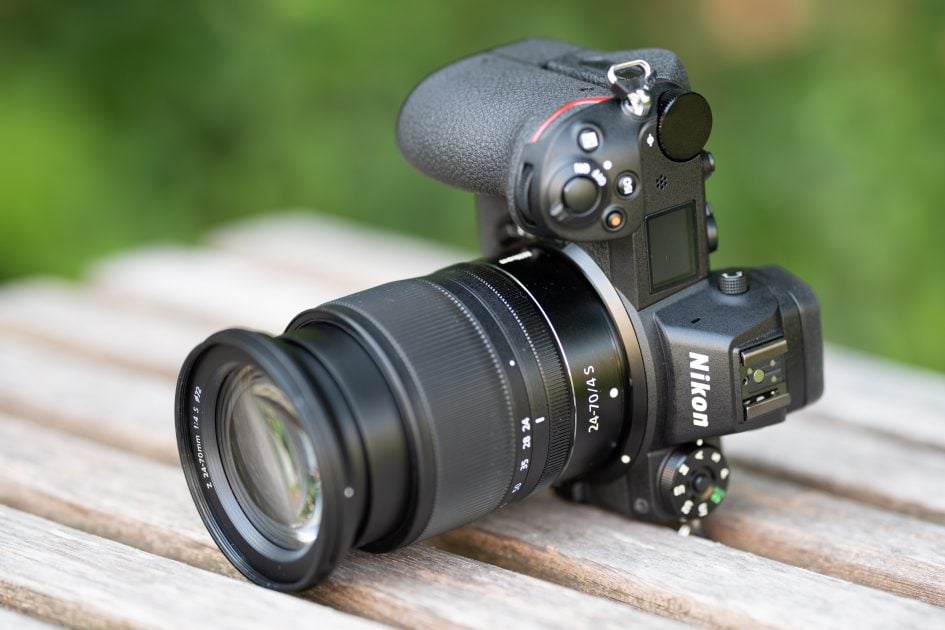 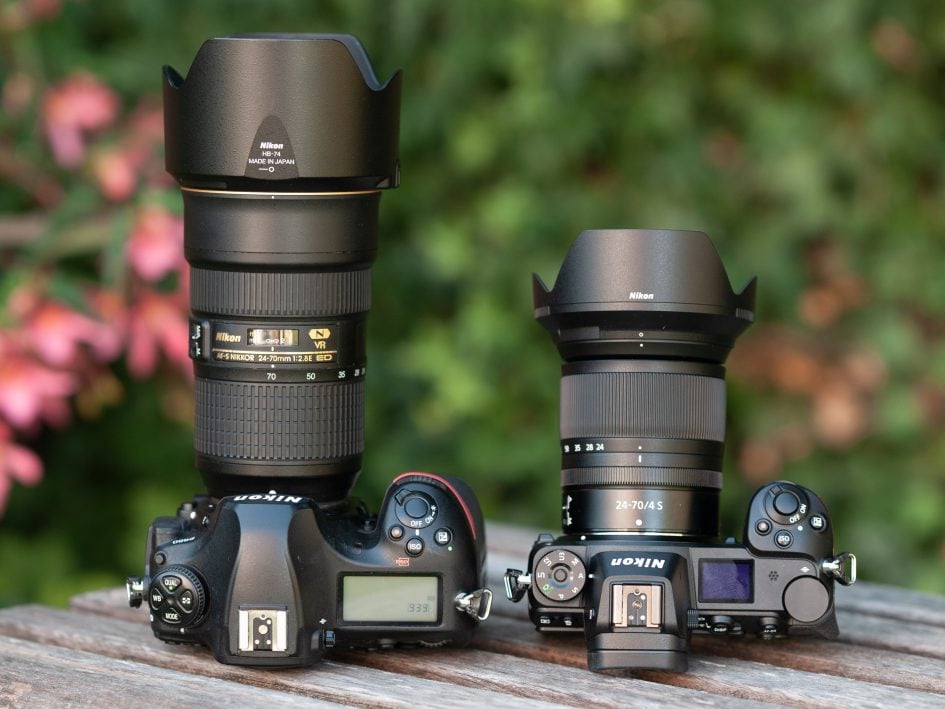 Optics: 14 elements (including 2 special dispersion and 3 aspherical elements) in 11 groups vs. 20/16 for the Nikon 24-70mm f2.8E VR. So the new Z lens has substantially less glass/air surfaces which is always a good thing to reduce the chances for reflections. Both lenses employ fluorine coating on the front to repel water, dust, and dirt and should make for easier cleaning and use Nikon’s Nano-coating to reduce flare, glare and ghosting. [+] 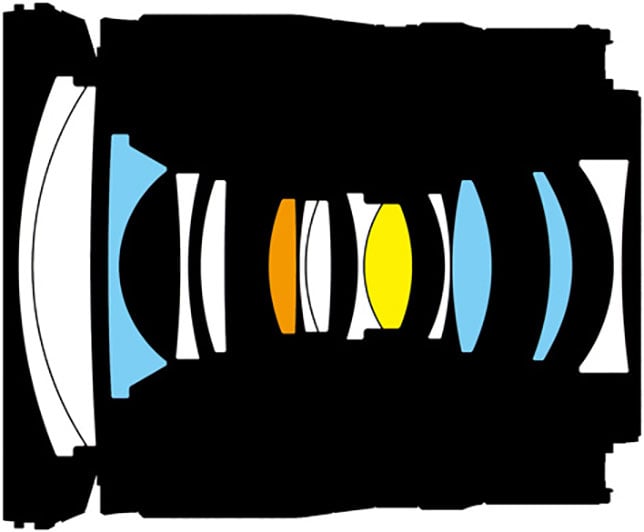 Auto focus: Yes with built-in AF drive. Manual-focus override is by simply turning the focus ring – if you didn’t assign another operation to this multi-function ring. The focus ring has a variable gearing that allows for very precise manual focus when turned slowly. Unfortunately this feature cannot be switched to linear gearing which makes smooth focus pulling for videographers almost impossible. Focus on the Nikon 24-70mm f2.8E VR works similarly with the only differences being a linear gearing and that the focus ring does only that: focusing. [+]

Comes with a soft pouch and the lens hood is included, reversible for transport. That’s similar to most other lenses. But the Nikon 24-70mm f2.8E VR has a much nicer padded lens case and its lens hood locks in place to avoid accidentally falling off. [0]

Aperture ring: the multi-function control ring of an S-lens can be assigned to operate the aperture, exposure compensation, ISO or focus. It automatically falls back to its customary focus control when the lens is switched to manual focus. Although the lens control ring has not the same benefit as having a focus ring plus a dedicated aperture ring on the lens it gives you more flexibility to control one of the more important shooting parameters directly from a nice ring on the lens. The aperture is actuated electromagnetically which makes it the equivalent of a modern E-type Nikon lens and puts away with the mechanical coupling that Nikon uses on all older lenses . The Nikon 24-70mm f2.8E VR also uses electro-magnetic actuation but has no aperture control ring. [+]

Sealing: yes, a rubber grommet at the lens-mount plus further special weather-sealing throughout the construction, just like the 24-70mm f2.8E VR. [+]

The score in the “features-department” is 0[-]/2[0]/11[+]. So the lens has a very good feature set – if you accept its focal ratio of f4.0. But that certainly is the enabler to make the lens much smaller and lighter than the alternatives. It offers the nifty feature of the multi-purpose control ring and is sealed against the weather like its bigger sibling, the professional grade Nikon 24-70mm f2-8E VR. And surprisingly for a member of Nikon’s new “S”-line it also comes at a very good price if you simply buy it in a kit with the new Nikon Z7 body. 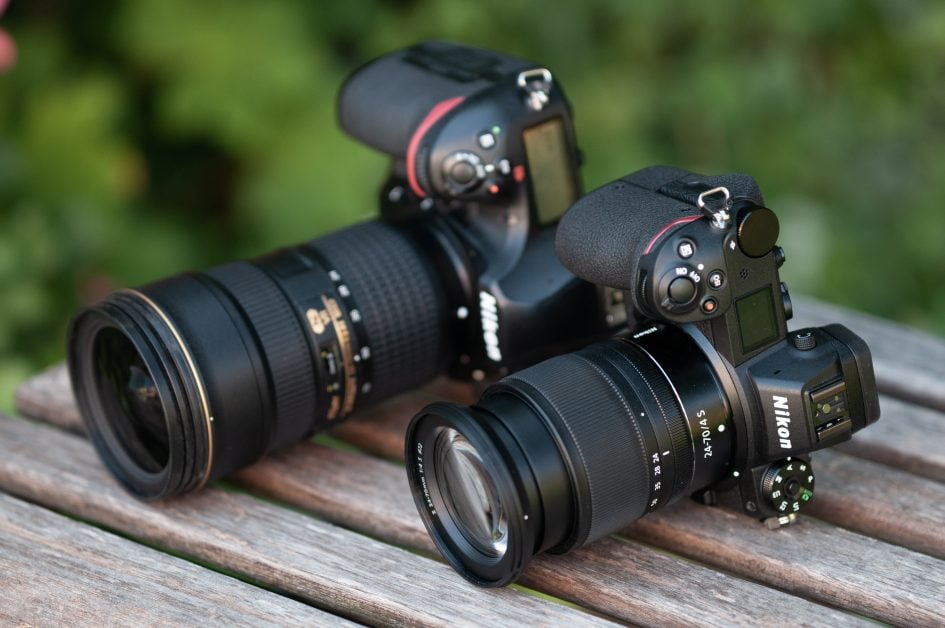 The market for full-frame 24-70mm zooms is pretty crowded but no other manufacturer offers a small and light f4.0 version for Nikon bodies (mirrorless or DSLR) that competes directly with Nikon’s new Z 24-70mm f4S:

Focus accuracy and repeatability is critical to consistently produce sharp shots. Repeatability (the accuracy of focus on the same subject after repeated focus-acquisition) of this lens at 70mm focal length is very good (measured 99.1% in Reikan FoCal) with no outliers over a series of 40 shots. There is no focus variation whether the lens focuses from a closer distance or from infinity and I didn’t detect any hunting. At 70mm focal length the lens focuses in around 0.35 sec from infinity to 0.8m (1:10 magnification), which is as fast as the very fast AF-S 24-70mm f2.8E ED VR on a D850 or a Z7 (via FTZ adapter).

The zoom ring turns through 55 degrees the way Nikon users are used to and has a 28mm wide rubber surface with a good grip. It turns pretty stiff and can hardly be operated with one finger. The focus/control ring is only 8mm wide and is located closer to the camera. It has no rubberized surface but moves super smooth and can easily be operated even with your pinky. 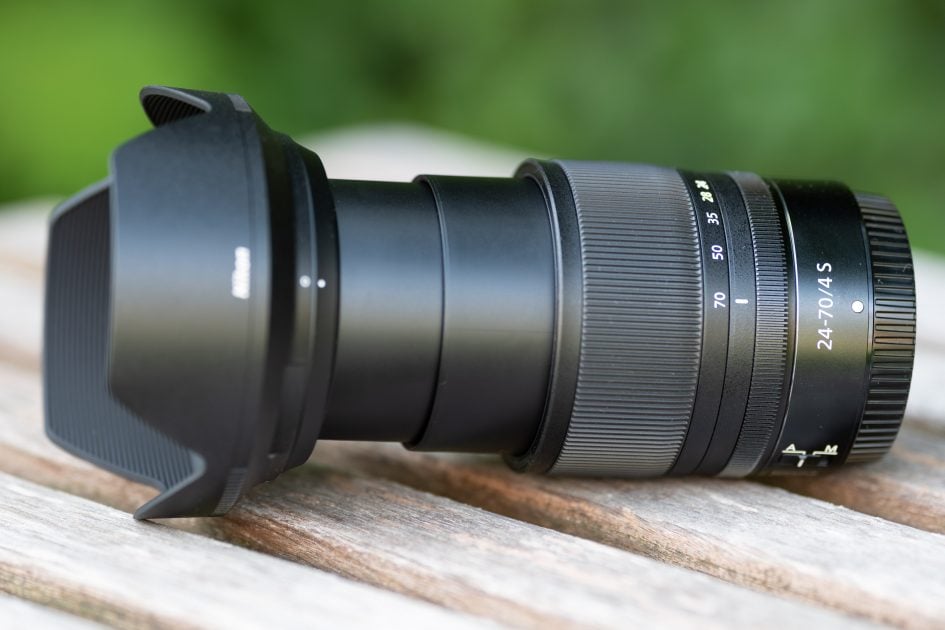 AF-operation of the new lens and image stabilization of the Z7 is inaudible from the outside. If you record video with the built-in microphone the AF-drive produces only a very slight noise. Plus you can control the aperture smoothly and without noise from the control ring on the lens. This is the quietest AF/IS/aperture operation I’ve ever encountered on a Nikon body so far. Mount the Nikon 24-70mm f2.8E VR via the FTZ adapter and you notice a huge difference in noise.

To test the effectiveness of the image stabilization with the Nikon Z 24-70mm f4S on a Z7 body, I did a series of 140 test-shots hand-held at 70mm focal length. I tested with shutter speeds from 1/80 of a second down to 0.4 sec. Shots at 1/80 sec with VR=OFF are used as reference of how good my hand-holding was at the time of the test and Reikan FoCal did the chore of evaluating the sharpness of all shots. Here’re the details: With VR=ON (in camera) the combo produced results down to 1/5 sec (4 stops) which were better or at least comparable to 1/80 sec with VR=OFF. At 0.4 sec there were 30% clearly blurred images. This is a 4-5 stop advantage from stabilization.

I also tested the Nikon 24-70mm f2.8E VR via the FTZ adapter on the Z7. In earlier tests on a D810 the lens produced a 3-4 stop advantage from its built-in VR and I was curious how a stabilized F-mount lens profits from the additional roll compensation that the Z7 body provides in a test set-up that was identical to the one above. The results: The image stabilization was slightly better than from the Z 24-70mm f4S + Z7 combo down to 1/10 sec (3 stops) but had 20% misses at 1/5 sec and 60% misses at 0.4 sec. This is a 3-4 stop advantage from stabilization. That may not seem better than from my earlier test on the D810 but on the Z7 the results were very sharp down to 1/10 sec more consistently than on the D810. It looks like the additional roll compensation from the Z7 has a positive effect on the image stabilization of adapted F-lenses. 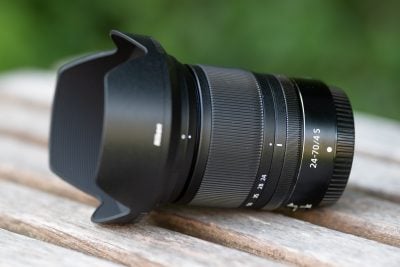 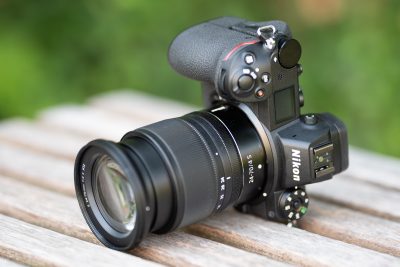 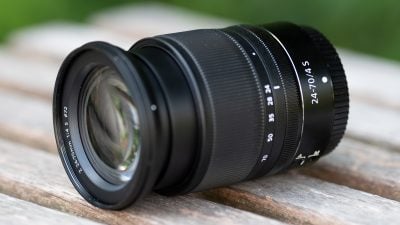