The Nikon Z 24-200mm f4.0-6.3 VR is a clever alternative to the Nikon Z 24-70mm f4.0 S. It may lack about one stop light gathering power once you zoom beyond 50mm focal length but the versatility of the lens reaching beyond 70mm up to 200mm is not to be underestimated. And it is almost as small and light as the Nikon Z 24-70mm f4.0 S, shows very decent performance over its zoom range, has usable close-up capabilities, and offers a very effective image stabilization at the long end. This makes the Z 24-200mm f4.0-6.3 VR look like a prime candidate for those who want to travel light and not change lenses in the middle of things. It may not be the sharpest lens in the extreme corners but other than that Nikon has designed a compelling super-zoom which clearly earns a recommendation!

Check prices on the Nikon Z 24-200mm at B&H, Adorama or WEX! Alternatively get yourself a copy of my In Camera book or treat me to a coffee! Thanks!

The Nikon Z 24-200mm f4.0-6.3 VR is the first super-zoom designed for Nikon’s mirrorless cameras with Z-mount and corrected for full-frame sensors. Announced in February 2020, there’s no exact predecessor in Nikon’s F-mount line-up to the new Z-mount lens: Nikon has the AF-S 24-120mm f4.0G ED VR and the AF-S 28-300mm f3.5-5.6G ED VR for their full-frame DSLR cameras. But if you’re coming from a Nikon DX camera and liked the zoom-range of their AF-S DX 18-140mm 3.5-5.6G ED VR the new Z 24-200mm f4.0-6.3 VR covers a similar range on a Nikon full-frame Z camera with an 8 degree wider view on the short end. Together with the not yet available Z 70-200mm f2.8 VR S it’s also the first full-frame Z Nikkor to reach beyond 85mm focal length and to have an optical image stabilization. This makes the new 24-200mm lens also well suited for Nikon’s mirrorless cameras which do not have sensor-based image stabilization like the Z50.

But the Z 24-200mm f4.0-6.3 VR is also the first full-frame Z-Nikkor without the “S” in its name signaling that its optical performance is not quite up there with Nikon’s “S” lenses. In my review of this lens I had a very close look at how good (or bad) Nikon’s new zoom lens really is. So if you’re interested in how Nikon’s first super-zoom for their Z system performs, you’ve come to the right place! PS – if you’re interested in the other Z lenses mentioned above check out my in-depth Nikon Z 14-30mm f4.0 S review and Nikon Z 24-70mm f4.0 S review.

Optics: The Z 24-200mm has 19 elements in 15 groups including 2 special dispersion elements and 3 aspherical elements and employs Nikon’s latest ARNEO coating. The Tamron is of a similarly complex construction. The Z 24-70mm f4.0 S is a simpler design with 14 elements in 11 groups. [+]

Auto focus: The new Z 24-200mm comes with built-in AF drive. Manual-focus override is by simply turning the control ring at the back of the lens – if you didn’t assign another operation to this multi-function ring. The ring has a variable gearing (like Nikon’s other AF Z-Nikkors) which allows for very precise manual focus when turned slowly but cannot be switched to linear gearing. Which makes smooth focus pulling for videographers almost impossible. Same for the Tamron except that the focus ring does just that: focusing. [+]

All three lenses in this comparison cover full frame sensors or can equally be used on a cropped APS-C/DX camera body: the Z 24-200mm on a Z50 is equivalent to a 36-300mm zoom lens on a full-frame camera body. [+]

The Z 24-200mm comes with a flimsy pouch without strings to pull it closed and the lens hood is included, reversible for transport. Same for the Z 24-70mm f4.0 S. The Tamron comes without pouch. [0]

Aperture ring and other control elements: the multi-function control ring of a Z-Nikkor can be assigned to operate the aperture, exposure compensation, ISO or focus. It automatically falls back to its customary focus control when the camera is switched to manual focus. Although the lens control ring has not the same benefit as having a focus ring plus a dedicated aperture ring on the lens it gives you more flexibility to control one of the more important shooting parameters directly from a nice ring on the lens. The Tamron’s secondary ring is for manual focus only. The Z 24-200mm and the Tamron have a switch to lock the zoom at its shortest focal length but no other switches. Only the Z 24-70mm f4.0 S has an AF/MF switch. [+]

Sealing: both Z-Nikkors have a rubber grommet at the lens-mount plus further special weather-sealing throughout the construction, just like the Tamron. Both the Z-Nikkor and the Tamron also have fluorine-coating on the front element to repel water, dust, and dirt and make cleaning easier. [+]

The score in the “features-department” is 1[-]/2[0]/11[+] which makes the new Nikon Z 24-200mm f4.0-6.3 VR a well equipped lens. On the plus side is its small size and low weight plus a very useful magnification in close-up shooting at a decent working distance. Its optical image stabilization should prove helpful when shooting at longer focal lengths. It also offers the nifty feature of the multi-purpose control ring and is sealed well against the elements. Its only drawback is the lowly focal ratio. Tamron has shown that you can design a light and compact all-in-one zoom with more light-gathering power.

Currently there’s no alternative for the Z 24-200mm zoom available in Nikon’s Z-mount. So you have to either make do with a shorter focal range or use F-mount lenses via adapter adding to the size and weight of the combo.

As you can see, none of the alternatives above covers the same focal range as the new Z-Nikkor. Here is the angle of view that the new Nikon Z 24-200mm f4.0-6.3 VR covers with its 8.3x zoom compared to the coverage of other zoom lenses:

The difference between lenses starting at 24mm and those starting at 28mm is clearly visible and might be a decisive factor for choosing a zoom lens. Not always can you step back with a 28mm lens to get the wider view of a 24mm lens. And the other thing of note: The benefit of reaching 300mm is perhaps not as big as expected. If the image at 200mm is sharp enough, cropping a 45MP shot at 200mm to match the angle-of-view of a 300mm still nets you around 20MP. This might well be enough for the intended purpose.

Focus accuracy and repeatability is critical to consistently produce sharp shots. In my test I found that the repeatability (the accuracy of focus on the same subject after repeated focus-acquisition) of the new Nikon at 200mm focal length is very good (measured 98.8% in Reikan FoCal) with no outliers over a series of 40 shots and there is no focus variation whether the lens focuses from a closer distance or from infinity. At 200mm focal length the lens focuses in around 0.5 sec from infinity to 2.04 m (1:10 magnification), which is a bit faster than the Tamron 28-200mm which takes around 0.6 sec.

The zoom ring turns through 90 degrees and has a 41mm wide rubber surface with a good grip. It turns with quite some resistance and can not be operated with one finger. The lens still shows a little zoom creep but the zoom lock at 24mm can prevent that. The lens control ring is like with all Nikon Z zoom lenses so far: 8mm wide, located 20mm in front of the flange, and moves super smooth.

AF-operation and image stabilization of the new lens is inaudible from the outside or if you record video with the built-in microphone.

As you pull focus, you’ll notice some focus breathing: the image becomes a little more magnified at closer focusing distances. When I adjusted the focus from infinity to 2.04m on the new Nikon at 200mm focal length, I measured a 1% increase in magnification. This is hardly visible and should please videographers. The same test at 24mm focal length produced less than 1% decrease. The Tamron exhibits similarly insignificant focus breathing.

I also tested whether Nikon’s newest zoom lens allows you to change the focal length without altering its focus. This characteristic is called parfocal. I focused the lens at 200mm and then slowly zoomed back checking focus on the way. The Z 24-200mm f4.0-6.3 VR did keep its focus, but not quite perfect: the lens became gradually less sharp and then suddenly snapped back into perfect focus. See the following 100% crops:

Obviously this zoom lens is not optically designed to be parfocal but Nikon implemented a control curve to compensate for the effects of zooming on focus. The implementation of this perfectly valid idea might be good enough for videographers filming at lower resolutions. But for shooting high resolution photos the old rule still applies: When you change focal length (even a tiny bit), re-focus! Btw.: The other Z zooms so far work the same way.

As this was the first optically stabilized Z-Nikkor I tested I was curious how effective the combined stabilization from the lens and the Z7 camera body are. To that end I did a series of 600 test-shots hand-held at 200mm, 70mm and 24mm focal length and tested with shutter speeds from 1/200, 1/80 and 1/25 of a second down to 1.3 sec. I used the shots at the shortest shutter speed with image stabilization (VR) off as reference of how good my hand-holding was at the time of the test and Reikan FoCal did the chore of evaluating the sharpness of all shots.

Here’s the results for 200m focal length first: With VR=on the combined stabilization from lens and camera produced results down to 1/13 sec (4 stops) which were clearly better as at 1/200 sec with VR=off. At 1/6 sec (5 stops) results became less consistent but two out of three images were still very sharp. At 1/3 sec (6 stops) results became quite erratic but 50% of the images could still be used for smaller output sizes. This is the best advantage from VR I’ve seen so far in my tests and supports Nikon’s claim of 4.5 stops. The non-stabilized Tamron 28-200mm f2.8-5.6 Di III in comparison achieved only 3 stops of stabilization from a Sony A7R II camera body. 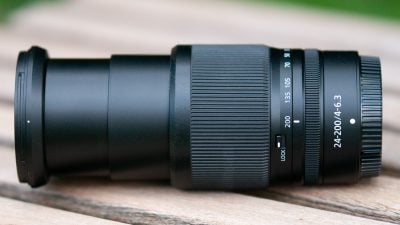 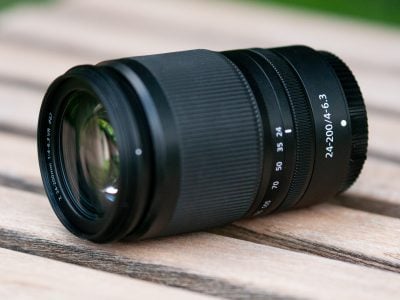