The Nikon Z 24-70mm f2.8 S is a general-purpose zoom designed for Nikon’s full-frame Z-series mirrorless cameras and offers a one stop faster focal ratio than the Z 24-70mm f4.0 S 'kit zoom'. It performed very well in all of my tests regarding contrast, resolution, focus speed and reliability, colour aberrations, and coma, producing very good image quality on a demanding 46MP Z7 body. It is equipped with a useful OLED display, a dedicated focus ring (in addition to the multi-function ring), and a customizable function button, plus the lens is well-sealed against the elements. What’s not to like? Well, the Z 24-70mm f2.8 S is an expensive lens, clearly bigger and 300g heavier than its smaller sibling, the Z 24-70mm f4.0 S. So is it worth spending the extra and accommodating the heft, and while we’re it at, is it also the rightful successor to Nikon's professional F-mount workhorse, the 24-70mm f2.8E VR? I'd say "Yes" on both accounts. The Z 24-70mm f2.8 S delivers the highest optical quality including the best Bokeh and very usable close-up performance in a package that is smaller and lighter than the f2.8E VR and has the decisive advantage of a one stop larger focal ratio over the f4.0 S. So if you want the best 24-70mm zoom for your Nikon Z bodies, get the new Z 24-70mm f2.8 S: it comes Highly Recommended!

Physically, the Z 24-70mm f2.8 S is a departure from the initial native zooms in the series. Not only is it the first with an f2.8 focal ratio, but it also dispenses with the retracting barrel mechanism of the f4 zooms. It’s also the first Z lens to feature a dedicated manual focusing ring in addition to a separate custom ring, as well as a customizable function button and an OLED display, the latter indicating focal length, aperture, focusing distance and depth-of-field in a similar way to the Zeiss Batis lenses. The Z 24-70mm f2.8 S is understandably heftier than the f4 models but it’s still shorter as well as 25% lighter than the existing DSLR version, the AF-S 24-70mm f2.8E ED VR. 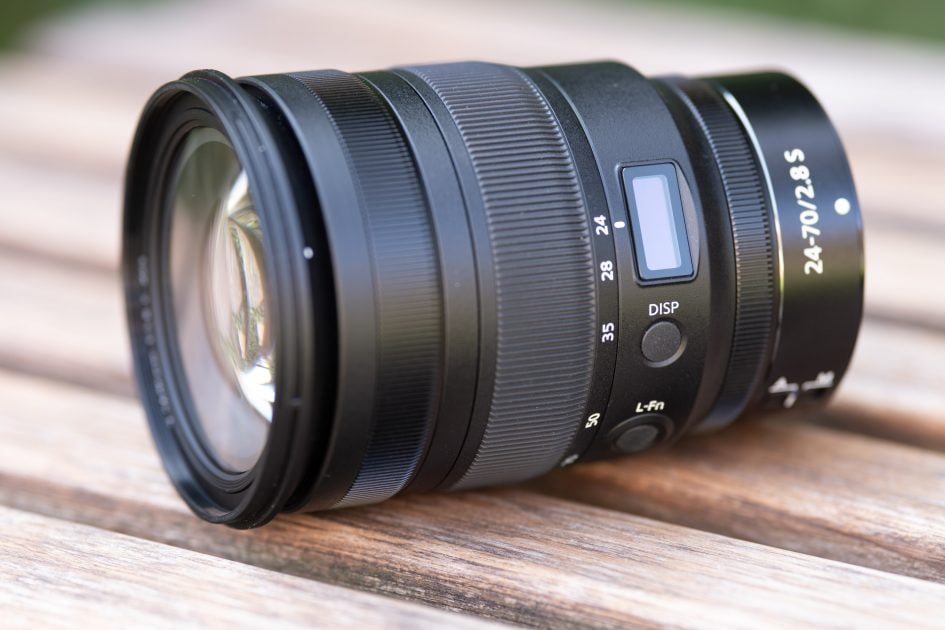 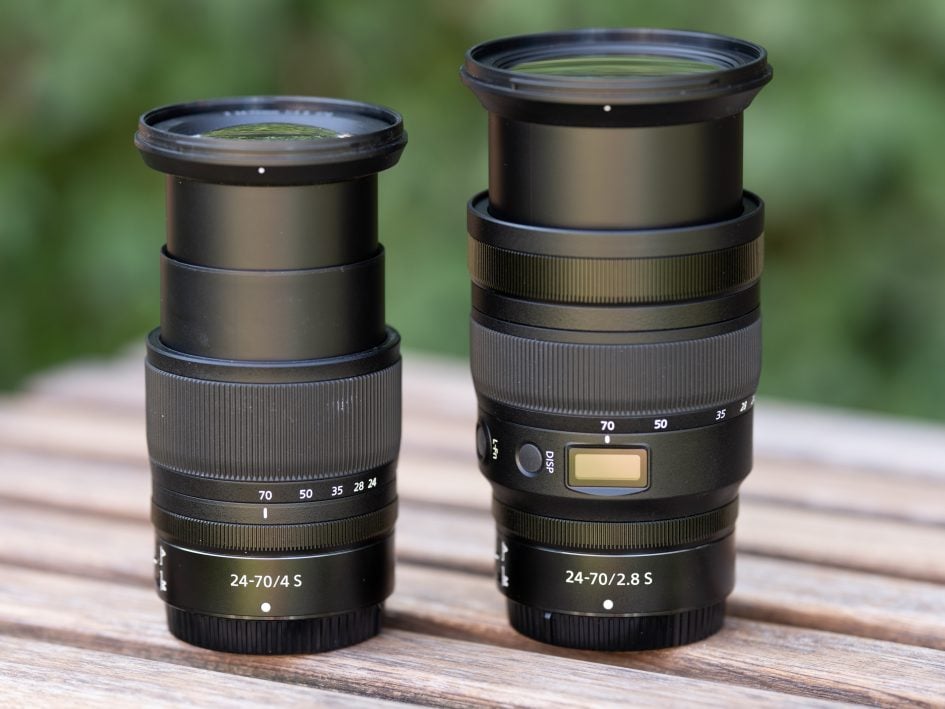 Optics: The lens is a pretty complex design with 17 elements (including 2 special dispersion elements and 4 aspherical element) in 15 groups. That makes 30 glass/air surfaces where reflections can cause problems. The f4.0S has 14 elements in 11 groups vs. 20/16 for the f2.8E VR. All three lenses use Nikon’s Nano-coating to reduce flare, glare and ghosting but only the new Z 24-70mm f2.8 S profits from a new “ARNEO” anti-reflective coating. Nikon employs fluorine coating on the front and back of all three lenses to repel water, dust, and dirt and should make for easier cleaning.  [+] 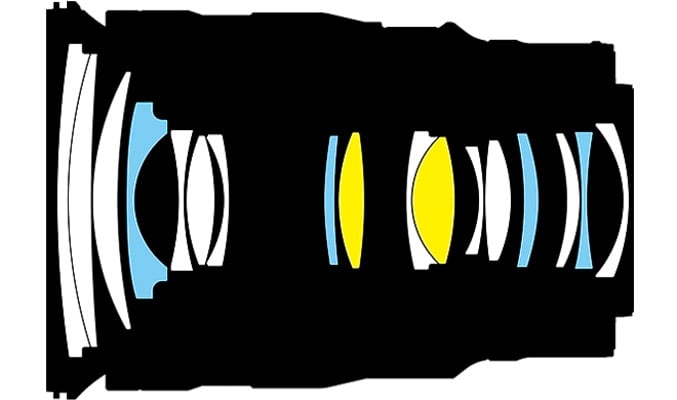 Auto focus: Yes with built-in AF drive. Manual-focus override is by simply turning the dedicated focus ring at the front of the lens. The ring cannot be re-assigned another function nor can it be switched off – which is a pity as you might accidentally de-focus the lens. The focus ring has a variable gearing that allows for very precise manual focus when turned slowly. Unfortunately this feature cannot be switched to linear gearing which makes smooth focus pulling for videographers almost impossible. The Nikon Z 24-70mm f2.8 S is the first Nikon Z lens to feature an OLED display indicating focal length, aperture or focusing distance (in m or ft.) and depth-of-field. The display is hard to read under sunny conditions in its default setting but it can be made as bright as the top display on the Z7. You can switch through the different display types using the DISP-button.

There’s also a function button L-Fn on the lens that is set to AE/AF lock as default but can be assigned 21 different functions. On the f4.0S focusing works the same except that it is done with the multi-function ring at the back of the lens  – if you didn’t assign another operation to this ring. There’s also no OLED display or L-Fn button on the f4.0S. Focus on the f2.8E VR works differently as it has a direct linear mechanical coupling between the focus ring and the focus action. It also offers the distance markings that normally come with lenses designed for DSLRs and the focus ring does only that: focusing. [+]

The lens comes with a pouch that’s just as flimsy as the pouch of the other Z lenses and has no strings to pull it close. So if you put the lens in your bag it might easily slip out of its pouch and bang around unprotected. This is simply unacceptable for a lens costing north of 2000 EUR/USD. The lens hood is included and locks in place to avoid accidentally falling off plus it is reversible for transport. Plus it is coated like black velvet on the inside to reduce reflexes. The f2.8E VR has a much nicer padded lens case and its lens hood also has a lock. The lens hood of the f4.0S has no lock. [0]

Aperture ring: the multi-function control ring at the back of the f2.8S can be assigned to operate the aperture (this is the default) or exposure compensation. The aperture is actuated electromagnetically which makes it the equivalent of an E-type Nikon lens like the f2.8E VR and puts away with the mechanical coupling that Nikon uses on all older lenses. The multi-function control ring on the f4.0S can control aperture, exposure compensation or focusing. The f2.8E VR has no aperture ring. [+]

Sealing: yes, a rubber grommet at the lens-mount plus further special weather-sealing throughout the construction, just like the f4.0S and the f2.8E VR. [+]

The score in the “features-department” is 0[-]/6[0]/7[+]. The lens is smaller and lighter than its F-mount equivalent and sports a complete set of controls and a nifty OLED display. Initially it may be a bit more expensive than Nikon’s 24-70mm f2.8E VR but that was to be expected. But especially in light of the asking price the laughable lens pouch is the biggest disappointment. 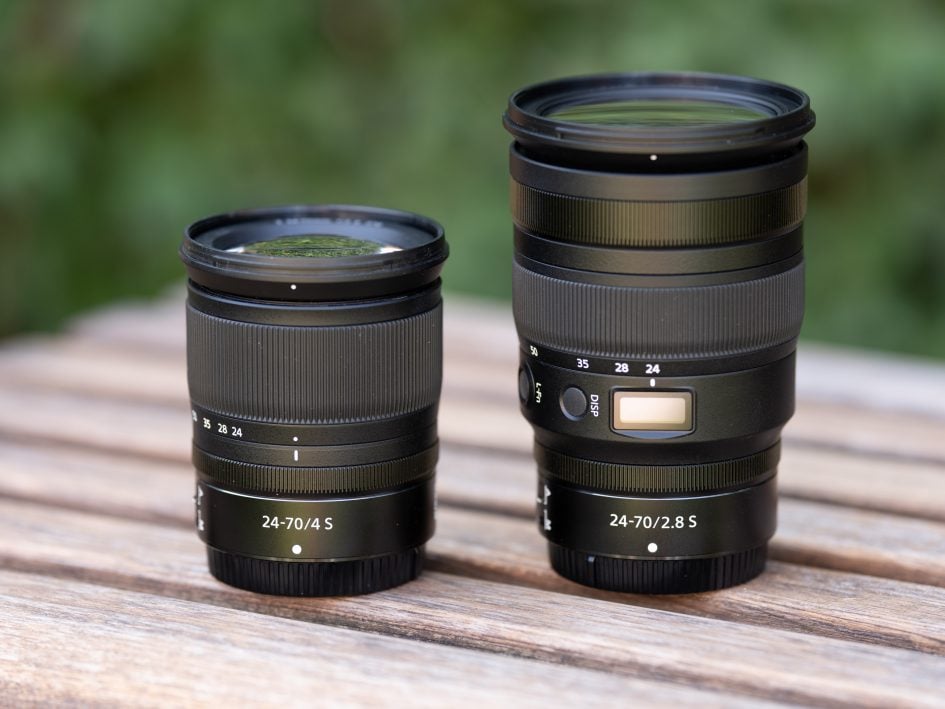 The market for full-frame 24-70mm zooms is pretty crowded but no other manufacturer offers a version for Nikon mirrorless Z bodies yet. So the alternative is either Nikon’s Z 24-70mm f4.0 S or to use other lenses via Nikon’s FTZ adapter adding 30.5mm in length and 133g in weight:

Focus accuracy and repeatability is critical to consistently produce sharp shots. Repeatability (the accuracy of focus on the same subject after repeated focus-acquisition) of this lens at 70mm focal length is very good (measured 99.3% in Reikan FoCal) with no outliers over a series of 40 shots. There is no focus variation whether the lens focuses from a closer distance or from infinity and I didn’t detect any hunting. At 70mm focal length the lens focuses in around 0.5 sec from infinity to 0.77m (1:10 magnification), which is a little slower than the very fast Z 24-70mm f4.0 S or the AF-S 24-70mm f2.8E ED VR on a D850 or a Z7 (via FTZ adapter).

The zoom ring turns through 85 degrees the way Nikon users are used to and has a 21mm wide rubber surface with a good grip. It turns pretty stiff and can hardly be operated with one finger. The lens shows some zoom creep beyond 50mm focal length. The lens control ring is only 8mm wide and is located closer to the camera. It has no rubberized surface but moves super smooth and can easily be operated even with your pinky. The focus ring is 12mm wide, located at the front of the lens, and moves smoothly. 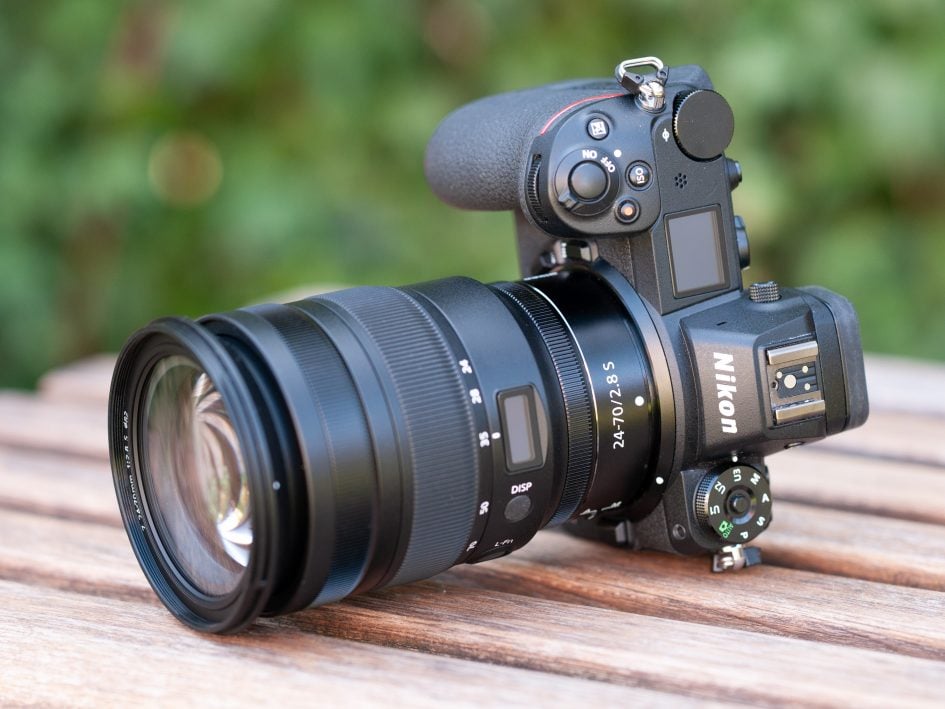 AF-operation of the new lens and image stabilization of the Z7 is inaudible from the outside. If you record video with the built-in microphone the AF-drive produces only a very slight noise only a little louder than from the Z 24-70mm f4.0 S. Plus you can control the aperture smoothly and without noise from the control ring on the lens.  Mount the Nikon 24-70mm f2.8E VR via the FTZ adapter and you notice a huge difference in noise.

I also tested whether Nikon’s newest zoom lens allows you to change the focal length without altering its focus. This characteristic is called parfocal. I manually focused the lens at 70mm and then slowly zoomed back to 24mm checking focus on the way. The Z 24-70mm f2.8 S did keep its focus but not quite perfect: when zooming back the lens became gradually less sharp and then suddenly snapped back into perfect focus. See the following 100% crops shot at f4.0 and a focal length of 39mm resp. 38mm without re-focusing:

Obviously this zoom lens is not optically designed to be parfocal but Nikon implemented a control curve to compensate for the effects of zooming on focus. The implementation of this perfectly valid idea might be good enough for videogaphers filming at lower resolutions. But for shooting high resolution photos the old rule still applies: When you change focal length (even a tiny bit), re-focus! Btw.: The Z 24-70mm f4.0 S works the same way. 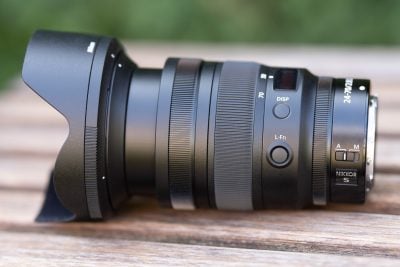 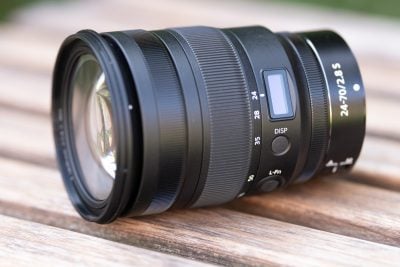 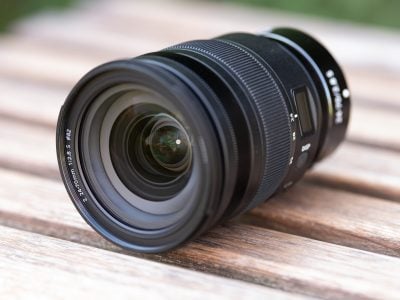