The Nikon Z 70-200mm f2.8 VR S may not be much better than its F-mount predecessor, the Nikon AF-S 70-200mm f2.8E VR. But that is good news: the F-Nikkor was simply the best 70-200mm f2.8 zoom lens for Nikon cameras and still is an excellent lens. Nikon's newest telephoto Z-Nikkor zoom improves slightly on some aspects of the F-Nikkor like FX-corner performance, loCA, focus-shift, focus-breathing, close-up performance. And - more substantially - on image stabilization. It may not be smaller and lighter than the old lens and its Bokeh may be a bit more nervous in some situations. But still: if you want the best 70-200mm zoom for your Nikon Z camera body, get the new Z 70-200mm f2.8 VR S: it comes Highly Recommended - if you can get a good copy!

Check prices on the Nikon Z 70-200mm f2.8 VR S at B&H, Adorama, or Wex. Alternatively get yourself a copy of my In Camera book or treat me to a coffee! Thanks!

Physically, the Z 70-200mm f2.8 VR S is very similar to its F-mount predecessor, the AF-S 70-200mm f2.8E FL ED VR, in size and weight and both lenses do not extend while zooming. The new Z-Nikkor also has additional function buttons which can be assigned AE/AF-lock or AF-on. And it inherits the detachable tripod foot of the F-Nikkor – although the third-party replacements for the foot of the F-Nikkor will not work with the Z-Nikkor. But other features put the new Z 70-200mm f2.8 VR S ahead of its F-mount sibling: It has a customizable function ring which can be assigned to operate the aperture or the ISO or exposure compensation and it features the nifty OLED display which Nikon introduced with its Z 24-70mm f2.8 S lens. It can indicate focal length, aperture, or focusing distance and depth-of-field.

The reason for size and weight of both Nikkor lenses being so similar becomes clearer when looking at the optical construction. The heavy glas elements of the front-end look very similar in both constructions:

Optics: The Nikon Z 70-200mm f2.8 VR S is a pretty complex design with 21 elements in 18 groups including 10 special dispersion elements and 2 aspherical elements. This is similar to the F-Nikkor (22 elements in 18 groups) but with a higher number of special elements. 36 glass/air surfaces create a lot of opportunities where reflections can cause problems. To counter this both lenses employ Nikon’s Nano-coating to reduce flare, glare and ghosting. But only the Z 70-200mm f2.8 VR S profits from the new “ARNEO” anti-reflective coating. Both Nikkors and the Tamron lenses have fluorine-coating on the front element to repel water, dust, and dirt and make cleaning easier. The Sigma has 24 element in 22 groups, the Tamron 23 elements in 17 groups, neither employing aspherical elements. [+]

Filter-thread: 77mm just like the F-Nikkor and Tamron. The Sigma needs 82mm filters. [+]

Auto focus: Yes with built-in AF drive. Manual-focus override is by simply turning the dedicated focus ring at the middle of the lens. The focus ring cannot be re-assigned another function nor can it be switched off. The focus ring has a variable gearing (like all AF Z-Nikkors so far) which allows for very precise manual focus when turned slowly but cannot be switched to linear gearing. Which makes smooth focus pulling for videographers almost impossible. Focus on the F-Nikkor, Sigma and Tamron works differently as they have a direct linear mechanical coupling between the focus ring and the focus action. [+]

Display: The Nikon Z 70-200mm f2.8 VR S is the third Z-Nikkor to feature an OLED display indicating focal length, aperture or focusing distance (in m or ft.) and depth-of-field. The display is hard to read under sunny conditions in its default setting but it can be made as bright as the top display on the Z7. You can switch through the different display types using the DISP-button. See the images below which are from the Nikon Z 24-70mm f2.8 S sporting the same panel. The F-Nikkor, Sigma and Tamron only offer the usual distance markings that normally come with lenses designed for DSLRs. [+]

Additional functions: There are 4 function buttons directly behind the zoom ring one of them designated L-Fn2 plus an additional L-Fn button behind the focus ring on the lens which can be assigned different functions like AE/AF lock. The F-Nikkor has the same 4 buttons behind the zoom ring which can be assigned AF-lock or AF-on. Both lenses also sport a focus-limiter which can prevent the lens to search focus closer than 5m (16ft.) [+]

Covers full frame/FX or smaller. Same with the other alternatives. [+]

The lens comes with a pouch that’s just as flimsy as the pouch of the other Z lenses (except for the Z Noct) and has no strings to pull it close. So if you put the lens in your bag it might easily slip out of its pouch and bang around unprotected. This is simply unacceptable for a lens costing north of 2500 EUR/USD. The F-Nikkor has a much nicer padded lens case and I would have loved to see that case return with the new Z-Nikkor. [0]

The lens hood is included and locks in place to avoid accidentally falling off plus it is reversible for transport. And it is coated like black velvet on the inside to reduce reflexes. The lens has a detachable tripod foot like the F-Nikkor – although the third-party replacements for the foot of the F-Nikkor will not work with the Z-Nikkor. [0]

Aperture ring: the multi-function control ring at the back of the Z-Nikkor can be assigned to operate the aperture (this is the default), exposure compensation, or ISO sensitivity – or simply switched off. The alternatives all have no aperture ring. [+]

Sealing: yes, a rubber grommet at the lens-mount plus further special weather-sealing throughout the construction, just like the other alternatives. [+]

The score in the “features-department” is 0[-]/5[0]/12[+] which makes the new Nikon Z 70-200mm f2.8 VR S look like a well rounded design. The biggest disappointment with this lens perhaps might be that it’s not smaller and lighter than its predecessor, the AF-S 70-200mm f2.8E VR. But if one thing was to be expected it was the diminishing benefit of the shorter flange distance of Nikon’s new Z-mount for longer lenses. Others may point to Canon’s RF 70-200mm f2.8 L IS USM which is an extending design weighing only 1.1kg and being 146mm short at 70mm focal length. But that would have meant a complete optical redesign. Nikon seems to have taken their very successful design of the F-Nikkor and optimized it further – which may not be a bad decision.

Check prices on the Nikon Z 70-200mm f2.8 VR S at B&H, Adorama, or Wex. Alternatively get yourself a copy of my In Camera book or treat me to a coffee! Thanks!

Focus accuracy and repeatability is critical to consistently produce sharp shots. Repeatability (the accuracy of focus on the same subject after repeated focus-acquisition) of this lens at 200mm focal length is very good (measured 99.1% in Reikan FoCal) with no outliers over a series of 40 shots. There is no focus variation whether the lens focuses from a closer distance or from infinity but I had cases of hunting. At 200mm focal length the lens focuses in around 0.5 sec from infinity to 2m (1:10 magnification), which is a little faster than the AF-S 70-200mm f2.8E VR on a Z7 (via FTZ adapter) but clearly slower than the AF-S 70-200mm f2.8E VR on a D850 which took only 0.35 sec.

The zoom ring is located at the front of the lens and turns through 80 degrees the way Nikon users are used to. It has a 41mm wide rubber surface with a good grip. It can be operated with one finger but needs more force than the AF-S 70-200mm f2.8E VR. The lens control ring is only 8mm wide and is located close to the camera. It has no rubberized surface but moves very smooth and can easily be operated even with your pinky. The focus ring is 21mm wide and moves smoothly.

AF-operation produces a slight whir which can be heard from the outside when shooting photos. If you record video with the built-in microphone the AF-drive can produce a very slight noise. Image stabilization or controlling the aperture from the control ring on the lens does not produce any noise.

This is now the second optically stabilized Z-Nikkor I tested and I was curious whether the very good results from the Z 24-200mm VR would repeat. Nikon even claims 5.5 stops of stabilizing effect for the Z 70-200mm f2.8 VR S which is 1 stop better than for the Z 24-200mm VR. To that end I did a series of 160 test-shots hand-held at 200mm focal length and tested with shutter speeds from 1/200 of a second down to 0.3 sec. I used the shots at the shortest shutter speed with image stabilization (VR) off as reference of how good my hand-holding was at the time of the test and Reikan FoCal did the chore of evaluating the sharpness of all shots.

Here’s the results: With VR=on the combined stabilization from lens and camera produced only 4 outliers in the 100 shots down to 1/12 sec (4 stops) but the rest was clearly better than the average sharpness at 1/200 sec with VR=off. At 1/6 sec (5 stops) results became less consistent but two out of three images were still very sharp. At 1/3 sec (6 stops) results became more blurred on average but 40-50% of the images were still pretty sharp, sharper than from the Z 24-200mm VR at 1/3 sec. This is again a very impressive performance of the combined optical and sensor-based image stabilization. And I’m pretty sure that if you can support yourself while shooting even if only leaning against a wall or lamp-post your chances to get sharp shots at 200mm and 1/3 sec are very high. 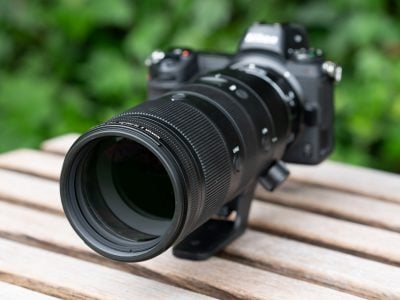