The Nikon Z 35mm f1.8S is a good mild wide angle prime for owners of Z-series mirrorless bodies: Resolution and contrast is as good as or even better than from the Zeiss 28mm f1.4 Otus - which is no small feat. It also delivers very good close-up performance and retains its high contrast exceptionally well even in contra-light situations. Plus its size and weight makes it a good match for the compact Z-series bodies it's designed for. The new Z Nikkor also focuses fast and reliably and is sealed as thoroughly as the Z 24-70mm f4S. But its relatively strong loCA show up clearly in high contrast situations when the lens is used wide open, and the Bokeh in the farther background can be quite distracting which is a pity for an f1.8 prime lens. These drawbacks of the Z 35mm f1.8S prevent the lens from getting the top rating but it certainly deserves a Recommended!

Check prices on the Nikon Z 35mm f1.8S at Amazon, B&H, Adorama, or Wex. Alternatively get yourself a copy of my In Camera book or treat me to a coffee! Thanks!

The Nikon Z 35mm f1.8S is a mild wide-angle prime lens for Nikon’s full-frame Z-series mirrorless cameras. A popular focal length for street photography and general-purpose use, it features an f1.8 focal ratio and joins the Z 24-70mm f4S as the first Z-series lenses on the market; the Z 50mm f1.8S will be the third at the end of 2018. Nikon’s Z-lenses may be the only models currently available with a native Z-mount but thanks to Nikon’s FTZ adapter, existing F-mount lenses can easily be used on their new Z bodies. So the new Z 35mm f1.8S faces competition from a host of other wide angle lenses with the F-mount, most notably Nikon’s own AF-S 35mm f1.8G. 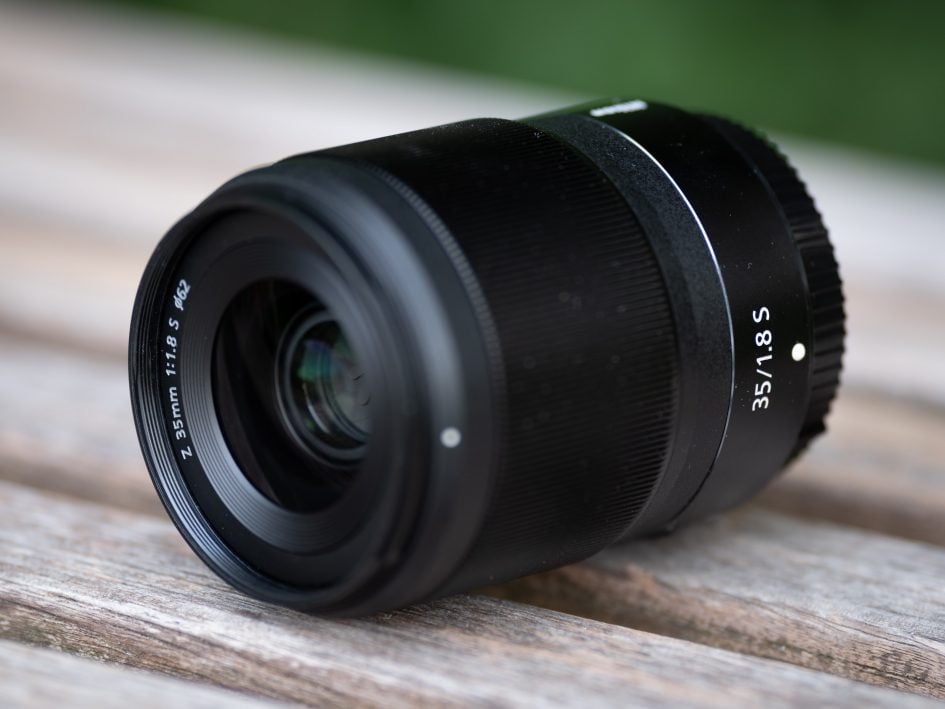 Size (diameter x length): 73 x 86mm (2.9 x 3.4in.). The lens hood adds 48mm which is pretty deep for a wide-angle lens and gives good shelter in inclement weather. It is 89mm in diameter. The F Nikkor is 72 x 72mm and the Tamron is 80 x 78mm (both without lens hood). For an apples-to-apples comparison one has to allow for the differences of flange distance between the Z-mount (16mm) and the F-mount (46.5mm). So these 30.5mm (1.2in.) have to be added when using the F Nikkor or the Tamron – either on an F-mount DSLR like the D850 or by mounting it via the FTZ adapter on a Z7. Only the diminutive Nikon AF 35mm f2.0D with its stubby 44mm length is shorter even when mounted on the FTZ adapter. [+]

Optics: 11 elements (including 2 special dispersion and 3 aspherical elements) in 9 groups which is similar to the F Nikkor and the Tamron. The new Nikon Z 35mm f1.8S uses Nikon’s Nano-Coating to reduce flare, glare and ghosting. [+] 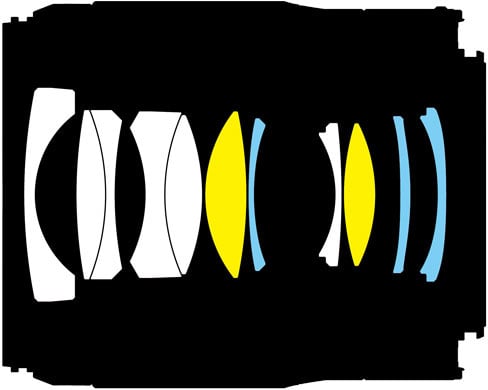 Auto focus: Yes with built-in AF drive. Manual-focus override is by simply turning the focus ring – if you didn’t assign another operation to this multi-function ring. The focus ring has a variable gearing that allows for very precise manual focus when turned slowly. Unfortunately this feature cannot be switched to linear gearing which makes smooth focus pulling for videographers almost impossible. Focus on the F Nikkor and the Tamron works similarly with the only differences being a linear gearing and that the focus ring does only that: focusing. [+]

Comes with a soft pouch and the lens hood is included, reversible for transport. That’s similar to the F Nikkor but I must say the new pouches for the Z lenses so far are  disappointing: the material is flimsy and the pouch has no strings to pull it close. So if you put the lens in your bag it might easily slip out of its pouch and bang around unprotected. That being said, the Tamron does not even come with a pouch. [0]

Distance information is relayed to the camera, so the camera and flashes can do all the advanced exposure-related stuff with this lens. Same for the alternatives. Except that the new Nikon Z 35mm f1.8S does not have distance scale. Do I miss it? Well, sometimes. But you could shoot perfectly without one. [+]

Aperture ring: the multi-function control ring of an S-lens can be assigned to operate the aperture, exposure compensation or focus. It automatically falls back to its customary focus control when the lens is switched to manual focus. Although the lens control ring has not the same benefit as having a focus ring plus a dedicated aperture ring on the lens it gives you more flexibility to control one of the more important shooting parameters directly from a nice ring on the lens. The F Nikkor and the Tamron don’t have an aperture control ring. [+]

The score in the “features-department” is 0[-]/2[0]/11[+]. So the lens has a very good feature set. It offers the nifty feature of the multi-purpose control ring and is sealed against the weather like Nikon’s pro lenses. 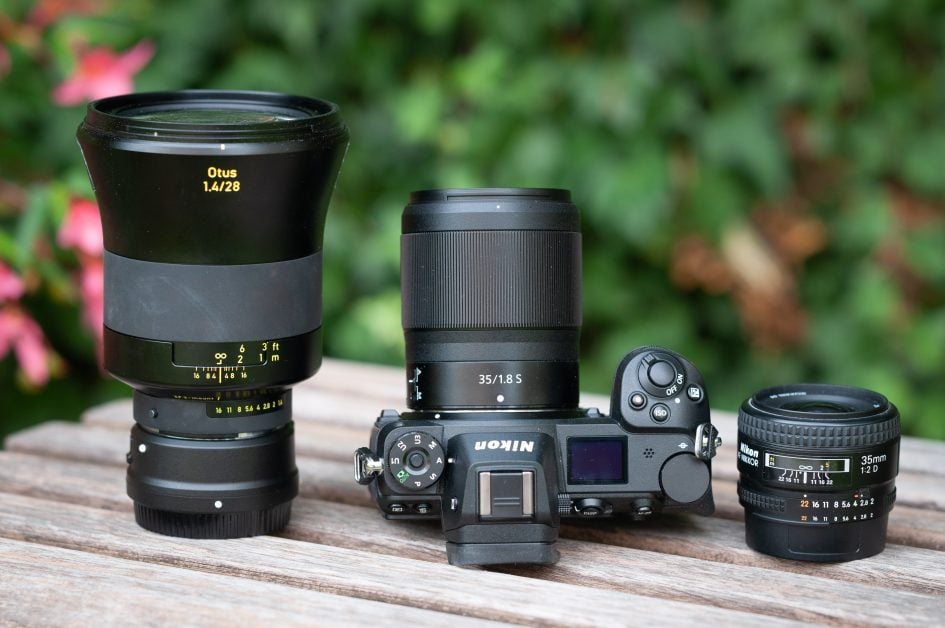 The market for wide-angle prime lenses is pretty crowded but no other manufacturer offers any lens for Nikon’s Z-mount so far. So for alternatives we have to look at F-mount lenses which can be used mounted on Nikon’s FTZ adapter – adding another 31mm in length and 133g in weight:

That’s it regarding 35mm f1.8 alternatives. The other choices include either going wider to 28mm (offering 12 degrees wider angle of view) or getting lenses with a 2/3 of a stop brighter focal ratio of f1.4 which are all bigger, heavier and normally more expensive than their f1.8 counterparts: 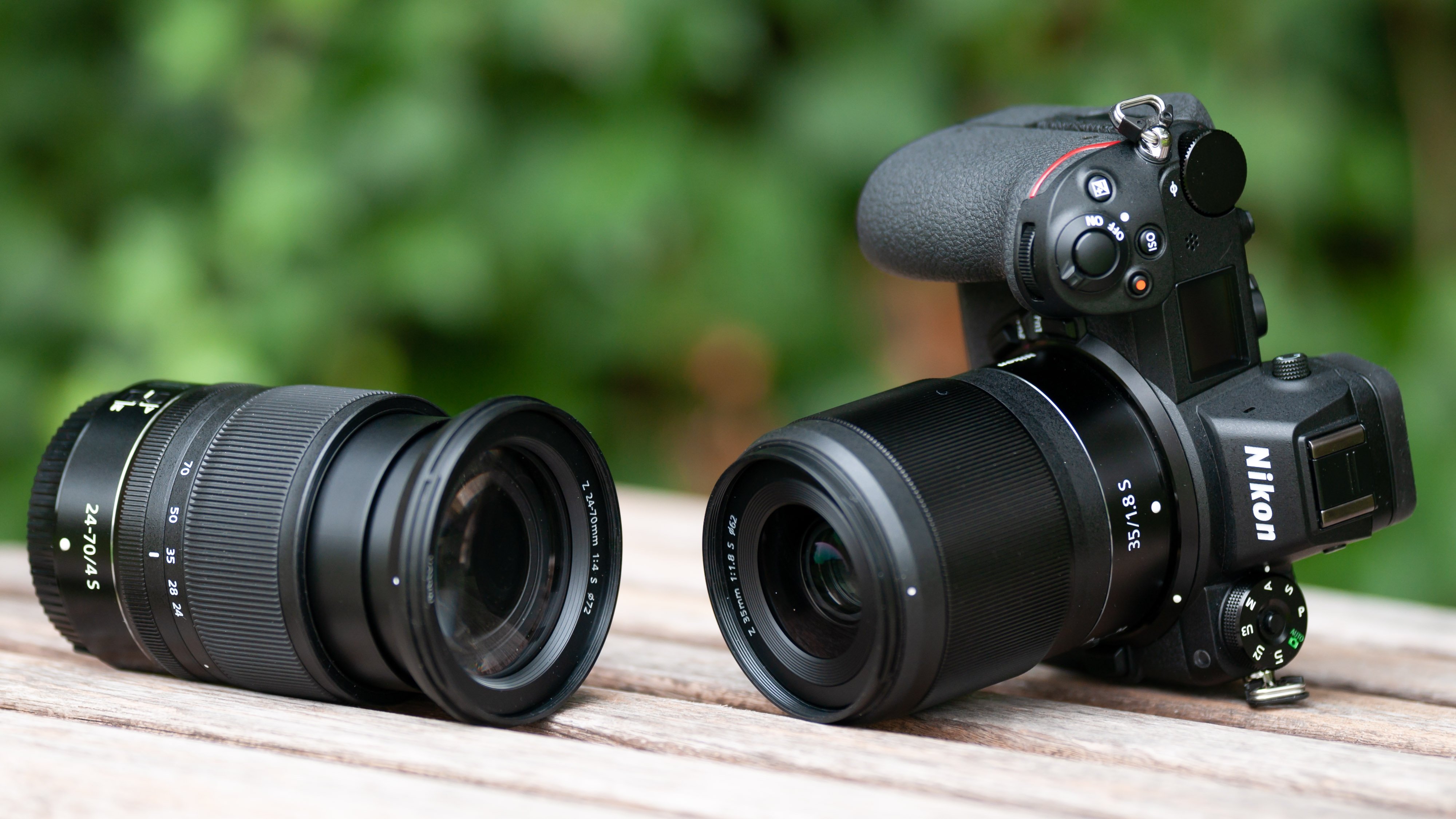 Finally you might also consider the new Nikon Z 24-70mm f4.0S as an alternative. It has the benefit of covering a 2.9x zoom range reaching 2x further at the long end and going 21 degrees wider at the short end. It does offer only an f4.0 focal ratio but is of similar size and weight as the Z 35mm f1.8S, doesn’t need an adapter like the other alternatives above, and offers very good optical performance. Plus it comes pretty cheap if you buy it in a kit together with the Z7 camera (600 EUR / 750 USD). It got a Highly Recommended in my Nikon Z 24-70mm f4S review.

Focus accuracy and repeatability is critical to consistently produce sharp shots especially with large aperture lenses. Repeatability (the accuracy of focus on the same subject after repeated focus-acquisition) of this lens is very good (measured 98.5% in Reikan FoCal) with no outliers over a series of 40 shots. There is no focus variation whether the lens focuses from a closer distance or from infinity. Interestingly I had to set AF fine-tune of -3 to achieve the best results as my sample exhibited a little back-focus. This sound at odds with a camera that focuses with an embedded phase-detect system on the sensor, but may be influenced by the longitudinal colour aberrations of the lens where the focus of the colors red, green, and blue are slightly different.

The lens focuses in around 0.5 sec from infinity to 0.42m (1:10 magnification), which is pretty fast. Hunting didn’t occur under the well-lit test conditions but under real-life conditions I saw the lens hunt on occasion. The focus/control ring is 38mm wide. Its surface is not rubberized but as it moves super smooth and can easily be operated even with your pinky the finely knurled metal surface is well up to its task. The ring has a slight play. 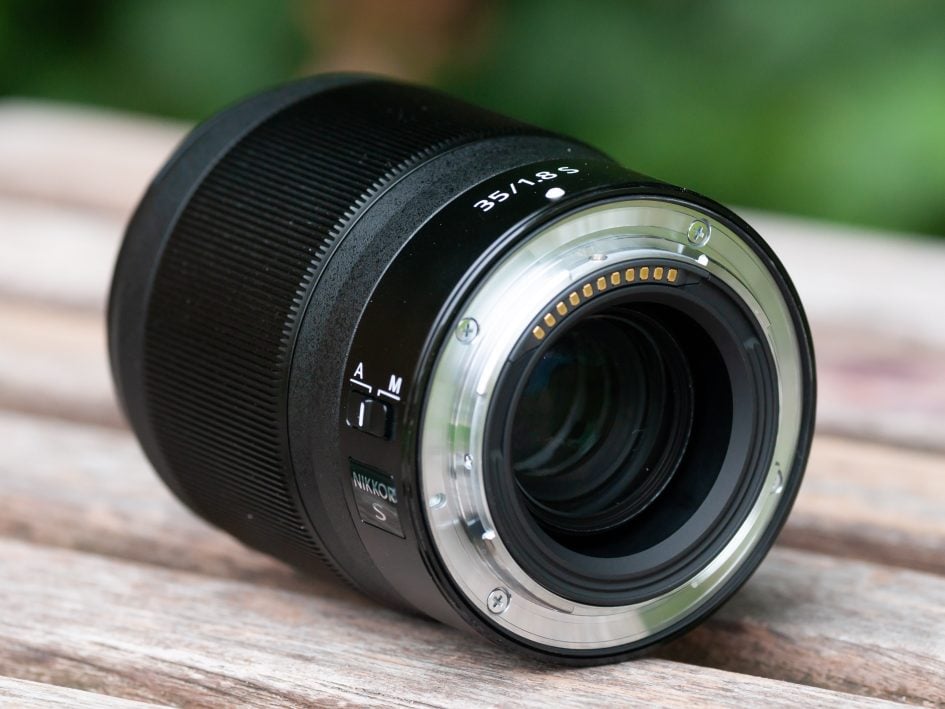 AF-operation of the new lens is barely audible from the outside. But if you record video with the built-in microphone the AF-drive still produces a slight buzz. This lens is clearly not as quiet as the Nikon Z 24-70mm f4S. If you use the control ring on the lens to change the aperture this works smoothly and without noise.

As you pull focus, you’ll notice a very slight focus breathing: the image becomes less magnified at closer focusing distances. When I adjusted the focus from infinity to 0.42m on the new Nikon, I measured a 0.7% decrease in magnification. This is totally inconspicuous and should please videographers.

To test the effectiveness of the image stabilization with the Nikon Z 35mm f1.8S on a Z7 body, I did a series of 140 test-shots hand-held. I tested with shutter speeds from 1/40 of a second down to 0.8 sec. Shots at 1/40 sec with VR=OFF are used as reference of how good my hand-holding was at the time of the test and Reikan FoCal did the chore of evaluating the sharpness of all shots. Here’re the details: With VR=ON (in camera) the combo produced results down to 1/5 sec (3 stops) which were better than 1/80 sec with VR=OFF. At 0.4 sec there were 40% clearly blurred images and 0.8 sec produced hardly any usable results. This is a 3-4 stop advantage from stabilization. The Nikon Z 24-70mm f4S I had tested earlier had a 4-5 stop stabilization from the Z7 at 70mm focal length.

Check prices on the Nikon Z 35mm f1.8S at Amazon, B&H, Adorama, or Wex. Alternatively get yourself a copy of my In Camera book or treat me to a coffee! Thanks!
Pages: 1 2 3 4 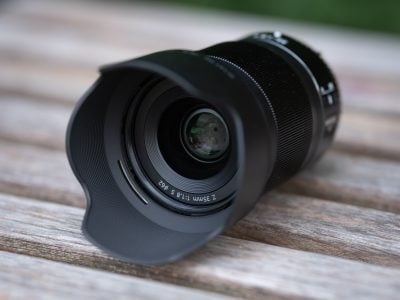 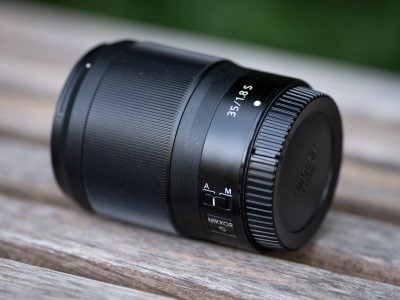 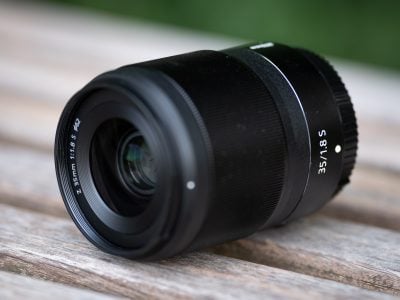