Having the most effective image stabilization and the best image quality across the FX-sensor in its class earns this lens a Highly Recommended. Be aware though that this performance comes at a price: literally and in an increase in size and weight. Good points: Good to very good quality across the full-frame area; weather sealing; quiet and fast AF operation; very good image stabilization. Bad points: Stronger vignetting and distortions than predecessor; large and heavy; very high price.

Check prices on the Nikon 24-70mm f2.8 E at Amazon, B&H, Adorama, or Park Cameras. Alternatively get yourself a copy of my In Camera book or treat me to a coffee! Thanks!

The Nikkor AF-S 24-70mm f2.8E ED VR is a professional-grade standard zoom and the successor to one of Nikon’s best-selling full-frame DSLR lenses. Launched in October 2015, it comes eight years after the earlier AF-S 24-70mm f2.8G and shares the same coverage and focal ratio beloved by portrait and wedding photographers. The new f2.8E version adds image stabilization, an electromagnetic diaphragm (hence the “E” moniker), and fluorine coating on the front and rear elements of the lens to make it easier to clean. Its gold-ring and a price-tag of around 2500 EUR puts quite a dent in your wallet while its predecessor can now be had for around 1400 EUR. The new lens is still large, indeed even longer and heavier than its predecessor. But that was to be expected as Nikon didn’t incorporate a phase-Fresnel element (which made the AF-S 300/4.0E VR such a small and light lens) and the addition of image stabilization certainly needed more room and glass. With 20 elements the optical construction is indeed more complex than before and the big question is how image quality developed with the new design.

In this review I’ll put Nikon’s AF-S 24-70mm f2.8E VR zoom to the test on a Nikon D810 to see whether the lens is a good match for Nikon’s highest resolution 35mm DSLR. 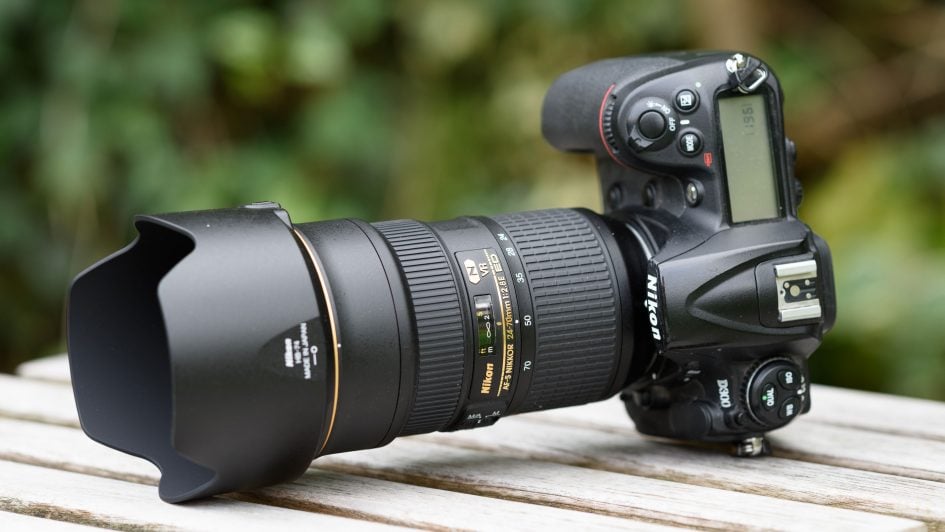 Size (diam. x length): 88 x 155mm (3.4 x 6.0 in.) which is 5mm wider and 22mm longer than the predecessor at 83 x 133 mm. Tamron’s SP 24-70/2.8 VC is 46mm shorter than the new Nikkor. Add the lens-hood and you’re over 200mm which makes the lens look conspicuous: people feel being “watched” with this lens. It is essentially the same size as the Nikon 300/4.0E VR! Like its predecessor, the zoom is its shortest at 50mm focal length and extends 23mm when zoomed out to 24mm focal length. If you have the lens-hood attached the length remains constant at 203mm regardless of focal length. A lens this size also produces a shadow at the bottom of an image when using the built-in flash: with lens-hood attached the shadow can be seen at focal length below 60mm. Without lens-hood the shadow creeps in at below 35mm. [-]

Optics: 20 elements in 16 groups vs. 15 elements in 11 groups of the predecessor. That’s 32 air/glass-surfaces that produce a lot of opportunities for flares and ghosts. Nikon has applied their special Nano Crystal Coat and we’ll see how this works out in practice. The cross-section shows a lot of special elements four of which are aspherical. [0]

Filter-thread: 82mm. That’s bigger and more expensive than the 77mm standard which the predecessor employed. But most other 24-70/2.8 zooms need 82mm filters. [0]

IS: Yes! Although Tamron had the lead here. And with the ever shrinking pixel-sizes on todays high-resolution sensors you’ll be glad to get every support to fight shake/blur. And shake you see: Just look through the viewfinder at 70mm! [+]

AF: AF-S with SWM (silent wave motor), so it does work on D3x00/5×00-bodies, manual-focus override by turning the focus ring. Same as with the predecessor. [+]

Comes with a very nice semi-soft lens-case that is well padded, the lens-shade is included, reversible for transport, and has a lock to prevent accidental loss, and the lens-caps are standard Nikon’s. Same as with the predecessor. [+]

Sealing: Yes! A rubber grommet at the lens-mount. [+]

The score in the “features-department” is 2[-]/4[0]/7[+]. The minus-points being the steep price and the big size/weight. Of the pluses the image stabilization is certainly the biggest advantage.

Here is the angle of view that the new Nikon covers with its 2.9x zoom:

Its predecessor is effectively just a bit shorter (around 1.5mm) at the long end and around 0.5mm longer at the short end. 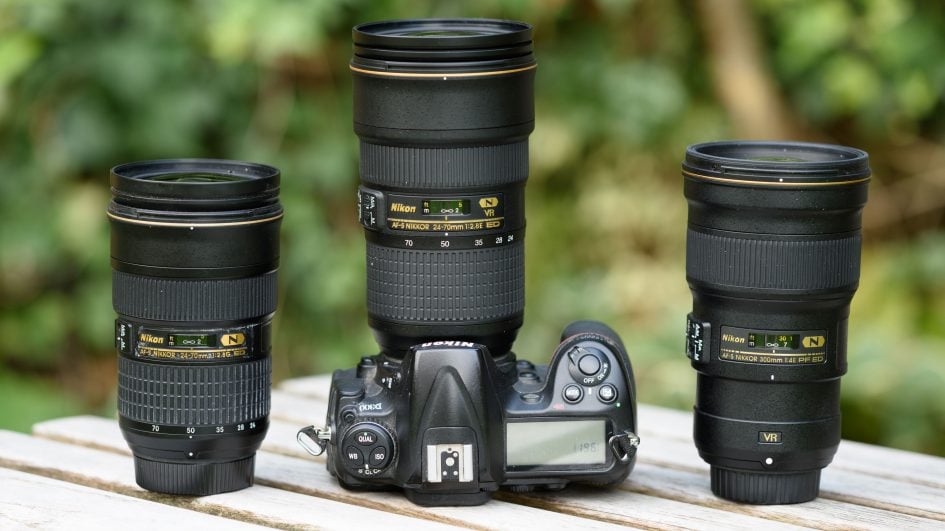 – From Nikon the predecessor is certainly a viable alternative (left on the shot above): The AF-S Nikkor 24-70mm f2.8G ED is much cheaper than the new zoom (around 1400 EUR) but has no image stabilization. It earned a Highly Recommended in my Nikon 24-70/2.8G review.

– The Tamron SP 24-70mm f/2.8 Di VC USD: At around 800 EUR it’s not only considerably cheaper but it offers image stabilization too. Plus it offers good overall performance that earned this lens a Recommended rating, as you can read in my Tamron 24-70/2.8 VC review.

Focus accuracy and repeatability is critical to consistently produce sharp shots. Repeatability (the accuracy of focus on the same subject after repeated focus-acquisition) of this lens is very good (measured 98,9% in FoCal) with no outliers over a series of 40 shots. And there is only a very slight performance variation whether the lens focuses from infinity or from a closer distance. At 50mm focal length the lens focuses very fast in around 0.35 sec from infinity to 0.5m. The predecessor is no slouch either but needs around 0.5 seconds for the same task. So the new lens is 30% faster than its already fast predecessor.

The focus ring has no slack/play between its movement and the focus-action and moves pretty smooth. But it has a very short throw of only 65 degrees. The focus ring is 18mm broad and movement is very smooth. The 34mm broad zoom-ring turns about 90 degrees and is a little on the stiff side (at least right out of the factory) but is not prone to creep. As such the construction feels almost like its predecessor. Only that the zoom-ring is 6mm broader on the new lens and the zoom-markings are easier to read.

AF-operation is barely audible from the outside. If you record video with the built-in microphone every focus-movement starts with a slight “click” and the AF-drive is very quiet. The VR-system is virtually silent both on the outside and when recording video.

In general the impression of build quality is that of an upmarket/enthusiast albeit not pro-level lens: A high quality construction combined with a weather sealed metal lens-mount, nine rounded aperture blades, and a tight fitting lens hood. Compared to the predecessor there seems to be a little less metal on the outer body of the lens. But that does not say anything about the robustness of the inner construction. And for a designated pro-level lens Nikon hopefully made sure that this lens can stand a beating. At least they speak of a “stronger build” and a “resilient and sturdy construction built for intensive and demanding professional use”.

To test the effectiveness of the image stabilization I did a series of 140 test-shots hand-held at 70mm focal length. Shutter speeds were from 1/80 of a second down to 1/2.5 sec. Comparing the shots with VR set to “normal” with a reference sample of 20 shots at 1/80 sec with VR=OFF. I can report that the VR is good for at least 3 stops of image-stabilization with the number of good shots at 1/5 sec (4 stops) still 75%. That is a very good result and a main benefit compared to its predecessor. 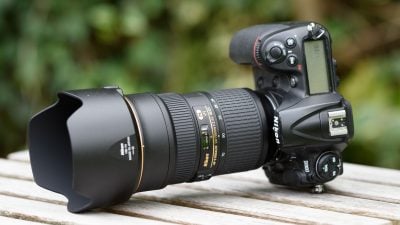 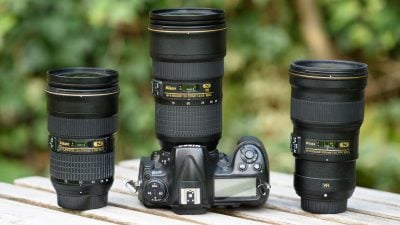