The Tamron SP 24-70mm f/2.8 Di VC USD G2 (model A032) is a stabilized standard 2.9x zoom available in mounts for Canon and Nikon DSLRs with full-frame sensors. It also works on their DSLRs with APS-C/DX sensor where the angle of view is equivalent to a 36-105mm zoom lens. Its optical performance is very good inside the APS-C/DX image circle, it has good image stabilization and a fast AF, shows only little longitudinal color aberrations, and can be easily customized via Tamron's TAP-in console on a computer. Its only major downside is the soft performance in the outer reaches of a high resolution full frame sensor.

Check prices on the Tamron 24-70mm f2.8 G2 at Amazon, B&H, Adorama, or Wex. Alternatively get yourself a copy of my In Camera book or treat me to a coffee! Thanks!

The Tamron SP 24-70mm f/2.8 Di VC USD G2 (model A032) is a stabilized standard 2.9x zoom available in mounts for Canon and Nikon DSLRs with full-frame sensors. It also works on their DSLRs with APS-C/DX sensors where the angle of view is equivalent to a 36-105mm zoom lens.

Announced in June 2017 the new lens is the successor to Tamron’s 24-70mm f2.8 VC (model A007) from 2012 which was the first stabilized 24-70mm f2.8 zoom on the market. Tamron didn’t change the optical design but the lens is now compatible with their USB-dock to fine tune various characteristics of the AF and image stabilization and features an improved AF drive and VC mechanism. There’s also the unavoidable price increase to a hefty 1700 EUR list price. But current street prices are already down to 1200 USD / 1300 EUR which is still a mark-up of 70% over the current street-price of its predecessor in Europe. 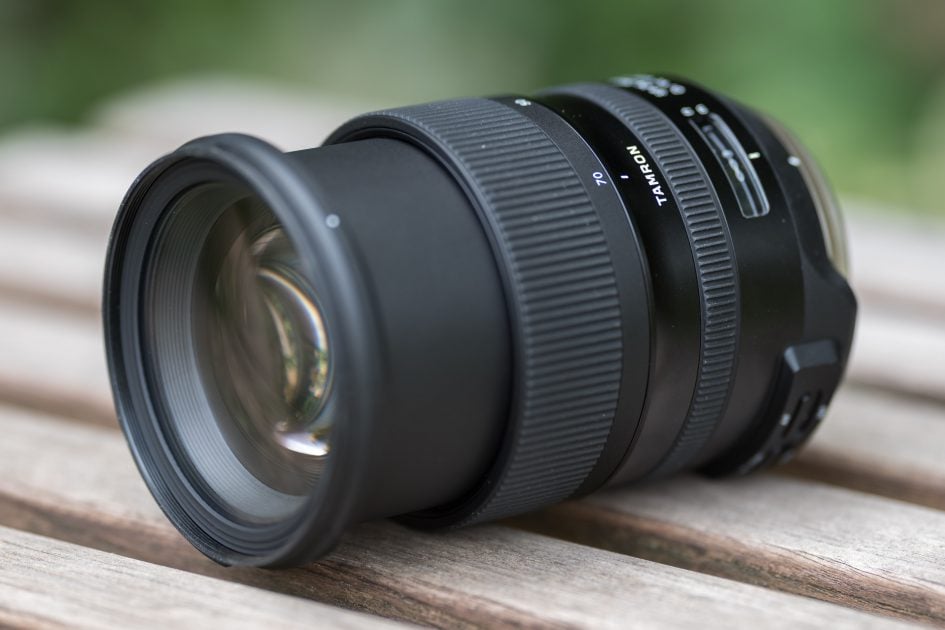 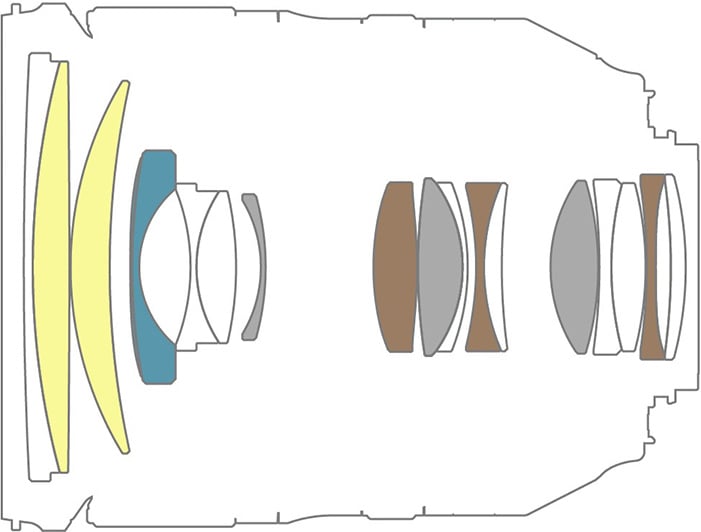 Optics: 17 elements (including 5 special dispersion and 4 aspherical elements) in 12 groups while the Nikon has 20 elements in 16 groups and the Sigma is somewhere in-between. Still: 12 groups have 24 air/glass surfaces that produce a lot of opportunities for flares and ghosts. We’ll see how well Tamron’s eBand coating copes with this challenge. [0]

Filter-thread: 82 mm, just like the predecessor, the Sigma, and the Nikon. This is larger than the de facto standard of 77mm, so you might need new filters. [0]

Image stabilization: Yes, called VC (vibration control). This is indispensable when handholding at longer shutter speeds on modern high resolution sensors. There are also different modes of stabilization (e.g. prioritizing shooting performance over viewfinder stabilization) which can be selected via the USB-dock. Unfortunately you cannot switch the modes in the field should you require a different priority for filming. [+]

Auto focus: USD (ultra sonic drive), so it also works on camera bodies which don’t have an AF-drive built in like Nikon’s D3x00/5×00. Manual-focus override is by simply turning the focus ring. Same with the competition. The new Tamron allows you to alter focus fine-tuning at 3 distances and 4 focal lengths with their USB TAP-in console. [+]

Comes with a soft lens-case and no strap. The lens hood is included, reversible for transport, and has a lock to prevent accidental loss which the Sigma doesn’t have. The lens-caps are standard. [0]

Aperture ring: no, same as with the competition. The aperture is actuated electromagnetically in the Nikon-version too which makes it the equivalent of a modern E-type Nikon lens and puts away with the mechanical coupling that Nikon uses on all older lenses and Tamron too had on the predecessor of the new lens. [0]

Sealing: yes, a rubber grommet at the lens-mount and further special weather-sealing throughout the lens. [+]

The score in the “features-department” is 0[-]/8[0]/5[+]. So the lens is well-featured although it misses the option to get the lens-mount swapped which is a unique feature of the Sigma.

The predecessor and the new standard zoom from Tamron 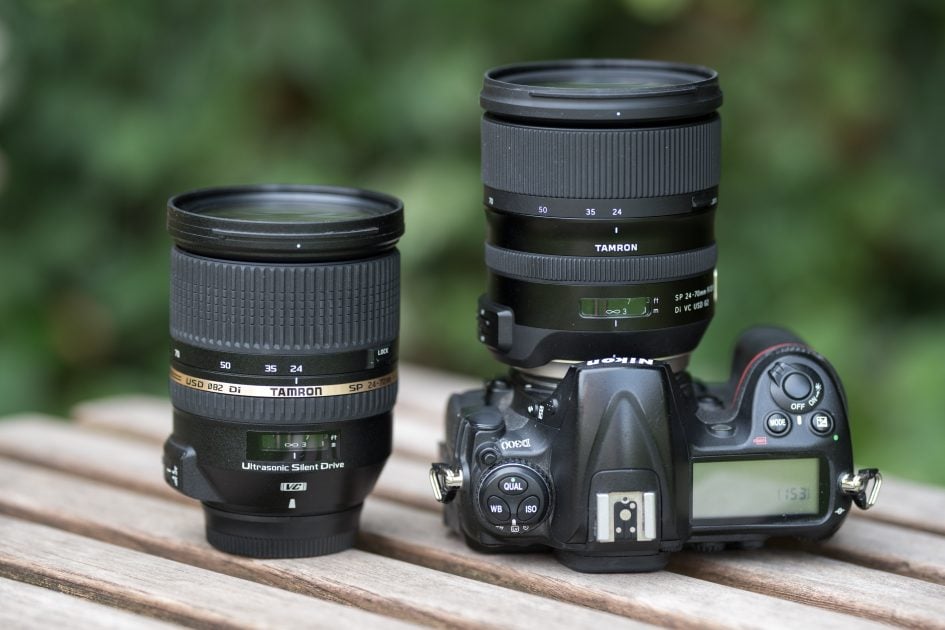 Here is the angle of view that the new Tamron 24-70mm covers with its 2.9x zoom:

Focus accuracy and repeatability is critical to consistently produce sharp shots. Repeatability (the accuracy of focus on the same subject after repeated focus-acquisition) of this lens at 70mm focal length is pretty good (measured 98.7% in Reikan FoCal) with 1 mild outlier over a series of 40 shots. There is a little performance variation whether the lens focuses from infinity or from a closer distance. At 70mm focal length the lens focuses without hunting in around 0.4 sec from infinity to 0.7m, which is faster than the 0.5 sec its predecessor needed. The Nikon 24-70mm f2.8E VR and the Sigma are just a tad faster at 0.35 sec for infinity to 0.5m.

The focus ring has no slack/play between its movement and the focus-action and a throw of 95 degrees. Its rubberized surface is only 11mm wide. The zoom ring turns through 70 degrees and has a 24mm wide rubber surface. Both rings are pretty stiff and can hardly be turned with one finger. They turn both in the same direction as Nikon users are used to but this is the complete reverse of what Canon does. The zoom ring is at the front and the focus ring closer to the camera – same as with the Sigma. But Nikon and Canon have the zoom ring of their current 24-70mm f2.8 zooms closer to the camera. 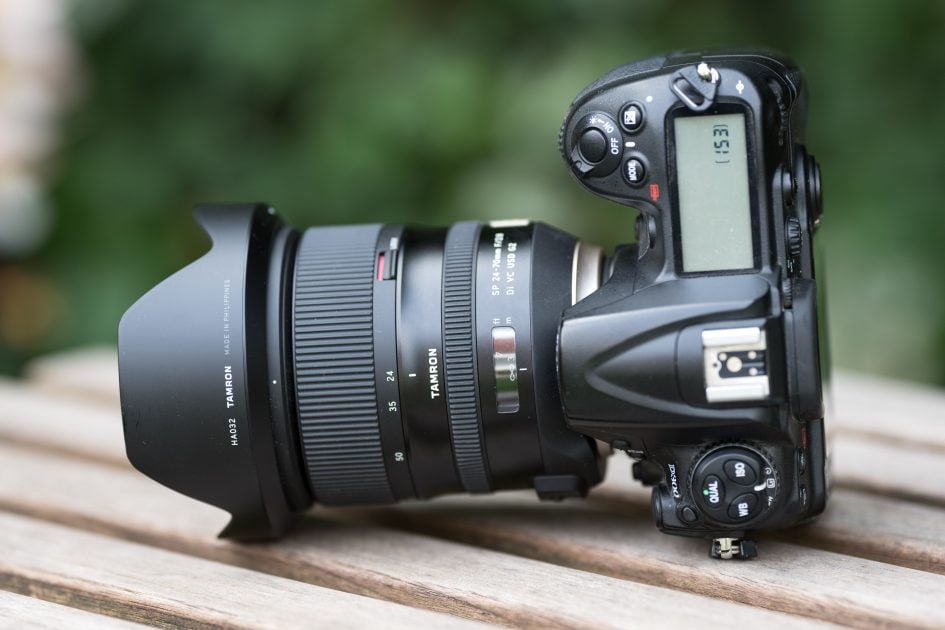 AF-operation is barely audible from the outside, and if you record video with the built-in microphone the AF-drive produces no clicks at the start or stop of focus-movements and noise is very low even when the AF makes fast movements. The Sigma produces  a noticeable hiss when the AF makes fast corrections.The image stabilization of the new Tamron is virtually silent both on the outside and when recording video which is the same with the Nikon and the Sigma.

As you pull focus, you’ll notice some focus breathing: the image becomes less magnified at closer focusing distances. When I adjusted the focus from infinity to 0.7m on the Sigma, I measured a 9% decrease in magnification at 70mm focal length which is pretty visible and may disturb videographers. In comparison the Nikon 24-70mm f2.8E VR enlarges the image by 2%.

To test the effectiveness of the image stabilization I did a series of 140 test-shots hand-held with the new Tamron at 70mm focal length with the VC set to prioritize the stabilization of the captured image. I tested with shutter speeds from 1/80 of a second down to 1/2.5 sec. Shots at 1/80 sec  with OS=Off are used as reference of how good my hand-holding was at the time of the test and Reikan FoCal did the chore of evaluating the sharpness of all shots. All-in-all the results are very convincing. Here’re the details: at 1/80 sec, 1/40 sec and 1/20 sec VC has a clear advantage over VC=Off at 1/80 sec. At 1/10 sec and 1/5 sec (3 and 4 stops) the results were more erratic but 80% of the shots at 1/10 sec and 70% of those at 1/5 sec were still very usable. Only at 1/2.5 sec (5 stops) the chances to get a usable image sank below 50%. So that’s some 3 to 4 stops of stabilization. The Sigma yielded a bit better results at 1/10 and 1/5 of a second and the Nikon is somewhere in-between.

Check prices on the Tamron 24-70mm f2.8 G2 at Amazon, B&H, Adorama, or Wex. Alternatively get yourself a copy of my In Camera book or treat me to a coffee! Thanks! 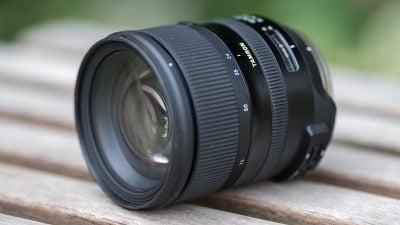 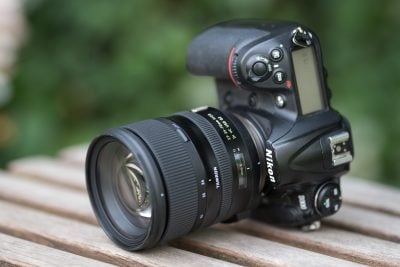