The Zeiss Apo Sonnar 135mm f2.0 is a medium tele-photo lens with a large aperture for full-frame bodies. The price tag of 1800 EUR is not as extraordinarily high as Zeiss’s Otus series but it’s still a lot of money for a lens that is manual focus only and has no image stabilization. But the “Apo” moniker in the name is a hint of what Zeiss tried to accomplish in their lens: An apochromatic design with four special lens elements should reduce chromatic aberrations and produce very sharp shots even wide open.

The Apo Sonnar is available with Canon mount “ZE” and with Nikon F-mount “ZF.2”, but can be used via adapters on other manufacturers’ bodies, such as the Sony A7 / A7r. In my Zeiss 135mm f2.0 review I’ll share my findings, including sharpness results, contra-light performance, Bokeh, and a selection of sample images when mounted on a Nikon D810 body.

Size (diameter x length): 84 x 105 mm. The lens hood adds another 57mm to the length of the lens. Both the Samyang and the Nikon are 15mm longer w/o lens-hood but a little slimmer at the focus ring. [0]

Weight: 920g. The Samyang and the Nikon are both at little lighter at around 820g. The metal lens hood adds another 100g to the Zeiss while the Samyang’s plastic lens hood weighs 60g and Nikon has its lens hood integrated. [0] 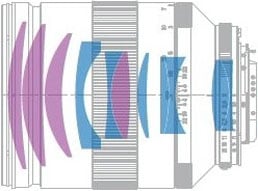 Optics: 11 elements in 8 groups. The lens contains 4 special dispersion elements. Zeiss, Samyang and Nikon employ no aspheric elements in their 135/2.0 designs which should be good for the Bokeh as this avoids onion rings. [+]

Closest focus distance is 0.80m which gives you a nice magnification of 1:4. While focusing close the lens extends 32mm which is quite unusual for a non-macro lens. The Samyang goes to 0.80m too but at a slightly reduced magnification of 1:4.7 and it does not extend. The Nikon has the least to offer here at 1.1m and 1:6.9 magnification. [+]

Filter-thread: 77mm, the professional standard. It’s the same for the Samyang. The Nikon only needs a 72mm filter. [0]

Image stabilization: No. That’s about par for the course on large aperture primes: Neither the Samyang nor the Nikon offer stabilization, too. Unfortunately at a focal length of 135mm and with today’s high resolution sensors it’s pretty challenging to avoid blur/shake with hand-held shots. Use 1/250 sec to be on the safe(r) side or use a tripod. Tamron has proven that you can build f1.8 primes with image stabilization and not compromise image quality for it. [0]

Auto focus: No! Manual-focus only just like the Samyang. Only the Nikon offers AF but has no built-in AF motor. So for the AF of the Nikon to work you need a body with integrated AF-drive. [-]

Comes with no lens case but a metal lens hood is included, reversible for transport, and the lens-caps are similar to Nikon’s. Why Zeiss decided to deliver a 1800 EUR lens without a lens case is beyond me. [-]

Distance information is not relayed to the camera, the lens delivers a value of 0m regardless of the distance you choose. This disables some of the advanced exposure-related stuff e.g. a Nikon body can do although the lens does have electrical contacts and communicates some EXIF data with the body. It’s the same with the Samyang. Only the Nikon relays subject-to-camera-distance. [0]

Sealing: no rubber-grommet at the lens-mount. Same with the Samyang and the Nikon. [0]

The score in the “features-department” is 3[-]/6[0]/4[+]. The major minus of the Apo Sonnar is its missing autofocus. And at 135mm focal length this is a real critical issue as you have to be very careful with the focus indicator to nail focus at f2.0. There’s also no lens pouch, no electronic distance information, and a very high price. So the optical performance is critical to the success of this lens.

– Samyang offers the most obvious alternative with their 135/2.0 ED UMC from 2015. It is manual focus only too and costs a mere 500 EUR (incl. 19% VAT). Its build is rather plasticky but it has excellent optical quality. See my Samyang 135mm f2.0 ED UMC review where it came with a Highly Recommended. Be aware though that only the Nikon version of the Samyang has an automatic aperture!

– From Nikon there’s the venerable AF DC 135/2.0D from 1995. It offers autofocus (driven by the camera) and has a unique Defocus-image Control (hence the “DC” moniker) which can be used to change the appearance of out-of-focus areas (see an example at the bottom of the Zeiss Apo Sonnar 135mm f2.0 sample images page). It costs around 1300 EUR and is not a bad lens. But it exhibits some very colorful aberrations as can be seen in the comparative shots on the next page

– Canon users can get the EF 135/2.0 L USM from 1996 which offers autofocus with built-in ultrasonic drive and seems like a very decent performer albeit with very visible longitudinal CAs. It costs around 950 EUR.

– Sony offers the SAL 135/1.8 ZA Carl Zeiss Sonnar T* from 2006 for A-Mount or via adapter also for E-Mount. It has autofocus but relies on the body to provide the AF-drive. It’s around 1500 EUR and is the largest aperture 135mm lens available. Tests indicate that it’s a very good performer albeit with some serious longitudinal CAs.

As with every manual focus lens I can only say: if you can’t manage to properly focus manually you better forget about this lens, skip this review to avoid being infected by the superior image quality, and head over to alternative lenses that offer autofocus. Only if you’re shooting from a tripod or your style allows for taking a second or third shot to nail focus then this may be a lens for you. But make no mistake: hand-held focusing in live-view is almost impossible as the long focal length of 135mm magnifies any shake and the image jumps around on the screen at maximum magnification. So you better get some support. Using the focus-indicator of your camera is also quite a gamble unless you know exactly when the lens achieves sharpest focus – and check focus after each shot. But to be honest: Even with all the autofocus lenses I use I almost always check for perfect focus, because with less than ideal targets there’s always a chance the camera pulled focus to a different spot than you intended it to.

The focus ring has no slack/play between its movement and the focus-action and a throw of 268 degrees, which is ideal for accurate focus wide open. The focus ring is not easy to grip as it has only a small 20mm wide metal structure with no rubber to give you some extra grip. It moves smoothly but can hardly be operated with one finger. It has hard stops on both sides of the distance scale so you know exactly when you’ve reached one or the other end of the focus range. But the hard stop on the far end is a bit beyond infinity so you star-gazing photogs still need to find exact focus manually if you want to capture the Milky Way in all its sparkling glory. The distance scale and dof markings are clear and not obscured by a plastic window but the numbers are much smaller than on an Otus lens and thus are harder to read.

The lens has nine rounded aperture blades and the aperture ring has half-stop clicks up to f16, although there’s no smooth step-less option that videographers would have liked. To operate the aperture from the camera simply set it to f22 where it is automatically arrested with a small latch/button. The lens is built like a tank with a fully metal outer barrel, metal innards, and a metal lens-shade that fits well at the lens-front and does not rattle.

The design is all straight lines and the metal surfaces are all smooth and easy to clean. All-in-all holding and operating this lens conveys a feeling of great craftsmanship and solid high-quality build but is still on a level below what the Otus lenses deliver.