Lenses with focal ratios of f2.8 or larger are often prone to longitudinal color aberrations (loCA, a.k.a. “axial color” or “bokeh CA”). These show up as magenta coloration in the foreground and greenish hues in the background and are not easily corrected in post-processing. The Zeiss shows some mild loCA at f2.0 although it is designated as an Apo(chromatic) lens. The effect is a little stronger at f2.8 but by f5.6 it is gone. The test also revealed that there is only little focus shift.

The Samyang is a bit better behaved especially at f2.8 in the magenta foreground:

The Nikon DC 135/2.0D (at neutral DC setting) is much softer and the best resolution is in the area of pretty heavy “red-shift”. It improves markedly at f2.8 but needs stopping down to f8 to get rid of loCA:

Shooting at closer distances (around 1m) normally aggravates any loCA problems. See the Zeiss in the following 50% crop on top, the Samyang in the middle and the Nikon at the bottom – all shots at f2.0: 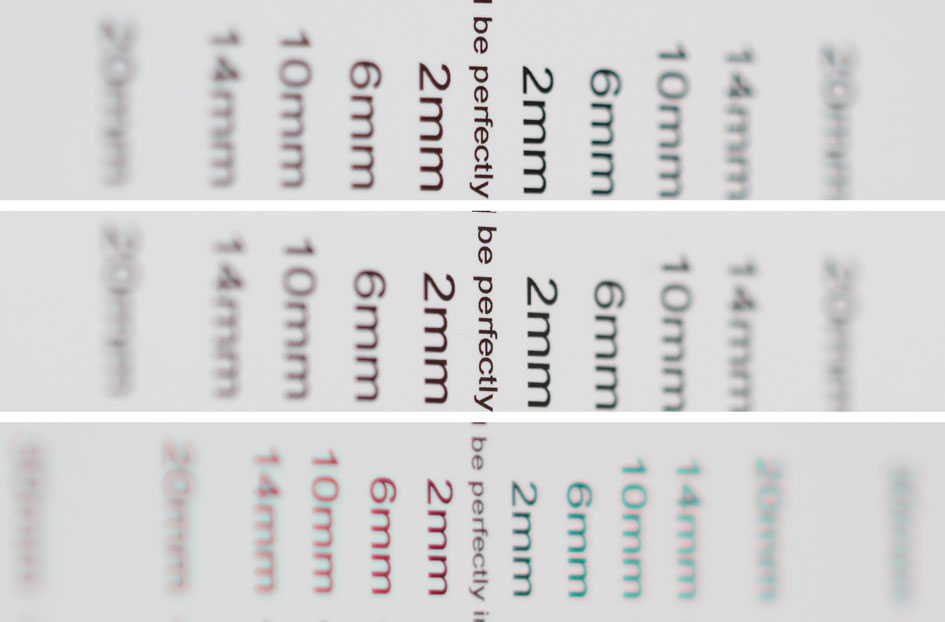 Both the Zeiss and the Samyang behave well at close distance while the Nikon becomes outright ugly.

These charts show the lens-performance of both lenses at their largest aperture f2.0. But while most manufacturers like Samyang (on the right) display the contrast-curves at 10 lp/mm (red) and 30 lp/mm (blue) Zeiss displays the contrast-curves at 10, 20 and 40 lp/mm (from top to bottom), which is a bit unusual. To read these charts you need to know that higher values are better and the closer the line-pairs (dotted and continuous for Zeiss, dark and light color for Samyang) are together the less astigmatism (= resolution depends on the orientation of the test-pattern) the lens has. The x-axis displays the distance from the optical axis (=center of the sensor) in mm. I’ll show you the real-life performance at 4 mm (center), 13 mm (APS-C/DX-corner), and 20 mm (FF/FX-corner) on a D810.

From the charts, the Zeiss should be outperformed by the Samyang: The 10 lp/mm contrast of the Samyang is above the Zeiss and the 30 lp/mm contrast of the Samyang is even higher than the less demanding 20 lp/mm contrast of the Zeiss. Both lenses show very little decline in sharpness towards the corners of the sensor and little sign of astigmatism – at least on paper. You should be aware that manufacturers produce MTF charts in different ways: Some measure the MTF on a real lens (like Zeiss does) some use calculated MTF values that come out of the lens design software. So it’s crucially important to see how this theoretical performance translates into real life results in the sharpness test based on Siemens-stars.

What follows are near-center results (first column) followed by APS-C/DX-corner results and FF/FX-corner results on a D810. Processing was done in Lightroom 6.6 from RAW at Camera Standard settings. Noise-reduction is set to 0, sharpening to 35/0.5/36/10, with no extra tone, color, or saturation-adjustment. White-balance was adjusted to a neutral white and I did some exposure compensation to make the brightness of all crops match. So you will not see light fall-off in the corners. CA-removal is ON.

These 100% crops directly from a 36MP D800 sensor shows an excellent performance of this lens right from f2.0 and all across the full-frame sensor. This is very impressive indeed! With such a sharp lens you can see signs of diffraction setting in ever so slightly at f8.0 and clearly at f11. Distortions are very low.
Following is a direct comparison of the Zeiss (1st row) to the Samyang (2nd row) and the Nikon (last row):

Let’s discuss the Nikon first: At f2.0 it suffers from heavy spherical aberrations which colors every high-contrast edge an ugly magenta. But beneath the coloration it shows very good resolution right up into the corners of the full frame sensor. Converting these images to black-and-white gets rid of the CA but still shows a very low edge contrast – unless you significantly reduce the brightness of magenta in the conversion. You can also try to front-focus a bit to reduce the CA but then the resolution of fine details drops visibly. I’d suggest to use this lens stopped down at least to f2.8. BTW.: As the test-shots of the Nikkor were done on a D800 the AA-filter softens the images a bit compared to the test-shots from the Zeiss and the Samyang which were done on a D810. To provide the best comparison I used a stronger sharpening of 70/0.5/36/10 on the D800 ( vs. 35/0.5/36/10 on the D810).

The Zeiss and the Samyang perform pretty similar at a very high level with the Samyang showing a little less spherical aberrations in the center. At the APS-C/DX-corner the Zeiss is in the lead. And at the FF-/FX-corner both lenses are hard to distinguish: both produce stunning results at the outer area of the sensor. Regarding field curvature at this distance: The crops of the Zeiss were all taken from the same shot while the Samyang needed a bit of focus optimization indicating a slightly curved field.

The Siemens-star test-targets are shot at a distance of 40x focal length, which is in this case 5.4m. But performance of lenses also depends on the shooting distance. Therefore I do another series of test-shots of a landscape dubbed the “Unremarkables” where you can measure distances in km, not meter. I use this scene to show you how the lenses perform when almost everything is at infinity. I set White Balance to a standard daylight value to make them comparable across lenses shot at the same day and also try to make exposure comparable. There’s no tinkering with vignette-control so you see it here as it is produced by the lens. Focus was manually acquired at the largest aperture in live-view and not changed for other apertures.

The main image shows the complete scene at maximum aperture to give you an impression of the angle of view and to judge vignetting. This is followed by one row of 100% crops from f2.0 to f11 each from the middle, the APS-C/DX-corner and the right FF/FX-corner.

You can access the respective shots up to f22 via the links beneath the main image. 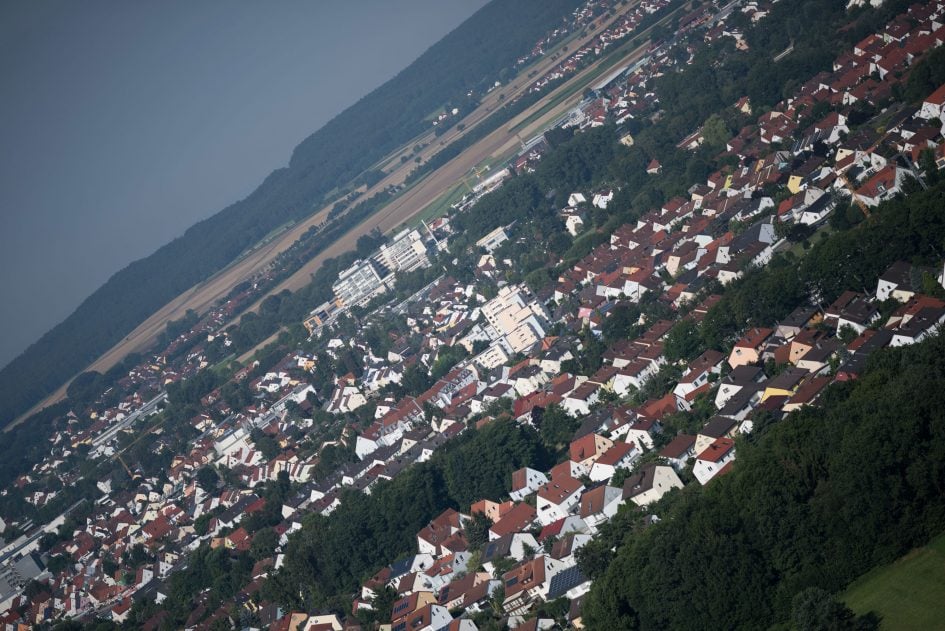 Performance at long distances confirms what we’ve seen in the tests at 5m: This lens is very good even wide open in the APS-C/DX image-circle and astonishingly good in the FF/FX-corner. Only the amount of vignetting is a bit of a let-down. Stop down to f4.0 to get superb clarity across the sensor and very low light fall-off. I shot the same scene within minutes with the Samyang 135/2.0 for comparison:

In the center and the APS-C/DX-corner both lenses perform almost identical. Only in the FF/FX-corner the Zeiss has a small lead. Maybe the lower field curvature of the Zeiss pays off here.

Following is a comparison with the Nikon AF-S 70-200/2.8G VR II at f2.8 and f8.0 just to see how big the difference between a zoom lens and a fixed focal is. As the zoom is a little decentered I had to use the other image diagonal to give you a good impression of how this professional zoom from Nikon performs:

It is quite impressive how much clearer the image of the fixed focal lens is (be it Zeiss or Samyang) compared to a professional-grade zoom lens. Even with the zoom at f8 does it not completely reach the sharpness and resolution of the fixed focal at f2.8.

Night-shots pose a different challenge for lenses as the contrast is even higher than under bright sun and point-light sources can reveal some weaknesses such as coma, haloing and color-aberrations that do not show up as prominently in other test-shots. The 100% crops below the main image show the effect of coma in the FF/FX-corner of the Zeiss at various apertures: 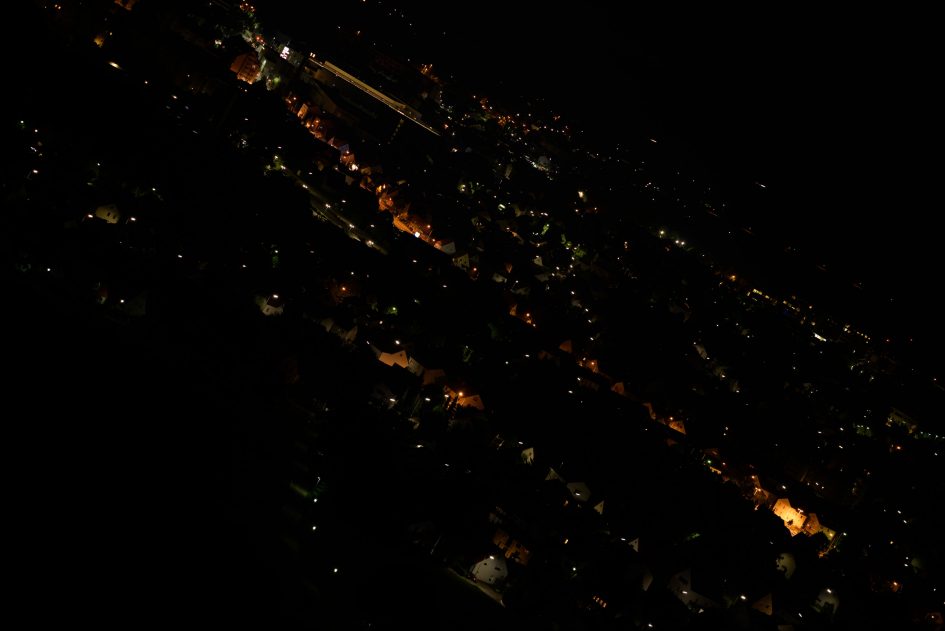 Both the Zeiss and the Samyang (following crops) show a near identical performance with almost no coma. Bravo!

The following crops from the Nikon were shot another day with the D800. Compared to the Zeiss and the Samyang the Nikon DC 135/2.0D has stronger coma and colorful, very distracting halos that show up all across the frame around point-light sources up until f4.0:

This test is for the rendering of point-light sources in an out-of-focus background. The circle of confusion that is produced by this test is pretty indicative of Bokeh performance (in the background) and light fall-off. Ideally the out-of-focus image of the point-light is evenly lit and perfectly circular, with no “onion-rings”, and without coloration. Large aperture lenses normally produce an effect known as “cat’s eye” the further away from the optical axis the point-light is projected. This is due to optical vignetting in the lens barrel when light enters the lens from an angle. 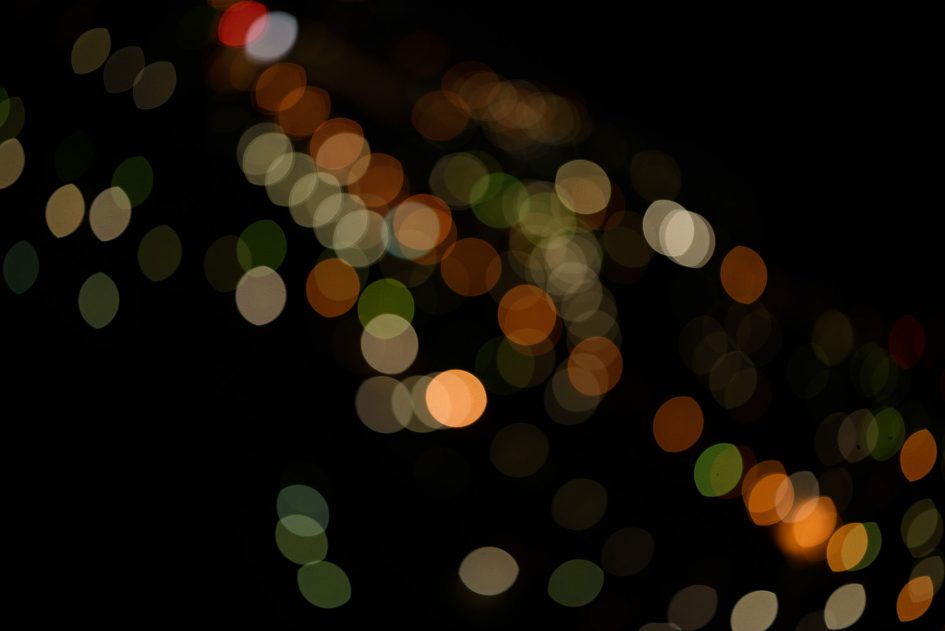 As the 50% crops above show: The Zeiss 135/2.0 produces pretty big Bokeh balls. It exhibits no onion rings and the light-distribution across the circle is very even. Outlining is also very moderate up into the FF/FX-corner. But there the cat’s eye effect reduces the size of the Bokeh balls quite seriously. There is only slight clipping from the mirror-box at the extreme bottom of the image. Let’s see how the Samyang compares:

The following shot with the Nikon was done another day on a D800.

The lens produces Bokeh balls a little larger than the Zeiss in the center and clearly larger than from both the Zeiss and the Samyang towards the corners. But it also shows green outlining from the strong longitudinal CAs. Plus there is some cut-off from the mirror-box up to f4.0. This shot is also available at f2.8, f4.0, f5.6, f8.0.

Now let’s see how this analysis of out-of-focus point-light sources translates into Bokeh-performance shooting a book-shelf. 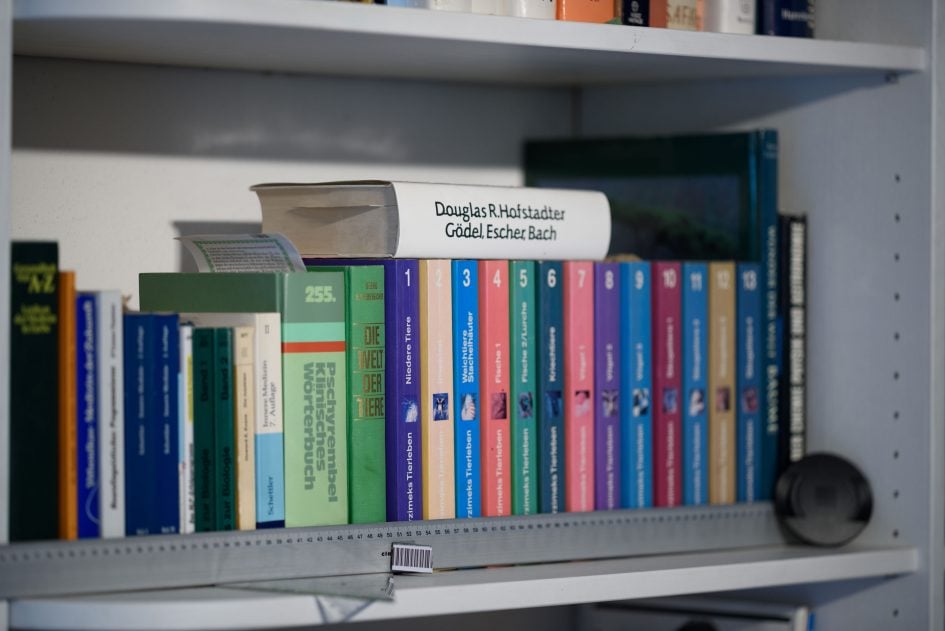 The (less important) foreground is nicely blurred and the middle ground stays clean of color artifact often seen with other large aperture lenses. But the background shows some outlining which makes the Bokeh a bit nervous. Let’s see how the Samyang and Nikon compare:

The Samyang is clearly more nervous in the foreground but produces the better blur in the background plus a much faster transition into blur in the middle-ground. Overall I prefer this Bokeh performance over the Zeiss. This shot is also available at f2.8, f4.0, f5.6, f8.0.

The problems of the Nikon with strong longitudinal CAs follow the lens in this test-shot at neutral DC settings: strong green coloration with magenta haloing shortly behind the plane of sharpest focus and ghastly green outlining in the background makes this the least desirable Bokeh of all three lenses. This shot is also available at f2.8, f4.0, f5.6, f8.0.

A strong light-source shining directly into the lens could produce strange colorful ghosts-images or reduce contrast considerably through flare and glare. The appearance of flare and ghosting depends on factors like the aperture and the angle of the light hitting the lens. So to judge the proclivity of the Zeiss for these artifacts I went through a series of well calculated shots against a strong light source to provoke flare, glare, and ghosting.

I found some circular artifacts at f2.0 seldom seen with other lenses and wonder whether this is a result of the blank metal mount of the lens hood. Ghosts could also be seen with the light outside the image circle. Closed to f8 the situation was better and ghosting was greatly reduced: 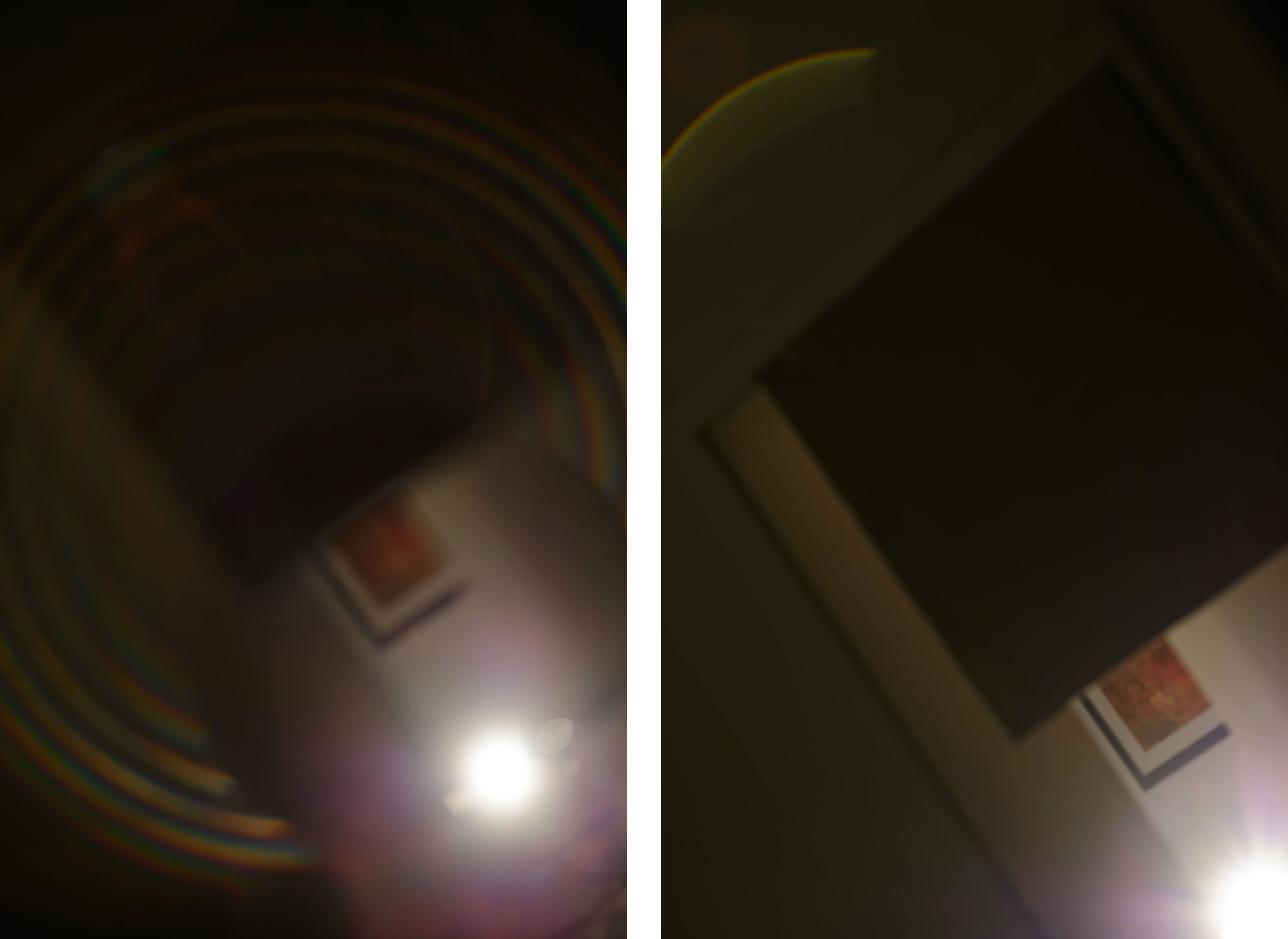 But outside these artifacts the blacks are really deep black. 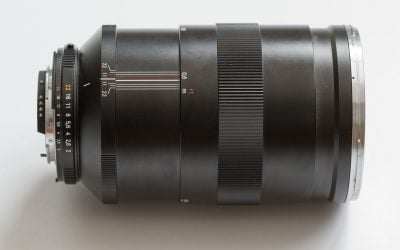