The Canon PowerShot SX70 HS is a super-zoom camera with DSLR-styling, 20 Megapixel resolution and a 65x optical zoom range equivalent to 21-1365mm. Successor to the four year-old SX60 HS, the new SX70 HS inherits the zoom range, side-hinged touch-screen and much the same body as its predecessor (albeit losing the hotshoe which is frustrating if you want to mount an external flash or microphone), but upgrades the 1 /2.3in type sensor from 16 to 20 Megapixels, couples it with the latest DIGIC 8 processor to gain 10fps shooting and cropped 4k video, and upgrades the viewfinder size and resolution. In terms of the lens range, the SX70 HS lens may now be out-gunned by the 125x zoom on the Nikon P1000, but 65x still covers virtually any situation and crucially Canon’s pitching it at almost half the price which, with the updates, makes it a very tempting option. I can’t award it more than four stars, because the increase in sensor resolution is accompanied by a reduction in low light performance at high ISOs. That aside, it's still the best small sensor / big range super-zoom out there at this price point and comes Highly recommended.

Check prices on the Canon SX70 HS at B&H, Amazon, Adorama, or Wex. Alternatively get yourself a copy of my In Camera book or treat me to a coffee! Thanks!

The Canon PowerShot SX70 HS is a super-zoom camera with DSLR-styling, 20 Megapixel resolution and a 65x optical zoom range equivalent to 21-1365mm. Announced in September 2018, it’s the long-awaited successor to the enormously popular SX60 HS released four years earlier. The new SX70 HS shares the same body, zoom and fully articulated screen mechanism as its predecessor, but upgrades the 1 /2.3in type sensor from 16 to 20 Megapixels, couples it with the latest DIGIC 8 processor to gain 4k video, and upgrades the viewfinder size and resolution.

The core specification of any super-zoom camera is of course the lens, and with the SX70 HS, Canon’s chosen to stick with the same optics introduced on its predecessor. These equip both cameras with the same 65x / 21-1365mm equivalent range taking you from ultra-wide to super-telephoto. While this remains an enormous range, it’s now out-gunned by the Nikon P1000 which boasts a vast 125x / 24-3000mm range with the same size sensor behind it (albeit with Nikon sticking with 16 Megapixels rather than 20 and also pricing the P1000 much higher).

DIGIC 8 allows the SX70 HS to now shoot faster at up to 10fps and film in 4k video at 25 or 30p although the 4k mode applies a fairly tight 1:1 crop like the SX740 HS and other DIGIC 8 models. Like its predecessor you can film 1080 up to 60p and also shoot stills in RAW, although a new Compact RAW option is also available. Meanwhile the electronic viewfinder has been upgraded in size and resolution from a 0.71 type / 922k dot panel to a 0.39 type / 2.36 Million dot panel. As on the older SX60 HS, the new model features Wifi for transfer of images and remote shooting, but adds Bluetooth, for seamless transfer of photos in the background while you shoot – a bit like on the Nikon COOLPIX B600 with which I’ve compared it in my review. Read on to find out which is the best super-zoom for you! 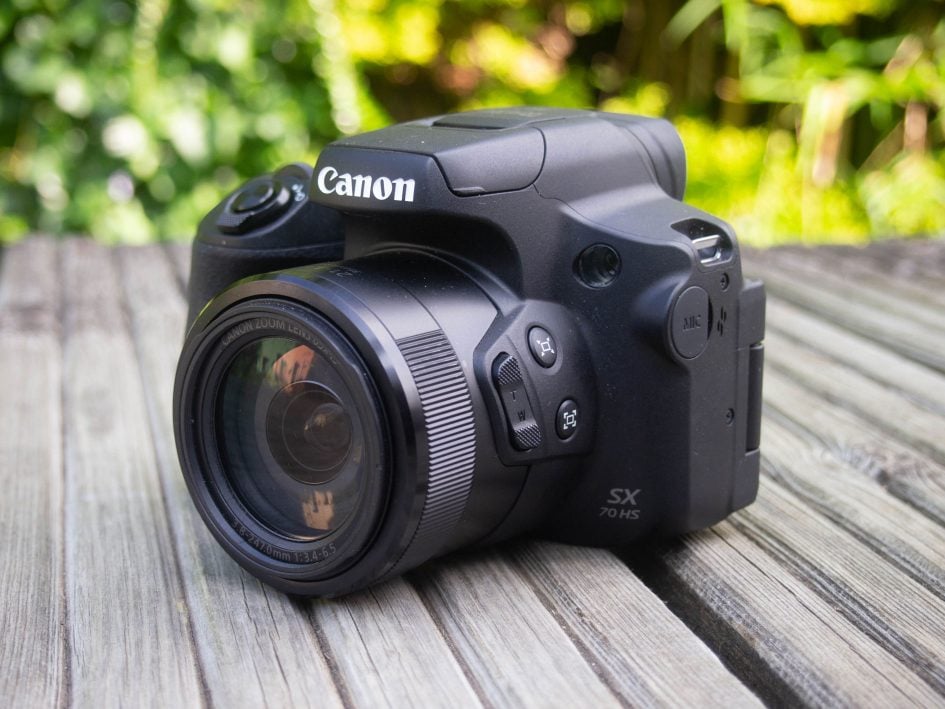 The PowerShot SX70 HS has a lot in common with the earlier SX60 HS and the SLR-styled body looks very similar- it’s similarly sized but 42 grams, or about an ounce and a half lighter. The plastic body is solidly constructed and, though bigger than the Nikon COOLPIX B600, fits comfortably in your hands thanks to a generous grip. One other thing to note here – the Frame Assists buttons are joined by a zoom rocker than can be used as an alternative to the one on the shutter release. 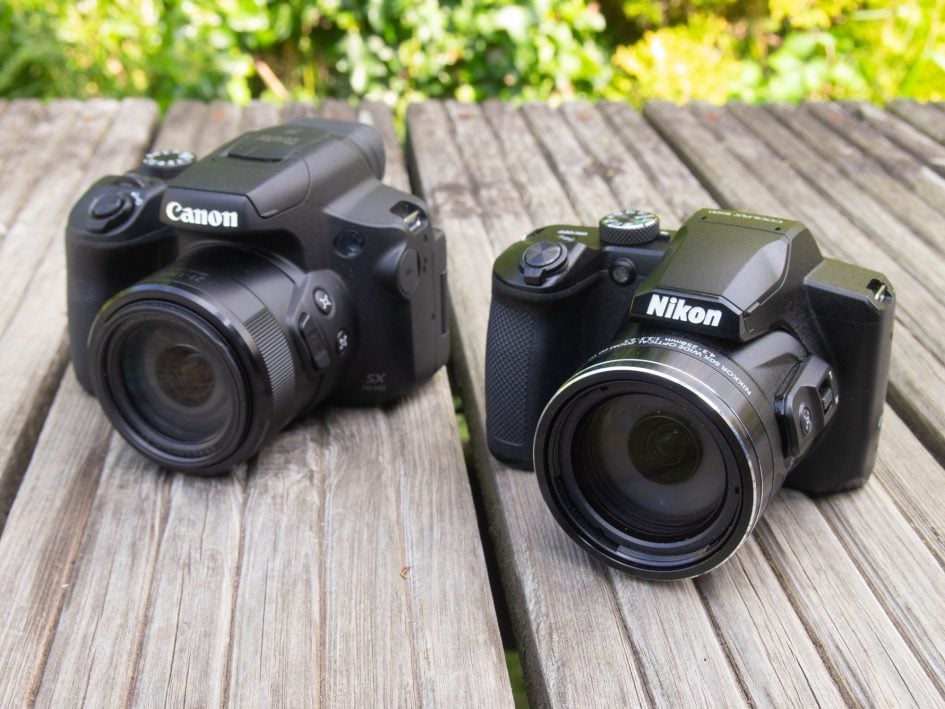 Here’s the PowerShot SX70 HS (left) alongside the Nikon COOLPIX B600. As you can see it’s bigger all round; it’s also a little heavier at 608g compared with 500g for the B600. The payback for that extra bulk is a built-in electronic viewfinder and a versatile fold-out screen – which I’ll talk more about next. 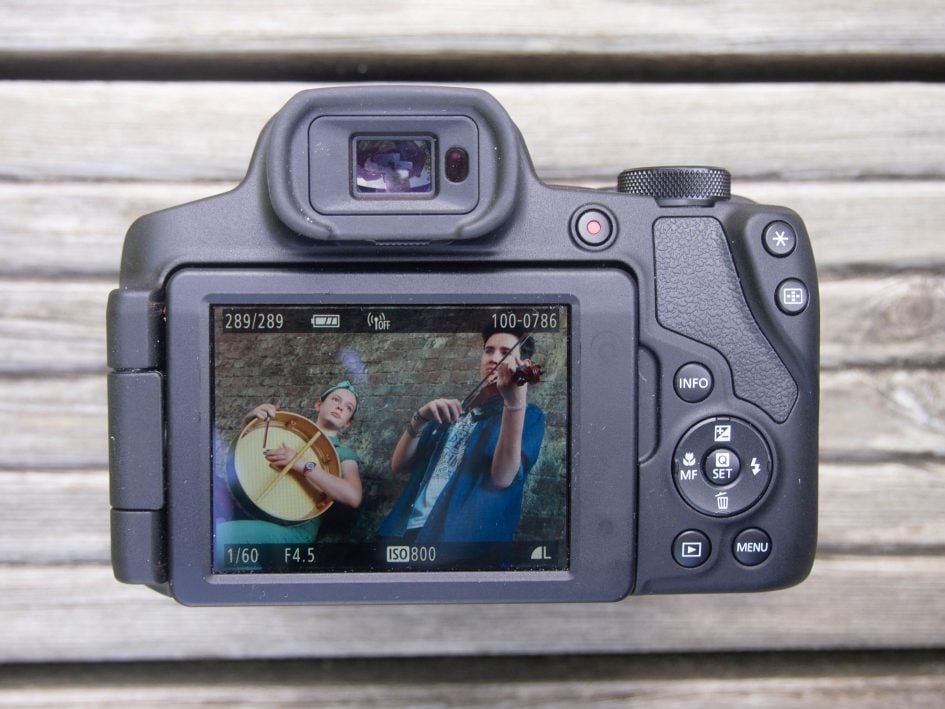 The PowerShot SX70 HS retains the 3 inch 922k dot screen of its predecessor, which can fold out and face in any direction including forward-facing and back in on itself for protection when not in use. The big news here though is the EVF, which has been upgraded from a 0.71 type / 922k dot panel to a 0.39 type / 2.36 Million dot panel. For a camera in this class it’s bright and detailed and I found it a big advantage for framing wildlife and other subjects when zoomed in. There’s also now a sensor to automatically toggle between the screen and the viewfinder when you put your eye to it. 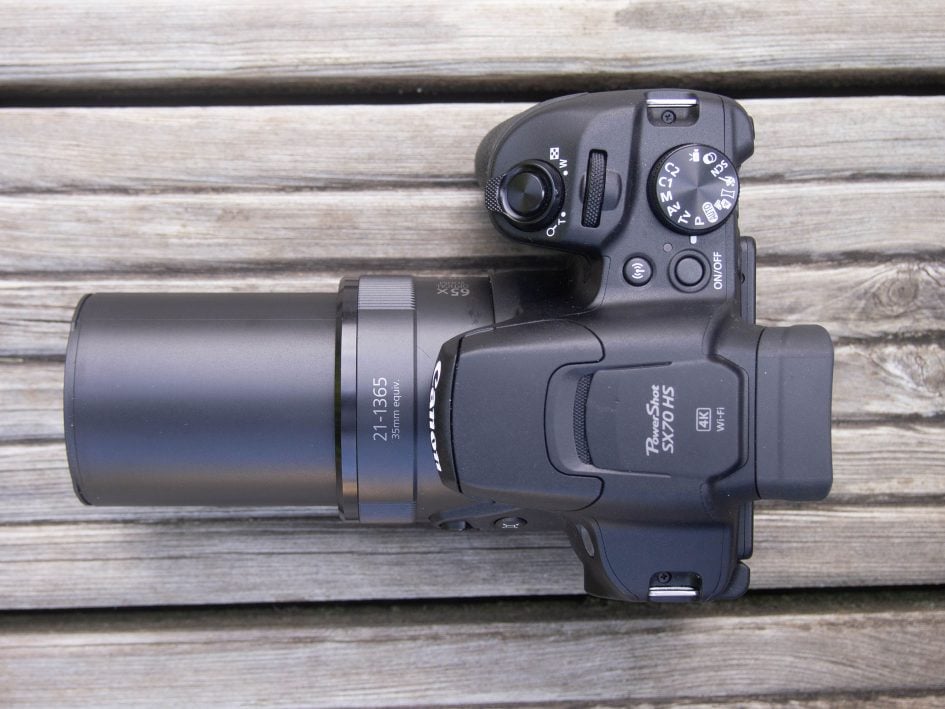 PowerShot SX60 HS owners looking at this will immediately spot that the older model’s flash hotshoe has been dispensed with on the SX70 HS. This is frustrating not just for those who want to mount an external flashgun, but also anyone wanting to exploit the unusual presence of a microphone input with a shotgun mic; instead you’ll need to use a bracket or simply connect a wired lav mic. At least the SX70 HS retains the built-in flash, which is activated by pulling it up from the body. As on the back, there’s been some tweaking with the buttons on the top and the programmable shortcut button has been replaced with a Wifi button. 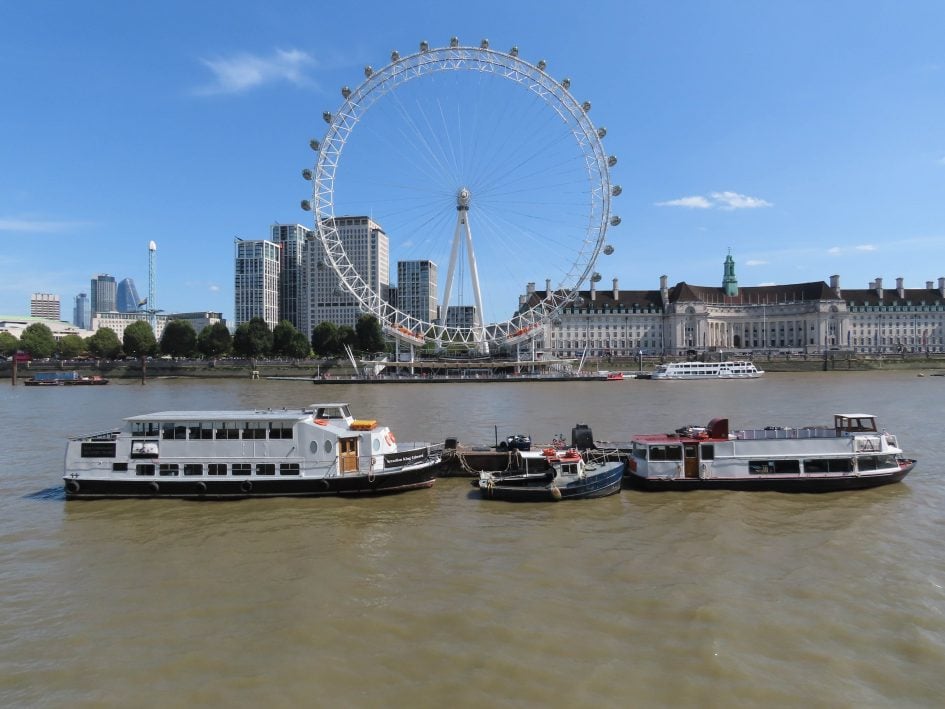 The SX70 HS sticks with the same 65x zoom lens introduced on the previous model. It has an equivalent range of 21mm- 1365mm with a maximum f3.4 aperture that closes to f6.5 when fully zoomed in. 21mm is about as wide as it gets on a fixed lens superzoom and a little bit wider than the 24mm of the COOLPIX B600. So you’ll have no problem shooting impressive landscapes and getting the entire first, second and third eleven in the frame for your club photos. 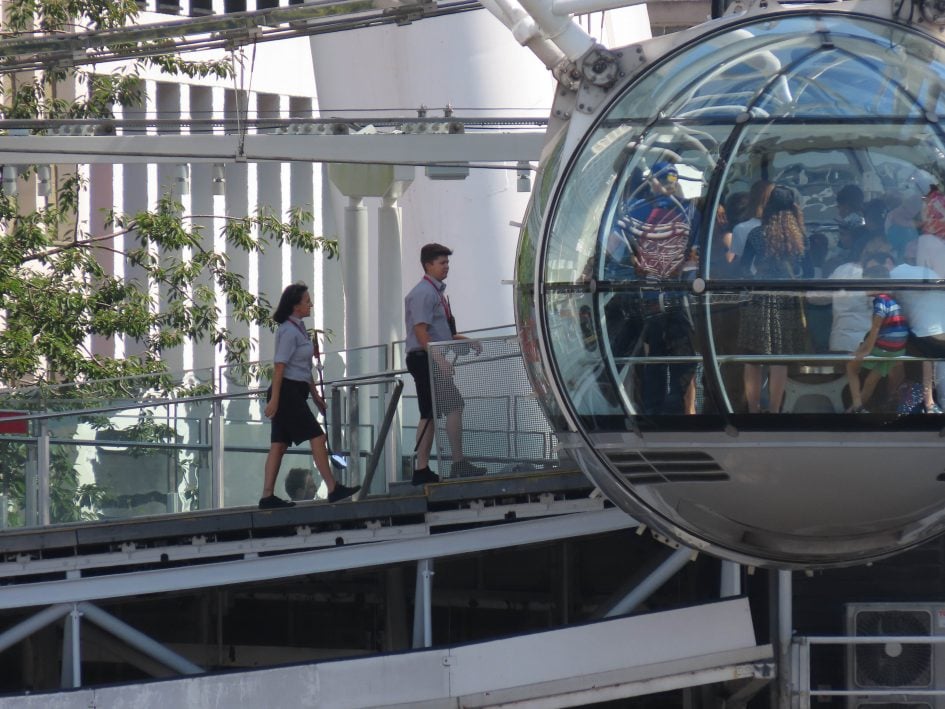 At the other end of the zoom range, the SX70 HS will get you to an equivalent 1365mm – just a little short of the 1440mm of the COOLPIX B600. The range of the SX70 is bigger than the B60 – 65x compared with 60x – but all of that advantage is at the wide angle end. That said, 1440mm doesn’t actually get you that much closer to the action, so don’t put too much stock in the numbers, and if you really need to get closer consider the (much more expensive) 125x Nikon P1000. 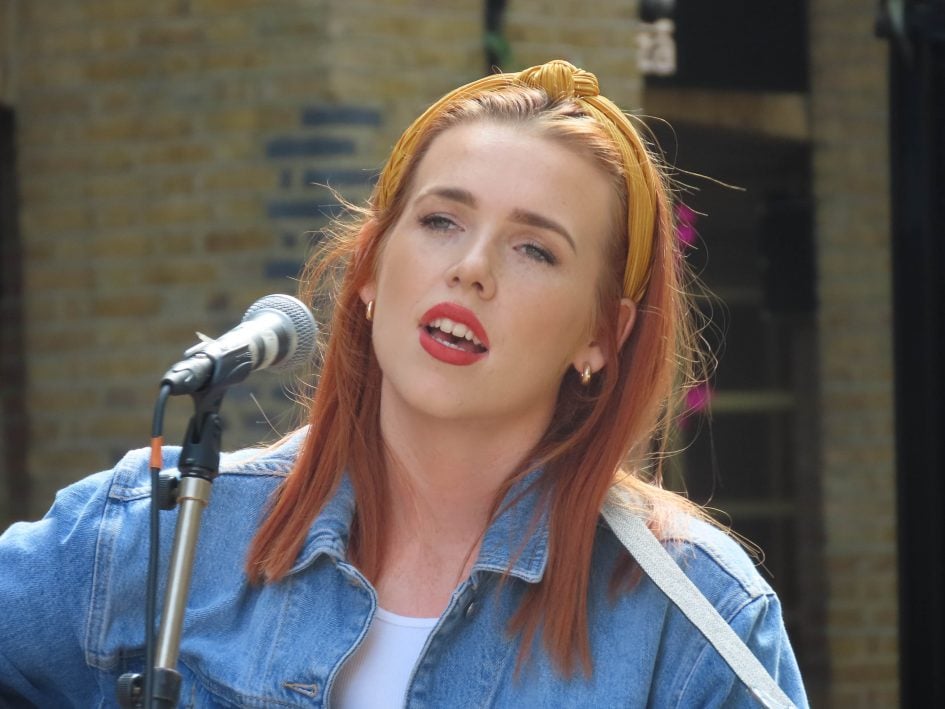 For this shot I put the PowerShot SX70HS into Aperture priority mode and opened the aperture as wide as it would go to blur the background. Zoomed in to just shy of 400mm that’s f5.6 and as you can see, the background is blurred, but not massively. 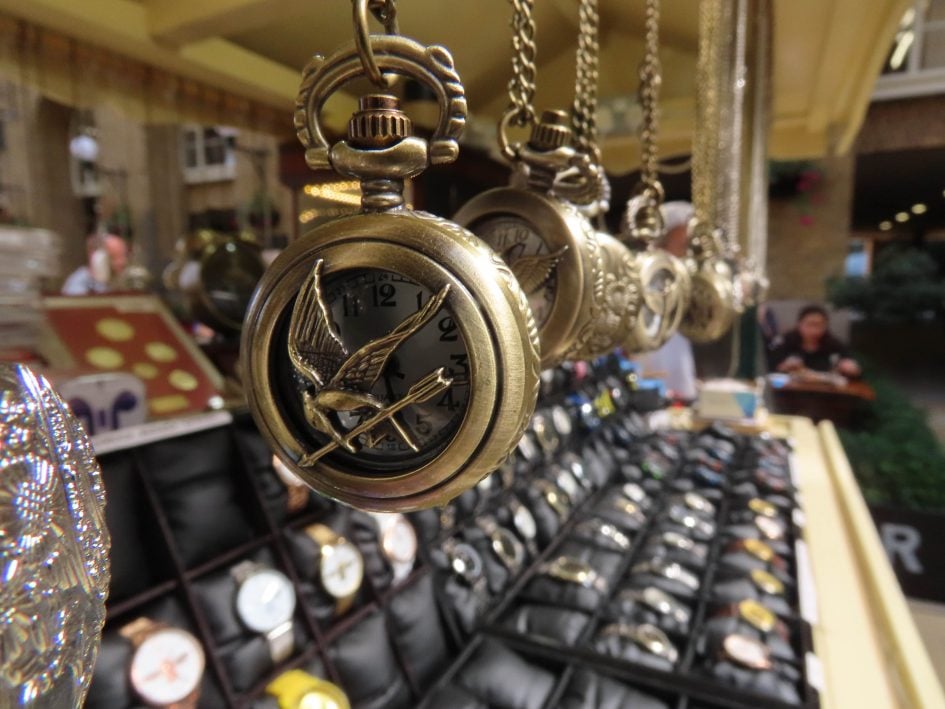 Like the COOLPIX B600, the PowerShot can focus as close as 1cm in macro mode. 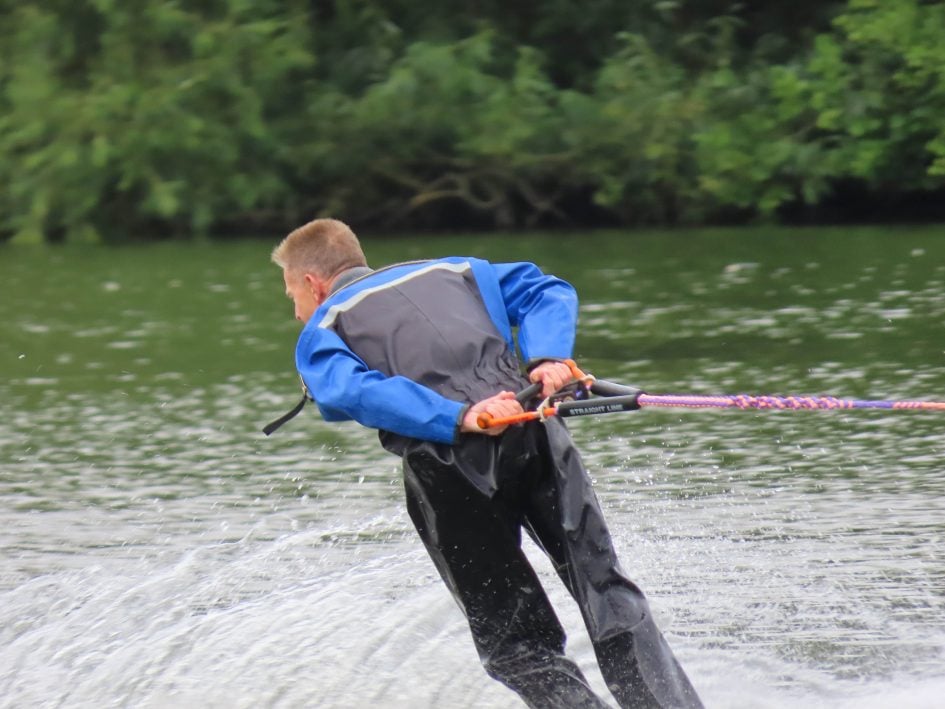 The upgrade to Canon’s Digic 8 processor means the SX70 HS can shoot continuously at 10fps a big improvement on the 6.5fps of the earlier SX60 HS. The 10fps speed is good for about 40 frames at the best quality JPEG setting, after which it slows to about 2fps. But that’s good enough to capture most kinds of action and it’s certainly a lot better than the COOLPIX B600 which can shoot for about a second at 7.7fps. The SX70 HS is also a lot quicker writing images to the card than the B600, so you can shoot another sequence almost immediately. 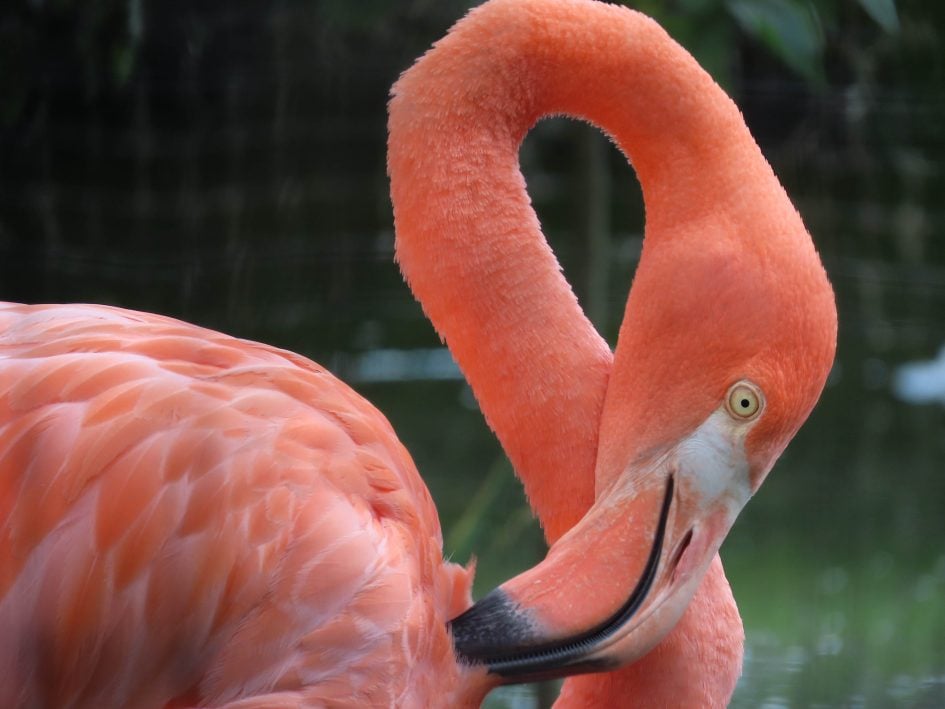 Though the PowerShot SX70 HS can’t zoom quite as far as the COOLPIX B600, it has two things that make capturing shots like this much easier. The first is the viewfinder – it provides a good clear view, even in bright sunlight and it’s easier to hold the camera steady with it pressed to your face. Both the SX70 HS and B600 have optical image stabilisation which also helps a lot, but with such long zooms, anything you can do to keep the camera steady helps. The second thing is the Framing Assist seek button, which you press to momentarily zoom out if you need to reacquire your subject, then release to zoom back to where you were. The COOLPX B600 has a similar feature. 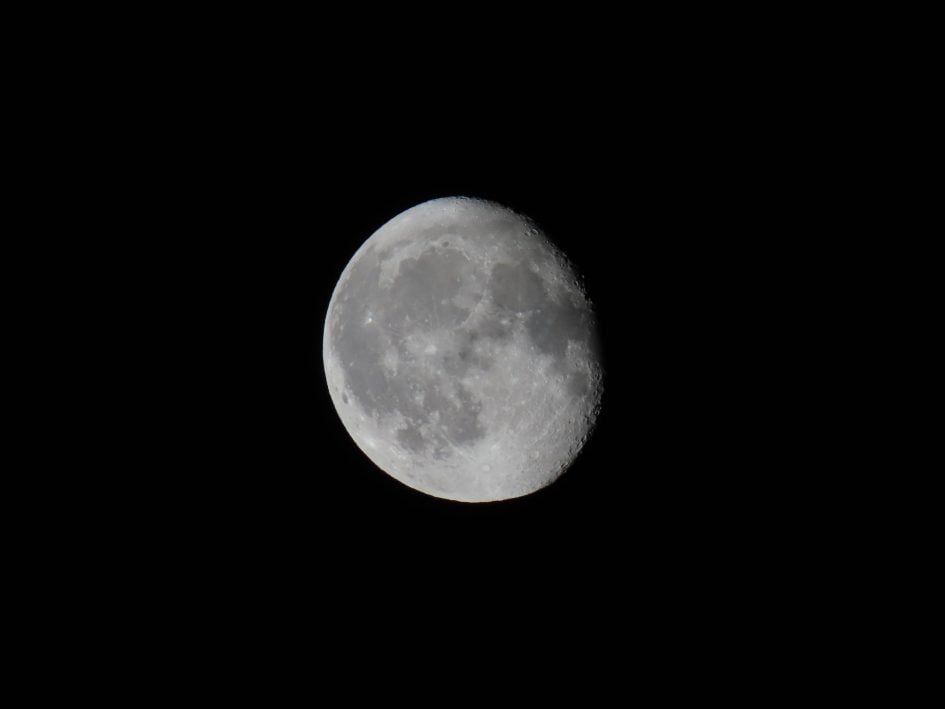 For this moon shot I placed the SX70 HS on a tripod – it’s almost impossible to do this handheld even with the stabilisation activated. This gives you a pretty good idea of how much magnification the 65x zoom provides – you can see plenty of detail on the lunar surface. If you compare this shot with the one from my COOLPIX B600 review, you’ll see that the latter’s extra reach (1440mm vs 1365mm) doesn’t make a huge difference. 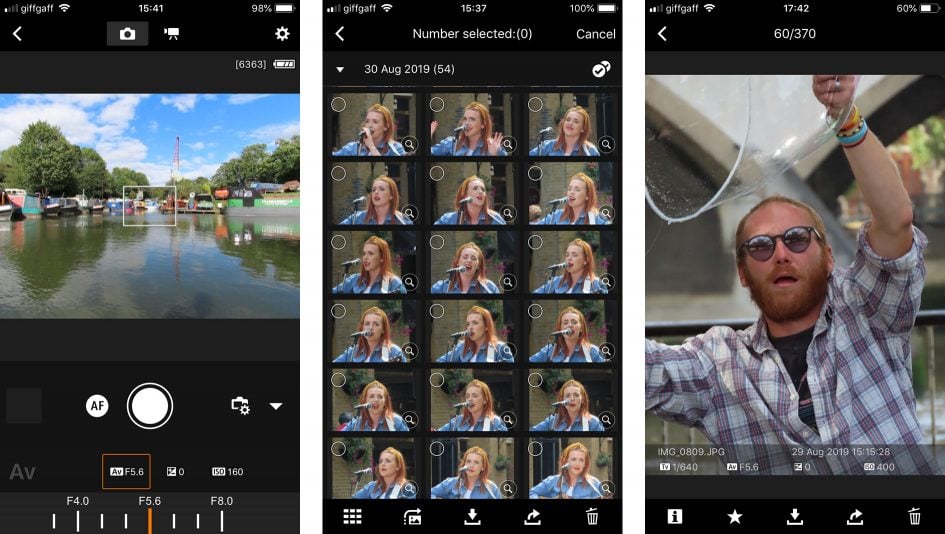 The PowerShot SX70 HS is equipped with Wifi and now Bluetooth. Like the COOLPIX B600 you can remote shoot (with a lot more control than the Nikon app provides) and transfer images to your phone over wifi. The Bluetooth connection allows you to transfer images in the background while you shoot, but it differs from the COOLPIX B600 in one crucial respect – The actual image transfer takes place over Wifi, so you have to have both Bluetooth and Wifi connections active. So it’s a bit tricker to set up and use than Nikon’s Snapbridge, but offers more functions and more control. 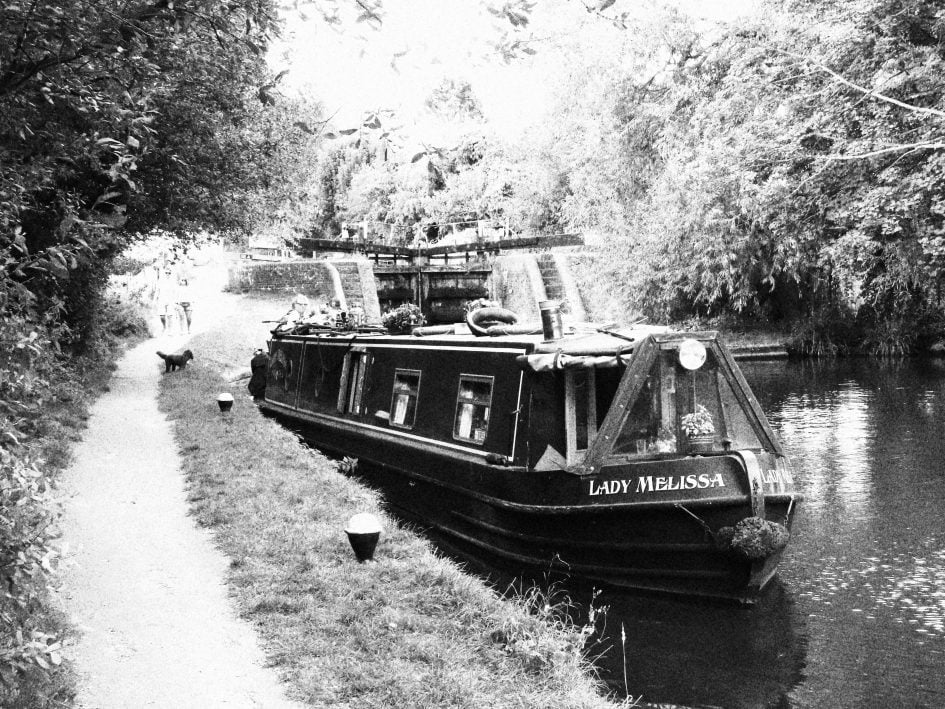 Switch the mode dial on the SX70 HS to the Creative Filters mode position and you have the choice of seven filters including Grainy B/W, (shown here) Soft focus, Fish-eye, Art bold, Water painting, Toy camera and Miniature.

This clip and the others below, except where stated, are recorded in the PowerShot SX70’s 1080/50p mode. It’s hard to fault, the exposure, white balance and quality are all good, the zoom doesn’t make a sound and the stabilisation is very steady when fully zoomed in. This clip is also available in 4K mode

For this clip I put the SX70 HS on a tripod and disabled the stabilisation. The fact that merely touching the camera when it’s fully zoomed causes frantic juddering shows you just how good a job the stabilisation does when it’s activated. The other thing worth noting is that the autofocus is very stable. Below you can see a 4k version of this same shot.

This 4K clip was shot from the exact same position as the 1080p one above. The SX70HS uses a 1:1 crop from the middle of the sensor for 4K video resulting in a smaller field of view. That means not such a wide angle, but the bonus is an effectively longer telephoto.

Here’s an indoor low light clip from the SX70 HS and again it’s hard to fault. The exposure and white balance are good and the mic has done a good job with the ambient noise and there’s also a socket for an external mic if you want to use one. This clip is also available in 4K mode

For this Moon clip I put the SX70 HS on a tripod and set the focus to manual – with the servo AF activated it was constantly adjusting. The SX70 HS has overexposed the Moon’s surface slightly, probably because the moon isn’t centre shot at the beginning of the clip. You could fix that by exposure compensation or switching to manual exposure.

Here’s the 4K version of the above 1080 clip and because of the 1:1 crop the moon almost fills the frame – the exposure and white balance are much better on this clip too.

Check prices on the Canon SX70 HS at B&H, Amazon, Adorama, or Wex. Alternatively get yourself a copy of my In Camera book or treat me to a coffee! Thanks!
Pages: 1 2 3 4 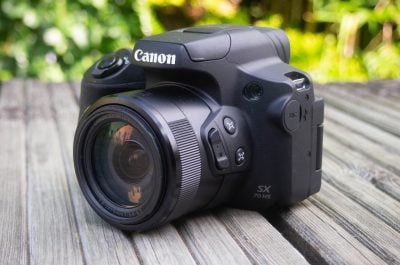 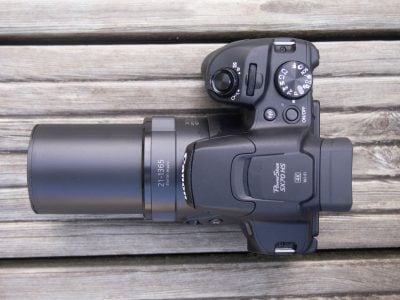 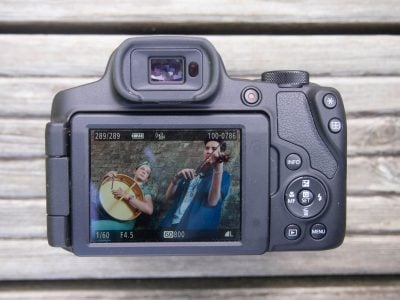