The Mitakon Speedmaster 50mm f0.95 III is an exotic and unusual lens: one of only three f0.95 models (all manual focus) available for full-frame bodies at the time of writing, and by far the cheapest too. Available in Sony E, Canon RF and Nikon Z-Mounts, it may not attain the optical heights of the considerably more expensive alternatives from Nikon and Leica, but it remains quite a likeable lens none-the-less. It offers a record f0.95 focal ratio in a much smaller and lighter package than the Z-Noct and much cheaper too at around 1000 EUR / 800 USD. The background Bokeh wide open is second only to the Nikon Z Noct and the light fall-off in the corners is astonishingly low for such a large aperture. But it has loads of optical aberrations: coma, astigmatism, spherical aberrations, haloing, low resistance against flare and glare, an ugly foreground Bokeh, not to mention almost half a stop lower light transmission than the Noct in my tests. This all makes it harder to nail focus manually wide open than with other, sharper lenses plus you have to operate the aperture manually too with no EXIF data transfer. But still: if you like the "look" of the Mitakon Speedmaster you can have a lot of fun with it, and again there's no other full-frame lens with an f0.95 focal ratio anywhere near the price. Recommended.

Check prices on the Mitakon Speedmaster 50mm f0.95 III at Amazon, B&H or Adorama. Alternatively get yourself a copy of my In Camera book or treat me to a coffee! Thanks!

The Zhongyi Mitakon Speedmaster 50mm f0.95 III was the first standard prime lens with the unique f0.95 focal ratio specifically designed for full-frame mirrorless cameras. A popular focal length for street photography and general-purpose use, it’s available in Sony E, Canon RF and Nikon Z-Mounts. Its f0.95 focal ratio gathers around two times the light of lenses with an f1.4 focal ratio. On a cropped sensor body it’s equivalent in angle-of-view and depth-of-field to a 75mm f1.4 lens. This is quite attractive for portrait photography and gives decent background isolation even on the smaller format sensor.

This lens was already at its third iteration at the time I tested it, with a slightly changed optical formula over its predecessors. But its biggest drawbacks remain: the lens is manual focus only which should limit its use with moving subjects and it does not have any electric contacts so the aperture has to be closed manually to the desired value and there are no EXIF-data nor lens-profiles being transmitted to the camera. But if you can live with these limitations the Mitakon Speedmaster 50mm f0.95 III at 1000 EUR / 800 USD is the cheapest option to get a lens with sub f1.0 focal ratio for your full-frame mirrorless camera. 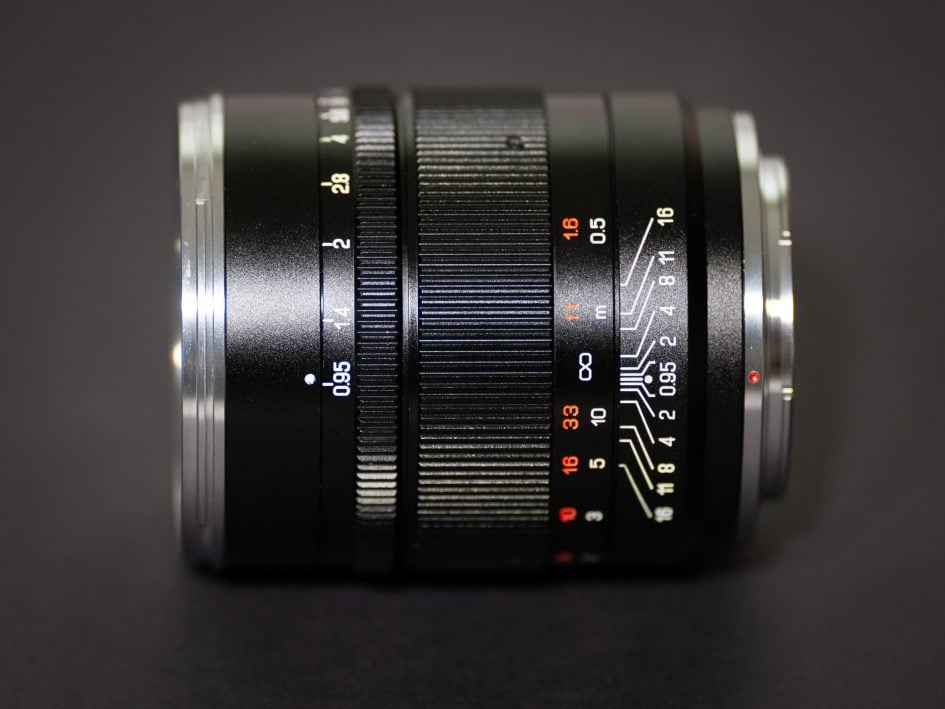 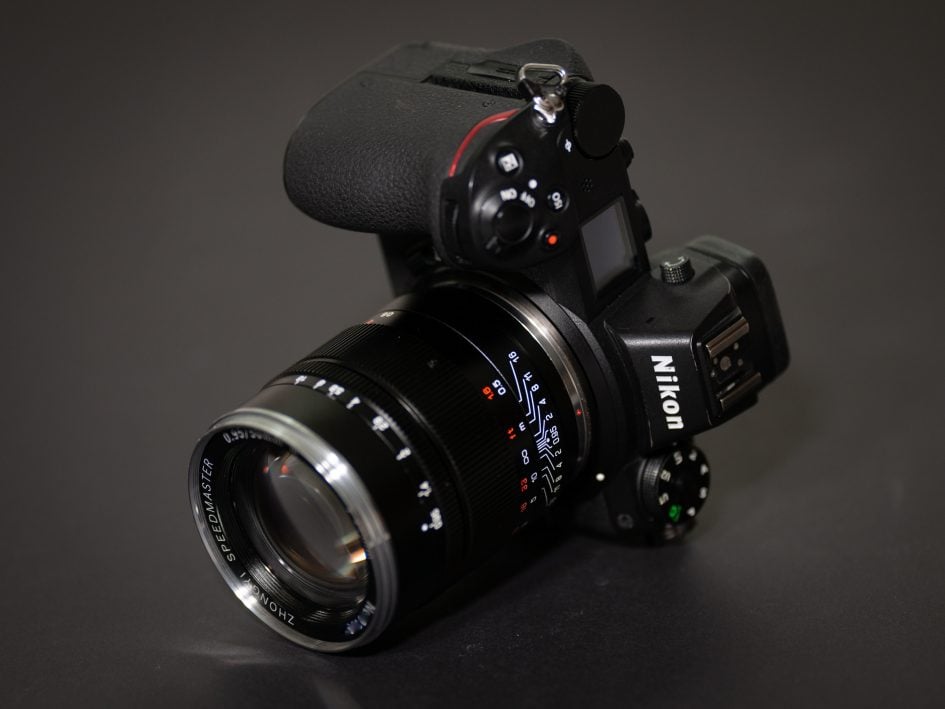 Auto focus: No, the Mitakon is manual focus only, just like the Otus and the Nikon Z Noct except that it turns the Canon/Sony way. There’s a large mechanically coupled dedicated focus ring which turns 320 degrees for very precise manual focus. The focus ring has a linear gearing which makes smooth focus pulling for videographers easy. The same is true for the Noct. The Otus has a slightly shorter throw of 250 degrees and turns like Nikon users are used to in its ZF.2 version. Of the lenses compared here, only the Nikon AF-S 58mm f1.4G offers autofocus. [-]

Lens profile: The Mitakon does not come with a lens profile but Lightroom and Photoshop provide one with vignette and distortion control. It’s listed under the manufacturer “ZY Optics”. [0] 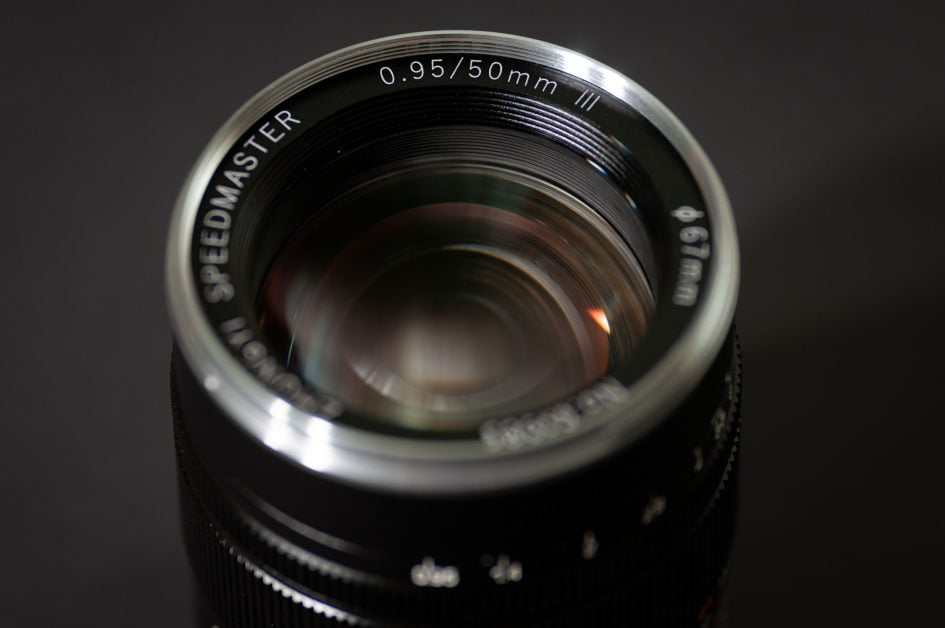 Comes with a padded lens case (without strap) and the lens hood is included and reversible for transport. [+]

Aperture ring: The Mitakon’s aperture can only be controlled from the ring at the front of the lens as it has no electrical or mechanical coupling between the lens and the camera. The ring has no clicks and can easily be moved accidentally especially as it is very close to the focus ring. The Mitakon does not transfer EXIF data about the aperture (or focus distance) to the camera which means that you have to set aperture manually and its value is not recorded in the image-file. Nailing the correct exposure is best supported with a live histogram in the view-finder. On the Nikon Z Noct there is a multi-function control ring which can be assigned to operate the aperture (this is the default) or exposure compensation – or you do this from the camera-body. The aperture is actuated electromagnetically. The Nikon AF-S 58mm f1.4G and most other alternatives don’t have an aperture ring. The Zeiss Otus offers one (Nikon ZF.2 version only) but that is of no use as the Nikon Z cameras (unlike the D850) do not allow to control the aperture from there. [-]

Sealing: no, just like the Otus. The Noct has a rubber grommet at the lens-mount plus further special weather-sealing throughout the construction. The Nikon AF-S 58mm f1.4G only has the sealing at the lens-mount. [-]

Adding another [++] for the unique focal ratio of f0.95 the score in the “features-department” of the Mitakon is 3[-]/5[0]/7[+]. The downsides to this lens: It has no autofocus and you need to set aperture manually too with no communication between lens and camera (incl. no EXIF data). But it’s moderately sized and the cheapest lens designed for full-frame sensors with an f0.95 focal ratio. 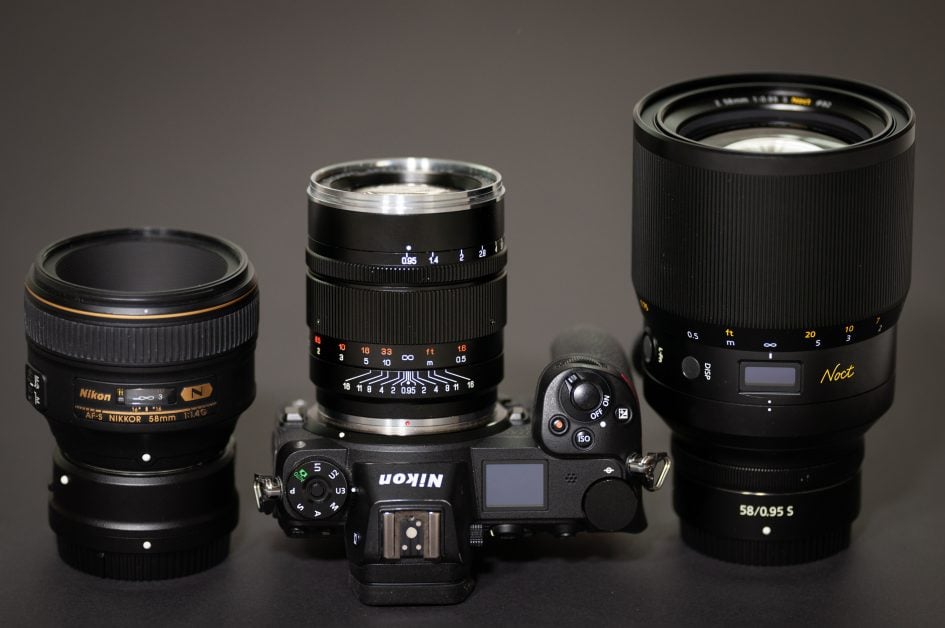 The market for standard prime lenses with focal rations of at least f1.4 is pretty crowded. But if you’re looking for f0.95 lenses overing a full-frame sensor there are really only two alternatives left after Meyer Optik Görlitz stopped manufacturing their Nocturnus 50mm 0.95 II: It’s the Nikon Z 58mm f0.95 S Noct (for Z-mount, around 9000 EUR) and the Leica Noctilux-M 50mm 0.95 ASPH (for M-mount, around 10,000 EUR) – both of which are manual focus only. Let’s have a closer look at the Nikon Z Noct:

Other alternatives include lenses with a 1/2 to 1 stop slower focal ratio of f1.2 or f1.4. Many of those can be used via adapter on a modern mirrorless camera from Canon, Nikon or Sony:

How big are the differences between 50mm and 58mm focal length? Here is the angle of view that the Nikon Z 58mm f0.95 S Noct covers on a full-frame body compared to the Mitakon 50mm f0.95 III:

As with all manual focus lenses I can only say: if you can’t manage to properly focus manually you better forget about this lens – and at f0.95 that is an even more daunting task. But modern mirrorless cameras offer focus peaking and a magnified viewfinder which makes it easy to focus precisely. It just takes more time and your target shouldn’t move. Compared to manual focusing the Nikon Z 58mm f0.95 S Noct I had more problems to nail focus with the Mitakon wide open: The bluish/purple halos around high contrast edges produced by the Mitakon (see next page) make it hard to see whether critical focus is reached, even in magnified live-view. Especially problematic is focusing outside the center – think the eye of a model – where the Mitakon is even less sharp. Focusing the Nikon Z Noct at f0.95 was far easier.

The focus ring is 19mm wide and has no slack/play between its movement and the focus-action and a throw of 320 degrees, which is ideal for accurate focus wide open. At the minimum object distance of 0.54m the barrel of the lens extends 7mm over the retracted status at infinity. The focus ring  moves relatively smooth but is still hard to operate with one finger. The benchmark here is the Zeiss Otus which has an excellent silky smooth operation. All those manual focus lenses have hard stops on both sides of the distance scale so you know exactly when you’ve reached one or the other end of the focus range. But the hard stop on the far end is a bit beyond infinity so you star-gazing photographers still need to find exact focus manually if you want to capture the Milky Way in all its sparkling glory.

As you pull focus, you’ll notice quite some focus breathing: the image of the Mitakon 50mm f0.95 III becomes 11% more magnified when I adjusted the focus from infinity to 0.64m. This is very visible and a disappointment for videographers. The Nikon 58mm f1.4G breathes 10%, Zeiss Otus 5%, Nikon Z Noct 16%.

Check prices on the Mitakon Speedmaster 50mm f0.95 III at Amazon, B&H or Adorama. Alternatively get yourself a copy of my In Camera book or treat me to a coffee! Thanks!
Pages: 1 2 3 4 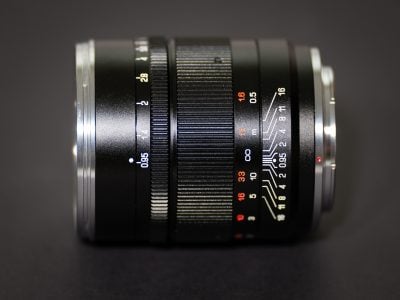 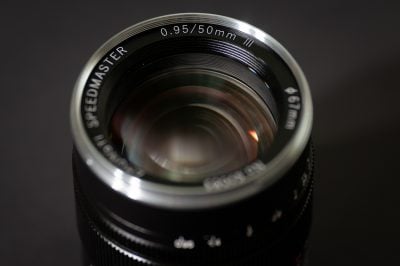 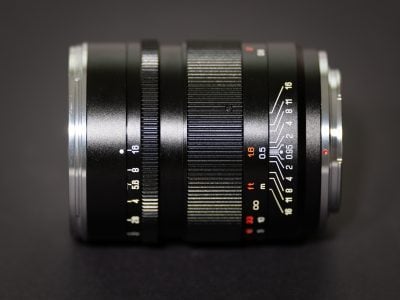