The Zeiss Batis 40mm f2 CF is a short standard prime lens designed for Sony e-mount mirrorless cameras and corrected for full-frame models. The 40mm focal length falls between more common 35mm and 50mm models, but is actually closest to ‘normal’ coverage on a full-frame system, making it an ideal general-purpose prime with natural results; meanwhile the CF stands for close-focus, with the ability to focus-down to 24cm for a greater magnification than most rivals. Like other Batis lenses it also features an OLED display for useful distance and depth-of-field information. In my tests the Zeiss Batis 40mm f2 CF proved to be very sharp across the full-frame sensor in close quarters and at longer distances, had almost no color aberrations, and produced only little coma. This performance comes in a sleek-looking and well-sealed package that is comparably light and small. But the lens is not without flaws. The most obvious being the quality of its Bokeh compared to faster rivals and the light gathering power of its f2 focal ratio. Neither can compete with f1.4 lenses. Then there’s the relatively high price which doesn’t even include a lens pouch. If you’re satisfied by the f2 aperture and its resulting bokeh and light-gathering though, the Zeiss Batis 40mm f2 CF is an attractive lens: sharp into the corners with low color aberrations and minimal coma, coupled with a useful close focusing ability. Combined with moderate size and weight plus thorough weather-sealing and solid build quality, the Zeiss Batis 40mm f2 CF earns a Highly Recommended!

Check prices on the Zeiss Batis 40mm f2 at Amazon, B&H, Adorama or WEX! Alternatively get yourself a copy of my In Camera book or treat me to a coffee! Thanks!

The Zeiss Batis 40mm f2 CF is a short standard prime lens designed to cover full-frame sensors and available in the Sony E-mount only. Announced in September 2018, it’s the latest member in the Batis series of five high quality primes lenses from Zeiss ranging from 18mm up to 135mm focal length. A special feature of this lens is its ability for close focus down to 0.24m (9.4in.) producing a magnification of 1:3.1. Thus the “CF” designation in the lens’ name.

On a full-frame camera the Zeiss Batis 40mm f2 CF delivers a field-of-view that’s 10 degrees wider than the standard 50mm lens (57 vs 47 degrees) and 7 degrees narrower than from a 35mm lens. It can still be considered a “normal” lens as its 40mm focal length is indeed closer to the 43mm diagonal of a full-frame sensor than a 50mm lens is. So images shot with this lens should produce a very natural and immersive perspective when viewed from a standard distance (equal to the diagonal of the print or monitor/screen). Use it on a Sony Alpha body with APS-C crop sensor and the Zeiss Batis 40mm f2 CF delivers a field of view that is equivalent to a 60mm lens. Combined with a bright f2.0 focal ratio it is well-suited for available-light use. 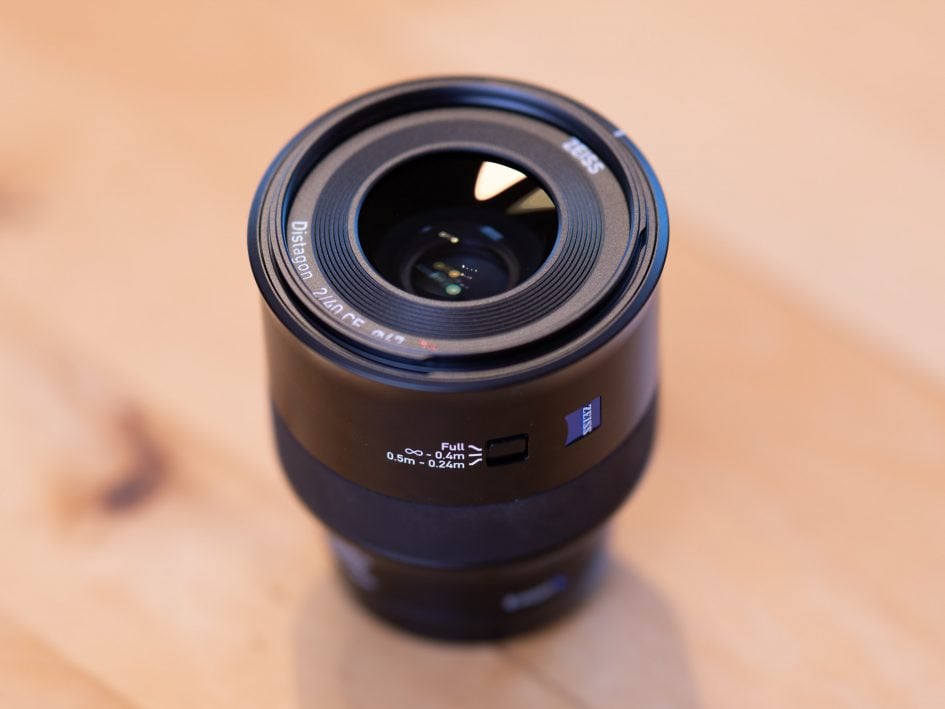 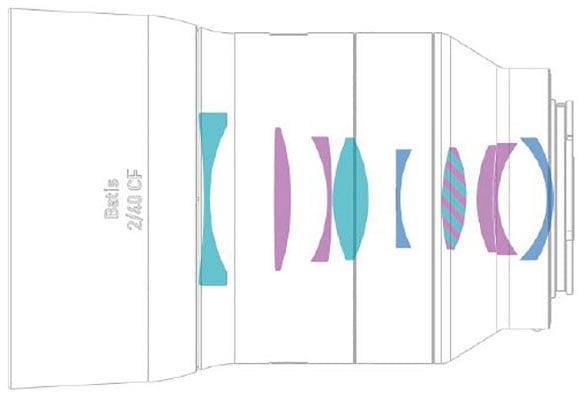 Auto focus: Built-in AF drive. Manual-focus override is by simply turning the focus ring. The focus ring has a non-linear gearing that allows for precise manual focus but makes smooth focus pulling for videographers almost impossible. The Zeiss Batis also offers a unique display for focus distance and depth of field. Unfortunately the display is hard to read under sunny conditions (in my photos of the lens you only see the factory sticker simulating the display). There’s also a focus limiter switch with three settings: full, infinity – 0.4m, 0.5m – 0.24m. Both Sony ZA lenses have no distance or dof markings. Focus on the Sigma Art works differently as it has a direct linear mechanical coupling between the focus ring and the focus action. It also offers the distance and dof markings that normally come with lenses designed for DSLRs. [+]

The Zeiss Batis lens comes in a nice package but has no pouch. The lens hood is included and is reversible for transport. The Sony 35mm f2.8 ZA also comes without pouch while the Sony 35mm f1.4 ZA has one. Only the Sigma Art comes equipped with what is fitting for lenses costing 4 figures: a nice padded pouch plus strap and a lens hood that is included and reversible for transport plus has a locking mechanism to prevent it from accidentally falling off. [-]

Aperture ring: no, just like the Sony 35mm f2.8 ZA and the Sigma Art. Only the Sony 35mm f1.4 ZA offers an aperture ring with 1/3 stop clicks which can be turned off for continuous, smooth, and noise-free operation. [0]

Sealing: yes, a rubber grommet at the lens-mount plus further special weather-sealing throughout the construction, just like the Sigma Art. Both Sony ZA lenses are similarly sealed inside but lack the rubber sealing at the lens-mount. [+]

The score in the “features-department” is 1[-]/3[0]/8[+] shows that the Zeiss Batis 40mm f2.0 CF is an attractive offering: It is small and light for a prime lens with a large f2.0 focal ratio, seems well built, and offers the unique features of an OLED display for distance and dof plus the ability to focus pretty close. Its biggest letdown is the missing pouch which is a disappointing omission when considering the price of this lens. 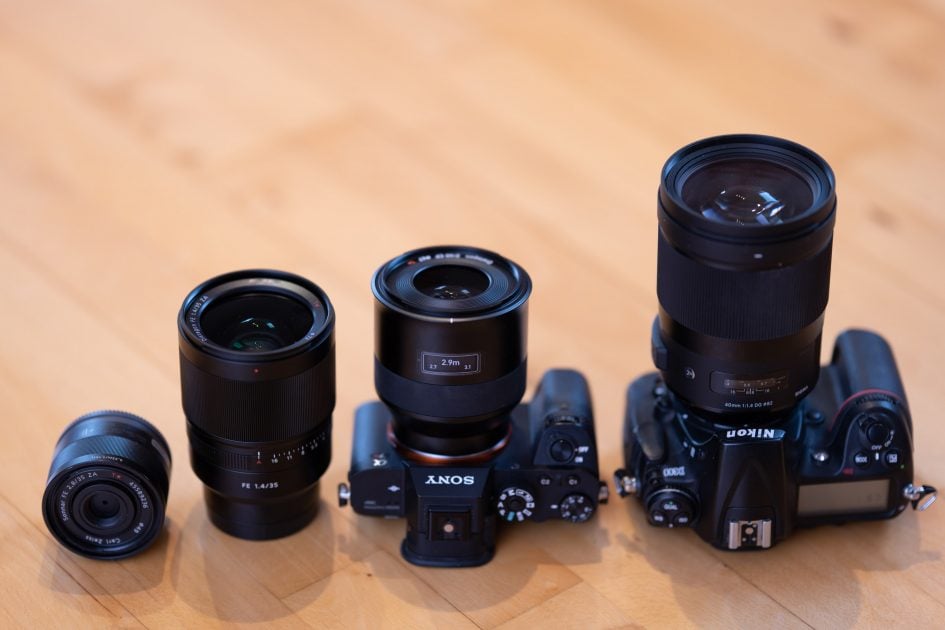 If you want a 40mm lens with a large focal ratio and autofocus there is only one alternative from Sigma:

Or you need to look at 35mm or manual focus lenses.

If you’re unsure of how big the differences between 50mm, 40mm, 35mm and even 28mm focal length are, here is the angle of view that the Zeiss Batis 40mm f2.0 CF covers on a full-frame body compared to the Sony 35mm f2.8 ZA:

Focus accuracy and repeatability is critical to consistently produce sharp shots especially with large aperture lenses. Repeatability (the accuracy of focus on the same subject after repeated focus-acquisition) of this lens is very good (measured 98.6% in Reikan FoCal) with no outliers over a series of 40 shots. And there is no focus variation whether the lens focuses from a closer distance or from infinity.

The lens focuses in around 0.35 sec on a Sony A7R II from infinity to 0.52m (1:10 magnification), which is very fast. Both Sony ZA lenses are slower at 0.5 sec and the Sigma Art takes the longest to focus at 0.7 sec (on a Nikon Z7 with FTZ adapter). The focus ring is 19mm wide. It moves very smoothly and can easily be operated with one finger. My only gripe is that the focus ring is pretty close to the camera body: I often missed it on the first try. Both Sony ZA lenses also offer very smooth focus by wire operation.Only the Sigma Art has a much stiffer mechanical coupling between the focus ring and the focus action.

AF-operation of the Zeiss Batis is inaudible from the outside or if you record video with the built-in microphone – as are both Sonys. Only the Sigma Art produces an audible focus noise. As you pull focus, you’ll notice some focus breathing: the image of the Zeiss Batis becomes 6% more magnified when I adjusted the focus from infinity to 0.52m. This could be distracting when shooting videos but is par for the course: the other lenses in this comparison all increase their magnification between 5% and 6%.

Check prices on the Zeiss Batis 40mm f2 at Amazon, B&H, Adorama or WEX! Alternatively get yourself a copy of my In Camera book or treat me to a coffee! Thanks!
Pages: 1 2 3 4 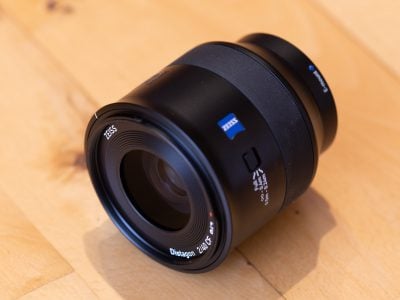 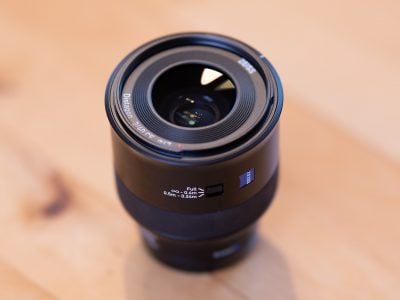 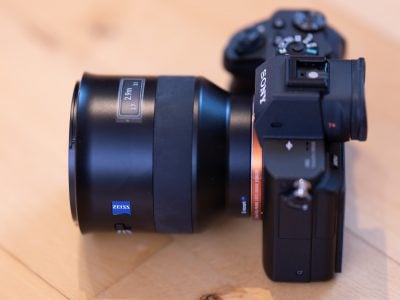