The Viltrox AF 85mm f1.8 II is the cheapest large aperture 85mm lens with autofocus for Sony E-mount, Nikon Z-mount and Fujifilm X-mount. It has a good Bokeh and can render very sharp details - when focused optimally. But field curvature makes it more adept for portraiture than for shooting flat or distant subjects. And there are other weaknesses too: longitudinal CAs, strong focus breathing, missing weather sealing, and low resistance against flare and glare in strong contra light. But if you're into portraiture and people photography those flaws might well be acceptable. With this caveat in mind I can still recommend the Viltrox AF 85mm f1.8 II.

Check prices on the Viltrox AF 85mm f1.8 II at Amazon, B&H or Adorama. Alternatively get yourself a copy of my In Camera book or treat me to a coffee! Thanks!

The AF 85mm f1.8 II from the Chinese manufacturer Viltrox is a short telephoto lens designed for mirrorless cameras and corrected for full-frame sensors. It is available in Sony E-mount, Nikon Z-mount, and Fujifilm’s X-mount. When fitted to bodies with APSC sensors, like Fujifilm’s X-series, the Viltrox 85mm f1.8 becomes equivalent in angle-of-view and depth-of-field to a 128mm f2.5 lens. The first version of the Viltrox lens came out in 2019 and the Mark II became available from the beginning of 2021. To my knowledge this is the first – and currently only – third-party lens for Nikon Z-mount with autofocus – probably based on Viltrox’s experience with their Z-mount adapters. The Viltrox AF 85mm f1.8 II costs around 350-400 EUR / 400 USD / 340 GBP and presents a direct alternative to Sony’s FE 85mm f1.8, Nikon’s Z 85mm f1.8 S, and Fujifilm’s Fujinon XF 90mm 2.0 R LM WR.

For this review I tested the Viltrox AF 85mm f1.8 II on the 45MP Nikon Z7 camera to judge optical performance and quality of autofocus against the Nikon Z 85mm f1.8 S. I also included comparisons with the Sony FE 85mm f1.8 shot on a 42MP Sony A7R II. So if you’re interested in how Viltrox’s second version of their 85mm f1.8 prime lens for mirrorless cameras performs, you’ve come to the right place!

Optics: 10 elements (including 5 special dispersion) in 7 groups. The absence of aspherical elements bodes well for the Bokeh: it should not be plagued by onion rings. The Z Nikkor is a 12/8 design, the Sony FE is 9/8. Viltrox’s marketing material mentions “Nano Multilayer Coating” on their AF 85mm f1.8 II to reduce flare, glare and ghosting and provide antifouling and water repellent qualities. [+]

Auto focus: Yes with built-in AF drive. Manual-focus override is by simply turning the focus ring. The focus ring has a mild variable gearing with a very long throw of 270-450 degrees. Focus on the Z Nikkor and Sony FE both have a more variable gearing. And the Sony also sports a customizable focus-lock button on the barrel. [+]

There’s an “USB upgrade port” on the lens mount to update the firmware, see below. The lens came with firmware v1.1.1, the latest version is v1.1.4 which I had no problems installing. [0]

Comes with a soft pouch and the lens hood is included, reversible for transport. That’s similar to the Z Nikkor. The Sony FE comes without a pouch. Mounting the lens hood on the Viltrox is a pretty fiddly affair. [0]

Aperture ring: None of the three lenses in this comparison has a dedicated aperture ring. But the multi-function control ring of the Z Nikkor can be assigned to operate the aperture, exposure compensation or focus. [0]

At a score of 2[-]/7[0]/5[+] the lens has no outstanding features. Its main selling point certainly is the low price but it does not even offer basic weather protection at the lens mount and it is a bit on the heavy side for an f1.8 lens.

Large aperture 85mm lenses are sort of everybody’s darling: they allow for good background isolation on APS-C/DX and FF/FX cameras alike and produce nice Bokeh. They are good for portraiture but can also be used for other types of photography as well. So it’s no wonder that many lens manufacturers offer at least one lens in this category.

But if you’re looking for 85mm autofocus lenses with f1.8 aperture which as a general rule should be smaller, lighter, and cheaper than their f1.4 brethren the choices slim down considerably:

Focus accuracy and repeatability is critical to consistently produce sharp shots especially with large aperture lenses. Repeatability (the accuracy of focus on the same subject after repeated focus-acquisition) of this lens is one of the poorest I’ve seen so far since testing lenses for mirrorless cameras. There were no real outliers over a series of 40 shots but AF consistency still measured only 93.6% in Reikan FoCal. The Z-Nikkor achieves a consistency of 98,5%. So there is quite some focus variation as you can see in the (near 100%) crops below.

That might not look like much and you probably will not notice it when viewing an image in the viewfinder. But at a guess I think that’s about a 15% difference in resolution that you’re at risk losing due to the variance in AF performance. This might be a problem of my individual copy but I rather suspect that Viltrox did not implement the communication between its lens and a Nikon Z camera properly. Nikon has patents on the interface which might prohibit a full implementation. Please note that I only tested the Viltrox on a Nikon Z camera – so the lens might autofocus perfectly well on a Sony or Fuji camera.

Another indication of Viltrox’s struggle with the lens-camera communication might be that turning the focus ring on the lens at first on my own Z7 body did not only change focus but also changed exposure compensation at the same time. I usually set the custom control assignment of my Nikon Z7 to control exposure compensation from the lens control ring that every Z-Nikkor so far is equipped with. It turned out that the focus ring of the Viltrox represented itself as a focus ring and a custom control ring to the camera. Switching the assignment for the custom control ring to OFF remedied the unwanted consequences, fortunately.

Regarding focus speed: The Viltrox focuses in around 0.8 sec from infinity to 1m (1:10 magnification), which is a tad slower than the Z Nikkor or Sony FE. I encountered the occasional hunting even under well-lit test conditions and I had cases where the lens refused to find focus at all. The focus ring is 39mm wide. Its surface is not rubberized and feels a bit too smooth for good grip especially as it does not move as easily as on the Z Nikkor of Sony FE.

AF-operation of the Viltrox is barely audible from the outside. If you record video with the built-in microphone the AF-drive produces only a low whir. If you pull-focus, you’ll notice very visible focus breathing: when I adjusted the focus from infinity to 1m on the Viltrox, I measured an 18% increase in magnification. This is pretty disappointing for videographers.

Check prices on the Viltrox AF 85mm f1.8 II at Amazon, B&H or Adorama. Alternatively get yourself a copy of my In Camera book or treat me to a coffee! Thanks!
Pages: 1 2 3 4 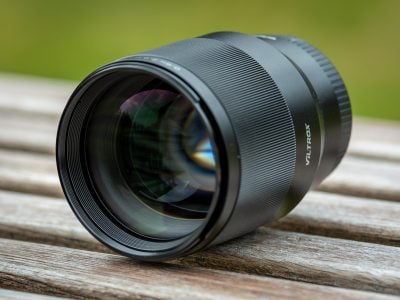 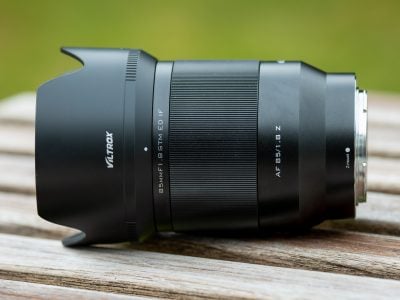