Pictured below from left to right are the Tamron, Nikkor and Sigma 18-200mm lenses zoomed-out to their shortest positions. Each lens measures 73x84mm, 77x97mm and 70x78mm (diameter x length) respectively. The Sigma’s clearly the smallest of the group, with the Tamron measuring roughly in-between it and the larger Nikkor. 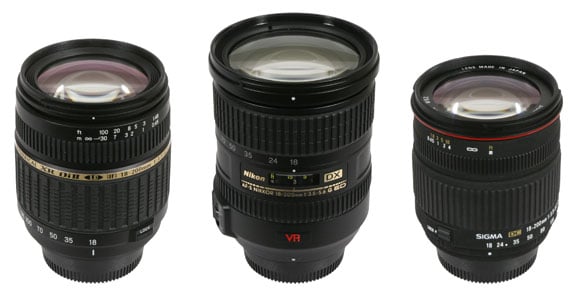 When zoomed-in to their longest focal lengths, the Tamron, Nikkor and Sigma lenses extend by a further 66, 65 and 53mm respectively, each employing two barrel sections. As pictured below, the Sigma remains the smallest of the three and the Nikkor the largest, with the Tamron again coming up in-between. The Nikkor’s larger size is reflected in its 72mm filter thread, which is considerably greater than the 62mm threads of the Tamron and Sigma. 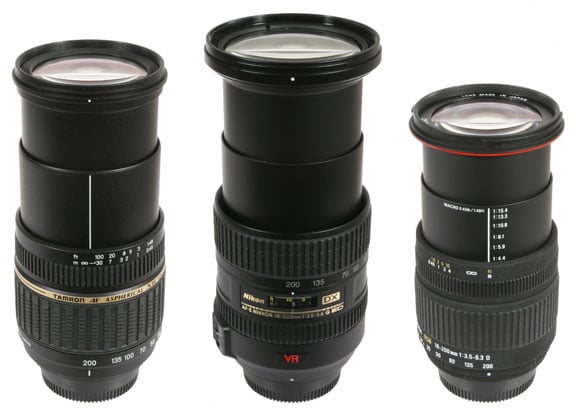 Weighing 423g, the Tamron’s only 18g heavier than the Sigma, and both are noticeably lighter than the 560g of the Nikkor. The Nikkor’s additional weight is undoubtedly down to its superior build quality and slightly faster optical performance at the telephoto end. It sports a focal ratio of f3.5~5.6, compared to the f3.5~6.3 of the Tamron and Sigma models.

In terms of build quality, the Tamron and Sigma are roughly similar. They’re both lightweight budget lenses so unsurprisingly feel quite plasticky with less smooth mechanics than a premium product. Don’t get us wrong, they’re not poorly constructed, but are clearly below the build quality of more expensive lenses.

For example, you need only compare them with the Nikkor 18-200mm to immediately notice how this pricier model looks and feels to a much higher standard. It’s more solid with smoother mechanics delivering a greater impression of confidence in use. Of course the Nikkor costs twice as much, but if you’re after the best build quality, you’ll need to spend the extra.

We’re pleased to report all three employ internal focusing with non-rotating end sections – important for anyone who uses polarisers, although obviously the Nikkor’s wider thread will incur higher-priced filters. Thankfully, all three lenses were supplied with hoods.

In terms of focusing speed, the Nikkor’s premium SWM system was certainly quicker than the Tamron and Sigma, but not by a large degree. Where they really differed though was in focusing noise with both the Tamron and Sigma models being considerably louder than the Nikkor. The Tamron was worst of all in this respect, grinding quite conspicuously during manually focusing. Again if ultimate discretion is your thing, you’ll need to spend more on the Nikkor.

All three lenses on test claim the same 18-200mm focal length, but it’s always worth putting this to the test. To compare actual coverage we shot the same scene with each lens within a few moments of each other; the camera was mounted on a tripod to ensure a consistent position. Here the lenses were set to their widest 18mm focal length.

At first glance the three lenses on test appear to deliver identical wide-angle coverage, but look closer and there’s subtle differences. The Tamron 18-200mm actually delivered a fractionally wider view at 18mm than the others, followed closely by the Nikkor, and finally the Sigma.

Next up came the telephoto-end of each lens. Again to compare actual coverage we shot the same scene with each lens within a few moments of each other; the camera was mounted on a tripod to ensure a consistent position. Here the lenses were set to their longest 200mm focal length.

Here all three lenses performed similarly, although upon close examination, the Nikkor’s field was fractionally tighter than the others. In practice though it’s fair to say all three lenses deliver essentially the same field of views.

Note: both the Tamron and Sigma lenses were fitted with zoom lock switches to prevent their barrels from extending beyond the 18mm focal length while in transit. That said neither barrels of the models on test could be described as loose, and it was possible to zoom-in to 200mm on both, point vertically upwards and not suffer from any creep back down. The Nikkor lens didn’t have a lock, but could be pointed up or down without suffering from discernable creep.

To measure geometric distortion we photographed a test chart consisting of a grid pattern with perfectly straight lines. The lenses were tested at their widest focal length with an aperture of f8 using a Nikon D2X in Aperture Priority mode. The images were analysed with Imatest using 5th Order line calculation and the full areas presented here at a reduced resolution.

All three lenses exhibited roughly the same degree of barrel distortion at their wide angle setting, although the Sigma model managed the best result here.

To measure lens vignetting and light fall-off we photographed a white target with a highly diffused filter. The lenses were tested at their widest focal length with the aperture wide open using a Nikon D2X in Aperture Priority mode. The images were analysed with Imatest and the full areas presented here at a reduced resolution. Bigger percentages are better.

With light falling off to an average of 52.6% in the corners, the Tamron scores almost identically to the Sigma, although both are noticeably worse than the Nikkor model. Light fall-off in the corners would be much more apparent on these cheaper lenses at wide angle.