The Tamron 85mm f1.8 VC is a unique lens, combining very good optical performance with image stabilisation at a reasonable price. In fact it was the first stabilised large aperture 85mm prime for Canon and Nikon users, and while Canon has since released its brighter EF 85mm f1.4L IS USM with stabilisation, the Tamron is half the price. Its autofocus is reliable (after some tweaking) and the package is not too large or heavy to become intimidating. As an overall package it earns a Highly Recommended.

Check prices on the Tamron SP 85mm f1.8 at Amazon, B&H, Adorama, or Wex. Alternatively get yourself a copy of my In Camera book or treat me to a coffee! Thanks!

The Tamron SP 85mm f1.8 Di VC USD is a stabilized full-frame short telephoto lens available in Canon, Nikon, and Sony A mounts. Announced in February 2016, it complements the series of stabilized f1.8 primes from Tamron. The new lens is also compatible with Tamron’s new USB dock for fine-tuning AF and VC or firmware updates, called the TAP-in Console. This console was not yet available at the time of writing. Image stabilization of fixed focal lenses below 100mm length is an important move that reflects the development of ever-higher Megapixel sensors. With 36MP, 42MP and 50MP full-frame sensors as well as 24MP APS-C/DX sensors it is increasingly hard to achieve really sharp shots devoid of (micro-)blur. The old 1/focal-length rule for shutter-speeds that are on the safe side no longer applies for the pixel-densities of modern sensors: today we’re more talking about using 1/160 sec on an unstabilized lens of 85mm focal length. But with good image stabilization (dubbed “Vibration Control”/VC by Tamron) there’s hope to get sharp shots at this focal length hand-held at around 1/20.

To find out how it performed I tested the Tamron SP 85mm f1.8 VC on Nikon’s 36MP D810 and compared the results against the Zeiss 85mm f1.4 Otus as the benchmark. 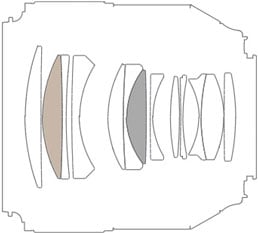 Optics: 13 elements in 9 groups. It includes two low dispersion elements and coating with a nano-structured layer. Plus fluorine coating at the front lens for easier cleaning. The Nikon 85/1.8 with 9 elements in 9 groups is a simpler construction but with the same number of glass/air surfaces. [+]

Filter-thread: 67mm. Those filters are cheaper than the professional standard 77mm filters which are widely used. But chances are you may not have this size yet. Same with the Nikon 85/1.8. [0]

Image stabilization: Yes, except when you buy the Sony version which relies on the body-based stabilization of the Mark II full-frame A7 models. For Canon and Nikon users there is no other stabilized large aperture 85mm lens. Only the Zeiss Batis 85/1.8 offers optical stabilization for Sony E-mount. [+]

Autofocus: USD (Ultrasonic Silent Drive), so it also works on bodies that don’t have a built-in AF drive like the Nikon D3x00/5×00. Manual-focus override is by simply turning the focus ring. Same with the competition. [+]

The lens hood is included and reversible for transport, the lens caps are are similar to Nikon’s pincer-type. The lens hood does not cast a shadow from the in-camera flash at 85cm shooting distance. But again Tamron decided to deliver a 800+ EUR lens without a lens case. [-]

Aperture: no aperture ring as with most other alternatives. But the lens features an electromagnetic diaphragm like Nikon’s newest “E” lenses. [0]

Sealing: A rubber grommet at the lens-mount and additional sealing. Plus fluorine coating at the front lens for easier cleaning. [+]

The score in the “features-department” is 1[-]/5[0]/7[+]. In direct comparison to the Nikon 85/1.8 the new Tamron 85/1.8 VC is larger, heavier and more expensive – but all within reasonable range. The big plus is the image stabilization which in my opinion was long overdue to come to a large aperture 85mm lens. Kudos to Tamron to offer this to Nikon and Canon users!

– For Sony mirrorless cameras specifically there’s the Zeiss 85mm f1.8 Batis with optical stabilization which can work together with the body-based stabilization for around 1200 EUR.

– Sigma offers the AF 85mm 1.4 EX DG HSM lens from 2010 which has no image stabilization and costs around 800 EUR. It received a Recommended in my Sigma 85/1.4 review. And Sigma has finally updated this lens to fit in their “Art” series. The new lens costs 1250 EUR and got a Highly Recommended. See my Sigma 85/1.4 Art review.

– If you can work with manual focus there are two major (non-stabilized) alternatives to consider which offer the benefit of a 2/3 larger focal ratio (but no stabilization) over the Tamron: The Samyang/Rokinon/Walimex 85/1.4 AE for around 350 EUR (see the Samyang 85/1.4 review) and the Zeiss 85/1.4 Otus which earns a Highly Recommended in my Zeiss 85/1.4 Otus review review but also costs around 3900 EUR. Optically the Zeiss Otus can be considered the benchmark for 85mm lenses.

Focus accuracy and repeatability is critical to consistently produce sharp shots. Repeatability (the accuracy of focus on the same subject after repeated focus-acquisition) of this lens is very good (measured 98.8% in Reikan FoCal) with only one mild outlier over a series of 40 shots. I had to fine-tune AF by -2 in camera for optimum phase-detect AF at medium distances (3-4m) but it seems that the lens still overshoots a bit at infinity shots. I’ll test the TAP-in Console as soon as it becomes available to see whether I could adjust the infinity focus a bit better.

The lens focuses very fast in around 0.5 sec from infinity to 0.85m. The 26mm broad focus ring has no slack/play between its movement and the focus-action. Its movement is of medium smoothness. Focus throw is 95 degrees so manual focusing at f1.8 is relatively easy. It turns the same way as Canon photogs are used to but that is the wrong way for Nikon users. AF-operation is barely audible from the outside and if you record video with the built-in microphone there’s only a slight “tock” at the beginning of focus-movement and the AF-drive is very quiet. The image stabilizer is virtually silent on the outside and when recording video there’s only a very faint beeping sound recorded. As you pull focus, you’ll notice some amount of focus breathing – this is where the image becomes more magnified at closer focusing distances. When I adjusted the focus from infinity to 0.85m on the Tamron, I measured a 19% increase in magnification which is quite noticeable.

To test the effectiveness of the image stabilization I did a series of well over 500 test-shots hand-held at my usual magnification of 1:40 (distance being around 3.4m). The huge number of shots was necessary as the results were a bit unexpected. I tested shutter speeds from 1/80 of a second down to 1/5 sec. Comparing the shots with VC=ON with reference samples with VC=OFF I can report that the VR is good for 2 stops with the risk of shots at 1/10 sec to be clearly blurred at about 50% under my testing conditions. Under less favorable conditions I’d definitely avoid 1/10 sec. There is also the odd effect with my copy that results from 1/80 with VC=ON were a bit less sharp on average than the shot at 1/80 with VC=OFF. At lower speeds though switching VC on had always a positive effect on average sharpness. Overall this is a bit of a disappointment especially as the Tamron 90/2.8 VC macro lens had a more effective stabilization good for at least 3 stops.