Tamron's new 70-210mm f4 VC zoom is a good lens: It's sharp, has reliable AF, and respectable image stabilization. Plus it offers a very usable maximum magnification of 1:2.7 at a working distance of 0.67m. The front lens has fluorine coating to repel dirt and the lens seems well-hardened against the elements. Plus it's the cheapest stabilized full-frame 70-200+mm f4 zoom you can buy. But if you want sharper results or better stabilization, or indeed need an f2.8 focal ratio then you have to look elsewhere - and pay a substantially higher price for it. This makes the new Tamron a well rounded package deservedly earning a Recommended rating.

Check prices on the Tamron 70-210mm f4 VC at Amazon, B&H, or Adorama, or Wex. Alternatively get yourself a copy of my In Camera book or treat me to a coffee! Thanks!

The Tamron 70-210mm f4 Di VC USD is a 3x telephoto full-frame zoom available in mounts for Canon and Nikon DSLRs. Announced in February 2018, it’s a first from Tamron with a slightly longer reach up to 210mm and a constant aperture of f4 making it possible to reduce size and weight over the usual 70-200mm f2.8 zooms. It’s also lighter on the wallet as Tamron prices the new lens at 800 USD/EUR which is well below their own 70-200mm f2.8 VC G2 currently selling for about 1300 USD/EUR. 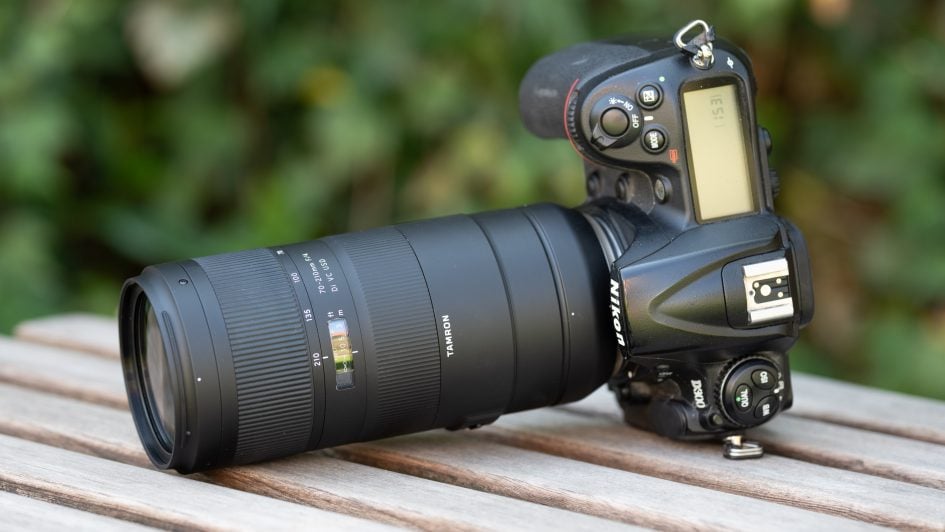 Optics: 20 elements in 14 groups, which is very similar to the Nikon and Canon. The f2.8 Tamron is a slightly more complex design with 23 elements in 17 groups. The new Tamron has three low dispersion elements and employs fluorine coating on the front lens to repel water, dust, and dirt. [+]

Teleconverter: Tamron offers two teleconverters which were specifically designed for use with their new lenses. The TC-X14 transforms the new lens into a 98-294mm f5.6 zoom. It retains the minimum focus distance of 0.95m and increases the maximum magnification to 1:2.2. The tele converter has 6 elements in three groups and adds another 200g. The TC-X20 produces a 140-420mm f8.0 lens which should still auto-focus with the central focus point on most Nikon or Canon DSLR and offers a maximum magnification of 1:1.6. The competition offers tele converters too. [0]

Image Stabilization: Yes, dubbed VC for Vibration Control. It can be switched off on the lens and you can customize VC operation via the Tap-in console to be more effective for stabilizing the view-finder and shooting video or for shooting stills. But there is no switch on the lens to toggle these settings. Tamron claims their VC yields 4 stops of stabilization. The competition also has image stabilization, dubbed “IS” with Canon and “VR” with Nikon. [+]

Auto Focus: USD (ultra sonic drive), so it also works on DSLRs which don’t have an AF-drive built in. Manual-focus override is by simply turning the focus ring. Same with the competition. But the new Tamron allows you to alter the response to manual focus override with the USB TAP-in console from very sensitive to low and you can alter focus fine-tuning at 3 distances and 4 focal lengths with the TAP-in console. The lens does not offer a focus limiter. [+] 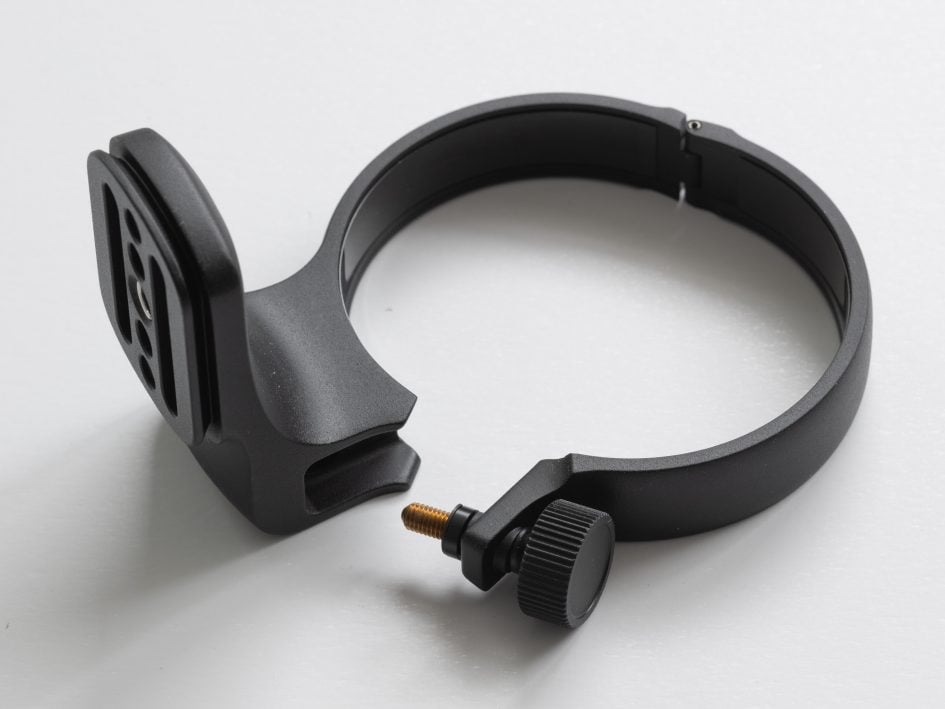 Sealing: yes. A rubber grommet at the lens-mount plus other “leak proof” seals throughout the lens barrel. [+]

The score in the “features-department” is 0[-]/6[0]/8[+]. This is pretty good: The new lens reasonably small and light, has the lowest price, reaches a good magnification at close distances, and seems hardened well against the elements.

Other alternatives include a variety of 70-200mm f2.8 zooms which are all bigger, heavier and more expensive than the new Tamron but offer an additional stop of light gathering power with their f2.8 focal ratio. A good example is Tamron’s own 70-200/2.8 zoom lens which currently sells for 1340 EUR and earned a Highly Recommended in my Tamron 70-200mm f2.8 VC G2 review. 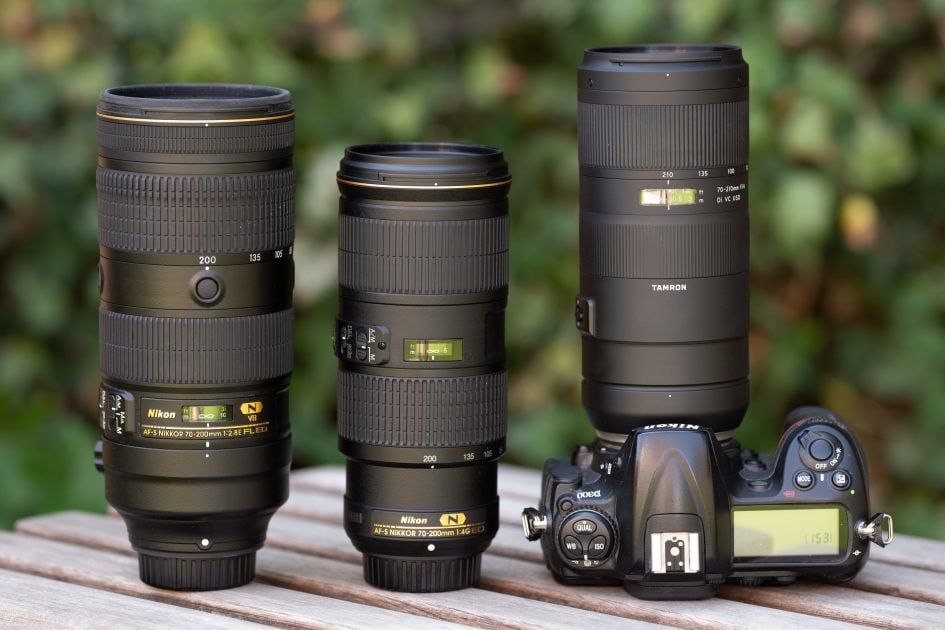 Focus accuracy and repeatability is critical to consistently produce sharp shots. Repeatability (the accuracy of focus on the same subject after repeated focus-acquisition) of this lens is good (measured 97.8% in Reikan FoCal) with only one mild outliers over a series of 40 shots. There is a slight performance variation whether the lens focuses from infinity or from a closer distance. In both respects the new Tamron is a little better than the Nikon 70-200/4.0G VR. Focus speed is good: At 210mm focal length the lens focuses without hunting in around 0.5 sec from infinity to 2.4m. But it’s not as fast as the 0.33 sec of both 70-200mm Nikons.

The focus ring has a very slight slack/play between its movement and the focus-action and a throw of 160 degrees. Its rubberized surface is 28mm wide. The zoom ring turns through 75 degrees and has a 28mm wide rubber surface. Both rings are of medium stiffness. They turn both in the same direction as Nikon users are used to and Tamron did also put the zoom ring at the front and the focus-ring closer to the camera which is the configuration I prefer. But this is the complete reverse of what Canon does e.g. with its EF 70-200/4.0 L IS USM.

AF-operation is barely audible from the outside and also very quiet if you record video with the built-in microphone. The VC-system is virtually silent both on the outside and when recording video. Very good!

As you pull focus, you’ll notice quite some focus breathing at 210mm focal length: the image becomes more magnified at closer focusing distances. When I adjusted the focus from infinity to 2.37m I measured a 13% increase in magnification  which is very visible and might displease videographers. Even at shorter focal lengths the effect is quite pronounced. In comparison the Nikon 70-200/4.0G VR increases magnification by 11% at 200mm focal length.

To test the effectiveness of the image stabilization I did a series of almost 500 test-shots hand-held with the new Tamron at 210mm focal length. I tested with VC in standard mode and in the mode optimized for shooting stills (mode 3) and shutter speeds were from 1/200 of a second down to 1/6 sec. Shots at 1/200 sec with VC=OFF are used as reference of how good my hand-holding was at the time of the test and Reikan FoCal did the chore of evaluating the sharpness of all shots. Here’re the details: With VC=ON the lens produced results down to 1/25 sec (3 stops) which were comparable to 1/200 sec with VC=OFF with mode 3 showing some benefit over standard mode at 1/25 sec. At 1/13 sec both modes had a 30% risk of clearly blurred images. This is a 3-4 stop advantage from stabilization in both modes with mode 3 preferably used for stills. 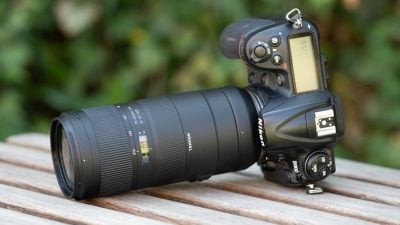 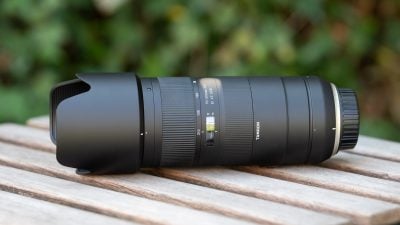