The Tamron 28-75mm f2.8 is a valuable addition to the full-frame E-Mount market, that's wisely pitched between Sony's entry-level FE 28-70mm f3.5-5.6 kit zoom and the high-end FE 24-70mm f2.8 G Master. The Tamron is stunningly sharp in the APS-C image-circle and delivers very usable close-up performance too. It's small and light and comes at a reasonable price that makes it a viable option for those who can only dream of f2.8 zooms and were otherwise heading to the budget kit lens. For the price, the sharpness unsurprisingly becomes softer in the full-frame corners and many will miss the wider coverage of zooms that start at 24mm; there's also some irritating flare and ghosting under certain circumstances. But all-in-all the Tamron 28-75mm f2.8 is an attractive option for E-mount owners who want a step-up in aperture from the entry-level Sony FE 28-70mm f3.5-5.6 kit zoom without the considerable cost of the FE 24-70mm f2.8 G Master - and while it may become soft in the corners, subjects towards the middle will be sharp with the potential for attractive blurring behind them. So overall I'm happy to award Tamron's first native E-mount lens a recommendation!

Check prices on the Tamron 28-75mm f2.8 at Amazon, B&H, Adorama, or Wex. Alternatively get yourself a copy of my In Camera book or treat me to a coffee! Thanks!

To find out whether the new Tamron 28-75mm f2.8 rightfully earns a recommendation I tested it on the 42MP Sony A7Rii body. Note: while Gordon has reviewed a number of e-mount lenses with his own tests, this is my first e-mount review, so I don’t have any personal results for lenses sharing the same mount yet. So for this first one, I thought it would be interesting to compare it against another first system lens, the Nikon Z 24-70mm f4S. This is obviously just out of interest and no-one is likely to change systems based on it, but equally it is interesting to compare the potentials and options for multiple systems. So if you’re interested in how Tamron’s new standard zoom lens performs, you’ve come to the right place! 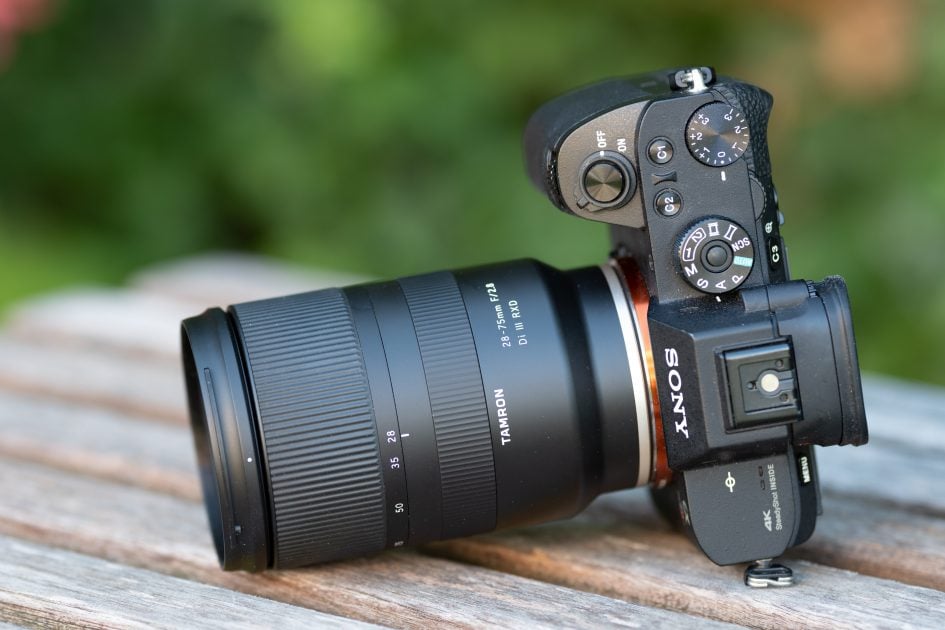 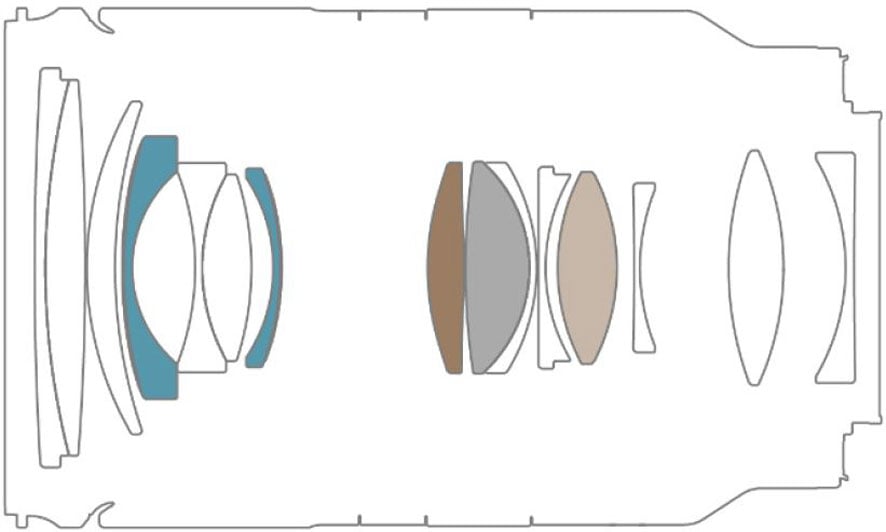 Filter-thread: 67mm which is much smaller and cheaper than the 82mm filters the Sony GM needs. The Z Nikkor uses 72mm filters. [+]

Auto focus: Yes. Manual-focus override is by simply turning the focus ring. The focus ring has a variable gearing that allows for very precise manual focus when turned slowly just like the Sony GM and the Z Nikkor. The Sony GM has an additional focus hold button. [+]

Comes without pouch/strap but the lens hood is included and reversible for transport. The Sony GM has a nice lens case and its lens hood locks in place to avoid accidentally falling off. The Z Nikkor has only a soft lens pouch. [0]

Aperture ring: No, just like the Sony GM. The Z Nikkor has a multi-function lens control ring which can be assigned to operate the aperture, exposure compensation or focus – separately for video and stills. [0]

Sealing: yes, a rubber grommet at the lens-mount. Both the Sony GM and the Z Nikkor have further special weather-sealing throughout the construction. [+]

The score in the “features-department” is 0[-]/3[0]/10[+]. So the lens has a very good feature set. Especially noteworthy is its relatively small size and weight considering its constant f2.8 focal ratio. But this is certainly made easier to achieve by giving up 4mm on the short end which reduces the angle of view from 84 degrees for 24mm focal length to 75 degrees for 28mm (see comparison of coverage below). 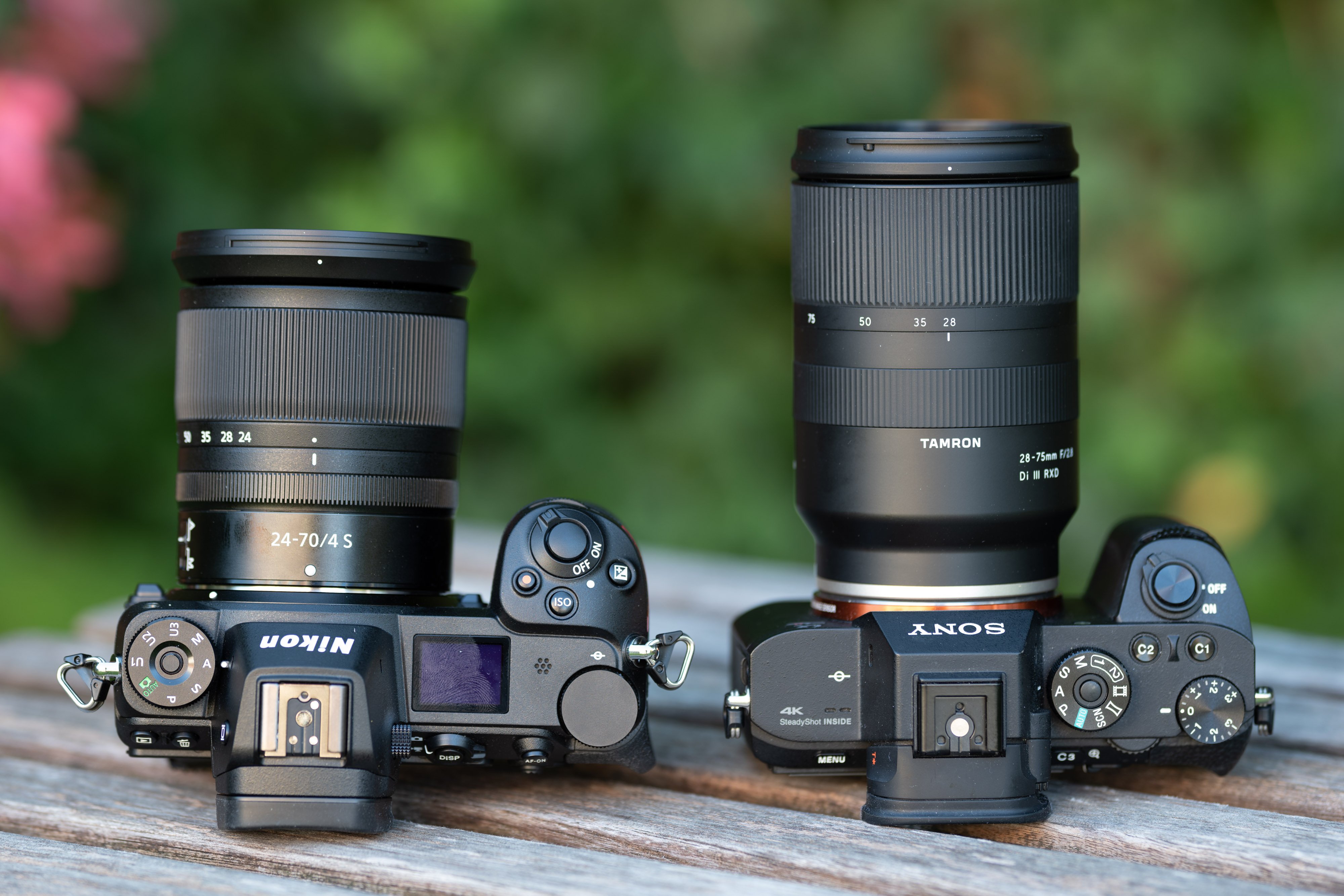 The market for full-frame 24-70mm zooms is pretty crowded if you include the A-mount options as they convert quite well. I’ve listed the E-mount options first, excluding the FE 28-70mm kit zoom:

A classic 24-70mm lens captures a visibly wider angle at the short end:

Focus accuracy and repeatability is critical to consistently produce sharp shots. Repeatability (the accuracy of focus on the same subject after repeated focus-acquisition) of this lens at 75mm focal length is good (measured 98.2% in Reikan FoCal) with no outliers over a series of 40 shots on a A7R II. There is a little focus variation with the lens hitting the (focus-) mark better when coming from infinity. At 75mm focal length the lens focuses in around 0.7 sec from infinity to 0.86m (1:10 magnification).

The zoom ring turns through 65 degrees the way Sony (as well as Nikon and Canon) users are used to and has a 29mm wide rubber surface with a good grip. It turns pretty stiff and can hardly be operated with one finger. There is no zoom lock but the operation is stiff enough to prevent zoom creep. The focus ring is 15mm wide and is located closer to the camera. It moves very smooth and can easily be operated with one finger. 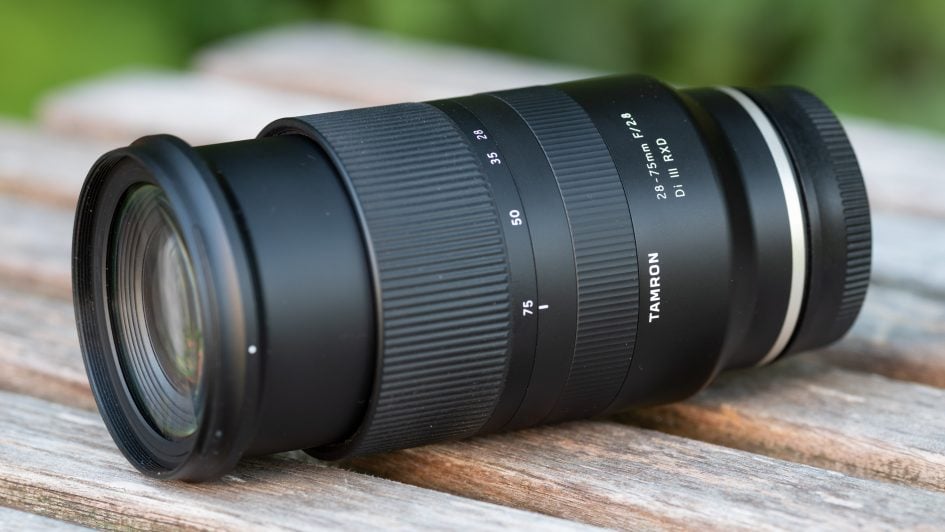 AF-operation of the new lens and image stabilization of the A7R II is inaudible from the outside and when you record video with the built-in microphone. As you pull focus, you’ll notice some focus breathing: the image becomes a little more magnified at closer focusing distances. When I adjusted the focus from infinity to 0.86m (1:10 magnification) on the new Tamron at 75mm focal length, I measured a 3% increase in magnification. The same test at 28mm focal length did only produce a 0,4% increase. Very good!  So the new Tamron produces very little focus breathing when recording video.

To test the effectiveness of image stabilization with the Tamron 28-75mm f2.8 on a Sony A7R II body, I did a series of 140 test-shots hand-held at 75mm focal length. I tested with shutter speeds from 1/80 of a second down to 0.4 sec. Shots at 1/80 sec with Steady Shot=OFF are used as reference of how good my hand-holding was at the time of the test and Reikan FoCal did the chore of evaluating the sharpness of all shots. Here’re the details: With Steady Shot=ON (in camera) the combo produced results down to 1/20 sec (2 stops) which were better or at least comparable to 1/80 sec with Steady Shot=OFF. At 1/10 sec the images were still very usable but clearly less sharp than before. At 1/5 sec there were 50% clearly blurred images. This is a 3 stop advantage from stabilization. On a newer A7R III body the results could be better.

I also tested the new Nikon Z 24-70mm f4S on the Z7 in a test set-up that was identical to the one above. The results: With VR=ON (in camera) the combo produced results down to 1/5 sec (4 stops) which were better or at least comparable to 1/80 sec with VR=OFF. At 0.4 sec there were 30% clearly blurred images. This is a 4-5 stop advantage from stabilization. 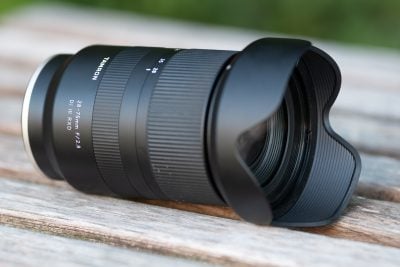 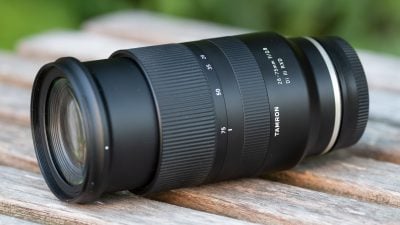 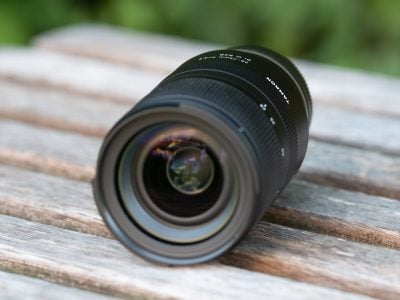