Take one look at the Alpha A100 and it’s clear Sony hasn’t only taken Konica Minolta’s lens mount and internal highlights. The A100’s body is quite obviously also based on Konica Minolta’s earlier Dynax / Maxxum 5D, sharing essentially the same design and control layout, give or take a couple of buttons. Just take a look back at our Konica Minolta 5D review to see what we mean.

And yet, the A100 manages to somehow look much smarter and more desirable. Much of this is down to subtle differences in materials and shaping. The dials for example, while in the same positions and offering essentially the same functions, are quite identifiably Sony-styled. The upper right surface has also switched from two levels to one, with a reshaped area around the shutter release. The joins between the lens mount and main body are also less angular.

Most obviously, the newly curved head section with its popup flash is now branded Sony, which fits the space much better than the 14 characters demanded by Konica Minolta ever could. It really is amazing how these small differences have transformed the slightly old-fashioned-looking 5D into the far better-looking Alpha DSLR-A100.

Interestingly Sony has also chosen to bundle the basic Alpha A100 kit with the same 18-70mm DT f3.5~5.6 lens as came with the Konica Minolta 5D, although as mentioned in the introduction, the zoom ring has been redesigned and the lens of course now sports Sony branding. This coupled with the subtle differences described above all contribute to it looking like a brand new system.


Measuring 133x95x71mm, the Alpha A100 is only a few millimetres wider and deeper than Canon’s compact EOS-350D / Rebel XT, but this has allowed for greater fingertip space between the grip and lens mount, providing a more comfortable hold.

Fitted with battery and kit lens, the Alpha A100 is noticeably heavier than the 350D / Rebel XT, but not in a bad way: the weight lends it a greater air of confidence, and it should also be remembered the Sony kit has a longer 18-70mm focal length than the 18-55mm Canon kit. The Sony DSLR-A100 and Canon EOS-350D / Rebel XT are pictured here together viewed from above, with the Sony on the left side.

Overall build quality for the Alpha A100 is certainly very good, although it remains a budget digital SLR and therefore unsurprisingly lower than the build standard of, say, the Canon EOS 30D or Nikon D200.

Like the Konica Minolta 5D before it, most of the Alpha A100’s main controls are accessed using a pair of dials positioned to either side of the head on the top surface.

To the right is the traditional command dial, offering Auto, Program, Manual, Aperture and Shutter Priority modes, along with six scene presets. Shutter speeds range from 1/4000 to 30 seconds plus Bulb, while the fastest flash sync speed is a modest 1/160, or 1/120 with the Super SteadyShot anti-shake activated. To the right of the dial is a button which switches between the six drive modes, including continuous shooting which we’ll discuss in the Features section. 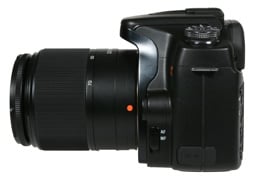 To the left is a Function dial which allows you to immediately access metering, flash, focus, ISO sensitivity, white balance and contrast, colour and sharpness settings, along with Sony’s three new Dynamic Range options.

This dial delivers far more options than the earlier 5D, and it’s great to be able to access them directly with a dial rather than being forced to delve into menus. It does however seem a little odd not to also include the drive mode control here rather than using the button on the right.

In terms of other controls, the rear surface is virtually identical to the earlier 5D, except for Sony’s branding and the absence of a Function button in the upper right. The power switch is in the top left, while in the opposite corner is the switch which turns the Super SteadyShot anti-shake facility on or off – we’ll test its effectiveness on the next page. Like the 5D, all shooting information is shown on the main colour monitor, again featured on the next page.

The Alpha A100 includes a manually pop-upable flash with fill-in, rear sync and wireless options, along with compensation of +/-2EV. The popup flash is built around what appears like a standard Minolta accessory shoe; we weren’t able to test the A100 with any Minolta accessories, but Sony’s announced several (often rebranded) models including the HVL-F36AM and HVL-F56AM flash guns, HVL-MT24AM twin macro and HVL-RLAM ring lights, along with a triple flash adapter, off-camera shoe and off-camera, multi flash and flash extension cables.

External connectivity consists of a DC input on the left side, remote terminal on the rear, and a combined USB 2 port / video output behind the memory card door on the right; we’d prefer to find this last port behind a separate flap though, as it looks a little messy having the CF door wide open when the data or video cable’s connected.

Based on the 5D, the A100 unsurprisingly uses Compact Flash memory cards, although equally unsurprisingly, Sony includes a CF adapter which allows you to alternatively use the company’s own Memory Stick Duo cards (Pro or normal).

The A100’s powered by a Sony NP-FM55H InfoLithium battery pack and comes with a mains recharger. The battery has an 11.5Wh rating which Sony claims is good for 750 shots under CIPA conditions. It’s a new battery which Sony says is designed specifically for digital SLR power characteristics and is not interchangeable with Sony HandyCam batteries.

Sadly, despite being an InfoLithium design, the A100 does not exploit this circuit to display the exact time remaining as on other Sony cameras; we hope to see this feature implemented on future Alpha digital SLRs. As it stands, the A100 indicates battery life with a four-segment icon on the main monitor. During our initial test period, we fired off just under 200 shots over two days (most with Super SteadyShot on but very few with the flash) before the battery-low icon appeared.