The Sony Cyber-shot HX400V is the updated version of 2013’s HX300. Externally, it’s a very similar model and sports the same 50x optical zoom with an equivalent 24-1200mm range and a bright f2.8-6.3 aperture. It also retains the older model’s 201k dot EVF and 921k dot 3 inch LCD screen – though now there’s a sensor to automatically switch from one to the other.

The other major improvement is built-in Wifi and GPS, with NFC for connecting to a suitably equipped smartphone. Beyond that the HX400V now has Sony’s accesory port for mounting an external flash, an additional memory position on the mode dial, a new Function button, focus peaking, and a wider range of Picture effect filters. It all adds up to a significant advance on the earlier model that keeps the HX400V in contention with the competition for new entrants to the super-zoom market, but is unlikely to motivate upgraders to action. 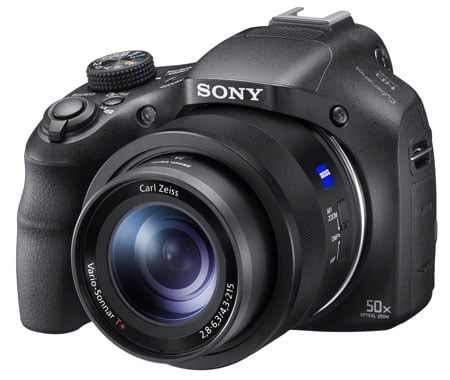 Externally, the Nikon COOLPIX P600 and Sony HX400V bear a superficial resemblance – they’re both bridge super-zooms after all – but the COOLPIX P600 is smaller and lighter. You could easily mistake the HX400V for a DSLR, but not the P600. And though it’s smaller, it packs a bigger punch – in the form of its 60x optical zoom. With an equivalent range of 24-1440mm it starts at the same wide-angle as the HX400V but outreaches it at the telephoto end of the range – 1440mm compared with 1200mm. Against that, the HX400V has a slightly brighter maximum aperture – f2.8 compared with f3.3, but it’s a small advantage and it really only makes a difference at the wide angle lens settings. At 1200mm the P600 is actually brighter – f6 compared with f6.3 on the HX400V. One other differentiating factor is the zoom itself. Both mdels have a zoom rocker on the shutter release, but the P600 also has one on the side of the lens barrel, where the HX400V has a zoom ring on the barrel that can be re-assigned to focussing.

Beyond the lens, the HX400V’s sensor produces higher resolution 20.4 Megapixel images than those from the 16.1 Megapixel COOLPIX P600. But despite packing more photosites onto the same physical sized sensor, the HX400V actually did better in my High ISO noise tests. The HX400V can also take advantage of various composite modes that provide it with Multi Frame Noise Reduction, HDR and other features. Interestingly though, the P600 came out on top in my outdoor quality tests – albeit by a narrow margin.

Both models are equipped with a 3 inch LCD screen with the same resolution, but the Sony HX400V’s flips up or down, whereas the COOLPIX P600’s is side-hinged and can face in any direction including forwards for self-shooting and in portrait orientation. Like the screen, the electronic viewfinders are pretty evenly matched, but the HX400V has an eye sensor to automatically switch from one to the other.

Both models offer the full range of PASM exposure modes in addition to scene detect auto and both offer a range of effects modes, but the HX400V has more of them and they are more versatile. What’s more, unlike the P600’s effects, the HX400V’s Picture effects can be applied from the menu in most shooting modes. Both models offer a pretty good panorama mode.

With 1080p/50/60 HD video, a dedicated movie position on the mode dial and the ability to use PASM exposure modes for movie shooting, the Sony HX400V is a better choice for shooting video than the COOLPIX P600. In its favour, the COOLPIX P600 does offer a wide range of movie modes including 1080p30, 1080p24, 1080i50, and 1080i60. It also offers the edit-friendly iFrame codec in addition to two high speed modes and can take low resoution stills during movie recording.

Both models have built-in Wifi, but the HX400V also offers GPS and NFC tap-to-connect as well as the ability to download and install apps for added features and functions. The Sony also supports more accessories, including an optional microphone, cabled release and various external flash units.

On price, the HX400V is a little more expensive, though in regions where the HX400, without the GPS, is sold, you can find the two pretty closely matched. As always, it comes down to which model you feel is the best fit personally but, broadly speaking, the HX400V is a more fully featured model with better customisation options and more versatile movie shooting. The COOLPIX P600 has a longer zoom, is more compact and lightweight and has a more versatile flip-out screen.

The Sony HX400V is a first-rate super-zoom that improves on its predecessor in numerous ways. The headline improvements – a new sensor and powerful processor are welcome, but it’s the smaller incremental changes that impressed me more. The return of the eye sensor, an additional memory recall position on the mode dial, the new Function button and the easily missed re-assignment of the buttons on the control dial all make for a better handling experience that will be appreciated by anyone who likes to take real advantage of the opportunities for control that the PASM modes provide.

The addition of Wifi with NFC and the built-in GPS bring it right up to date and the ability to download and install new features via apps provide the chance to extend its capabilities for little more than the price of a coffee. Like most Sony cameras, the HX400V is also well-catered for accessories with the chance to connect optional flashguns, a cabled release or external microphone.

It’s a disappointment to see the same old viewfinder retained, but that’s a criticism that applies to most of Sony’s competitors in this market. And the HX400V is a camera that really cries out for a touch-screen, it would make Wifi connections for non-Android smartphones easier and improve the experience of downloading and installing apps, as well as improve overall handling. Those are more of a wish list than fundamental criticisms though, and not enough to deprive the HX400V of a well-deserved Highly Recommended award.