To compare real-life performance I shot this scene with the Sony Cyber-shot HX400V and Nikon COOLPIX P600 within a few moments of each other using their best quality JPEG settings.Both cameras were set to their maximum wide angle 24mm equivalent focal length.

I’d previously determined the best results on the Sony HX400V were produced at the maximum f2.8 aperture, so for this test I set the HX400V to f2.8 in Aperture priority mode. The COOLPIX P600 was set to its maximum aperture of f3.3. For this test the cameras were mounted on a tripod. Image stabilisation can’t be disabled on the HX400V, so was left on the default intelligent Active setting, but was disabled on the COOLPIX P600.

Though it doesn’t get off to a great start, generally the HX400V gives a good account of itself in this first set of crops taken at the maximum wide angle 24mm equivalent focal length. The first crop from close to the left edge of the frame is showing a little bit of distortion, but if there was any colour fringing it’s been dealt with in the camera. The detail is a little fuzzy and clumpy looking here too.

The second crop, from closer to the middle of the frame, shows clearer fine detail, sharper edges and none of the distortion of the first one. The very finest detail, the roof tiles for example, elude the HX400V’s compact sensor, but the window frame verticals are nice and clean and you can make out some detail in the distant buildings. There’s a similar level of detail in the third crop and the fourth crop from close to the right edge of the frame, like the first, looks a little clumpy.

Overall, this is a good performance from the HX400V, though not the best in terms of definition that I’ve seen from a compact super-zoom. So how does it compare with the COOLPIX P600? The first thing to note is that the 16.1 Megapixel sensor in the COOLPIX P600 produces a larger crop area with smaller detail than the 20.4 Megapixel sensor in the Sony HX400V. The first crop from the COOLPIX P600 looks cleaner and more detailed to me. And so does the second one. The COOLPIX P600 has overexposed slightly, so there’s less detail in the highlights, but the edges look crisper to me. Conversely there seems to be less detail in the third crop, but the P600 just edges it in the final one. In practical terms this is a small difference which is hard to spot even at 100 percent viewing size, but I think the lower resolution COOLPIX P600 just about wins out.

Scroll down the page to see how these models compare when zoomed in to 600mm and 1200mm equivalent focal lengths. Alternatively, to see how they compare at higher sensitivities check out my Sony HX400V noise results. 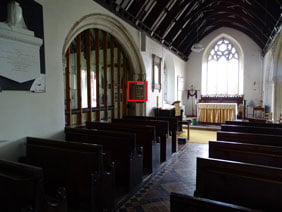 To compare noise levels under real-life conditions, I shot this scene with the Sony Cyber-shot HX400V and the Nikon COOLPIX P600 within a few moments of each other using their best quality JPEG settings at each of their ISO sensitivity settings.Both cameras were set to their maximum wide angle 24mm equivalent focal length.

I’d previously determined the best results on both cameras were produced with the aperture at its widest setting, so for this test I set the HX400V to f2.8 in Aperture priority mode. The COOLPIX P600 was set to its maximum aperture of f3.3. For this test the cameras were mounted on a tripod. Image stabilisation can’t be disabled on the HX400V, so was left on the default intelligent Active setting, but was disabled on the COOLPIX P600.

The 80 ISO crop from the HX400V looks good, there’s a little bit of noise texture in the label at the top of the hymn board, but you have to be looking carefully at these 100 percent crops to spot it. The noise increases a tiny bit in the 100 ISO crop, so for outdoor shooting in good light it pays to stick to the base 80 ISO setting if you can. At 200 ISO there’s quite a hike in the noise and the edges, which were previously nice and clean, are just a bit softer. You can also see noise texture in the numbers. At 400 ISO the noise takes a another quite hefty notch up; now there’s an overall clumpiness obscuring finer detail and he edges are looking a bit grungy.

The 800 ISO crop is grainier still, but there’s plenty of detail and at anything other than 100 percent 800 ISO it looks very presentable. The same is true at 1600 ISO, though now even medium sized detail is beginning to suffer and the text on that label is only just legible. Even at 3200 ISO ISO, though, the noise is regular and organic looking and there’s none of the ugly clumping and smearing that often accompanies aggressive noise reduction at high ISO sensitivities. Overall I’d say this is a good result for the HX400V. Though the noise increases very noticeably in the lower part of the sensitvity range, it’s managed well, delivering useable results right the way up to the maximum 3200 ISO setting.

Compared with the HX400V, the COOLPIX P600 gets off to a good start. Just a reminder that the 16.1 Megapixel sensor in the COOLPIX P600 produces crops with a larger area and smaller detail than those from the 20.4 Megapixel HX400V. At its base 100 ISO sensitivity setting the COOLPIX P600 crop compares very favouraby with the 100 ISO crop from the HX400V, but I’d say it’s marginally noisier with visible texture in the white label as well as the numbers on the board.

As with the Sony HX400V, as you progress up the sensitivity scale the noise increases very visibly with each 1EV step, but the margin is bigger on the P600 with the result that by 800 ISO there’s a clear gap opening up. Though the P600 has a top setting of 6400 ISO compared with 3200 ISO on the HX400V, beyond the base 100 ISO setting, at each step up the sensitivity scale its results are noisier than the equivalent on the HX400V.

Apart from its superior high ISO noise performance the HX400V has a couple of other tricks up it’s sleeve. Firstly, at the wide angle setting its maximum aperure is a little wider than the P600, so you can shoot with a lower ISO using the same shutter speed in similar lighting conditions. In my test, for example, I was able to shoot at 80 ISO on the HX400V compared with 100 ISO on the P600 using the same shutter speed (even then, the P600 crops are slightly darker).

Secondly the HX400V has a raft of composite modes that produce lower noise results at high ISO settings. The most useful of these is Multi Frame Noise Reduction which allows you to set the ISO manually from 100 to 12800. For comparison purposes I’ve shown a crop at the end of the table using MFNR at 3200 ISO as well as the HX400V’s Hand held Twilight mode which sets the ISO automatically.

Now head over to my Sony HX400V sample images to see some more real-life shots in a variety of conditions, or head straight for my verdict.