The FE 70-200mm f2.8 G Master is Sony’s professional large aperture telephoto zoom lens for their Alpha mirrorless cameras. As such it is one of the most important lenses in their line-up and highly desirable to portrait and wedding photographers, as well as anyone shooting close-range sports or wildlife. Sony equipped its lens well: optical image stabilization, tripod collar, focus limiter, focus-hold buttons and compatibility with Sony’s 1.4x and 2.0x teleconverters. Plus there’s fluorine coating on the front lens and thorough weather-sealing. The lens focuses closer than one meter and can achieve a very useful maximum magnification of 1:3.6. Its optical performance is still the best you can get for your Sony Alpha mirrorless camera in this focal range. It may not be the smallest telephoto zoom with a constant f2.8 focal ratio and it's pretty heavy on your neck and wallet too, but other than that I can highly recommend it!

Check prices on the Sony FE 70-200mm f2.8 at Amazon, B&H, Adorama, or Wex. Alternatively get yourself a copy of my In Camera book or treat me to a coffee! Thanks!

The FE 70-200mm f2.8 GM, also known as the SEL70200GM, delivers a popular range that’s ideal for weddings, events, portraits and close-range sports or wildlife, while the bright and constant f2.8 focal ratio allows you to achieve shallow depth-of-field effects to isolate the subject. The lens also became Sony’s first to feature a floating focusing system that employs SSM and dual linear motors working together to maintain optical quality and AF performance from infinity down to the closest focusing distance of 0.96m. The lens also features optical stabilisation and is weather-sealed against dust and moisture.

The FE 70-200mm f2.8 GM was the second telephoto zoom designed for Sony’s full-frame mirrorless cameras, following the original f4G version. It’s heavier and more expensive, but enjoys that extra stop of aperture, along with the higher optical performance of a G Master lens. If you’d like more reach, Sony also designed 1.4x and 2x tele-converters to work with it, or you could opt for the FE 100-400mm GM or FE 200-600mm zooms. In this review I’ll take an in-depth look at the FE 70-200mm f2.8 GM, comparing it to more recent rivals and seeing if it’s still worth spending the premium price.

Auto focus: Yes with built-in AF drive. Manual-focus override is by simply turning the dedicated focus ring. The focus ring of the Sony f2.8 GM has linear gearing with a turn of 100 degrees which makes smooth focus pulling for videographers easy. The focus ring of the Tamron III has a variable gearing which allows for very precise manual focus when turned slowly but cannot be switched to linear gearing. [+]

Lens profile: The lens comes with a lens profile for vignette-, CA- and distortion-compensation which can be controlled from the camera. Adobe’s RAW converter (as of version 12.2.1) does not recognize the profile completely: vignette is compensated as it was set in camera (but you cannot switch between off and auto in post-processing) while CA-compensation is always ON, distortion compensation always OFF. To get rid of the distortions in RAW files you need to activate the Adobe supplied lens profile. Same for the Tamron III. [+]

Covers full frame or smaller. Same with the Tamron III and the Sony f4 G. [+]

The Sony f2.8 GM has a nicely padded lens case plus strap and a tripod-collar with removable foot. Its lens hood has a slider through which a polarizing filter can be orientated. The Tamron III comes without a pouch or tripod-collar but the lens hood is included and reversible for transport. The Sony f4 G comes with a pouch and a removable tripod-collar. [+]

Aperture ring and other control elements: The Sony f2.8 GM has no aperture ring but offers a focus hold button, a focus limiter switch (full/3m) plus switches to control image stabilization and AF/MF. Same for the Sony f4 G. The Tamron III has neither an aperture ring nor the usual AF/MF switch but offers a zoom-lock to prevent the zoom from extending when in the 70mm position. [+]

Sealing: All three lenses compared here have a rubber grommet at the lens-mount plus further special weather-sealing throughout the construction. [+]

Currently there’s only one other f2.8 telephoto zoom available for Sony’s E-mount. Other alternatives all have a slower focal ratio or have to be used via adapter adding to the size and weight of the combo.

The alternatives all reach 200mm focal length except for the Tamron. See the difference in coverage below. Here is the angle of view that the new Sony FE 70-200mm f2.8 GM OSS covers with its 2.9x zoom:

Compare this to the coverage of Tamron’s 2.6x zoom:

Focus accuracy and repeatability is critical to consistently produce sharp shots. Repeatability (the accuracy of focus on the same subject after repeated focus-acquisition) of this lens at 200mm focal length is very good (measured 99.0% in Reikan FoCal) with no outliers over a series of 40 shots. There is no focus variation whether the lens focuses from a closer distance or from infinity and I did not detect any hunting. At 200mm focal length the lens focuses in around 0.7 sec from infinity to 2.14m (1:10 magnification), which is not overly fast but still better than the 0.8 sec of the Tamron 70-180mm f2.8 Di III.

The zoom ring turns through 70 degrees and has a 30mm wide rubber surface with a good grip. It turns rather stiffly and can hardly be operated with one finger. The focus ring is 39mm wide, located at the front of the lens, and moves smoothly. I personally prefer the zoom ring at the front where I normally hold such a long and heavy lens. This also minimizes the risk of inadvertently touching the focus ring and triggering focus magnifier.

As you pull focus, you’ll notice quite some focus breathing: the image becomes clearly more magnified at closer focusing distances. When I adjusted the focus from infinity to 2.14m at 200mm focal length, I measured a 11% increase in magnification. The same test at 70mm focal length still produced a 4% increase. This is much worse than from the Tamron 70-180mm f2.8 Di III with an increase of 4%/0.4%. Videographers are probably not happy.

I also tested whether Sony’s zoom lens allows you to change the focal length without altering its focus. This characteristic is called parfocal. I manually focused the lens at 200mm and then slowly zoomed back to 70mm checking focus on the way. The FE 70-200mm f2.8 GM OSS did keep its focus perfectly. Just don’t forget to focus the lens at the long end, not the wide end.

To test the effectiveness of the image stabilization with the Sony FE 70-200mm f2.8 GM OSS on an A7R II body, I did a series of 140 test-shots hand-held at 200mm focal length. I tested with shutter speeds from 1/200 of a second down to 1/6 sec. I used the shots at 1/200 sec with SteadyShot=off as reference of how good my hand-holding was at the time of the test and Reikan FoCal did the chore of evaluating the sharpness of all shots.

Here’s the results: With SteadyShot=on the combo produced results down to 1/50 sec (2 stops) which were at least as sharp as at 1/200 sec with SteadyShot=off. At 1/25 sec (3 stops) I had 3 out of 20 shots which were clearly blurred but 80% of the shots were very usable. At 1/12 sec (4 stops) results became quite erratic with 40% clearly blurred images and at 1/6 sec (5 stops) only 30% of the shots were usable – but only for smaller output sizes. This is slightly better than the 3 stop advantage which the Tamron 70-180mm f2.8 Di III enjoys (at 180mm) solely from the image stabilization provided by the Sony Alpha mirrorless cameras. 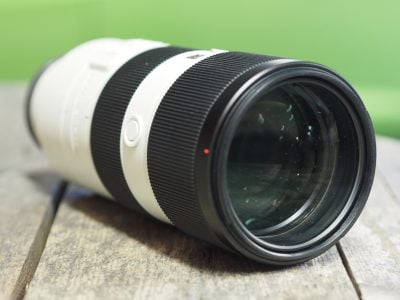 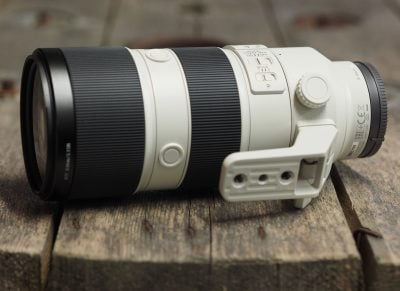