The Sony FE 50mm f1.8 is an affordable standard prime lens for Alpha mirrorless cameras. It delivers standard coverage on full-frame bodies making it an ideal walk-around lens, and becomes a short telephoto on APSC bodies, equivalent to 75mm, making it perfect for portraits. Meanwhile the bright f1.8 focal ratio lets you shoot more easily in low light while also delivering shallow depth-of-field effects. Sony's lens catalogue isn't short of 50mm options with many higher-end alternatives available with better quality (especially regarding corner sharpness and rendering) and quieter focusing. But none come anywhere near the low price of the FE 50mm f1.8, making it a no-brainer for Alpha owners starting out in prime lenses. It's also possible to assemble an affordable threesome by adding the FE 28mm f2 and FE 85mm f1.8. All come recommended if you can't stretch to the higher-end options.

Check prices on the Sony FE 50mm f1.8 at Amazon, B&H, Adorama, or Wex. Alternatively get yourself a copy of my In Camera book or treat me to a coffee! Thanks!

The Sony FE 50mm f1.8 is an affordable standard prime lens for Sony’s mirrorless cameras and corrected for use on full-frame models. Announced in March 2016 it delivers standard coverage on full-frame bodies making it an ideal walk-around option, and becomes a short telephoto on cropped-frame APSC bodies, equivalent to 75mm, making it perfect for portraits. Meanwhile the bright f1.8 focal ratio lets you shoot more easily in low light while also delivering shallow depth-of-field effects.

Sony’s lens catalogue isn’t short of 50mm (or thereabouts) options, but the FE 50mm f1.8 is by far the most affordable and as such is a no-brainer for many owners. Indeed it’s possible to assemble a fairly low-cost threesome of bright primes with the FE 50mm f1.8 and its affordable siblings, the FE 28mm f2 and FE 85mm f1.8. If you’re after something higher-end, there’s the original FE 55mm f1.8 ZA at round four times the price, or the Sony Planar T* FE 50mm f1.4 ZA that’s even more still. If you want autofocus, none can match the price of the FE 50mm f1.8 which, like low-cost 50mm lenses on other systems, represents a great first prime for anyone exploring low-light or shallow depth-of-field photography on a budget. 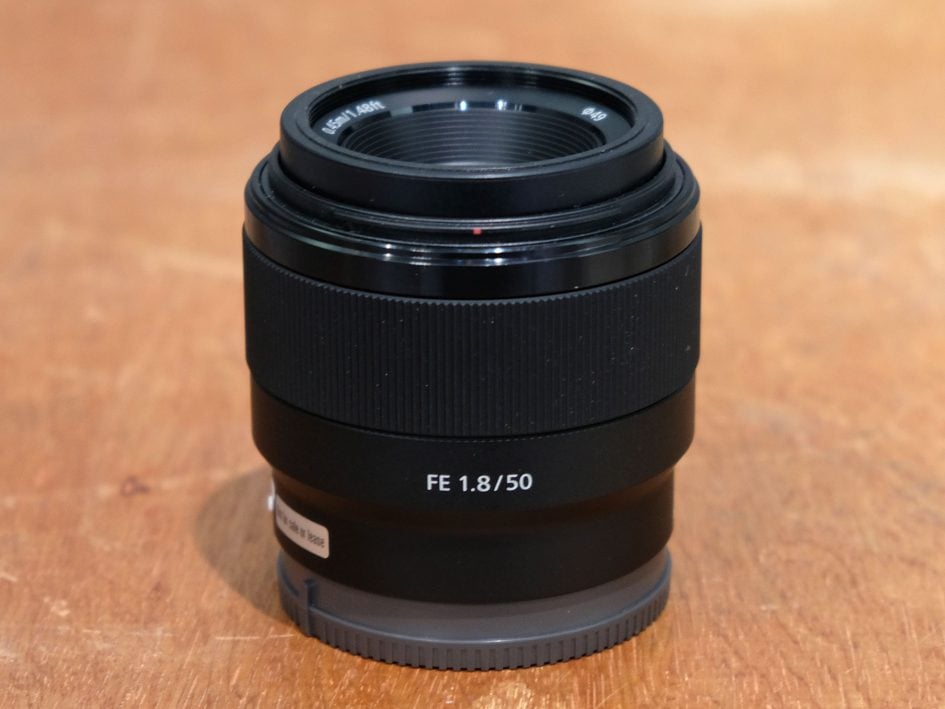 For this review I tested all three Sony standard prime lenses mentioned above on the 42MP Sony A7R II camera body. I also included the Sigma 50mm f1.4 Art as an interesting third party alternative. So if you’re interested in which standard prime lens to choose for your Sony mirrorless system, you’ve come to the right place! 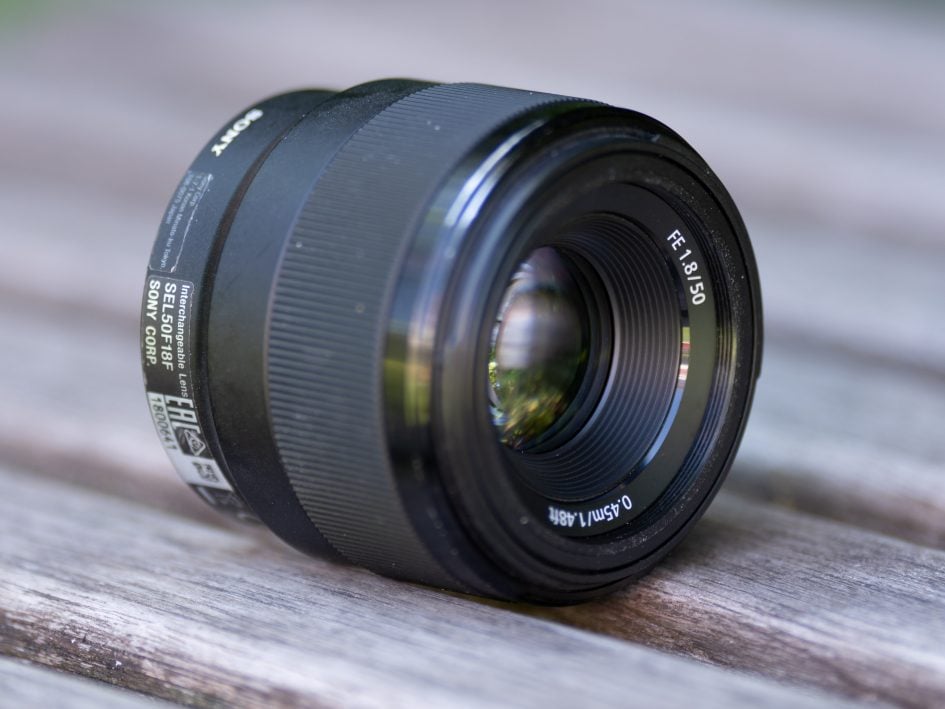 Check prices on the Sony FE 50mm f1.8 at Amazon, B&H, Adorama, or Wex. Alternatively get yourself a copy of my In Camera book or treat me to a coffee! Thanks! 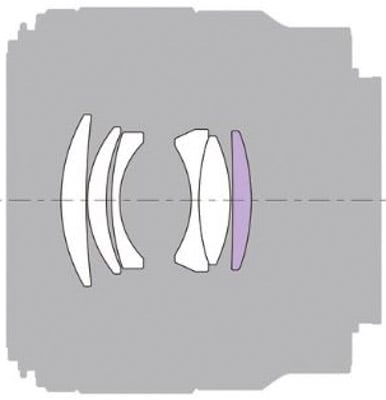 Auto focus: Built-in AF drive. Manual-focus override is by simply turning the focus ring. The focus ring has a non-linear gearing that allows for precise manual focus but makes smooth focus pulling for videographers almost impossible. Only the Sigma Art in this group has linear gearing. The Sony lenses and the Samyang have no distance or dof markings. Focus on the Sigma Art works differently as it has a direct linear mechanical coupling between the focus ring and the focus action. It also offers the distance and dof markings that normally come with lenses designed for DSLRs. [+]

The Sony FE 50mm f1.8 comes without a pouch but the lens hood is included and is reversible for transport. The FE 55mm f1.8 ZA comes with a soft pouch, the Sigma Art comes with a nice padded pouch but no strap. [-]

Aperture ring: No, just like the other lenses in this comparison. [0]

Sealing: The Sony FE 50mm f1.8 is not especially sealed, just like the Samyang and Sigma Art. The Sony 55mm f1.8 ZA has special weather-sealing throughout the construction but lacks a rubber sealing at the lens-mount. [0]

The score in the “features-department” is 1[-]/5[0]/7[+], the most prominent features of the lens being that it’s very small and light, and comes at a bargain price. 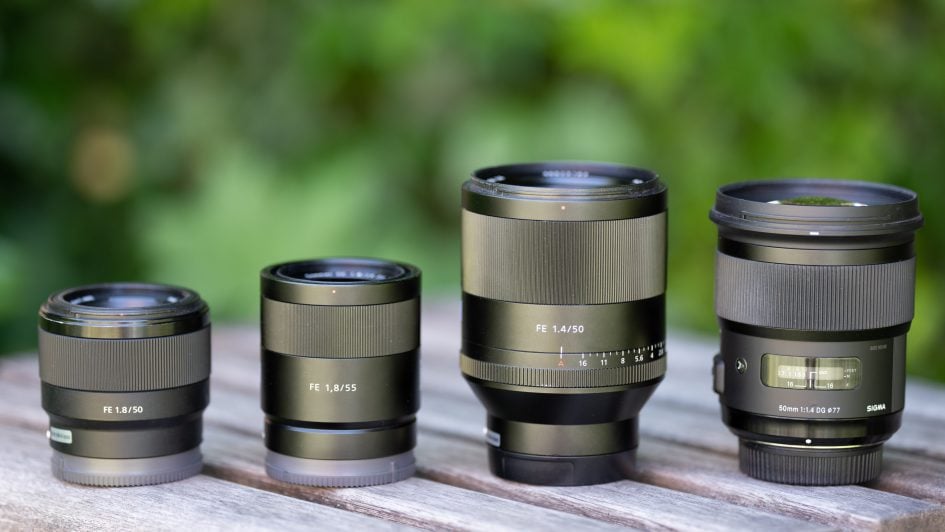 If you want a standard lens (45 to 58mm focal length) with a focal ratio of at least f2.0 and autofocus for Sony E-mount full-frame cameras there are quite a few alternatives:

Other alternatives include manual focus lenses or lenses with  even shorter focal length. To get the angle-of-view of a 55mm lens from a 40mm shot it needs a 38% crop which means almost halving resolution:

How big is the difference between 50mm and 55mm focal length? Here is the angle of view that the Sony FE 50mm f1.8 covers on a full-frame body compared to the FE 55mm f1.8 ZA:

Focus accuracy and repeatability is critical to consistently produce sharp shots especially with large aperture lenses. Repeatability (the accuracy of focus on the same subject after repeated focus-acquisition) of this lens is very good (measured 97,3% in Reikan FoCal) with no outliers over a series of 40 shots. There is only a very slight focus variation whether the lens focuses from a closer distance or from infinity.

The lens focuses in around 0.7 sec on a Sony A7R II from infinity to 0.62m (1:10 magnification), which is relatively fast and comparable to the Sony FE 55mm f1.8 ZA and the Sigma Art (on a Nikon Z7 with FTZ adapter). The focus ring of the FE 50mm f1.8 is 20mm wide. Both Sony lenses and the Samyang offer very smooth focus by wire operation which can easily be operated with one finger. Only the Sigma Art has a much stiffer mechanical coupling between the focus ring and the focus action.

AF-operation of the Sony lenses in this comparison is inaudible from the outside and if you record video with the built-in microphone only the FE 50/1.8 registers a tiny bit of noise. The Sigma Art produces an audible focus noise. As you pull focus, you’ll notice quite some focus breathing: the image of the Sony FE 55mm f1.8 ZA becomes 11% more magnified when I adjusted the focus from infinity to 0.62m. This can be quite distracting when shooting videos and is worse than from the FE 55mm f1.8 ZA and the Sigma Art which are around 7%. 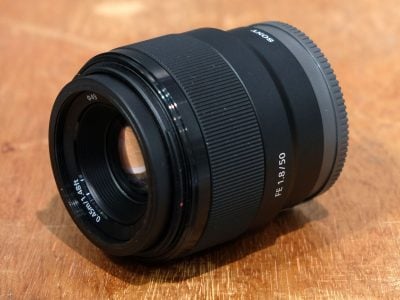 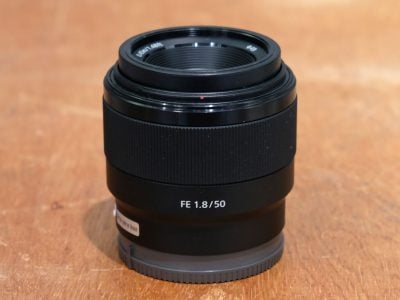