The Sony FE 50mm f1.4 ZA is a very respectable large aperture standard prime lens for Sony's mirrorless bodies. It’s very sharp in the center and produces one of the best full-frame corners I've seen. Plus its resistance against flare and glare in adverse contra-light situations is commendable. Its Bokeh is good albeit not best in class and it can be a little slow to focus. But it is sealed thoroughly and is smaller and lighter than many of its f1.4 rivals. That said, if small and light are what you want, do consider the Sony FE 55mm f1.8 ZA which loses two thirds of a stop of aperture and some of the bokeh quality to meet a much more compact size and lower price. But if you desire the more attractive bokeh and faster focal ratio, the Sony FE 50mm f1.4 ZA is a well-rounded package that justifies the price and deserves a Highly Recommended.

Check prices on the Sony FE 50mm f1.4 ZA at Amazon, B&H, Adorama or WEX. Alternatively get yourself a copy of my In Camera book or treat me to a coffee! Thanks!

The Sony Zeiss Planar T* FE 50mm F1.4 ZA is a prime lens for Sony’s mirrorless cameras, and corrected for use on full-frame bodies. Announced  in July 2017, its optical design is from Zeiss and it delivers standard 50mm coverage for a normal perspective, and a bright f1.4 focal ratio for isolating the subject against a blurred background. This is brighter by 2/3 of a stop than the Sony FE 55mm f1.8 ZA or Sony FE 50mm f1.8 which allows for better background isolation and shorter shutter speeds and/or lower ISO values.

As the FE 50mm f1.4 ZA is not exactly cheap at 1500 EUR/USD it is expected to perform on a very high level. To find out whether this holds true I tested its optical qualities on the 42MP Sony A7R II camera body against several other lenses, including the Zeiss Otus 55mm f1.4 (my current reference standard lens) and the Sigma 50mm f1.4 Art (a cheaper alternative now available in the e-mount). So if you’re interested in which high performance standard prime lens to choose for your Sony mirrorless system, you’ve come to the right place! 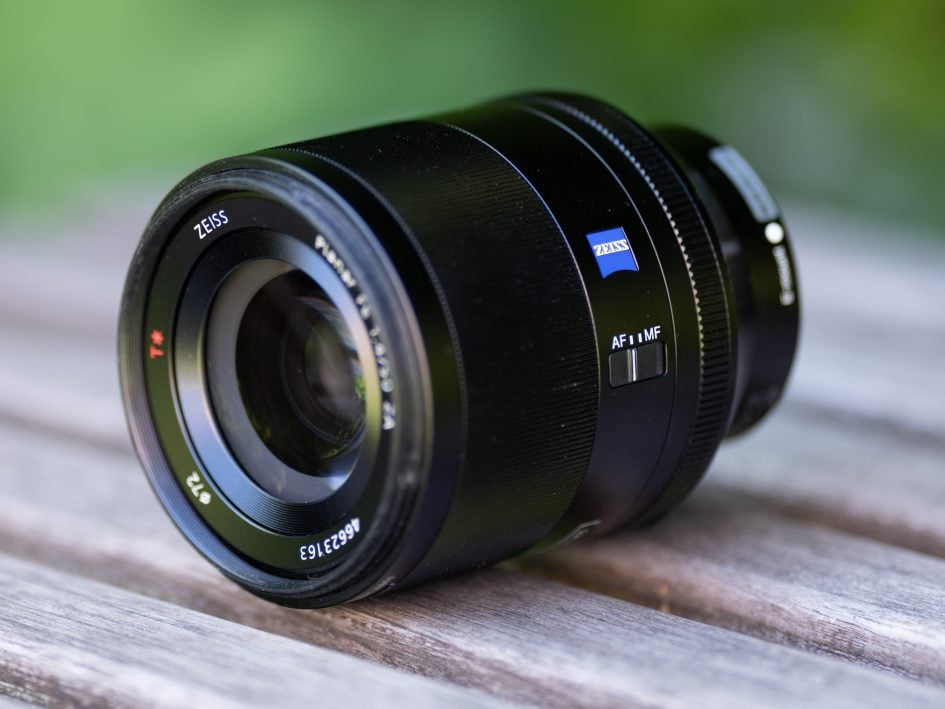 Optics: The lens is a pretty complex design with 12 elements (including one aspherical) in 9 groups. But this is par for the course with the Sigma Art and the Zeiss Otus sporting 13/8 resp. 12/10 elements/groups. The Sony FE 55mm f1.8 ZA is a much simpler design with only 7 elements in 5 groups but it has three aspherical elements. [+] 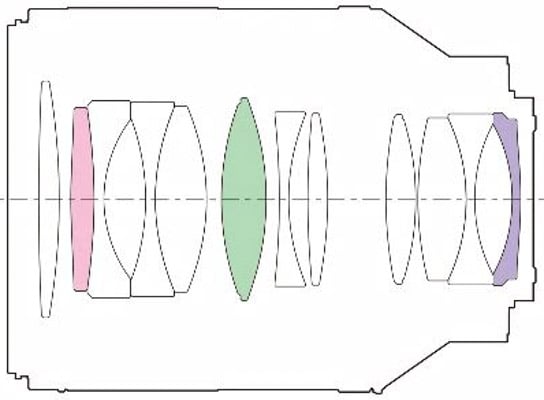 Auto focus: Built-in AF drive. Manual-focus override is by simply turning the focus ring. The focus ring operates as focus-by-wire but it has a linear gearing which makes smooth focus pulling for videographers easy. The FE 55mm f1.8 ZA has non-linear focus-by-wire and like the FE 50mm f1.4 ZA has no distance or dof markings. Focus on the Sigma Art and Zeiss Otus works differently as both have a direct linear mechanical coupling between the focus ring and the focus action. They also offers the distance and dof markings that normally come with lenses designed for DSLRs. [+]

Both Sony ZA lenses come with a soft pouch and the lens hood is included and is reversible for transport. The Sigma Art comes equipped with a nice padded pouch but no strap while the Zeiss Otus comes without pouch. [0] 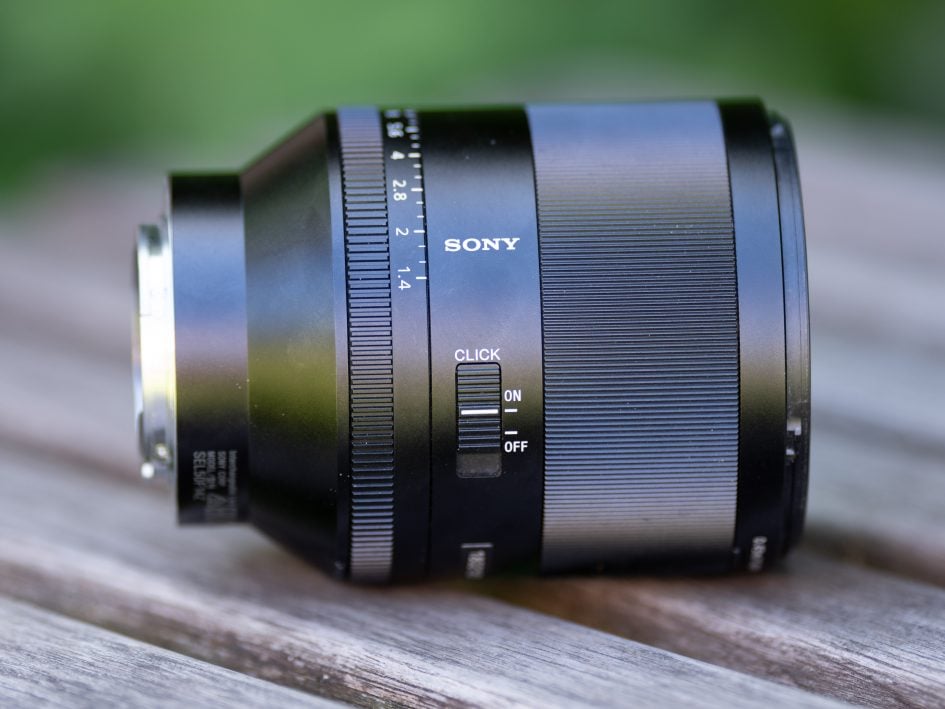 Sealing: Both Sony ZA lenses have special weather-sealing throughout the construction but lack a rubber sealing at the lens-mount. The Zeiss Otus and the Sigma Art are not especially sealed. [+]

The score in the “features-department” is 0[-]/6[0]/6[+], the most prominent features of the lens being its de-clickable aperture ring and its protection against the elements. 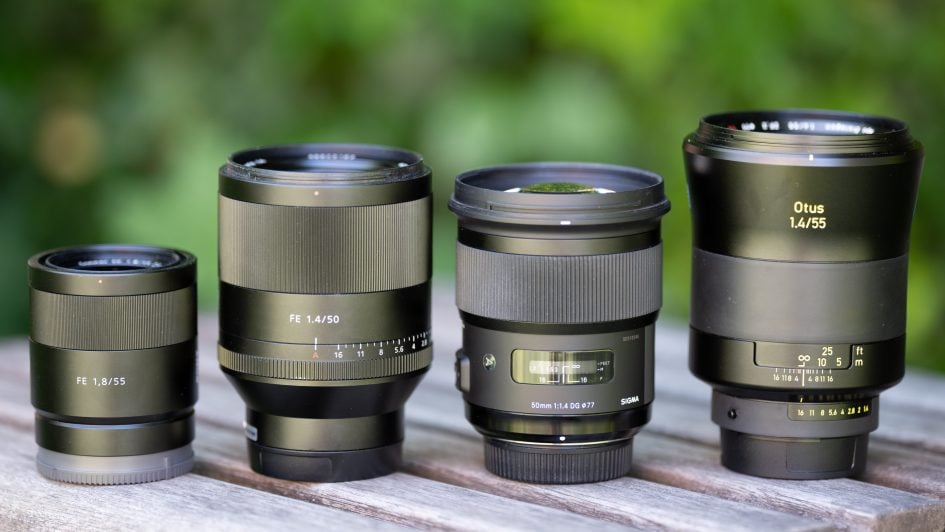 If you want a standard lens (45 to 58mm focal length) with an f1.4 focal ratio and autofocus for Sony E-mount full-frame cameras there are only two alternatives:

Other alternatives include manual focus lenses or lenses with slower focal ratios or shorter focal length:

How big is the difference between 50mm and 55mm focal length? Here is the angle of view that the Sony FE 50mm f1.4 ZA covers on a full-frame body compared to the FE 55mm f1.8 ZA:

Focus accuracy and repeatability is critical to consistently produce sharp shots especially with large aperture lenses. Repeatability (the accuracy of focus on the same subject after repeated focus-acquisition) of this lens is very good (measured 98.4% in Reikan FoCal) with no outliers over a series of 40 shots. There is only a very slight focus variation whether the lens focuses from a closer distance or from infinity.

The lens focuses in around 0.9 sec on a Sony A7R II from infinity to 0.63m (1:10 magnification), which is relatively slow. The Sony FE 55mm f1.8 ZA and the Sigma Art (on a Nikon Z7 with FTZ adapter) move in around 0.7 resp. 0.6 sec. The focus ring of the FE 50mm f1.4 ZA is 33mm wide. It moves very smoothly and can easily be operated with one finger just like the FE 55mm f1.8 ZA. The Zeiss Otus also has a silky smooth AF operation. Only the Sigma Art has a much stiffer mechanical coupling between the focus ring and the focus action.

AF-operation of the Sony lenses in this comparison is inaudible from the outside and if you record video with the built-in microphone. The Sigma Art produces an audible focus noise. As you pull focus, you’ll notice some focus breathing: the image of the Sony FE 50mm f1.4 ZA becomes 7% more magnified when I adjusted the focus from infinity to 0.63m. This could be distracting when shooting videos but is par for the course: the other lenses in this comparison all increase their magnification between 5% and 7%.

Check prices on the Sony FE 50mm f1.4 ZA at Amazon, B&H, Adorama or WEX. Alternatively get yourself a copy of my In Camera book or treat me to a coffee! Thanks!
Pages: 1 2 3 4 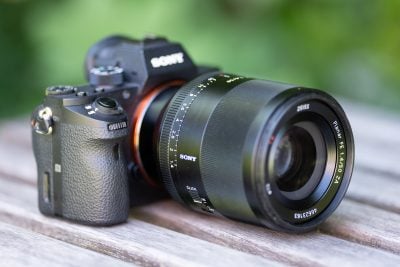 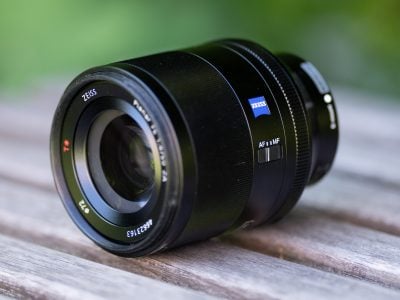 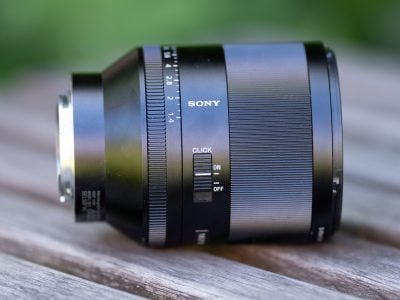