A 24-70mm f2.8 zoom lens is the workhorse for many professional photographers and aspiring amateurs alike. And no camera system is competitive without such a lens delivering very good optical quality. In 2016 the FE 24-70mm f2.8 G Master was Sony's showcase for a large aperture standard zoom lens and helped establish the excellent reputation for its G Master series with sharp to very sharp and contrasty images, low color aberrations and a pretty nice Bokeh. Optical performance is complemented by a high-end feature set including a zoom-lock, lockable lens-hood, well-padded lens case plus strap, and a focus-lock button. But the competition has not been sitting still: Tamron and Sigma now offer more recent standard zoom lenses that come close or even surpass the optical performance of the Sony especially at the long end - while crucially costing much less. In the light of full-frame sensors now reaching and surpassing 60MP it could be time for Sony to update the optical formula of their 24-70mm zoom lens to stay at the top of the game. But their current FE 24-70mm f2.8 G Master still clearly earns a recommendation.

Check prices on the Sony FE 24-70mm GM at Amazon, B&H, Adorama, or Wex. Alternatively get yourself a copy of my In Camera book or treat me to a coffee! Thanks!

The Sony FE 24-70mm f2.8 GM is a standard zoom lens for its full-frame Alpha mirrorless cameras. The wide to short telephoto range and bright f2.8 focal ratio make it ideal for portraits, event and wedding photography, along with general-purpose use. Announced in 2016, the FE 24-70mm f2.8 was one of Sony’s first G-Master, or GM, lenses, claiming the company’s best optical quality to date. Like most lenses in the system, it relies on the camera body to provide image stabilization, and dispenses with the mechanically coupled focus ring for a focus-by-wire instead. Plus it has a customisable button which can be assigned various functions like AF-Lock.

For this review I tested the Sony FE 24-70mm f2.8 GM standard zoom lens on the 42MP Sony A7R II camera body. I compared it to the more recent Sigma 24-70mm f2.8 DG DN Art and Tamron 28-75mm f2.8 Di III as interesting – not to mention more affordable – third party alternatives. So if you’re interested in which standard zoom lens to choose for your Sony mirrorless system, you’ve come to the right place!

Optics: The Sony has 18 elements (including 2 special dispersion elements and 3 aspherical element) in 13 groups. That makes 26 glass/air surfaces where reflections can cause problems. Sony employs nano coating to reduce reflections. The Sigma has a slightly more complex design, the Tamron’s is a bit simpler. [+]

Auto focus: Yes with built-in AF drive. Manual-focus override is by simply turning the dedicated focus ring at the front of the lens. The focus ring has a non-linear gearing which allows for very precise manual focus but makes smooth focus pulling for videographers pretty hard. As is usual with lenses for mirrorless cameras there are no distance or dof markings on the lens. The Tamron is similar while the Sigma has an almost linear gearing between the focus ring and the focus action. [+]

There’s a focus lock button on the lens which can also be assigned a different function depending on the camera body. That’s similar to what the Sigma offers. Both the Sony and Sigma also have a zoom lock switch arresting the lens at 24mm. But while you can unlock the Sigma zoom by simply turning the zoom ring the Sony zoom stays put. [+]

Lens profile: The lens comes with a lens profile for vignette-, CA- and distortion-compensation which can be controlled from the camera. Adobe’s RAW converter (as of version 12.2) does not recognize the profile completely: vignette is compensated as it was set in camera (but you cannot switch between off and auto in post-processing) while CA-compensation is always ON, distortion compensation always OFF. To get rid of the distortions in RAW files you need to activate the Adobe supplied lens profile. [+]

Covers full frame/FF or smaller. Same with the competition. [+]

The lens comes with a nice padded lens case plus strap, the lens hood is included, reversible for transport, and has a lock to prevent it from accidentally falling off. That’s the same as for the Sigma. The Tamron comes only equipped with the lens hood. [+]

Aperture ring: No, just like the other lenses in this comparison. [0]

Sealing: yes, a rubber grommet at the lens-mount plus further special weather-sealing throughout the construction. The Sigma is similarly equipped while the Tamron only has a sealing at the lens-mount. [+]

The market for full-frame 24-70mm zooms with a large f2.8 aperture is pretty crowded if you include optical designs that were developed for DSLRs and can be used via adapter on a mirrorless camera. But choices slim down once you focus on original native mirrorless designs:

Here is the angle of view that the Sony FE 24-70mm f2.8 GM covers with its 2.9x zoom (with distortion compensation):

Focus accuracy and repeatability is critical to consistently produce sharp shots. Repeatability (the accuracy of focus on the same subject after repeated focus-acquisition) of this lens at 70mm focal length is very good when the lens is focusing from infinity but drops considerably in sharpness and repeatability when coming from a closer distance. In a mixed test Reikan FoCal measured 96.0% with no outliers over a series of 40 shots. That’s not bad but average sharpness was 6% lower in shots where focus came from a closer distance with some shots 10% less sharp. You may not notice this under normal viewing conditions but it robs the lens of some acuity when viewed close. I didn’t detect any hunting. At 70mm focal length the lens focuses in around 0.7 sec from infinity to 0.8m (1:10 magnification), which is as fast as the Tamron and Sigma.

The zoom ring turns through 75 degrees and has a 24mm wide rubber surface with a good grip. It turns stiffly and cannot be operated with one finger. The lens shows a little zoom creep but the lock at 24mm can prevent that. The focus ring is 18mm wide and is located at the front of the lens. It moves super smooth and is so sensitive to touch that I often accidentally switched the camera to focus magnifier which can be annoying at times.

AF-operation of the Sony is inaudible from the outside or if you record video with the built-in microphone. And as you pull focus, you’ll notice only very little focus breathing: the image gets slightly less magnified by 1% at closer focusing distances. This should make videographers happy.

I also tested whether Sony’s zoom lens allows you to change the focal length without altering its focus. This characteristic is called parfocal. I manually focused the lens at 70mm and then slowly zoomed back to 24mm checking focus on the way. The Sony FE 24-70mm f2.8 GM kept focus perfectly – until I hit the 24mm mark where the lens became visibly defocused:

Check prices on the Sony FE 24-70mm GM at Amazon, B&H, Adorama, or Wex. Alternatively get yourself a copy of my In Camera book or treat me to a coffee! Thanks!
Pages: 1 2 3 4 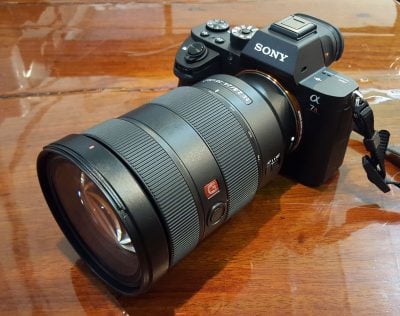