The FE 12-24mm f2.8 becomes another worthy member of Sony’s premium G Master series, delivering excellent quality results. The coverage takes you from wide to extremely wide with a bright constant f2.8 aperture. It’s a lens for those who demand the best performance and have the budget to pay for it. But if your pockets aren’t as deep, consider Sony’s own FE 12-24mm f4G which matches the range but loses a stop of aperture and the ultimate sharpness at half the price. Or if you can sacrifice the widest coverage then Sigma’s 14-24mm f2.8 DG DN has the same bright f2.8 focal ratio and delivers excellent quality at just under half the price.

Check prices on the Sony FE 12-24mm f2.8 GM at B&H, Adorama, WEX or Calumet.de! Alternatively get yourself a copy of my In Camera book or treat me to a coffee! Thanks!

The FE 12-24mm f2.8 GM shares the same focal range as the earlier FE 12-24mm f4G, but with an aperture that’s one stop brighter. As a member of the G Master series, Sony also claims the f2.8 model delivers higher resolution and contrast especially towards the corners, reduced flare and ghosting, and remains rectilinear out to the extremes too. It’s inevitably larger and heavier as a result, measuring 98x137mm and weighing 847g versus 87x117mm and 565g for the earlier f4G model, but these sizes do include built-in petal lens hoods. The new lens is of course dust and moisture-resistant. Find out everything you need to know about the lens, including sample images and movies in my video review below, or keep scrolling for a written version!

Optics: The Sony FE 12-24mm f2.8 GM has 17 elements in 14 groups including 5 special dispersion elements and 4 aspherical elements. This is similar to the other lenses in this comparison. To reduce reflections causing flare, glare and ghosting the Sony f2.8 GM employs Nano-coating. It also has fluorine-coating on the front element to repel water, dust, and dirt and make cleaning easier like the Sigma DN. [+]

Filter-thread: None of the lenses in this comparison offer a filter-thread – their bulbous front elements prevent that. So you need to get some non-standard mounting system and a new set of filters – or use gel filters in the rear filter holder of the Sony f2.8 GM and Sigma DN. Keep in mind though that gels cannot be rotated which precludes the use of polarizers. Sony and Sigma supply a template with their lens to cut out the gels. [0]

Auto focus: Yes with built-in AF drive. Manual-focus override is by simply turning the dedicated focus ring at the front of the lens. It has a linear gearing covering the focus range in about 120 degrees. This is ideal for smooth focus pulling in videos and still precise enough for manually focusing. The Sony f4.0 G has a somewhat restricted variable gearing between 90 and 200 degrees for the full focus range and the Sigma DN offers the usual fully variable gearing. All three lenses also have an extra button which can be assigned many different functions e.g. AF-lock. [+]

Lens profile: All tree lens come with a lens profile for vignette-, CA- and distortion-compensation which can be controlled from the camera. [+]

Covers full frame/FF or smaller. Same with the other lenses. [+]

Aperture ring: None of the lenses in this comparison has an aperture ring. [0]

Sealing: yes, a rubber grommet at the lens-mount plus further special weather-sealing throughout the construction, just like the other two lenses. [+]

The score in the “features-department” is 1[-]/6[0]/6[+]. The Sony FE 12-24mm f2.8 GM offers a good feature set: It has a constant bright f2.8 focal ratio, a professional build including thorough weather sealing, provides for the use of rear gel filters, and starts at 12mm focal length giving a visibly wider field-of-view than other lenses starting at 14mm. But it is the largest, heaviest, and by far most expensive of the three lenses in this comparison.

If you want to cover the range of focal lengths from 14mm to 24mm there are really only two alternatives to the Sony FE 12-24mm f2.8 GM available in the native E-mount:

Other alternatives cover different focal lengths like the manual focus Laowa 10-18mm f4.5-5.6 which is currently the only full frame zoom lens starting at 10mm focal length with a recti-linear projection. Or you use older DLSR designs via mount adapter.

Focus accuracy and repeatability is critical to consistently produce sharp shots. Repeatability (the accuracy of focus on the same subject after repeated focus-acquisition) of the Sony FE 12-24mm f2.8 GM at 24mm focal length is very good (measured 99.0% in Reikan FoCal) with no outliers over a series of 40 shots. There is also no focus variation whether the lens focuses from a closer distance or from infinity. At 24mm focal length the lens focuses in around 0.6 sec from infinity to 0.35m (1:10 magnification), which is faster than the Sigma 14-24mm f2.8 DG DN Art which took 0.7 sec but a bit slower than the Sony f4.0 G at 0.5 sec.

The zoom ring turns through 60 degrees and has a 17mm wide rubber surface with a good grip. It needs less force than the Sigma. The focus ring at the front is 12mm wide and moves smoothly.

AF-operation of the Sony f2.8 GM is inaudible from the outside or if you record video with the built-in microphone. Same with the Sony f4.0 G and Sigma DN.

Check prices on the Sony FE 12-24mm f2.8 GM at B&H, Adorama, WEX or Calumet.de! Alternatively get yourself a copy of my In Camera book or treat me to a coffee! Thanks! 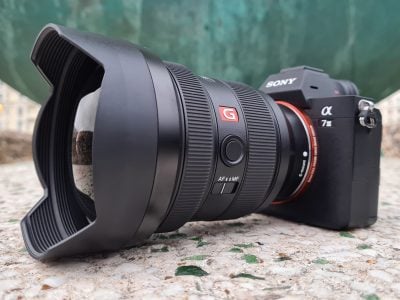 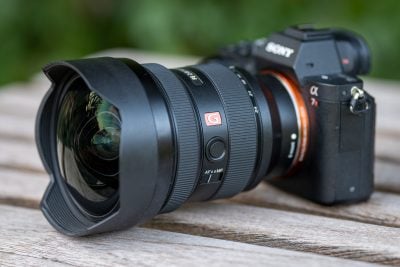 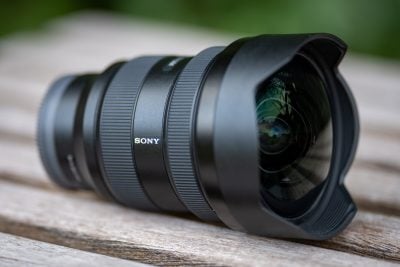