The E 70-350mm is an attractive lens for any Sony APSC mirrorless owner who wants reasonable reach for sports and wildlife without the cost or heft of the really big guns in the system. It may not attain the ultimate reach, sharpness or brightness of the 200-600 or 100-400, but it’s less than half the price, not to mention considerably more manageable while still delivering respectable quality and focusing speed. If you’re thinking of going full-frame in the future, then the FE 70-300mm makes more sense for only a little extra, and if you don’t mind the heft and possibly slower focusing, Sigma has a number of affordable and very long zooms in its catalogue. But if portability and speed are important and you’re committed to the APSC format, then the E 70-350mm will quickly bring distant subjects close without breaking the bank or your back. Recommended.

Check prices on the Sony E 70-350mm at B&H, Amazon, Adorama, or Wex. Alternatively get yourself a copy of my In Camera book or treat me to a coffee! Thanks!

The Sony E 70-350mm f4.5-6.3 G OSS is a telephoto zoom for its E-mount mirrorless cameras with APSC sensors, like the A6000 series. Announced in August 2019 alongside the E 16-55mm, it’s Sony’s second telephoto zoom designed specifically for its APSC bodies, following the much older, shorter and cheaper E 55-210mm f4.5-6.3 OSS; the new model is designed as a premium option for those who demand better quality and desire longer reach without the even higher cost or bulk of the full-frame G Master options. It costs roughly three times more than the 55-210mm but half the price of the full-frame FE 200-600mm or two and a half times cheaper than the FE 100-400mm. Its closest rival from Sony is the full-frame FE 70-300mm f4.5-5.6 G OSS which costs a little less.

The lens barrel of the E 70-350mm is sealed against dust and moisture, measures 142mm by 77mm with a 67mm filter thread, and weighs 625g. So it’s essentially the same length as the FE 70-300mm which is also weather-sealed, but 7mm narrower, about 230g lighter and uses slightly smaller filters. The optical design employs 19 elements in 13 groups, has a variable f4.5-6.3 focal ratio, seven aperture blades, a closest focusing distance of 110-150cm, and includes optical stabilisation. The FE 70-300mm focuses closer at 90cm and has nine aperture blades, but the E 70-350mm zooms longer and employs XD Linear motors for quicker and quieter focusing. Both lenses have customisable focus hold buttons, switches to enable or disable autofocus and optical steadyshot stabilisation, as well as locking switches which hold the barrels retracted when they’re at their shortest 70mm focal length; the FE 70-300mm additionally sports a focus limiter switch.

In my review video below I’ll demonstrate the features of the lens along with examining its performance. If you prefer a written version, check out my separate quality, samples and verdict sections! 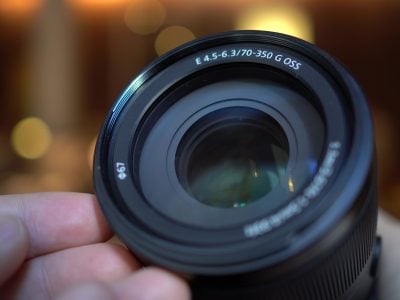 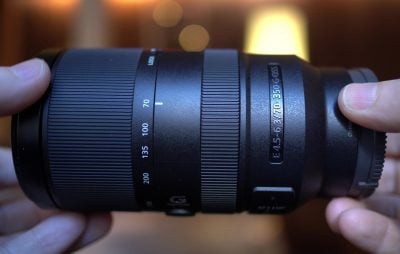 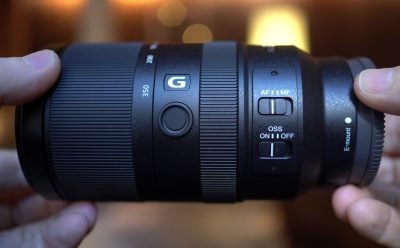