The Sony E 16-55mm f2.8 is the unashamedly high-end general-purpose zoom the better Alpha cropped APSC bodies have been crying out for. I really enjoyed shooting with it on the A6600 - like other lenses of a similar specification, it delivers a useful general-purpose range from wide to short telephoto, covering you from landscapes and interiors to close-ups and portraits. The constant f2.8 focal ratio allows you to shoot in low light and achieve attractive shallow depth-of-field effects and the rendering looks good - sharp where you want it and buttery where you don’t. In my tests so far (and I hope to do more) the optical quality is outstanding in terms of detail across the frame at all focal lengths and aperture values, and while there are also solid options on rival systems, the Sony managed to out-perform them at least to some degree. Impressively it’s also smaller and lighter than most 16-55mm f2.8 lenses without compromising on build quality, and this is important when mounting it on one of Sony’s equally compact A6000 bodies - I’m relieved it didn’t feel unbalanced in use. But it’s also the most expensive 16-55mm f2.8 lens to date, a little pricier than the Fujifilm version, and much more so than the Canon and Nikon 17-55mm f2.8 DSLR models, although these are considerably older designs. So the Sony E 16-55mm f2.8 is priced high, doesn’t have optical stabilisation and again I wish it focused closer, but there’s no arguing with its quality and portability. Certainly the price will have you contemplating if now is the time to switch to full-frame, but if you’re sticking with a Sony APSC body and are looking for the best quality general-purpose zoom to go with it, the E 16-55mm f2.8 is the one for you and comes Highly Recommended.

Check prices on the Sony E 16-55mm f2.8 at B&H, Amazon, Adorama, or Wex. Alternatively get yourself a copy of my In Camera book or treat me to a coffee! Thanks!

The Sony E 16-55mm f2.8 G is a high-end general-purpose zoom for E-mount mirrorless cameras with APSC sensors, like the A6000 series. Announced in August 2019 alongside the E 70-350mm, it’s Sony’s first f2.8 zoom designed for APSC mirrorless bodies and a model that owners of its higher-end cameras in the series have been crying out for. Sony describes it as a G Master quality lens and the price reflects this, costing around $1400 or 1200 pounds, making it the most expensive option in Sony’s APSC lens catalogue, not to mention pricier than similar lenses for rival systems.

The lens itself is a fairly compact and lightweight design that feels surprisingly well-balanced on the small A6000 bodies; I used it almost exclusively when testing the A6600 and found the combination comfortable while remaining portable. From a personal viewpoint, it felt like a better-balance to me on the A6600 than Fujifilm’s slightly heftier XF 16-55mm f2.8 does on an X-T3. The dust and moisture-sealed barrel on the Sony measures 73mm in maximum diameter, 100mm long and weighs 494g, so when mounted on the A6600 the combination totals a very reasonable kilogram. The lens includes a customisable focus hold button, a switch for manual or autofocus, employs a 67mm filter thread and is supplied with a petal lens hood.

The optical design employs 17 elements in 12 groups including two Advanced Aspherical and three ED elements, has a constant f2.8 focal ratio throughout the 16-55mm range, sports nine aperture blades and a closest focusing distance of 33cm for 0.2x magnification. Sadly there’s no optical stabilisation, so to iron out any wobbles you’ll either need to mount it on a body with IBIS like the A6500 or A6600, or use it with a gimbal. Focusing is quick and quiet thanks to an XD linear motor – a first for an E-mount APSC lens – and videographers will be pleased to learn the manual focusing ring has a linear response. Find out if this lens is right for you in my full review video below, or if you prefer, go through the text versions on my quality, samples and verdict pages! 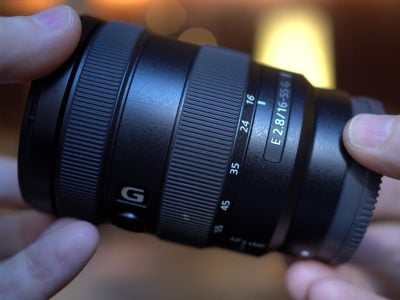 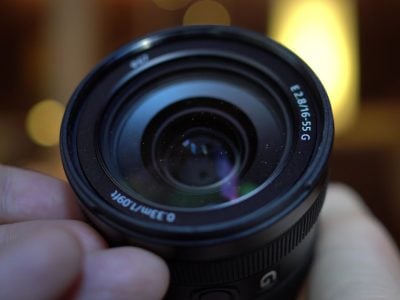 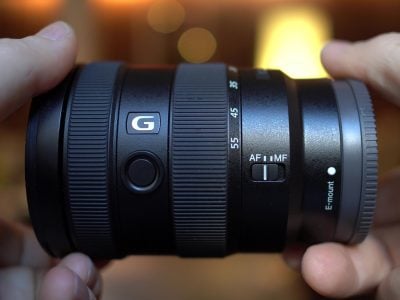