The Sigma 85mm f1.4 DG DN Art is a mild telephoto lens designed for full-frame mirrorless cameras and available in E-mount and L-mount versions. It's an excellent example of what you can achieve when designing a new 85mm f1.4 lens from the ground-up for mirrorless cameras: not only is the 85mm f1.4 DG DN smaller and half the weight of the earlier 85mm f1.4 DG HSM but Sigma's also improved optical performance over what was already a very respectable lens. This makes the newer DG DN version optically the best 85mm f1.4 lens I've tested so far. Packed with all the right features and coming at a price that's one third less than the Sony FE 85mm f1.4 G-Master, the Sigma clearly earns a Highly Recommended! Let's hope that Sigma soon is able to offer their new lens with Nikon Z-mount and Canon RF-mount too.

Check prices on the Sigma 85mm f1.4 DG DN Art at B&H, Adorama, WEX or Calumet.de! Alternatively get yourself a copy of my In Camera book or treat me to a coffee! Thanks!

The Sigma 85mm f1.4 DG DN Art is a mild telephoto lens designed for full-frame mirrorless cameras with E-mount and L-mount. Its focal length and bright f1.4 focal ratio make it ideal for portraits but also useful for street photography or picking-out details in urban or natural landscapes. Announced in August 2020, it’s only the second large aperture prime lens after the 35mm f1.2 DG DN Art in Sigma’s ART line which was specifically designed for mirrorless cameras (denoted by the “DN” moniker). These primes are complemented by two zoom lenses: the 14-24mm f2.8 DG DN Art and 24-70mm f2.8 DG DN Art.

As optical designs for mirrorless cameras with their shorter flange distance have to cope with fewer restrictions it is interesting to see what lens manufacturers make of this new freedom. In case of their 85mm f1.4 design Sigma obviously opted for small and light which is good as the old DSLR design from 2016, the 85mm f1.4 DG HSM Art, was a huge beast of a lens at 152mm (6.0 in.) length and 1.25kg (2.8lb.) weight (for Sony E-mount). The new DG DN is only 96mm (3.8 in.) long and weighs 625g (1.4lb.) – a huge difference! This makes the new lens even 11mm shorter and 200g lighter than the Sony FE 85mm f1.4 GM. Sigma also added a de-clickable aperture ring which makes it great for video work. And the lens has an additional button which can be assigned AF-lock or other functions.

Image stabilization: No optical stabilization of the lens. The Sony A7 or Panasonic DC-S1 camera bodies provide built-in sensor-shift stabilization. Same with the other two lenses. [0]

Auto focus: Built-in AF drive with stepping motor. Manual-focus override is by simply turning the focus ring. The focus ring has a variable gearing which allows for very precise manual focus when turned slowly but cannot be switched to linear gearing for smooth focus pulling. There’s a customizable focus-lock button AFL on the barrel but no distance markings. The Sony also has variable gearing and a focus-lock button. Focus on the Sigma HSM works differently as is usual for lenses designed for DSLRs: It has a direct linear coupling between the focus ring and the focus action and offers a display for focus distance and depth of field but no focus-lock button. [+]

Lens profile: The lens comes with a lens profile for vignette-, CA- and distortion-compensation which can be controlled from the camera. Adobe’s RAW converter (as of version 12.4) does not recognize the profile completely: vignette is compensated as it was set in camera (but you cannot switch between off and auto in post-processing) while CA-compensation is always ON, distortion compensation always OFF. To get rid of the distortions in RAW files you have to activate manual correction. [+]

Covers full frame or smaller. Same with the other two lenses. [+]

The Sigma 85mm f1.4 DG DN Art has a nicely padded lens case, the lens hood is included, reversible for transport, and has a lock to prevent it from accidentally falling off. The Sony also comes with a pouch and a lockable lens hood. The front-end of Sony’s lens hood is rubberized which prevents dinks from setting the lens down on the hood and also provides more grip on smooth surfaces. Same with the Sigma HSM except the lens hood has no lock and no rubber font-end. [+]

Aperture ring: yes with 1/3 stop clicks. The lens has a switch to turn the clicks of so that the aperture can be operated continuously, smoothly, and noise-free. It also comes with a dedicated lock switch to prevent accidental shifting between aperture control from the ring or the camera. Same with the Sony except for the aperture lock. The Sigma HSM has no aperture ring. [+]

Sealing: yes, a rubber grommet at the lens-mount plus further special weather-sealing throughout the construction, just like the Sony and Sigma HSM. [+]

The score of 0[-]/2[0]/13[+] shows that the Sigma 85mm f1.4 DG DN Art is very well-featured with its small size and weight and the unique option to get the lens-mount swapped. There’s hardly anything to complain about – on paper.

And if you’re interested in the performance of the Sony or Sigma’s DSLR design check out my in-depth Sony FE 85mm f1.4 GM review and the Sigma 85mm f1.4 DG HSM Art review.

As a large aperture 85mm lens is the most sought-after portrait lens for full-frame cameras there is a broad supply of them. But if you don’t want to use adapters nor rely on manual focus lenses there is really only one alternative for L-mount and three alternatives for E-mount:

Focus accuracy and repeatability is critical to consistently produce sharp shots – especially with the narrow depth-of-field at f1.4. Repeatability (the accuracy of focus on the same subject after repeated focus-acquisition) of this lens is pretty good (measured 98.1% in Reikan FoCal) with no outliers over a series of 40 shots. There is only a little focus variation whether the lens focuses from a closer distance or from infinity and I detected a bit of hunting on complicated subject structures. The lens focuses in around 0.8 sec from infinity to 1m (1:10 magnification), which is not overly fast but still better than the 1 sec of the Sony FE 85mm f1.4 GM.

AF-operation of the new lens is inaudible from the outside or if you record video with the built-in microphone.

As you pull focus, you’ll notice quite some focus breathing: the image became 11% more magnified when I adjusted focus from infinity to 1m. This is very visible and could be distracting when shooting videos. But the Sony FE 85mm f1.4 GM and Sigma 85mm f1.4 DG HSM Art show even more focus breathing at 13%.

Check prices on the Sigma 85mm f1.4 DG DN Art at B&H, Adorama, WEX or Calumet.de! Alternatively get yourself a copy of my In Camera book or treat me to a coffee! Thanks!
Pages: 1 2 3 4 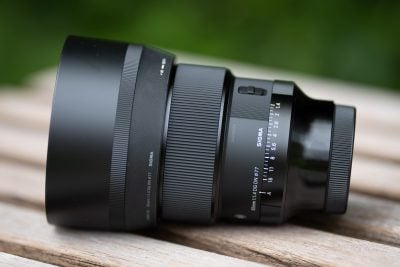 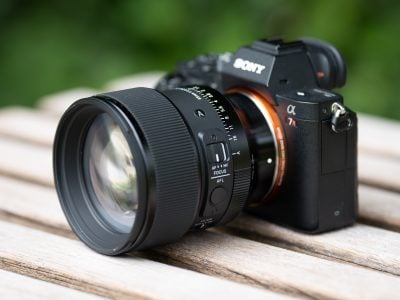 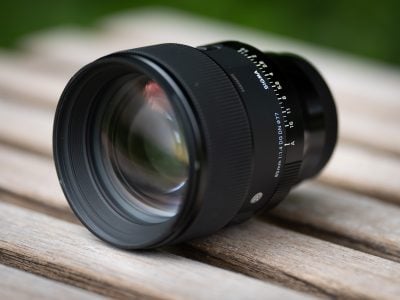