The new Sigma 85/1.4 Art finally brings Sigma's 85mm prime up to the performance one can expect from a modern lens designed with 36+ MP sensors in mind: It offers the best performing FF/FX-corners and the softest Bokeh of any 85mm lens I know. Plus it is astonishingly resilient against strong contra-light. And although it is not the sharpest in the center, has a little more longitudinal CAs than others, and is a huge and heavy beast of a lens I'd award Sigma's new 85/1.4 Art a Highly Recommended. But this is under the caveat that the AF-issues are singular problems with my copy of the lens.

Check prices on the Sigma 85mm f1.4 Art at Amazon, B&H, Adorama, or Wex. Alternatively get yourself a copy of my In Camera book or treat me to a coffee! Thanks!

The Sigma 85mm f1.4 DG HSM Art is a short telephoto lens available in Canon, Nikon, and Sigma mounts. Announced in September 2016, it is the longest f1.4 prime lens in Sigma’s “Art” series. The new lens is successor to the Sigma 85mm f1.4 EX DG HSM from 2010 and comes with a a host of new features and a completely new optical design aimed at bringing performance up to match the new demanding high resolution full-frame sensors.

The new lens is compatible with Sigma’s USB dock for fine-tuning or firmware updates and is the first of the “Art” series to have a rubber sealing protect the lens mount. The Nikon mount version also puts away with the mechanical coupling of the aperture and employs the electromagnetic diaphragm mechanism instead. As with all “Art” lenses you can pay to have the mount swapped if you change your camera system. What’s new though is that through Sigma’s new mount converter MC-11 the lens can also be directly mounted to any Sony E-mount camera body. The MC-11 works with all Art, Sports, and Contemporary lenses from Sigma with Canon- and Sigma-mount and supports the interchange of all electronic data as well as image stabilization and full AF support – the latter even for Fast Hybrid AF. But first and foremost the question is: how far did Sigma manage to improve performance over the ageing predecessor and can the lens fulfil the high expectations connected with a member of their “Art” line. To find out I tested the Sigma 85mm f1.4 Art on Nikon’s 36MP D810 and compared the results against the Zeiss 85mm f1.4 Otus as the benchmark. 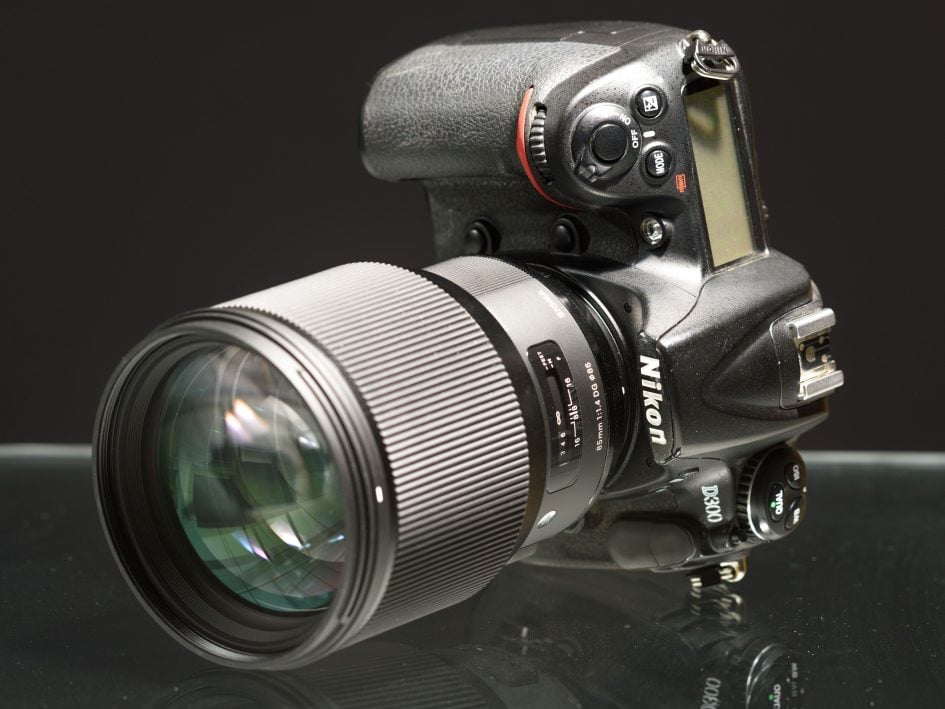 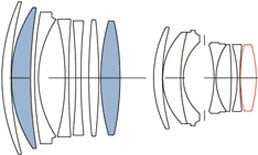 Optics: 14 elements in 12 groups. This is the most complex 85mm design I’ve seen to date. It includes three special dispersion elements. The Nikkor with 9 elements in 9 groups and the Otus at 11/9 are both simpler constructions with a lower number of glass/air surfaces. [0]

Closest focus distance/max. magnification with manual focus: 0.81m (2.6ft) / 1:7.9 which is not very much but about standard among large aperture 85mm lenses. [0]

Filter-thread: 86mm. Same as the Otus but bigger than the 77mm standard for many pro-lenses which the Nikkor employs. So expect to invest into new filters with the new lens. [-]

Image stabilization: No, same as any other fixed focal f1.4 lens. [0]

Autofocus: HSM (Hyper-Sonic Motor), so it also works on bodies that don’t have a built-in AF drive like the Nikon D3x00/5×00. Manual-focus override is by simply turning the focus ring. Same with the Nikkor, the Otus is Manual Focus only. [+]

The lens hood is included and reversible for transport, the lens caps are similar to Nikon’s pincer-type. The lens hood does not cast a shadow from the in-camera flash at 85cm shooting distance. And the lens comes with a nicely padded lens case and strap. [+]

Distance information is relayed to the camera, so the Nikon body can do all the advanced exposure-related stuff with this lens. Same with the Nikkor, but the Otus cannot do that. [+]

Aperture: no aperture ring as with the Nikkor. The Otus has one (only in Nikon ZF.2 version). The Sigma features an electromagnetic diaphragm like Nikon’s newest “E” lenses. So the aperture does not work on Nikon bodies introduced before 2007. [0]

Sealing: A rubber grommet at the lens-mount. [+]

The score in the “features-department” is 3[-]/4[0]/6[+]. In direct comparison to the Nikkor the new Sigma 85mm f1.4 Art is much larger and heavier which together with the larger filter-thread explains the three minus points. Compared to the Otus the Sigma is of similar size and weight but has two major advantages: autofocus and a much lower price. 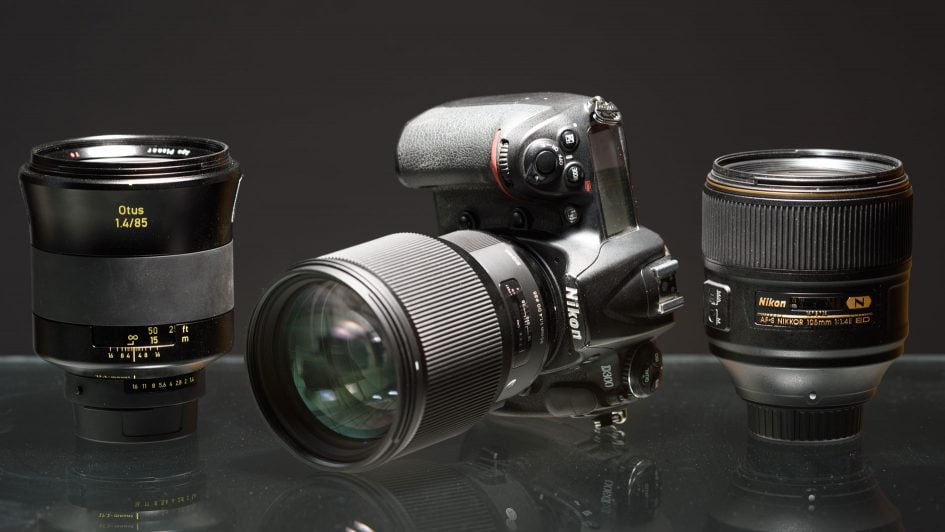 Large aperture 85mm lenses are sort of everybody’s darling: they allow for good background isolation on APS-C/DX and FF/FX cameras alike and produce nice Bokeh. They are good for portraiture but can also be used for other types of photography as well. So it’s no wonder that every lens manufacturer offers at least one lens in this category.

Let’s begin with 85mm lenses with the slightly smaller f1.8 aperture. They do collect 2/3EV less light and produce slightly smaller circles of confusion but as a general rule they are smaller, lighter, and cheaper than their f1.4 brethren. This is also the category where two manufacturers now offer stabilized versions which can more than compensate for the loss in light-collecting power of f1.8 vs. f1.4: There’s the Tamron SP 85mm f1.8 VC for Nikon- Canon- and Sony A-mount (800 EUR) which earned a Highly Recommended in my Tamron 85mm f1.8 VC review and the Zeiss Batis 85mm f1.8 for Sony E-mount (1200 EUR).

Following is an overview of the 85mm f1.4 lenses on offer, none of which has image stabilization:

– Sigma’s AF 85mm f1.4 EX DG HSM lens is still on offer while stock lasts. It is from 2010 and costs around 800 EUR. It received a Recommended in my Sigma 85mm f1.4 EX review but shows its age in comparison to more modern designs.

– If you can work with manual focus there are two major alternatives to consider: The Samyang/Rokinon/Walimex 85mm f1.4 AE for around 350 EUR (see the Samyang 85mm f1.4 review) which is the absolute cheapest way to get a 85mm f1.4 lens. And the Zeiss 85mm f1.4 Otus which earned a Highly Recommended for its benchmark image quality and tank-like build-quality in my Zeiss Otus 85mm f1.4 review but also costs around 3900 EUR.

Then finally there is an alternative with a slightly longer focal length: The recent Nikon AF-S Nikkor 105mm f1.4E ED at 2300 EUR. This is a unique lens in its combination of 105mm focal length and a large f1.4 focal ratio. This together delivers an even better background isolation and the biggest Bokeh balls of any of the above mentioned lenses. And it is also an excellent performer which earned it a Highly Recommended in my Nikon 105mm f1.4E review.

Focus accuracy and repeatability is critical to consistently produce sharp shots. Repeatability (the accuracy of focus on the same subject after repeated focus-acquisition) of this lens showed some disturbing variations. And I had to fine-tune AF with the USB-dock with different values for different distances as I could not get the lens to focus correctly with one single fine-tune value in camera. This is not good! Even after tuning AF with the USB-dock Reikan FoCal measured the consistency of focus at only 89.9% with performance depending on whether defocus was towards the camera or away from it. This behavior occurred also under real life shooting conditions where I found AF with this lens fickle. When shooting the lens wide open I always had to control focus after the shot and often had to repeat for optimum performance. This didn’t instill confidence in the lens. It may be a singular problem of my copy but I’ve heard others report about similar issues.

With regard to speed the lens is no slouch: it focuses quite fast in around 0.7 sec from infinity to 0.85m which is faster than the Nikon 85mm f1.4G. The 50mm broad focus ring has no slack/play between its movement and the focus-action. Its movement is pretty smooth. Focus throw is 130 degrees so manual focusing at f1.4 is pretty easy. It turns the same way as Canon photogs are used to but that is the wrong way for Nikon users. AF-operation is barely audible from the outside and if you record video with the built-in microphone there’s only a slight “tock” at the beginning of focus-movement and the AF-drive is very quiet. As you pull focus, you’ll notice some amount of focus breathing – this is where the image becomes more magnified at closer focusing distances. When I adjusted the focus from infinity to 0.85m on the Sigma, I measured a 13% increase in magnification which is quite noticeable.

Check prices on the Sigma 85mm f1.4 Art at Amazon, B&H, Adorama, or Wex. Alternatively get yourself a copy of my In Camera book or treat me to a coffee! Thanks!
Pages: 1 2 3 4 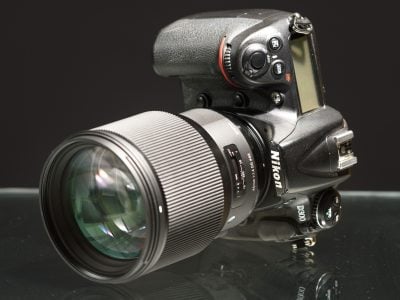 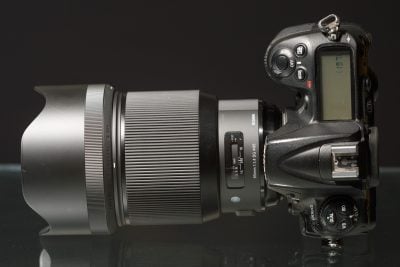