The Sigma 40mm f1.4 Art is a short standard prime lens designed for full-frame sensors and available in Nikon F, Canon EF and Sigma mounts with native Sony E and Leica L versions arriving later in 2019. The 40mm length falls between more common 35mm and 50mm models, but is actually closer to ‘normal’ coverage than either, resulting in a natural perspective that’s ideal for general-use. Originally designed for DSLRs, the lens is on the large and heavy side even compared to its already fairly hefty Art siblings, weighing 1.2 to 1.3kg depending on the mount. But If you can live with the size and weight, the Sigma 40mm f1.4 Art is a winner: Sharp into the corners of a full-frame sensor, very good resistance against flare, glare and ghosting plus a nice background Bokeh and very low color aberrations and coma. Together with thorough weather-sealing and solid build quality the lens justifies its price and although focus shift can mislead phase-detect AF on DSLRs the Sigma 40mm f1.4 Art clearly earns a Highly Recommended!

Check prices on the Sigma 40mm f1.4 ART at Amazon, B&H, Adorama or WEX! Alternatively get yourself a copy of my In Camera book or treat me to a coffee! Thanks!

On a full-frame camera the Sigma 40mm f1.4 Art delivers a field-of-view that’s 10 degrees wider than the standard 50mm lens (57 vs 47 degrees) and 7 degrees narrower than from a 35mm lens. It can still be considered a “normal” lens as its 40mm focal length is indeed closer to the 43mm diagonal of a full-frame sensor than a 50mm lens is. So images shot with this lens should produce a very natural and immersive perspective when viewed from a standard distance (equal to the diagonal of the print or monitor/screen). Use it on an APSC crop sensor and the Sigma 40mm f1.4 Art delivers a field of view that is equivalent to a 60mm lens. Combined with a bright f1.4 focal ratio it is ideal for available-light use and should also deliver shallow depth-of-field effects and background blur that are slightly better than from a 50mm f1.8 lens.

To find out whether the optical performance of the new 40mm f1.4 Art makes it a worthy member of Sigma’s Art line I tested it on a 46MP Nikon Z7 (with FTZ-adapter) and compare it against the Zeiss 40mm f2.0 Batis and the Sony 35mm f1.4 ZA shot on the 42MP Sony A7R II body. 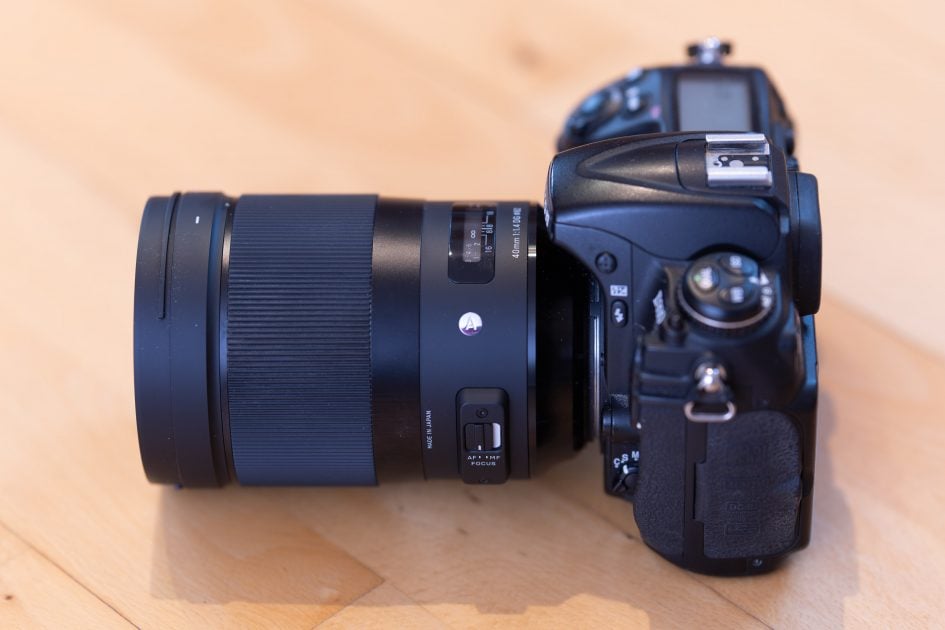 Size (diameter x length): With a diameter of 88mm (3.5in.) the length of the lens varies with the mount: with a Nikon F-mount it’s 129mm (5.1in.), with a Sony E-mount it’s 157mm (6.2in.). Put a Nikon FTZ-adapter on the F-mount version to shoot on a Nikon Z body and you end up with 159mm length. The lens hood adds 50mm (2.0in.) and is 106mm in diameter bringing the total length to a massive 21cm (8.2in.) in front of a modern mirrorless body. This is a huge lens even topping the monstrous Zeiss Otus lenses in length and clearly showing its heritage as a DSLR design that has to cope with the larger flange distances. The Sony ZA is not a small lens either but at 79 x 112mm plus 37mm for the lens hood (98mm diameter) it looks small in comparison. And the Zeiss Batis is even smaller at 81 x 87mm + 40mm for the lens hood (91mm diameter). [-]

Optics: The lens is a pretty complex design with 16 elements (including 6 special dispersion elements and one aspherical element) in 12 groups. That makes 24 glass/air surfaces where reflections can cause problems. There’s fluorine coating on the front to repel water, dust, and dirt and should make for easier cleaning. The Sony ZA has 12 elements in 8 groups, the Zeiss Batis has 9 elements in 8 groups. [+] 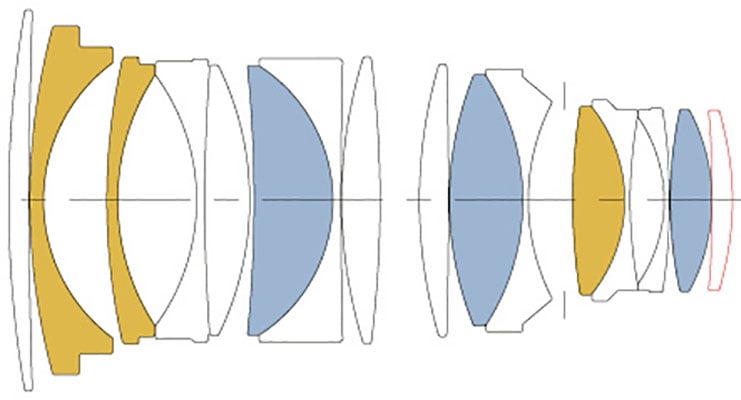 Image stabilization: No optical stabilization of the lens. The Sony A7 or Nikon Z bodies provide built-in sensor-shift stabilization. Same with the Sony ZA and the Zeiss Batis. [0]

Auto focus: Built-in AF drive. Manual-focus override is by simply turning the focus ring. The focus ring has a direct linear mechanical coupling between the focus ring and the focus action and offers distance and dof markings. The Zeiss Batis offers a display for focus distance and depth of field and its gearing is non-linear: this allows for even more precise manual focus when turned slowly but makes smooth focus pulling for videographers almost impossible. Focus on the Sony ZA works the same as with the Zeiss Batis but it has no display of distance or dof. [+]

Aperture ring: no, just like the Zeiss Batis. The Sony ZA offers an aperture ring with 1/3 stop clicks which can be turned off for continuous, smooth, and noise-free operation. [0]

Sealing: yes, a rubber grommet at the lens-mount plus further special weather-sealing throughout the construction, just like the Zeiss Batis. The Sony ZA is similarly sealed inside but lacks the rubber sealing at the lens-mount. [+]

The score in the “features-department” is 2[-]/5[0]/7[+], the most distinguishing features of the lens being its huge size and heavy weight – unfortunately. On a mirrorless body it looks and feels grotesquely unbalanced with the lens weighing twice as much as the body. On the positive side the lens seems well built and its coating and weather sealing should make for trouble-free operation under demanding conditions. Plus Sigma offers the unique option to get the lens-mount swapped. 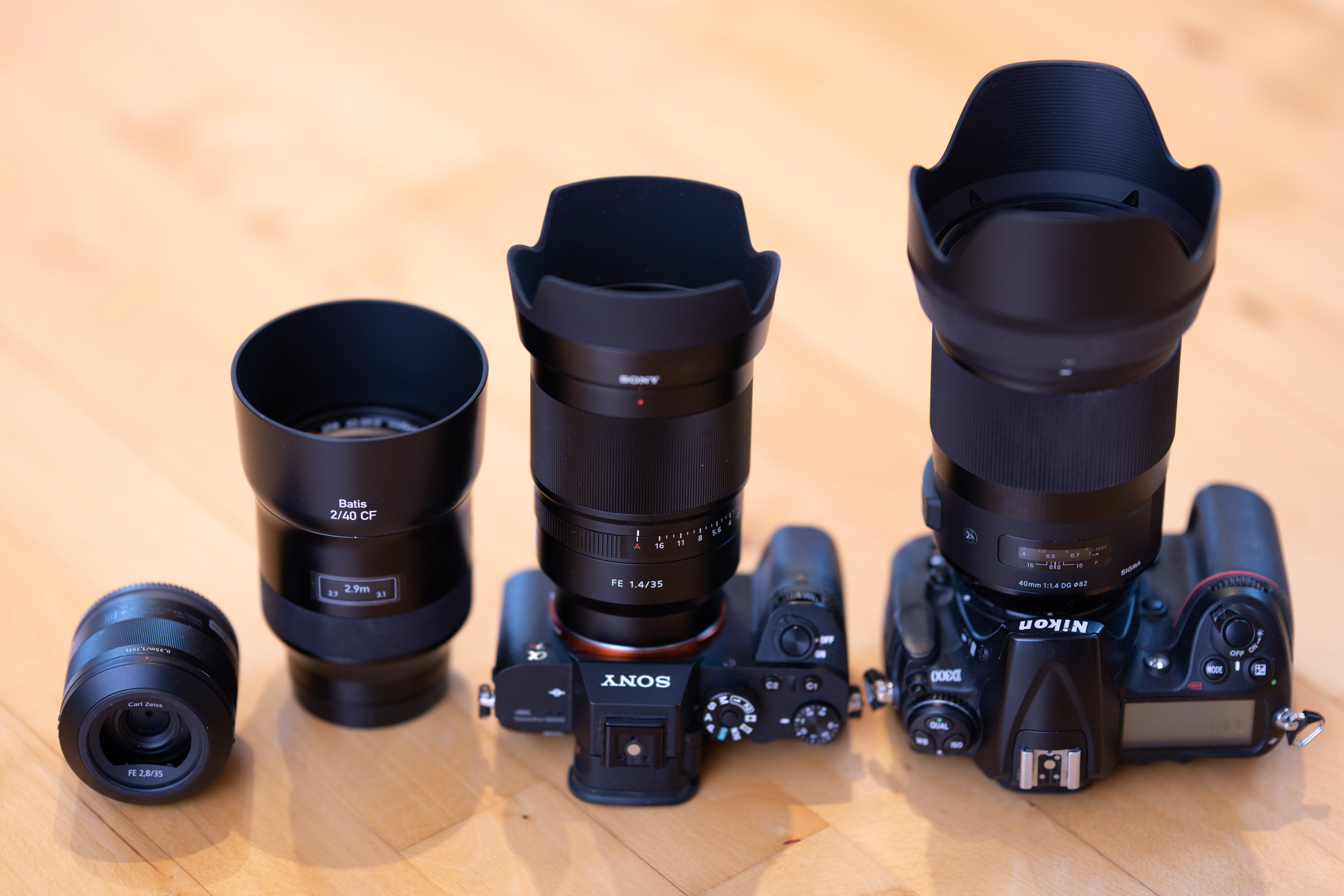 If you want a 40mm lens with an f1.4 focal ratio and autofocus there is no alternative. The closest is a 35mm f1.4 lens or slower or manual focus lenses.

If you’re unsure of how big the differences between 50mm, 40mm, 35mm and even 28mm focal length are, here is the angle of view that the Sigma 40mm f1.4 Art covers on a full-frame body compared to the Sony 35mm f1.4 ZA:

Focus accuracy and repeatability is critical to consistently produce sharp shots especially with large aperture lenses. Repeatability (the accuracy of focus on the same subject after repeated focus-acquisition) of this lens is very good (measured 99.4% in Reikan FoCal) with no outliers over a series of 40 shots. And there is no focus variation whether the lens focuses from a closer distance or from infinity.

The lens focuses in around 0.7 sec on a Nikon Z7 (with FTZ-adapter) from infinity to 0.55m (1:10 magnification), which is quite fast. But both the Sony ZA (0.5 sec) and the Zeiss Batis (0.3 sec) were clearly faster on the Sony A7R II body. The focus ring is 40mm wide and easy to grip. But its movement is a bit stiff and cannot easily be operated with one finger. The Sony ZA and the Zeiss Batis both operate focus by wire and their focus rings turn much more smoothly.

AF-operation of the lens is audible from the outside and if you record video with the built-in microphone the AF-drive produces some sound although not too annoying. As you pull focus, you’ll notice some focus breathing: the image becomes 5% more magnified when I adjusted the focus from infinity to 0.55m. This could be distracting when shooting videos. The Sony ZA and the Zeiss Batis increase their magnification by 6% and their focus is completely quiet.

Check prices on the Sigma 40mm f1.4 ART at Amazon, B&H, Adorama or WEX! Alternatively get yourself a copy of my In Camera book or treat me to a coffee! Thanks!
Pages: 1 2 3 4 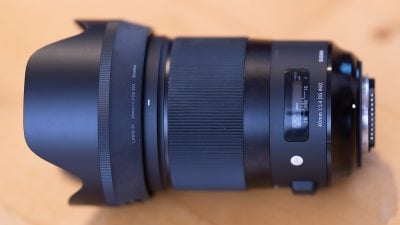 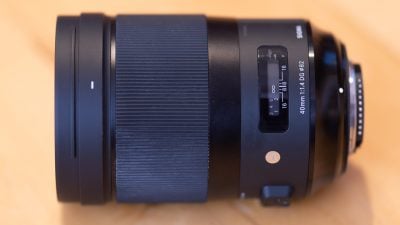 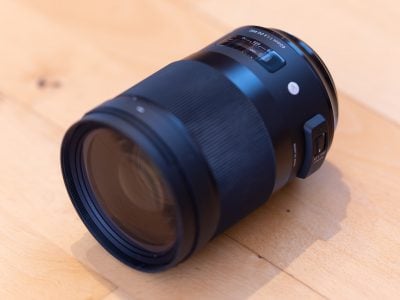