The Sigma 24-70mm f2.8 DG DN Art is a bright-aperture general-purpose zoom for Sony e-mount and Leica L-mount mirrorless cameras, that's a viable alternative to the original 24-70mm f2.8 lenses from Sony and Panasonic - not to mention Canon and Nikon, should Sigma develop RF and Z-mount versions. Although the lens comes at a much lower price Sigma has designed it well: The lens is sharp within the APS-C image-circle, has no longitudinal colour aberrations, shows little veiling glare in contra-light situations, and has a reliable autofocus. Unfortunately the Sigma becomes gradually softer at closer focusing distances right down to pretty mushy results at minimum object distance. This may make the lens miss out on our top award, but it still clearly earns a recommendation.

Check prices on the Sigma 24-70mm f2.8 DG DN Art at Amazon, B&H, Adorama, Wex or Calumet.de. Alternatively get yourself a copy of my In Camera book or treat me to a coffee! Thanks!

It’s important to understand that the Sigma 24-70mm f2.8 DG DN Art is a different optical design from Sigma’s 24-70mm f2.8 DG OS HSM Art from 2017 which is an original DSLR design available for Canon EF and Nikon F mounts and features optical image stabilization. The new lens instead relies on the mirrorless cameras to provide image stabilization. And – as is usual with lenses for mirrorless cameras – it puts away with the mechanically coupled focus ring with distance and dof scales and uses focus-by-wire instead. Plus it has a button which can be assigned various functions like AF-Lock. And you can get the mount changed between L-mount and E-mount (at a cost). This is a unique feature that no other manufacturer offers.

As a member of Sigma’s renown Art series the new Sigma 24-70mm f2.8 DG DN Art should perform on a very high level. I tested it on the 42MP Sony A7R II body and compare it against the Sony FE 24-70mm f2.8 GM and the Tamron 28-75mm f2.8 Di III. And as Sigma surely is working hard on offering its newest mirrorless lenses for Canon RF and Nikon Z mount too in the future I included comparisons with Nikon’s Z 24-70mm f2.8 S shot on the 45MP Nikon Z7 body. So if you like to know how Sigma’s brand new general purpose zoom performs, you’ve come to the right place! PS – if you’re interested in the other Art lenses designed for full-frame mirrorless cameras check out our in-depth Sigma 35mm f1.2 DG DN Art review plus the Sigma 14-24mm f2.8 DG DN Art review so far. 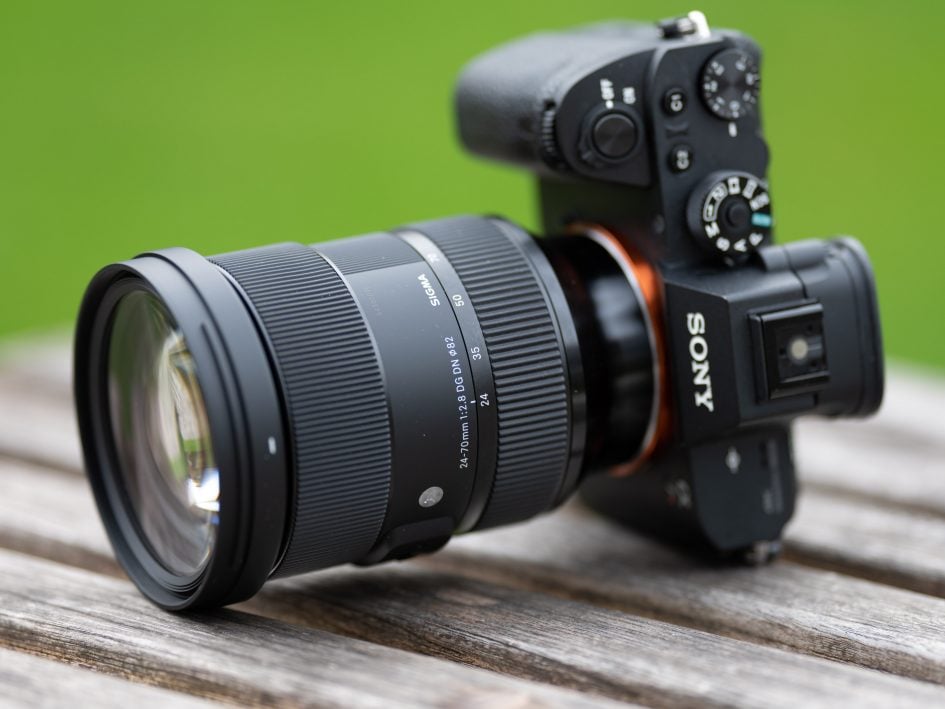 Optics: The Sigma has the most complex design in this comparison with 19 elements (including 8 special dispersion elements and 3 aspherical element) in 15 groups. That makes 30 glass/air surfaces where reflections can cause problems. Sigma employs nano coating to reduce reflections. Of the lenses in this comparison only the Nikon has a special coating on the front lens to repel water, dust, and dirt, and make for easier cleaning. [+] 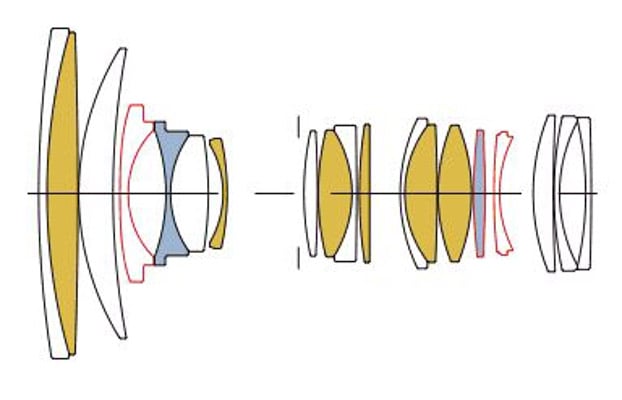 Filter-thread: 82mm just like the others except for the Tamron which uses cheaper 67mm filters. [0]

Image stabilization: None of the lenses in this comparison offers optical stabilization. But the full-frame mirrorless cameras from Sony, Nikon, and Panasonic provide built-in sensor-shift stabilization. [0]

Auto focus: Yes with built-in AF drive. Manual-focus override is by simply turning the dedicated focus ring at the front of the lens. Only the Panasonic has a different approach: you need to pull the focus ring back to engage manual focus. The focus ring has an almost linear gearing with a large throw between 230 and 330 degrees, depending on how fast you turn the focus ring. This allows for very precise manual focus and does not make smooth focus pulling for videographers too hard. As is usual with lenses for mirrorless cameras there are no distance or dof markings on the lens. Only the Nikon has an OLED display for distance, dof, aperture, and focal length. [+]

There’s a focus lock button on the lens which can also be assigned a different function depending on the camera body. That’s similar to what the Sony and Nikon offer. The Sigma also has a zoom lock switch arresting the lens at 24mm just like the Sony. You can unlock the zoom by simply turning the zoom ring. [+] 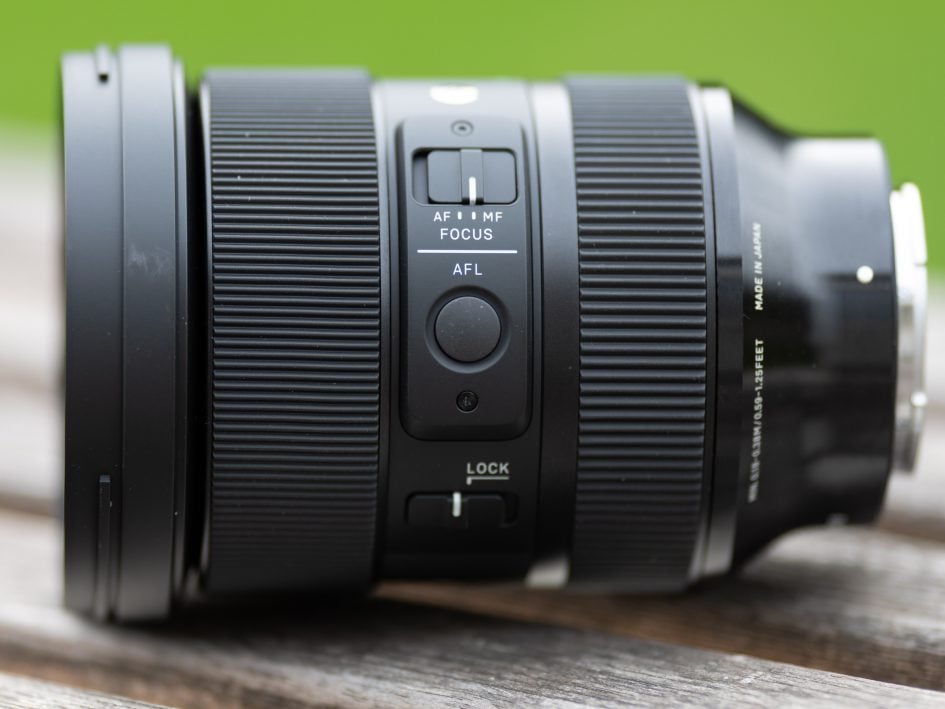 Lens profile: The lens comes with a lens profile for vignette-, CA- and distortion-compensation which can be controlled from the camera. Adobe’s RAW converter (as of version 12.1) does not recognize the profile completely: vignette is compensated as it was set in camera (but you cannot switch between off and auto in post-processing) while CA-compensation is always ON, distortion compensation always OFF. The latter is a pity as the lens shows strong mustache-like distortions at the short end which are not easily corrected. [+]

Covers full frame/FF or smaller. Same with the competition. [+]

The lens comes with a nice padded lens case plus strap, the lens hood is included, reversible for transport, and has a lock to prevent it from accidentally falling off. That’s the same as for the Sony. The Tamron comes only equipped with the lens hood. [+]

Aperture ring: No, just like the other lenses in this comparison, except for the Nikon which offers a multi-function control ring which can be assigned to operate the aperture or exposure compensation. [0]

Sealing: yes, a rubber grommet at the lens-mount plus further special weather-sealing throughout the construction. The other lenses in this comparison are similarly equipped except for the Tamron which only has a sealing at the lens-mount. [+] 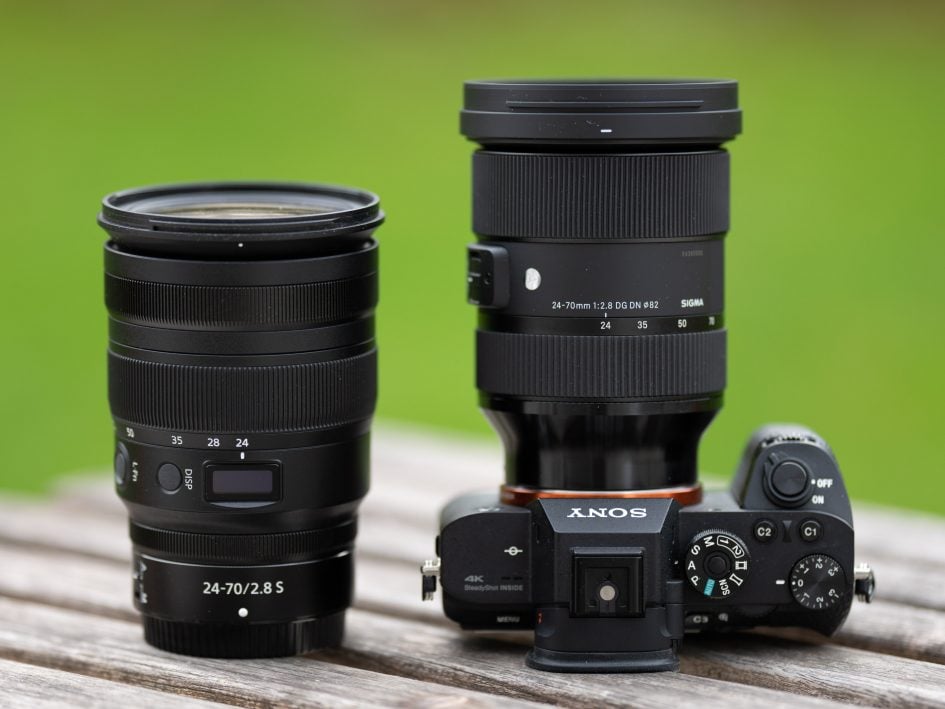 The market for full-frame 24-70mm zooms with a large f2.8 aperture is pretty crowded if you include optical designs that were developed for DSLRs and can be used via adapter on a mirrorless camera. But choices slim down once you focus on original mirrorless designs. Let’s start with those available for Sony E mount:

For L mount there’s only one alternative from Panasonic but in case Sigma manages in the future to adapt their new lens for Canon’s EOS R and Nikon’s Z system too I’ve included the native 24-70mm zoom lenses from both manufacturers. Most of these alternatives are from 2019:

Here is the angle of view that the new Sigma 24-70mm f2.8 DG DN Art covers with its 2.9x zoom (with distortion compensation):

Focus accuracy and repeatability is critical to consistently produce sharp shots. Repeatability (the accuracy of focus on the same subject after repeated focus-acquisition) of this lens at 70mm focal length is very good (measured 99.1% in Reikan FoCal) with no outliers over a series of 40 shots. There is no focus variation whether the lens focuses from a closer distance or from infinity and I didn’t detect any hunting. At 70mm focal length the lens focuses in around 0.7 sec from infinity to 0.76m (1:10 magnification), which is as fast as the Tamron 28-75mm f2.8 Di III but slower than the Nikon Z 24-70mm f2.8 S (on a Z7) at 0.5 sec.

The zoom ring turns through 65 degrees the other way around than Sony users are used to and has a 19mm wide rubber surface with a good grip. It turns pretty stiff and cannot be operated with one finger. The lens shows some zoom creep but the lock at 24mm can prevent that. The focus ring is 25mm wide and is located at the front of the lens. It moves super smooth and is so sensitive to touch that I often accidentally switched the camera to focus magnifier which can be annoying at times.

AF-operation of the new Sigma is inaudible from the outside or if you record video with the built-in microphone. And as you pull focus, you’ll notice no focus breathing at all: the image simply keeps its magnification at closer focusing distances. This should make videographers happy.

I also tested whether Sigma’s newest zoom lens allows you to change the focal length without altering its focus. This characteristic is called parfocal. I manually focused the lens at 70mm and then slowly zoomed back to 24mm checking focus on the way. The Sigma 24-70mm f2.8 DG DN Art kept focus perfectly. 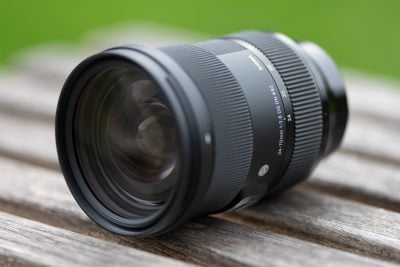 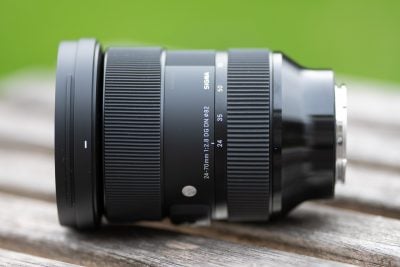 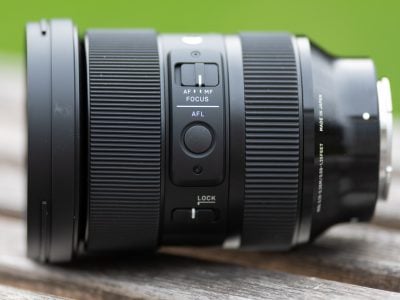