Sigma has finally come up with a modern mirrorless design for a super-telephoto lens with a 4x / 150-600mm zoom range: They managed to make it much lighter, optically better, and also cheaper than its predecessor - not a small feat! Optical performance is the best I've seen so far on a zoom lens reaching beyond 400mm focal length. But 3 out of 3 copies I tested could only reach these results when used in landscape orientation: As soon as I turned to portrait orientation, corner sharpness deteriorated significantly. A serious fault that Sigma hopefully can remedy. But other than that Sigma has designed a very compelling super-telephoto zoom which clearly earns a Highly Recommended - with the caveat that you need to find a good copy!

Check prices on the Sigma 150-600mm f5-6.3 DG DN OS at B&H, Adorama, WEX UK or Calumet.de. Alternatively get yourself a copy of my In Camera book or treat me to a coffee! Thanks!

Like its shorter sibling, Sigma’s new 150-600mm zoom lens features optical image stabilization (OS) – an essential feature for long telephoto lenses. It also is fully weather-sealed and comes with an Arca-Swiss style tripod interface. The lens is much lighter and shorter than its DSLR predecessor but at 2.2kg and 33cm length (incl. lens hood) it is still pretty big and heavy – extending another 10cm when zoomed in. Sigma has equipped the lens with a switch to either lock the zoom (at the short end) or provide more or less friction when zooming. This comes in handy when you prefer to push/pull the zoom instead of turning the zoom ring. And for those who like to shoot small objects the 150-600mm f5-6.3 DG DN OS allows for a maximum magnification of 1:2.5 at the short end.

The lens is priced at 1399 EUR / 1499 USD / 1199 GBP and so far only available for Sony E-mount and Leica L-mount. But I’m pretty sure Sigma is working on Z- and RF-mount versions of their lenses too.

Optics: The Sigma 150-600mm f5-6.3 DG DN OS is a pretty complex design with 24 elements in 16 groups including 4 special dispersion elements and 3 aspherical elements plus improved anti-reflective coating using nanotechnology. The other lenses in this comparison are of a similarly complex construction. There’s also fluorine coating at the front lens to repel water, dust, and dirt and make cleaning easier just like with both Tamron and the Sony lenses. [+]

Use with teleconverters: Yes, Sigma offers two teleconverters TC-1411 and TC-2011 which multiply focal length and maximum magnification by 1.4x resp. 2x – but only for L-mount. The lens probably does not work with Sony’s 1.4x and 2x teleconverters – only the Sony 200-600 certifiably works on Sony’s teleconverters. [+]

Autofocus: All lenses in this comparison offer autofocus with built-in focus drive. Manual-focus override is by simply turning the dedicated focus ring. The focus ring on the Sigma 150-600 DN has the usual variable gearing of an original mirrorless design which allows for very precise manual focus when turned slowly but cannot be switched to linear gearing. Which makes smooth focus pulling for videographers almost impossible. The Sigma 150-600 HSM Sports and the Tamron 150-600 has the usual direct coupling and linear gearing of a lens designed for DSLRs and the Sony 200-600 also offers linear response for MF. [+]

All lenses in this comparison cover full frame sensors or can equally be used on a cropped APS-C camera body. [+]

The Sigma 150-600 DN comes with a nice padded pouch plus strap and the reversible lens hood is included. It is fastened with a screw and has a rubberized front end to prevent dinks and scratches when the lens is set down on it. In addition to the usual front and back caps Sigma also added another soft lens protection that goes over the lens hood. The tripod collar (with strap attachment holes) is not removable although you can unfasten and detach the Arca-Swiss compatible foot. Sigma has also supplied an extra strap for the lens. The tripod collar can be rotated freely after loosening the locking knob and is notched every 90 degrees. The tripod ring feels very sturdy and well-engineered and rotates smoothly. Just don’t forget to fasten the locking knob after rotating. The Sony 200-600 and the both Tamrons come with a pouch and have the detachable tripod mount included but the Sony 200-600 doesn’t have an Arca-Swiss interface. [+]

Aperture ring and other control elements: None of the lenses in this comparison have an aperture ring. But all have a focus limiter: The Sigma 150-600 DN offering two positions: full|10m-inf|MOD-10m. Sigma also has equipped the lens with a L|T|S switch to either lock the zoom (at the short end) or provide more or less friction when zooming. At the “S” setting it’s easy to operate the zoom in push/pull mode – which is also helped by a slight groove at the front end which gives a better grip for your fingers. You can also select different modes for the optical image stabilization on all five lenses in this comparison. The Sigma 150-600 DN has an additional custom switch which influences how the lens stabilizes live view for composing (but not the actual image stabilization during the shot): It offers the setting off=standard, C1=maximum live view stabilization, C2=moderate live view stabilization. Mode C2 gives good feedback on how sloppy your handholding is. So it encourages better techniques to hold the lens stable – which makes work for the OS easier in the end and increases the chances of a sharp shot. And finally Sigma has equipped the lens with three AF Lock buttons which can also be assigned other functions (depending on camera). Some of the settings can be further customized via Sigma’s USB dock and Optimization Pro software – but that is only available for the L-mount version. [+]

Sealing: All lenses have a rubber grommet at the lens-mount plus further special weather-sealing throughout the construction. The Sigma 150-600 DN and both Tamrons also have a rubberized front-end that acts as a seal when the front lens-cap is tightly attached. Here’s a tip: snap the lens-cap on as usual then turn clock-wise until it sits tight. [+]

At a score of 0[-]/5[0]/11[+] the Sigma 150-600mm f5-6.3 DG DN OS offers a very good feature set including the unique option to get the lens-mount swapped (at a cost). It allows the use of teleconverters (at least for L-mount) thereby increasing maximum focal length to 1200mm, is easy to use as push/pull zoom and is thoroughly sealed against the elements. Plus it can reach magnifications of 1:2.5 at very usable working distances. But although much lighter than its DSLR sibling the lens still is heavy approaching 3kg with camera attached.

Focus accuracy and repeatability is critical to consistently produce sharp shots. Repeatability (the accuracy of focus on the same subject after repeated focus-acquisition) of the Sigma 150-600mm f5-6.3 DG DN OS under well-lit test conditions is good (measured 96.4% in Reikan FoCal) but shows some focus variation especially when focusing from further away. And there was one clearly misfocused shot over a series of 40 shots. At 200mm focal length the lens focuses in around 0.7 sec from infinity to 2.08m (1:10 magnification). In darker conditions (+5EV) I encountered a lot of hunting at focal lengths of 300mm and beyond.

The zoom ring turns through 120 degrees in the other direction than Sony users are used to and has a 54mm wide rubber surface with a good grip. It turns with quite some resistance (even with the zoom lock switch set to “S”) and cannot be operated with one finger. The lens shows zoom creep if you don’t set the lock switch to “L”.

The focus ring is 15mm wide and is located just in front of the tripod mount. It also has a rubberized surface, moves smoothly, and can easily be operated with one finger. AF-operation and image stabilization of the Sigma 150-600 DN is inaudible if you record video with the built-in microphone.

As you pull focus, you’ll notice some focus breathing: the image becomes a little more magnified at closer focusing distances. When I adjusted the focus from infinity to 2.08m on the Sigma 150-600 DN at 200mm focal length, I measured a 3% increase in magnification. At 600mm the effect is a bit stronger but still pretty inconspicuous.

I also tested whether Sigma’s newest zoom lens allows you to change the focal length without altering its focus. This characteristic is called parfocal. I focused the lens at 600mm and then slowly zoomed back checking focus on the way. The 150-600mm f5-6.3 DG DN OS is almost parfocal. It should be good enough for video recording but when shooting stills you should re-focus after changing focal length to achieve optimal sharpness.

To test the effectiveness of the OS image stabilization of the Sigma 150-600mm f5-6.3 DG DN OS, I did a series of 120 test-shots hand-held at 600mm focal length and tested with shutter speeds from 1/640 of a second down to 1/40 sec. I used the shots at 1/640 sec with OS=off as reference of how good my hand-holding was at the time of the test and Reikan FoCal did the chore of evaluating the sharpness of all shots.

My tests turned out to be a bit less conclusive than I’m used to seeing. But it looks like I was able to get almost 50% shots with usable central sharpness even at 1/40 sec. This would be a 3-4 stop advantage from the image stabilization of the lens at 600mm focal length. I also came across test shots where the OS led to images with less sharp outer image areas. Best keep in mind that holding/shooting a combo that weighs almost 2.9kg over an extended period of time is always stressful and leads to increased shake. So it’s better to shoot from a tripod, monopod or any support you can get for the lens when using focal lengths beyond 200mm. 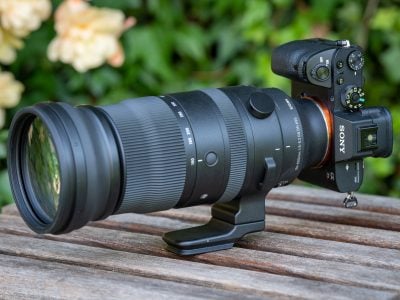 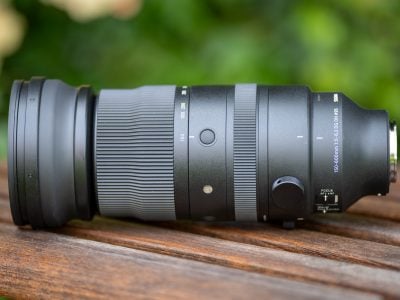