It performed very well regarding contrast, resolution, colour aberrations, and coma, producing very good image quality on a demanding 42MP Sony A7 R II body. And while the lens may not allow for standard front filters Sigma added a slot for gel filters at the rear. Its features also includes thorough weather sealing, a focus-lock button and the unique option to get the lens mount swapped (at a cost) between Sony’s E-mount and Leica’s L-mount.

What’s not to like? Well, extreme wide-angle fans may be disappointed the lens does not go wider than 14mm. Sony sets the expectation here with its 12-24mm f2.8 GM zoom. There is also a slight loss of contrast at 24mm f2.8 in the center from haloing/blooming. And autofocus is on the slow side.

Let’s have a closer look at how the Sigma 14-24mm f2.8 DG DN Art compares to some alternatives.

I’ve not yet written up my results for the Sony FE 12-24mm f4.0 G but I’ve already run all the usual tests. From that I can say the Sony is a good lens optically with a very sharp center. Plus it offers an 8 degree wider angle of view on the short end and is over 200g lighter and also smaller than the Sigma. But it is one stop less bright with its f4.0 focal ratio and it falls back behind the Sigma with regard to Bokeh, corner sharpness, coma, and resilience against flare and glare – although not by a large margin. So in the end the question is: Do you value an 8 degrees wider angle of view of the Sony FE 12-24mm f4.0 G higher than the constant f2.8 focal ratio and better optics of the Sigma 14-24mm f2.8 DG DN Art?

The Sigma 14-24mm f2.8 DG HSM Art is one of the best ultra-wide angle zoom lenses for Canon and Nikon DSLRs, and is also an option for Sony mirrorless owners via an adapter. It can produce very sharp and undistorted images but you have to stop down on the short end to reduce the effect of astigmatism and field curvature. Compared to its younger sibling designed specifically for the shorter flange distance of mirrorless cameras the Sigma HSM is a bigger and much heavier lens and lacks the features of a focus-lock button and a rear filter holder. Optically the Sigma HSM is slightly behind the Sigma DN in almost every aspect – but continues to be a very good lens nonetheless.

The Sony FE-12-24mm f2.8 GM is a very good lens and optically comparable to the Sigma 14-24mm f2.8 DG DN Art at twice the price. The feature set of both lenses is the same except for the Sony f2.8 GM reaching 12mm on the wide end offering an 8 degree wider angle of view. This is not a big difference but visible. The Sigma DN in turn is slimmer, shorter, and a bit less (front-)heavy than the Sony f2.8 GM. The decisive question in the end is: Are you prepared to pay twice the price over the Sigma 14-24mm f2.8 DG DN Art to get the 2mm shorter focal length on the wide end of the Sony FE 12-24mm f2.8 GM?

Strictly speaking, the Nikon Z 14-24mm f2.8 S is not an alternative as Sigma currently offers its lens in E-mount and L-mount only. But that’ll probably change in the future. Nikon’s new ultra-wide zoom lens is clearly the rightful successor to the legendary Nikon AF-S 14-24mm f2.8G as it is optically better in every aspect than the F-Nikkor from 2007 except for Bokeh. But compared to the newer design of the Sigma 14-24mm f2.8 DG DN Art differences in optical performance become minimal and both lenses are mostly neck-and-neck. Differences can be seen in harsh contra-light situations where the Nikon has the more effective coating and in Bokeh where the Sigma shows less double contours. The Nikon also focuses a lot faster than the Sigma but that is not exactly an apples-to-apples comparison when tested on two different cameras. The major difference between both lenses in the end is price: The Nikon is twice as expensive as the Sigma and although the Z-Nikkor can use standard filters and features a very useful multi-function ring plus a nice OLED display this makes the Sigma 14-24mm f2.8 DG DN Art look like a real bargain with a very good price/performance ratio.

The Sigma 14-24mm f2.8 DG DN Art demonstrates the virtues of optical designs which are optimized for the shorter flange distances of mirrorless cameras: it is optically better in almost every aspect than its DSLR sibling and loses more than 300g in weight. Its optical performance is almost flawless with a slight loss of contrast at 24mm f2.8 in the center from haloing/blooming. But that doesn’t prevent the lens coming Highly Recommended! Let’s hope that Sigma soon is able to offer their new lens with Nikon Z-mount and Canon RF-mount too. 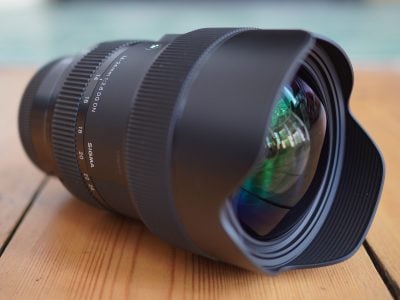 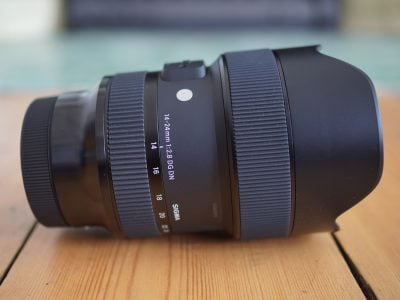 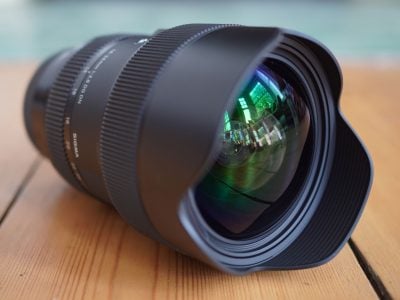