The Sigma 135mm f1.8 Art is a bright mid-length telephoto lens available in mounts for Canon, Nikon and Sigma DSLRs with full-frame sensors and can also be used with Sony E-Mount bodies using Sigma's MC-11 mount converter. I think this lens is Sigma's best yet in their Art line: extra sharp, with only minor color aberrations and a beautiful bokeh. In addition it's the only f1.8 135mm lens you can get for your Canon or Nikon DSLR. It might be on the large and heavy side, has no image stabilization, and it definitively is not cheap but all-in-all the Sigma 135mm f1.8 Art earns a Highly Recommended.

Check prices on the Sigma 135mm f1.8 ART at Amazon, B&H, Adorama, or Wex. Alternatively get yourself a copy of my In Camera book or treat me to a coffee! Thanks!

The Sigma 135mm f1.8 Art is a bright mid-length telephoto lens available in mounts for Canon, Nikon and Sigma DSLRs with full-frame sensors and can also be used with Sony E-Mount bodies using Sigma’s MC-11 mount converter. With an f1.8 focal ratio the new 135mm f1.8 Art becomes the brightest telephoto of its length available for Canon and Nikon DSLRs as the Mitakon Speedmaster 135mm f1.4 is still at pre-order only and limited to 100 units. So in terms of wide availability, the Sigma 135mm f1.8 Art is pretty unique.

Announced in February 2017, it’s has no predecessor in Sigma’s lens catalog. To be included into Sigma’s acclaimed Art series of top-notch lenses it should have very good optical performance and build quality. And as you would expect it is compatible with Sigma’s USB-dock to fine tune various characteristics of AF, plus if you change bodies, you can pay to have the mount swapped for your new system. This all comes at a price: 1400 USD / 1480 EUR is not exactly cheap but roughly in line e.g. with the Sigma 85/1.4 Art which is currently selling for 1200 EUR. 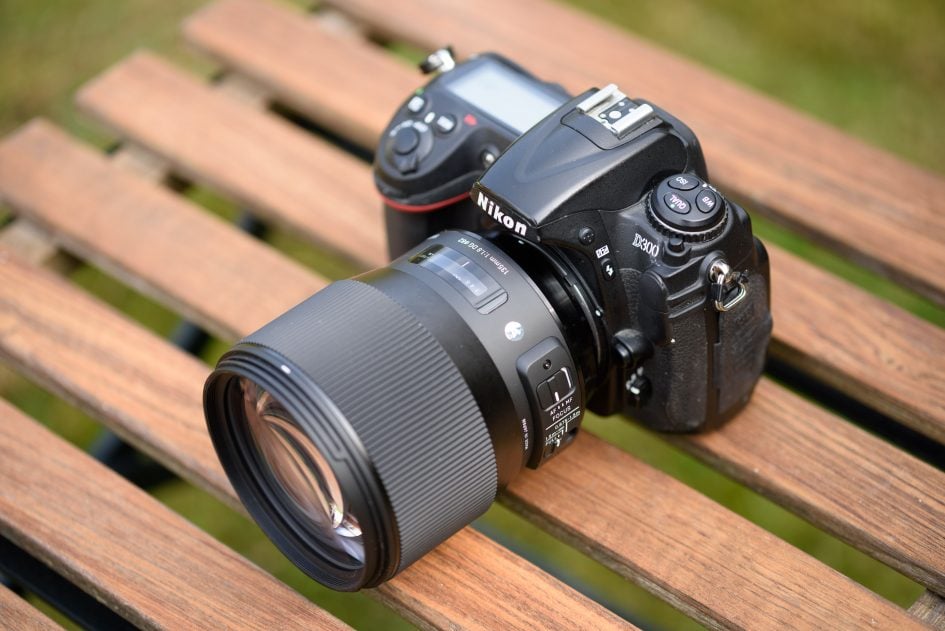 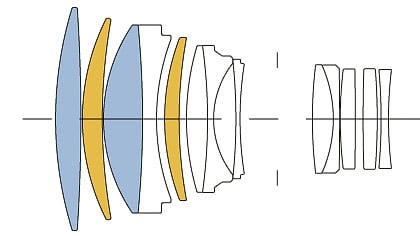 Optics: 13 elements in 10 groups vs. 14 elements in 9 groups for the Nikon. This is quite a complex design for a prime lens and contains 4 special dispersion elements but no aspheric lens elements. The Nikon and the Samyang also have no aspheric elements which should be good for the Bokeh as this avoids onion rings. [+]

Filter-thread: 82 mm, just like the Nikon. So you probably will need new filters. The Samyang is 77 mm, the professional standard. [0]

Image stabilization: No. That’s about par for the course on large aperture primes: Neither Nikon nor Samyang, Canon, or Zeiss offer stabilization, too. Unfortunately at a focal length of 135mm and with today’s high resolution sensors it’s pretty challenging to avoid blur/shake with hand-held shots. Use 1/250 sec to be on the safe(r) side or use a tripod. Tamron has proven that you can build f1.8 primes with image stabilization and not compromise image quality for it. And Sony offers at least body-based image stabilization when you mount the Sony/Zeiss Sonnar 135/1.8 ZA. [0]

Auto focus: HSM (Hyper Sonic Motor), so it also works on camera bodies which don’t have an AF-drive built in like Nikon’s D3x00/5×00. Manual-focus override is by simply turning the focus ring. Same with the Nikon. But the new Sigma allows you to alter focus fine-tuning at 4 distances with the USB-dock. Plus it has a limiter switch with three position: full / 1.5m – infinity / 0.875 – 1.5m which is also configurable with the USB-dock. The Samyang offers manual focus only. [+]

Comes with a nice padded lens case and a strap. The lens hood is included, reversible for transport, and the lens-caps are standard. When using the camera’s onboard flash the lens hood does not cast a shadow  at the bottom of the image. [+]

Distance information is relayed to the camera, so Nikon bodies and flashes can do all the advanced exposure-related stuff with this lens. Same for the Nikon. But the Samyang can’t do that although it has electrical contacts and communicate some EXIF data (like focal length and aperture) with the body. [+]

Aperture ring: no, as does the Nikon. The Samyang has an aperture ring. [0]

The score in the “features-department” is 1[-]/5[0]/7[+]. The major issue is its weight and size, but that seems to be the norm with modern large aperture lenses. 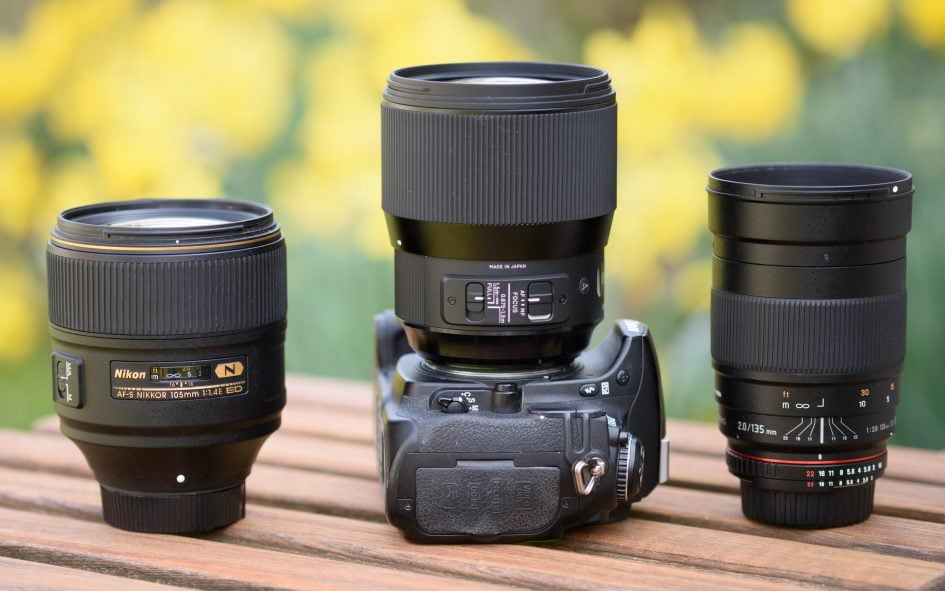 Which focal length do you need?

Focus accuracy and repeatability is critical to consistently produce sharp shots. Repeatability (the accuracy of focus on the same subject after repeated focus-acquisition) of this lens is pretty good (measured 96.7% in Reikan FoCal) with two slight outliers over a series of 40 shots. And there is a bit of performance variation whether the lens focuses from infinity or from a closer distance.

The lens focuses fast in around 0.5 sec from infinity to 1.35m which is faster than the Nikon 105/1.4E with 0.8 sec or the Sigma 85/1.4 Art at 0.7 sec. The focus ring has no slack/play between its movement and the focus-action and a throw of 150 degrees, which is very good for accurate manual focus wide open. The focus ring offers a good grip with a 41mm broad rubber surface and movement is smooth enough to be operated with a single finger. It turns the same way as Canon photogs are used to but that is the wrong way for Nikon users. AF-operation is barely audible from the outside and if you record video with the built-in microphone there’s only a “zip” at the beginning and the end of focus-movement and the AF-drive is very quiet. As you pull focus, you’ll clearly notice focus breathing: the image becomes more magnified at closer focusing distances. When I adjusted the focus from infinity to 1.35m on the Sigma, I measured a 18% increase in magnification which is pretty high and might not please videographers. In comparison the Samyang only increases magnification by 12% but the Nikon 105/1.4E is even more extreme: it magnifies the image by 28%.

Next check out my quality results or sample images.

Check prices at Amazon, B&H, Adorama, eBay or Wex. Alternatively get yourself a copy of my In Camera book, an official Cameralabs T-shirt or mug, or treat me to a coffee! Thanks!
Pages: 1 2 3 4 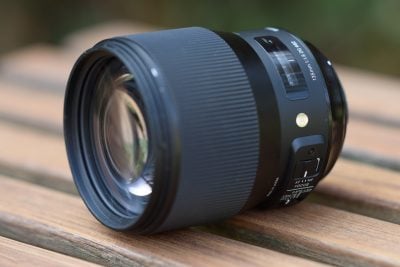 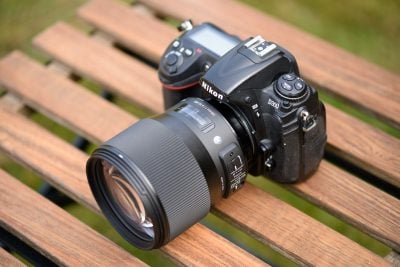