Sigma's new 12-24/4.0 zoom is a very competent lens: Its optical performance is up there with the reference 15-30mm zoom from Tamron, it has only minor distortions and finally offers a constant f4.0 focal ratio - although f2.8 would have been even nicer. Most importantly it goes down to 12mm focal length offering a whopping 122 degrees angle of view which is only surpassed by Canon's 11-24mm f4.0 lens at almost twice the price. So although the new Sigma is not exactly cheap it earns a Highly Recommended rating.

Check prices on the Sigma 12-24mm f4 ART at Amazon, B&H, Adorama, or Alternatively get yourself a copy of my In Camera book or treat me to a coffee! Thanks!

The Sigma 12-24mm f4.0 Art is a 2x super wide-angle full-frame zoom available in mounts for Canon, Nikon and Sigma DSLRs. Announced in February 2017, it’s already the 3rd generation 12-24mm model from Sigma. Sigma has done a complete optical redesign to get a constant f/4.0 focal ratio and improve performance fitting for inclusion into Sigma’s acclaimed Art series of top-notch lenses. Add the improved build quality, faster AF plus compatibility with Sigma’s USB-dock to fine tune various characteristics of AF, plus if you change bodies, use the MC-11 mount converter for Sony E-mount or pay to have the mount swapped for your new system and it’s clear Sigma also wants more money for the new lens: 1600 USD/EUR is a hefty mark-up of 100% over the current street price of the 2nd generation 12-24mm 4.5-5.6 II DG HSM.

To find out how the new Sigma 12-24mm f4.0 Art performs I tested it against my reference lens in this segment, the Tamron 15-30mm f2.8 VC, on the demanding D810 body. So if you’re shopping for a ultra wide-angle zoom, you’ve come to the right place! 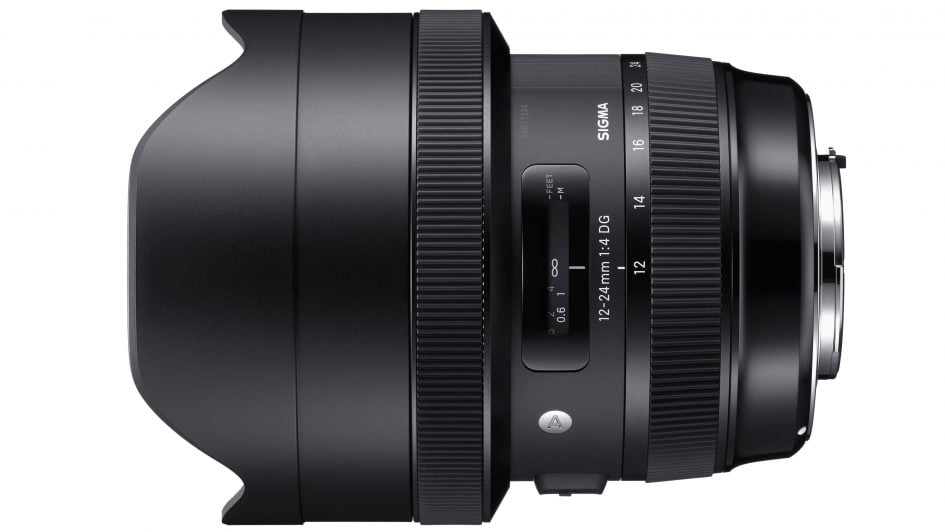 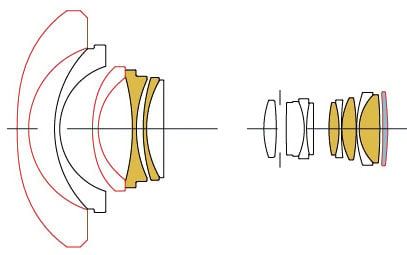 Optics: 16 elements in 11 groups which is a bit less than the 17/13 of the predecessor . The Tamron has 18 elements in 13 groups. The lens has six (extra) low dispersion and three aspherical elements. “Super-Multi-Layer” coating should reduce flare and ghosting. [+]

Filter-thread: None of the ultra wide-angle zooms from Sigma, Tamron, Nikon or Canon offer a filter-thread. Their bulbous front elements prevent that. So you need to get some non-standard mounting system and a new set of filters. [-]

Image Stabilization: No. Only the Tamron offers image stabilization in a wide-angle zoom. [0]

Auto Focus: HSM (Hyper Sonic Motor), so it also works on camera bodies which don’t have an AF-drive built in like Nikon’s D3x00/5×00. Manual-focus override is by simply turning the focus ring. Same with the competition. But the new Sigma allows you to alter focus fine-tuning at four focal lengths and four distances with the USB-dock. [+]

Comes with a nice padded lens case and a strap. The lens hood is built in and cannot be removed which is less practical for cleaning the bulbous front element. Another slight disadvantage is that the front lens-cap does not arrest in place when mounted: it does fit tighter than the the similar hoods from Nikon or Tamron but can work itself off when it rubs against your clothes. Samyang has shown with the 12mm f2.8 fisheye that you still can built a proper locking mechanism for this type of lens-cap. Samyang also has a detachable lens shade which makes it far easier to clean the outer parts of the front element. So here is something the other manufacturers should think about. Btw.: When you use the built-in flash the shadow of the lens hood is prominently visible at the bottom of the image at any focal length. [0]

Sealing: A rubber grommet at the lens-mount. [+]

The score in the “features-department” is 1[-]/6[0]/6[+]. This is quite good. Technically the only real downside is the missing filter-thread. And a bit surprising is the price: It’s twice as expensive as its predecessor and also costs 60% more than the Tamron which offers a constant f2.8 aperture plus image stabilization. But the lens is still cheaper than the alternatives from Nikon or Canon. Size and weight might come as a shock to someone used to smaller lenses. But it is par for the course for a modern ultra wide-angle zoom.

Here is the angle of view that the Sigma covers with its 2x zoom:

Following is the coverage of the Tamron 15-30mm zoom. This is what the missing 3mm at the short end and the additional 6mm at the long end look like: 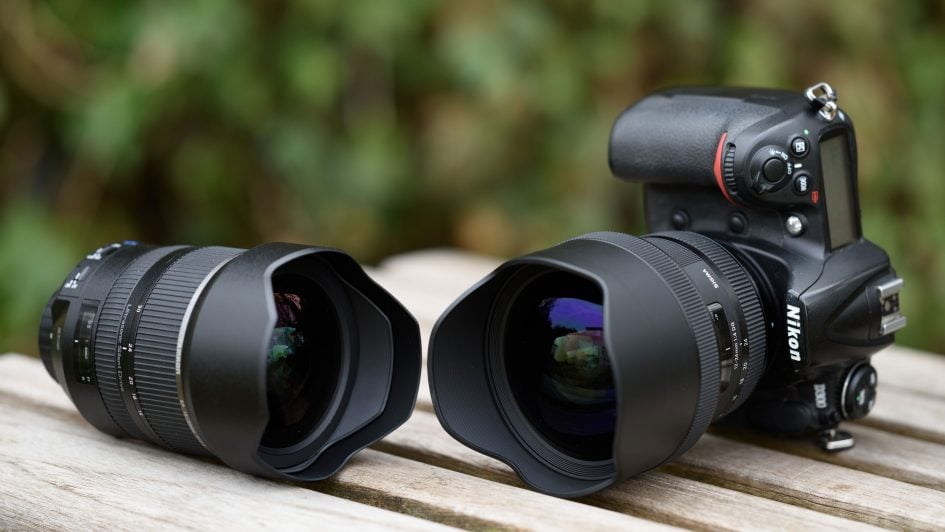 Focus accuracy and repeatability is critical to consistently produce sharp shots. Repeatability (the accuracy of focus on the same subject after repeated focus-acquisition) of this lens is very good (measured 99.1% in Reikan FoCal) with no outliers over a series of 40 shots under strictly controlled test conditions. And there is almost no performance variation whether the lens focuses from infinity or from a closer distance. Under real-life shooting conditions the lens behaved a bit dicey at the short end with target distances of 10m and beyond:  In a number of cases the lens focused too close in phase-detect AF which did not immediately show up in the center of the image because of the large dof at 12mm and f4.0. But the outer areas became visibly less sharp in these cases. As in-camera AF fine-tuning was perfect for the longer focal lengths I had to rely on the USB-dock to make specific adjustments for 12mm. I’d rather wish that the lens came properly adjusted right out of the box. 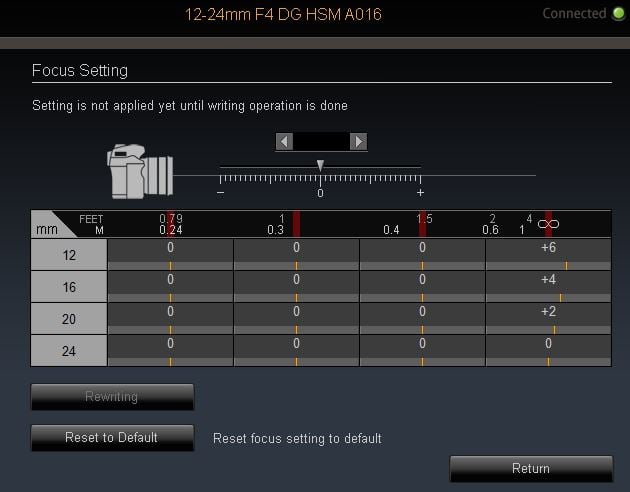 At 24mm focal length the lens focuses without hunting in around 0.6 sec from infinity to 0.24m, which is quite fast. The focus ring has no slack/play between its movement and the focus-action and a throw of 130 degrees which is more than enough for manual focus at f4.0. Its rubberized surface is 12mm wide and can be turned with one finger. The zoom ring turns through 80 degrees and has a 13mm wide rubber surface which is pretty small for the most important ring on this lens. It’s also quite stiff, at least fresh from the factory. Both rings turn in the same direction as Canon users are used to and Sigma did also put the focus ring at the front and the zoom ring very close to the camera body. So the handling is identical to e.g. the Canon EF 11-24mm 4.0 L USM. But this will not please Nikon users as they expect both rings to turn the other way around. Personally I also would have preferred the zoom ring to be further away from the body: I occasionally got my thumb stuck between the zoom ring and the flash protruding from the body when turning the zoom ring from 24mm towards shorter focal lengths. There is simply not much clearance between the camera body and the zoom ring.

AF-operation is pretty quiet from the outside, and if you record video with the built-in microphone the AF-drive produces a slight hiss but there are no clicks at the start or stop of focus-movements. Very good!

As you pull focus, you’ll notice some focus breathing: the image becomes less magnified at closer focusing distances. When I adjusted the focus from infinity to 0.24m, I measured a 6% decrease in magnification at 24mm focal length which is pretty little and should not prove distracting when shooting video. Next check out my quality results, sample images or head to my verdict!

Check prices on the Sigma 12-24mm f4 ART at Amazon, B&H, Adorama, or Alternatively get yourself a copy of my In Camera book or treat me to a coffee! Thanks! 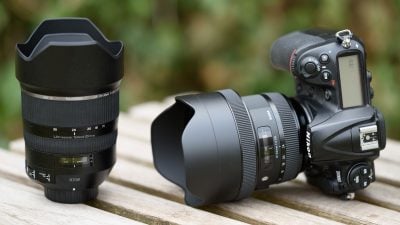 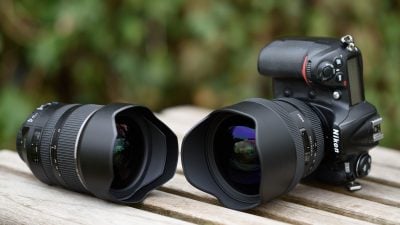