The Sigma 105mm f2.8 DG DN Macro Art is the first macro lens for Sigma’s DN-series of lenses designed specifically for mirrorless cameras with Sony E-mount and Leica L-mount. The excellent performance makes it a perfect match for high resolution full-frame mirrorless cameras with E-mount or L-mount. It produces extremely sharp images devoid of color aberrations and has a very good feature set - including the option to use teleconverters. It may be missing the optical image stabilization of Sony's FE 90mm f2.8 G OSS Macro but then for professional macro work you'd probably put it on a tripod anyway. All-in-all the 105mm f2.8 DG DN Macro Art clearly earns a Highly Recommended! Let's hope that Sigma soon is able to offer their new lens with Nikon Z-mount and Canon RF-mount too.

Check prices on the Sigma 105mm f2.8 DG DN Macro Art at B&H, WEX, or Calumet.de! Alternatively get yourself a copy of my In Camera book or treat me to a coffee! Thanks!

The Sigma 105mm f2.8 DG DN Macro Art is the first macro lens for Sigma’s DN-series of lenses designed specifically for mirrorless cameras with Sony E-mount and Leica L-mount. A popular focal length for macro photography and general-purpose use, it features the same f2.8 focal ratio as Sigma’s 105mm f2.8 EX DG OS HSM Macro from 2011 which was designed for DSLRs. Sigma has however developed a completely new optical design for their newest macro lens and also added some nice features like a de-clickable aperture ring and an additional button which can be assigned AF-lock or other functions.

Use with teleconverters: Yes, Sigma offers two teleconverters TC-1411 and TC-2011 which multiply focal length and maximum magnification by 1.4x resp. 2x – but only for L-mount. From what I can see it seems that the Sigma Art has enough clearance on the mount-side that it probably could be used with Sony’s teleconverters for E-mount (see below). But I couldn’t test my assumption so you better try before you buy. The Sony FE 90mm f2.8 G OSS Macro cannot be used with teleconverters. [+]

Auto focus: Built-in AF drive with hypersonic motor. Manual-focus override is by simply turning the dedicated focus ring – same as with the Sigma HSM. The focus ring of the Sigma Art has a variable gearing (like many lenses designed for mirrorless cameras) which allows for very precise manual focus when turned slowly which is a boon when shooting macro photos. But it cannot be switched to linear gearing which makes smooth focus pulling for videographers pretty hard. The Sony has a dual MF mechanism: When you leave the focus-ring in the front position the lens has the usual focus-by-wire functionality with variable gearing for very precise focusing. But when you full the focus ring back it switches to linear gearing which allows for faster focus action. The Sigma HSM has the usual linear mechanical coupling that is typical for lenses designed for DSLRs – and shows the focus distance in a small window. The Sigma Art and the Sony also have an extra button on the lens which can be assigned many different functions e.g. AF-lock. All three lenses have a focus limiter: the Sigma Art offering three position as you can see below. [+]

Aperture: The lens has an aperture ring with 1/3 stop clicks. There is a switch to turn the clicks off so that the aperture can be operated continuously, smoothly, and noise-free. It also comes with a dedicated lock switch to prevent accidental shifting between aperture control from the ring or the camera. The Sony and Sigma HSM have no aperture ring. Focusing does not change the aperture-value of the lens, so even at a magnification of 1:1 the lens still shows f2.8 although it clearly darkens by 2 EV. That means that the effective aperture of the lens is f2.8-f22 at infinity and f5.6-f44 at minimum object distance. [+]

Lens profile: The lens comes with a lens profile for vignette-, CA- and distortion-compensation which can be controlled from the camera. That’s the same as with the Sony. With the Sigma HSM you have to rely on the profiles supplied e.g. in Adobe’s software. [+]

Covers full frame/FX or smaller. Same with the Sony and Sigma HSM. [+]

The lens comes with a padded pouch but no straps. The plastic lens hood is included and is reversible for transport. [+]

Sealing: yes, a rubber grommet at the lens-mount plus further special weather-sealing throughout the construction, just like the Sony. The Sigma HSM has no special weather sealing. [+]

The score in the “features-department” is 0[-]/4[0]/12[+]. The new Sigma 105mm f2.8 DG DN Macro Art offers a nice feature set and the unique option to get the lens-mount swapped. Plus it allows the use of teleconverters (at least for L-mount) thereby increasing maximum magnification to 2x. So there’s hardly anything to complain about – on paper.

Focus accuracy and repeatability is critical to consistently produce sharp shots. Repeatability (the accuracy of focus on the same subject after repeated focus-acquisition) of this lens is pretty good (measured 98.8% in Reikan FoCal) with no outliers over a series of 40 shots. There is almost no focus variation whether the lens focuses from a closer distance or from infinity and I detected very little hunting. The lens focuses in around 0.7 sec from infinity to 1.24m (1:10 magnification), which is OK.

AF-operation of the new lens in photo-mode can be heard from the outside and if you record video with the built-in microphone there are also situations where the drive emits a low buzz.

As you pull focus, you’ll notice quite some focus breathing: the image became 12% less magnified when I adjusted focus from infinity to 1.24m. This is very visible and could be distracting when shooting videos.

There was also a slightly annoying glitch with my copy of the lens: when reversing direction on the focus ring the lens occasionally just went a few ticks further in the old direction before turning around. 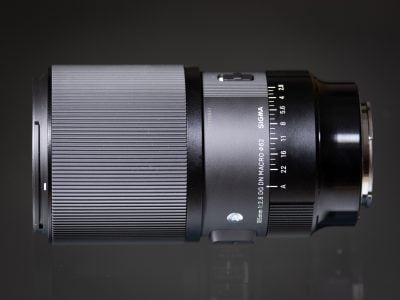 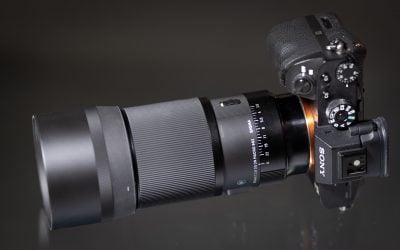