The Sigma 100-400mm DG DN becomes one of the cheapest ways to enjoy the reach of 400mm on a full-frame mirrorless camera, making it ideal for wildlife or sports photographers on a budget. Available in Sony e and L-mount versions, it’s dust and splash resistant, focuses fairly swiftly and quietly, has optical stabilisation and supports an optional tripod collar accessory that was not available on the earlier DSLR version of the lens. In my tests it roughly matched the resolution and detail of the Sony 100-400mm G Master zoom which costs around two and a half times more. That’s not to say it renders the Sony redundant though: the G Master fights back with an aperture that’s one third of a stop brighter throughout the range, closer focusing especially at 400mm, higher contrast, better stabilisation, more confident focusing (making it more suitable for subjects in fast motion), a smoother manual focus ring, and comes supplied with a tripod collar and foot as standard. Demanding photographers on a higher budget will still aspire to the G Master zoom, but the Sigma makes the same range and detail affordable to many more and is an ideal match for entry to mid-range bodies. So like the DG DN lenses that preceded it, Sigma’s 100-400mm is a compelling option delivering respectable quality at a relatively low price and deservedly earns a recommendation. Let’s hope RF and Z-mount versions of all DG DN models follow sooner rather than later.

Check prices on the Sigma 100-400mm DG DN at B&H, Amazon, Adorama, WEX or Calumet.de. Alternatively get yourself a copy of my In Camera book or treat me to a coffee! Thanks!

The Sigma 100-400mm f5-6.3 DG DN OS is a relatively affordable telephoto zoom designed for full-frame mirrorless cameras and available in Sony e and L-mount versions. No word yet on Canon RF or Nikon Z versions but Sigma’s monitoring demand – so start demanding! In the meantime, the e and L-mount versions will cost around $900 dollars or pounds, making it one of the cheapest ways to reach 400mm on full-frame and the lens should be available from mid-July 2020.

Sigma sent me a pre-production lens to try out before the official announcement and in the video above I’ll show you what it can do when mounted on a Sony A7r III body; Sigma described the image quality as final, but I’ll follow-up with a full test on a final sample model soon.

If you’re getting a sense of deja-vu, don’t be alarmed. Sigma launched a 100-400mm f5-6.3 zoom for DSLRs back in 2017 which you can of course adapt onto a mirrorless body if desired. It too aimed to be one of the most affordable ways to reach 400mm on full-frame, and currently costs about $100 less than the mirrorless version, albeit without an adapter.

Above: At first glance the new version looks a lot like the old one, and the similarities go more than skin-deep, but there are a number of key differences and Sigma states the DG DN version is indeed a new design, made specifically for mirrorless. The 86mm diameter is the same as the older DSLR model, but at just under 200mm in length, it’s actually 15mm longer – but if you were to mount the DSLR model via an adapter to a mirrorless camera, it would become a little longer still.

Above: For another comparison, here’s Sony’s FE 100-400mm f4.5-5.6 G Master, a higher-end model costing around two and a half times more – I’ll show you how the quality compares later. In terms of size, the Sony’s a little wider and longer, but side-by-side they’re roughly similar. The Sigma has a smaller 67mm filter thread compared to 77mm on the Sony and both are supplied with lens hoods.

Above: At 1135g, the Sigma on the left is 260g lighter than the Sony on the right and you can feel a small difference in your hands, but remember the Sony has a maximum aperture that’s one third of a stop brighter throughout the range. Both lenses are described as splash and dust resistant, and both have rubber rings on their lens mounts.

Above: The Sigma’s focusing ring is closest to the lens mount and turns smoothly, albeit not as silkily as the Sony. A locking switch can hold the barrel at the shortest 100mm focal length, and at the longest, the barrel extends by 76mm.

Above: It’s also possible to adjust the zoom by simply pulling the end of the barrel in and out, which you may prefer to twisting the zoom ring. Sigma often highlights this out as a benefit, although to be fair you can do it with some other lenses too.

Above: Here’s the Sony FE 100-400mm from the side. Its manual focusing ring is positioned at the end of the barrel and again feels much smoother than the Sigma. Zooming from 100-400mm extends the barrel by 80mm, and while there’s no locking switch, there is an adjustable clutch ring that can greatly stiffen the zoom mechanism to prevent unwanted movement. In terms of aperture changes, the Sony’s maximum f4.5 is available between 100 and 116mm, before closing to f5 between 116 and 164mm, then reducing to f5.6 between 164 and 400mm. So the Sony maintains a one third of a stop advantage over the Sigma roughly throughout its range.

Above: On the side of the Sigma barrel is a customisable AF lock button and switches to limit the focus and adjust the optical stabilisation mode. Note the rubber ring around the barrel on the right side – this covers a groove to accommodate an optional tripod collar and foot accessory – something that was sorely absent on the older DSLR version of the lens.

Above: Sony’s controls are similar with switches to limit the focus – this time between 3m and infinity – along with the optical stabilisation modes; there’s also three customisable focus lock buttons between the focus and zoom rings. Note the clutch ring I mentioned earlier, along with a tripod collar and foot, supplied as standard; the foot can be unclipped from the collar to save weight.

Above: The Sigma 100-400 DG DN employs 22 elements in 16 groups, just one more element than the DSLR version. The closest focusing distance is 1.12m at 100mm increasing to 1.6m at 400mm, compared to 0.98m for the Sony throughout its focal range; this allows the Sony to deliver much greater magnification on close-ups.

Above: For example, here’s a shot from about 1.2m taken with the Sigma which could only keep it in focus at a focal length up to 116mm.

Above: Now here’s the Sony from the same distance, staying focused even up to 400mm where the difference is dramatic.

Above: It’s possible to achieve very shallow depth of field effects with telephoto lenses, especially if you’re close to the main subject. Here’s that decoration again from about 1.2m where, at 100mm f5, the fairy lights are rendered into attractive, soft-edged blobs. As you close the aperture down, the nine-blade system keeps the bokeh blobs fairy circular and there’s little to no onion-ringing. For comparison, here’s the Sigma next to the Sony, both at 100mm and their maximum apertures: f5 for the Sigma on the left and f4.5 for the Sony on the right. Despite the slightly larger aperture, the blobs on the Sony are roughly similar in size here, although they have slightly sharper edges. There’s no right or wrong here, only personal preference, although as you already know, the Sony can maintain its close focusing distance throughout the focal range, allowing much greater macro magnification than the Sigma.

Above: Now for autofocus and I’m pleased to report the Sigma 100-400mm supports face and eye detection on the Sony bodies and here it is at 100mm f5 working with the A7r III’s AF system to continuously track my eye as I move around.

Next here’s the Sigma at 400mm f6.3, refocusing between the clothes line and the plant in the distance using the central AF area and single AF. In my video review, you can see the Sony body employing contrast detect autofocus to help it nail the distance which it does fairly swiftly. In comparison, the Sony lens at 400mm f5.6 looked a little faster and more confident to me, with less of the contrast-detect hunting that you could see from the Sigma. This may be a pre-production or firmware issue with the Sigma, but from my initial tests, the Sony 100-400mm focused a little faster and more confidently at longer focal lengths which made it preferable when photographing birds in flight or other fast subjects.

Quality – Now for quality and here’s a scene I shot at 100mm using both lenses moments apart at all apertures. Starting with the Sigma 100-400mm at 100mm f5, it’s crisp in the middle and in the far corners. Closing-down the aperture boosts the crispness a little, peaking at f8 to f11, but it’s still very good wide-open.

Above: This is an impressive result for the lens, but even more so when compared side-by-side to the Sony FE 100-400mm. Here’s the Sigma on the left at 100mm f5 and the Sony on the right at 100mm f4.5 and to me they’re delivering essentially the same detail in the middle, and in the corners too.

Above: At the other end of the scale, here’s the Sigma 100-400mm at 400mm f6.3 where again there’s a high degree of detail in the middle and in the corners for pixel-peepers to examine. Closing the aperture gradually down gives a very small boost in contrast and detail, but again it’s performing very well wide-open.

Above: Here’s the Sigma on the left and the Sony on the right again, this time both at 400mm f6.3 and again both showing very similar levels of detail. It’s impressive the Sigma can keep up with the Sony in terms of resolution given the price difference.

Check prices on the Sigma 100-400mm DG DN at B&H, Amazon, Adorama, WEX or Calumet.de. Alternatively get yourself a copy of my In Camera book or treat me to a coffee! Thanks!
Pages: 1 2 3 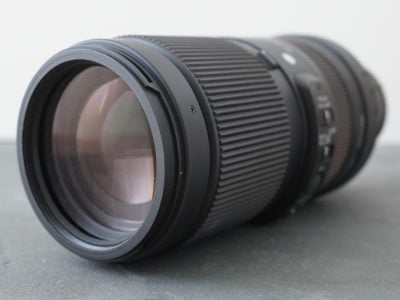 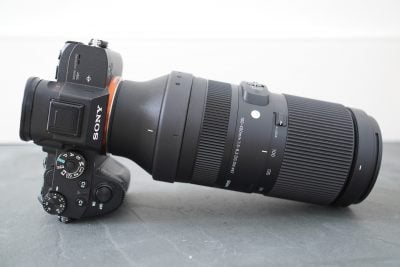