The Samyang 24/1.4 ED is the cheapest alternative to get a 24/1.4 full-frame lens. But don't forget that you give up the support of autofocus for the discount. And exact focus is critical for achieving optimal sharpness even at only 24mm focal length and the resulting large(r) depth of field. Plus you have to cope with limited lens to body communication on the Nikon version or none at all on the other versions which cripples some of the more advanced exposure related functions of modern bodies. Is that really worth it? Optically the Samyang is not bad: It has the least coma of all three lenses and produces quite soft Bokeh. At close range its resolution can keep up with the other lenses although at a lower contrast wide open especially in the center. But at infinity it is less sharp than the Sigma or the Nikon, so if you're a landscape or even architectural shooter, be warned. It also shows the strongest distortions of the trio. The lens has its merits but I'd hesitate to recommend it. The Sigma 24mm f1.4 ART is simply a better alternative and worth spending the extra on.

Check prices on the Samyang 24mm f1.4 at Amazon, B&H, Adorama, or Wex. Alternatively get yourself a copy of my In Camera book or treat me to a coffee! Thanks!

The Samyang 24mm f1.4 ED AS IF UMC is a wide-angle full-frame lens available for Nikon, Canon, Sony E-mount, and MFT DSLRs. Announced in January 2012, it’s the widest member of Samyang’s line-up of f1.4 full-frame primes comprising 24mm, 35mm, 50mm, and 85mm f1.4 models. Samyang lenses are also sold under the Rokinon and Walimex brand. Large aperture 24mm lenses are quite attractive additions to interchangeable lens bodies of APS-C/DX or FF/FX format: On the former bodies they are roughly equivalent in angle-of-view and depth-of-field to a 35mm f2.0 lens (on a full-frame body) which is quite attractive for reportage / street photography as it’s fast and gives some background isolation. On a full-frame body a 24/1.4 lens would be the widest f1.4 lens from Samyang that you can get, giving a clearly larger field-of-view than 35mm or 28mm lenses. It lets you capture more of architecture or landscapes plus lets you shoot longer under diminishing light and isolates closer subjects at least a bit from the background. Only Sigma offers a wider full-frame f1.4 lens: their Sigma AF 20/1.4 DG HSM “Art” (see my Sigma 20/1.4 Art review). 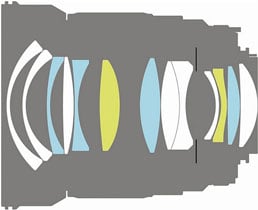 Image Stabilization: No 24mm prime lens offers optical stabilization except for Canon’s EF 24mm f2.8 IS USM. And with the small magnification at a focal length of 24mm it is no big loss. Still: shooting dim interiors or landscapes in fading light hand-held can prove quite a challenge without stabilization. [0]

Auto Focus: No, the lens is manual focus only. All the competition offers auto-focus. [-]

Comes with a simple soft pouch. The lens hood is included, reversible for transport, and the lens-caps are similar to Nikon’s but the front cap is a bit slippery to pinch. The Sigma comes with a nicer well-padded case. [0]

Distance information is not relayed to the camera, the lens delivers a value of 3m regardless of the distance you choose. This disables some of the advanced exposure-related stuff e.g. a Nikon body can do although the lens does have electrical contacts and communicates some EXIF data with the body – at least in the Nikon version. The versions for Canon, Sony and MFT bodies have no contacts at all so cannot communicate anything to the body. The competing lenses from Sigma, Nikon and Canon relay subject-to-camera-distance and all the other EXIF information. [0]

Aperture ring: Yes, so you can control aperture directly from the lens. In the Nikon version you can also control the aperture from the camera by setting the ring to f22 but unfortunately there is no lock to prevent accidental movement. With the other versions of this lens you have no choice but to control the aperture from the ring. It clicks at half stops except between f1.4/f2.0 and between f16/f22. The respective lenses from Canon, Sigma, and Nikon don’t offer an aperture ring. [+] for Nikon version, [-] for all other versions.

– The prime alternative is Sigma’s 24/1.4 Art that sells for around 750 EUR and performed very convincingly (see my Sigma 24/1.4 Art review) earning a Highly Recommended.

The lens is made in Korea and the general impression of build quality is solid but nothing in the class of the Sigma. The lens hood fits tightly and the focus ring has no slack/play between its movement and the focus-action. It has a throw of around 110 degrees, which is good for accurate focus wide open. The focus ring is 30mm wide and easy to grip and moves smoothly. But the lens has no weather sealing and its aperture blades produce only 8 diffraction spikes / rays whereas lenses with 7 or 9 aperture blades produce 14 resp. 18 spikes / rays.