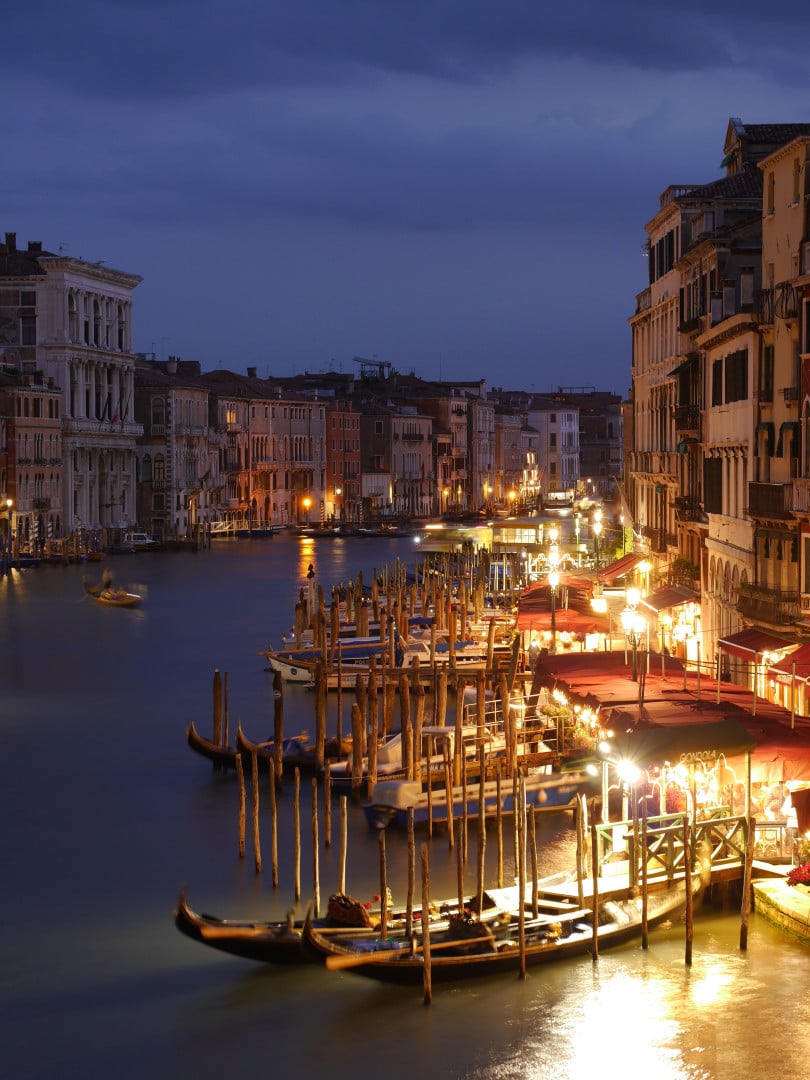 But first some history. There was a floating crossing here as far back as the 12th Century, but the first solid bridge came in the mid 1200’s, a wooden structure with inclined ramps meeting in the middle. As the nearby Rialto market grew, the bridge took its name, and in the early 1400’s, rows of shops were built on either side. The wooden bridge however suffered from damage by fire and even collapsed twice under the weight of crowds. A stone replacement was proposed in the early 1500’s with various styles, but eventually the ramps with shops on the sides of the original bridge won the day, and the Rialto as we know it now was completed in 1592.

The Rialto Bridge is of course now one of the icons of Venice, visited by every tourist. I’ve only been there once before, back in 2001 when I took a very average photo with a 3 Megapixel Sony point-and-shoot, then the pinnacle of digital technology. Those photos of Venice have haunted me ever since and I vowed to return to try and do the views justice. So as part of a driving tour around Europe, we made Venice one of our stops, staying in nearby Venezia Mestre and catching the regular bus into the city.

We were in Venice for two nights and I spent a large portion of both on the Rialto Bridge. I arrived here late on the first night when the sky was dark, but fired-off a number of shots I was quite happy with. All were long exposures taken from a folded-down tripod I had balanced on the sloping ledge of the bridge. This avoided anyone knocking it as they walked past, but obviously I had to be careful it didn’t slip off into the canal below – so I loosely held my camera strap throughout the shots.

I was shooting with the Panasonic Lumix G6 mirrorless camera and started off with some wide angle lenses to capture the whole scene. But with a plain sky occupying a large portion of the frame, I decided to switch to something tighter and fitted an Olympus 45mm f1.8 lens for a short telephoto view equivalent to 90mm. With my camera turned to the portrait aspect and recomposed to concentrate on one side, I was able to capture finer details on the magnificent buildings and the curve of the canal without the shot suffering from a vast expanse of dark sky and equally dark water.

I put the camera into Manual mode and set the aperture to f5.6 (which I knew delivered the best results with this lens) and the sensitivity to the lowest ISO value of 160 for the cleanest image. After this it was simply a matter of experimenting with different shutter speeds until the exposure looked good; I found five or six seconds worked well, triggered by the self-timer to avoid camera shake.

I then experimented with neutral density filters, greatly reducing the incoming light and forcing the camera to use longer exposures of around one minute to compensate. This smoothed out ripples on the water’s surface, lending it a mysterious steam-like appearance, while also allowing the lights on passing boats to leave long trails.

I was pretty sure I’d got the job done when I returned home that evening, but upon closer inspection my shots with the ND filters had suffered from internal reflections on bright lights shining directly at the camera. I still had the filter-less versions but was sure the scene could look better with some colour in the sky.

So I returned the following night a couple of hours earlier and basically took the same shot again and again over about three hours using different exposures. It was wonderful to stand there and soak up the scene as the light subtly changed and countless tourists passed by. It was even more wonderful not to have any officials have a go at me. Had this been in London and I’d dared to extend my tripod at a tourist location I’d have been moved on or arrested in moments. For this, Venice, Grazie mille, molto gentile.

At one point someone did come and have a word, but he was a Ukranian photographer who looked like Father Christmas and insisted on showing me his collection of hundreds of multiple exposures he’d taken around the city, superimposing various profiles of his wife over iconic scenes. He assured me ‘moooltipoool exposures’ were the future as I continued to trigger my shutter at regular intervals.

As the sky eventually lost all colour I called it a day and returned to pick my favourite shot from the evening. This ended up being very tough. I liked the ones which captured some blue in the sky, yet were dark enough for the lights to show up, but I’d taken these at a variety of exposure times and aperture settings. The long exposures successfully smoothed the water’s surface and trailed the boat lamps while the accompanying small apertures had rendered the pontoon lights into tiny starbursts. Surely these were technically the most impressive, but something, beyond some softness from diffraction, didn’t look right to me. The scene was already sufficiently unreal, it didn’t need more slapped on thanks to special techniques, and I found the trailed boat lamps on the water actually distracted from the buildings.

So after much deliberation and to my surprise I ended up preferring a much more normal exposure for the image I’m sharing here: 3.2 seconds at f5.6 and 160 ISO.  I know it doesn’t have the smooth surface of a really long exposure, nor the trailed boat lamps or any starburst effects, but it ultimately best captures the scene I remember seeing in person. For me that’s what photography is about: capturing the essence of a place with an honest portrayal which immediately takes you back to the moment you were there in person. Every time I look at this photo, I’m reminded of those three hours I spent soaking up the atmosphere of this wonderful city. Venezia, ti amo!

PS – the Lumix G6 also offers a panorama feature which automatically stitches multiple images into one. I thought I’d try it out on the view a little earlier in the evening, and here’s what it generated.