The Polaroid Now is an instant camera that delivers large square prints with minimal effort. The camera’s available in a variety of finishes including a Keith Haring edition adorned with the pop artist’s iconic graphics and the paper is also sold with a choice of borders. The Now camera is fully automatic for exposure and focus with minimal control other than turning the flash off or enabling a double exposure mode, but in my tests the results were generally well-exposed and natural-looking. The Now cartridges contain eight prints and work out around $2 or pounds a shot, making them roughly double that of INSTAX Square, but they’re comfortably larger and some will prefer the less contrasty style.

Check prices on the Polaroid Now at Amazon. Alternatively get yourself a copy of my In Camera book or treat me to a coffee! Thanks!

The Polaroid Now is an instant camera that delivers large square prints with minimal effort. It’s available in a variety of finishes including a Keith Haring edition adorned with the pop artist’s iconic graphics. Find out how it compares to Polaroid Go and Fujifilm’s INSTAX in my review!

The Haring edition of the camera costs $119 or 129 pounds, making it only about ten or 20 more than the standard finishes, so a bargain if you’re into his style. The box is also branded with Haring graphics and Polaroid includes some notes on the artist too. It’s a really nice collectable.

Like other Polaroid Now cameras, it takes I-type of 600 film cartridges, with the latest I-type costing around $16 or pounds per pack and containing eight prints, so that’s about $2 or pounds per print, although the price falls a little if you buy packs of three or five. Like other instant processes, the chemicals are built into the paper, so everything you need is in the cartridge.

Polaroid sells I-type film in colour or black and white versions, as well as with a variety of borders, including, you guessed it, a Keith Haring option with four different designs.

I-type film produces fairly large prints measuring 88x107mm or 3.5 by 4.2 inches, with the actual square picture measuring 79x79mm or 3.1×3.1 inches with a thicker border on one side that contained the chemicals but becomes a handy place to write notes with a sharpie later.

This makes it the largest of the square instant formats, but equally I-type is the most expensive of the three square formats as well, with the prints working out roughly double that of INSTAX Square or Polaroid Go.

In terms of physical design, controls and operation, it’s the same as other Polaroid Now cameras. Size wise, it’s actually roughly similar oveall to an INSTAX Square camera despite delivering larger prints, but if you want a truly tiny instant camera, the Polaroid Go remains the one to beat. It looks absolutely tiny next to the Now and INSTAX cameras.

To load I-type film, remove the cartridge from the foil packet, open the front of the camera and push the cartridge all the way in before clicking the door shut; the first sheet to emerge is a disposable safety cover.

Like other Polaroid Now cameras, it employs a built-in rechargeable battery that’s charged over a Micro USB port and good for about 15 cartridges. The controls are the same too: in the rear corner you’ll find the power and flash buttons alongside a digital counter indicating the number of pictures remaining. Composition is with an optical viewfinder alone and while there’s no selfie mirror or even semi-reflective viewfinder coating, it’s easy enough to take selfies by just pointing the camera at yourself. Below the viewfinder on the front right is a small button to toggle between the double exposure mode and self-timer – although there’s no tripod mount. Exposure is fully automatic with no manual overides, and unlike the OneStep+ which needed you to switch between distant and close subjects, the Now automatically switches lenses.

When you’re ready, just push the big red button to take the shot. The print will then emerge under a spring-loaded protective shield which you should leave for a few seconds before removing the print and placing it either face-down or in a dark place like a bag or pocket to complete development. The print should be fully developed after a few minutes, but remember to keep it protected from light during this time. No need to shake it either. The mantra should now be shade it like a Polaroid picture.

The mild wide-angle coverage is ideal for general snaps, selfies and small group shots, and I was fond of the natural-looking tones and colours, as well as the camera’s ability to fairly confidently handle both very bright and very dim conditions, something that not all INSTAX cameras find as easy. The improved flash also did a good job at balancing exposures.

But how do they directly compare against other instant formats? I took a bunch of photos of the same view with a variety of instant cameras for comparison. Apart from the obvious size differences, you can see how Fujifilm’s INSTAX process is higher contrast with a punchier style, albeit sometimes crushing shadows and highlights, while Polaroid’s I-type opts for a more natural style, leaving the Go to look the most muted here for a vintage feel. There’s no winner here, only a personal preference, so which is your favourite process? You can’t argue with the size of the I-type prints though which are comfortably bigger – and more expensive – than its rivals, other than Fujifilm’s strangely neglected INSTAX Wide format.

It’s also interesting to compare Polaroid’s I-type prints alongside their more recent Go format, which you might first assume is just a shrunken version. But judging from my own test prints anyway, I-type proved to be more accurate and better-balanced overall, versus the more muted vintage approach of Go. Again no winner, just different styles.

I really enjoyed using the Polaroid Now system. It may remove almost all manual control for an easier experience, not to mention lack the Bluetooth control of the OneStep+, but it generally did a good job at capturing the subjects I pointed it at. The prints were also refreshingly natural-looking and relatively large compared to Fujifilm’s INSTAX Mini and Square formats, albeit more expensive per shot.

As a huge Haring fan, I of course loved the branding, even though the graphics around the camera became a little stretched and distorted on the the underside to fit the unusual shape. It’s still the finish I’d go for though.

Ultimately I love that Polaroid and Fujifilm are taking different aproaches to instant photography, with cameras and processes to suit different styles and tastes. I’d be very happy to have the Now in my collection. Polaroid may be a small operation but I think they’re doing a great job.

Check prices on the Polaroid Now at Amazon. Alternatively get yourself a copy of my In Camera book or treat me to a coffee! Thanks! 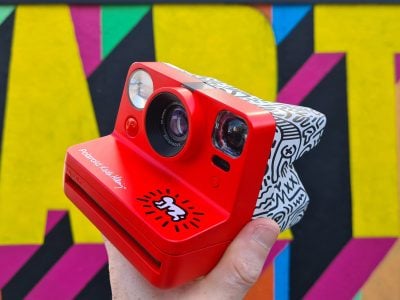 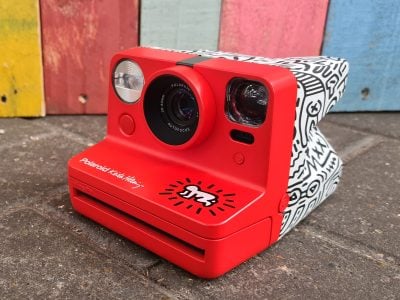 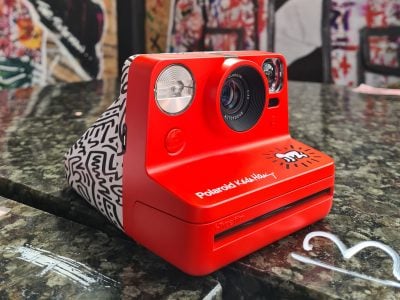