The Lumix DMC LX2 is instantly recognisable as a Panasonic compact. It’s a smart-looking camera with a selection of dials and buttons which hint at the degree of manual control available while giving an air of seriousness. With design elements harking back to classic film rangefinders, you know from the first look the LX2 will appeal to photographic enthusiasts.

Aside from a different screen, the exterior design, build quality and control layout is virtually unchanged from the earlier Lumix LX1. The main body measures 106x56x26mm, while the fixed lens housing protrudes by an additional 17 mm. A relatively deep lens cap clips securely on the front increasing the total depth of the lens section to 22mm. You’ll need to remove the cap when powering up the camera, for the lens quickly extends by 25mm. Luckily the camera detects if the caps attached when you power-up and requests you remove it and press the arrow-right button.

The protruding lens housing, especially with the cap attached means the LX2 is nowhere as slim as compacts sporting a flush front surface, but it’ll happily slip into larger pockets without complaint.

Like the LX1 before it, the build quality is excellent. The LX2 feels very solid without any hint of creaks and is clearly a quality piece of kit. The deep lens housing has allowed Panasonic to include a larger than average protrusion on the front for your middle finger to lean against, and it offers a reasonably secure and comfortable grip for a compact.

There are two switches around the lens housing, one on the top which selects between the three aspect ratios (16:9, 3:2 and 4:3), and the other on the side selecting the focus mode (auto, macro and manual), more of which later.

The right half of the top surface is home to the main command dial, power switch, Optical Image Stabilisation button and a zoom rocker which surrounds the shutter release. The command dial boasts an impressive array of creative and manual control for a compact including Auto, Program, Manual, Aperture and Shutter Priority modes. Unlike the LX1’s pair of programmable SCN positions though, there’s now just one on the dial; the second has been replaced by a new direct printing option for use with PictBridge printers.

The rear surface is dominated by the new 2.8in widescreen display which we’ll fully describe in the Features section. To the right of this are the same controls as the earlier LX1. These include a small joystick used for manual focus and exposure adjustments, along with menu navigation and playback control. It can additionally be used to select one of nine AF areas.

If you push the joystick in for a moment, you’re also presented with a shortcut menu offering direct access to options relevant to the particular shooting mode. This menu on the earlier LX1 offered direct access to white balance, ISO, image size and compression, to which the LX2 now adds metering and AF mode. Working like the Function button on the more sophisticated FZ50, it’s great to enjoy the same direct access to key settings on a compact without having to delve into menus.

Below the joystick is the usual Panasonic arrangement of four buttons, again used for menu navigation, playback control or for selecting various options during shooting, while a fifth button in the middle fires-up the main menu or confirms settings.

Pressing the top of the four buttons while shooting presents the exposure compensation settings, offering the traditional +/-2EV range for brightening or darkening exposures. Pressing the bottom button shows the last image taken (or viewed during playback), and like playback mode, you can magnify using the zoom rocker. 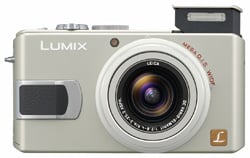 Pressing the left button gives you the choice of a two or 10 second self-timer, while the right button cycles through the options for the built-in flash if it’s already been manually popped-up using a small switch on the top surface. Flash options consist of Auto, Auto with red-eye reduction, Forced on (with red-eye reduction if you’re using the Party or Candle Light scene presets) or Slow sync with red-eye reduction, and you can force the flash off by pushing it back into the body. Two further buttons operate the LCD and continuous shooting options – see Features page for more details.

A single small door on right side of the body opens to reveal the DC-in and a combined USB / video out port. A larger door under the grip side of the body houses the battery and memory card.

The LX2 is powered by the same 1150mAh Lithium Ion battery pack as its predecessor and is supplied with a mains recharger. Panasonic claims lower power consumption though allows the LX2 to now enjoy 300 shots per charge under CIPA conditions.

During our first test period we fired-off just under 200 images over three days under a variety of (often cold) conditions before it needed recharging.