To compare real-life performance I shot this scene with the Panasonic Lumix GF7, Olympus PEN E-PL7 and Samsung NX3000 within a few moments of each other using their best quality JPEG settings.All three cameras were fitted with their respective kit zooms and were adjusted to provide the same vertical angle of view.For this test all three cameras were mounted on a tripod and set to Aperture Priority exposure mode. Image stabilisation was turned off and the camera settings were otherwise left on the defaults.The image above was taken with the Lumix GF7. I’d previously determined that the best results with the GF7 were produced with the lens set to f5.6 so I set this at the Lumix GF7’s base 200 ISO sensitivity setting and it selected a shutter speed of 1/1250. The Olympus PEN E-PL7 was also set to its base 200 ISO sensitivity setting and in Aperture Priority mode with f5.6 selected it metered the same 1/1250 shutter speed. At its base 100 ISO sensitivity setting the Samsung NX3000 selected a shutter speed of 1/640 – so all three cameras effectively metered the same exposure. As usual the 100 percent crops below are taken from the areas marked in red above.The Lumix GF7 has turned in a quite impressive set of crops with a good level of detail and nice sharp edges. If you were in a critical frame of mind you might say the first crop, which is taken from close to the left edge of the frame, is a little bit soft. You wouldn’t be wrong, but it’s a question of degree and in this case it’s very slight. You’d expect an inexpensive kit lens to be less sharp at the frame edges, so if there’s anything surprising here it’s that the Lumix 12-32mm f3.5-5.6 zoom is almost as sharp at the edges as in the centre.The second crop, from more or less the centre of the frame is where the crispest detail is to be found though. In this, and the third crop you can make out a good level of detail in the stonework of the towers and the roof tiles. Despite a little bit of atmospheric haze the lighthouse in the fourth crop is a distinct white column and the tree and chimneys in the foreground of this crop are also nice and sharp. Finally the crop from the right edge of the frame is, like the one on the left, a tiny bit softer than those from the centre of the frame, but still has nice clean edges and a good level of detail.

Overall, the Lumix GF7’s sensor and kit lens produce results that all but the most demanding photographers would be very happy with. But if you want to squeeze every ounce of quality from the GF7’s sensor, there’s always the option of fitting a higher quality prime lens and/or shooting RAW.

The results from the Olympus PEN E-PL7 are quite disappointing when viewed alongside those from the Lumix GF7. The Olympus 14-42mm f3.5-5.6 EZ lens has produced crops that are very soft and a little blurry, not just at the edges, but across the entire frame. I was so concerned about the quality of these results from the E-PL7 that I contacted Olympus and asked them to send a replacement. As it turned out, the images I shot with the new lens were no better, so it appears that either we were very unlucky, with two individual lenses producing poor results, or the quality of the M.Zuiko 14-42 f3.5-5.6 EZ kit lens leaves much to be desired. As you can see from the sample images in my E-PL7 review, the camera produces much better results with other lenses attached.

The crops from the 20 Megapixel Samsung NX300 show a smaller area with larger detail than those from the two Micro Four Thirds models. Overall I’d say the NX3000 crops are closely matched with those from the Lumix GF7 in terms of detail and sharpness. 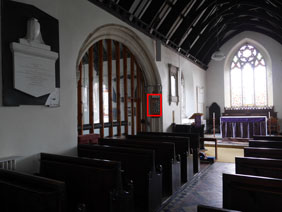 To compare noise levels under real-life conditions, I shot this scene with the Panasonic Lumix GF7, Olympus PEN E-PL7 and the Samsung NX3000, within a few moments of each other using their best quality JPEG settings at each of their ISO sensitivity settings.All three cameras were fitted with their respective kit zooms and were adjusted to provide the same vertical angle of view.

For this test all three cameras were mounted on a tripod and image stabilisation was turned off, all other settings were left on the defaults.

The image above was taken with the Panasonic Lumix GF7. Set to Aperture Priority mode and at its base 200 ISO sensitivity setting, with the aperture set to f5.6 the GF7 metered a shutter speed of 1.6s . Also set to its base 200 ISO sensitivity setting and f5.6, the Olympus PEN E-PL7 meterd the same 1.6s exposure. I adjusted exposure compensation on the Samsung NX3000 by +1/3EV so that, at its base 100 ISO and f5,6 setting it selected an equivalent 3s exposure.

Before I examine the crops in detail just to note that the Lumix GF7’s base ISO sensitivity setting is 200 ISO – the 100 ISO settings is available when the extended ISO range is selected from the settings menu. So let’s start by looking at the Lumix GF7’s 200 ISO crop which looks pretty clean. You have to look quite hard to see the scantest evidence of noise texture in the white label at the top of the hymn board and the numbers.

The 400 ISO crop is a tiny bit grainier but even at 100 percent viewing size I’d be happy to use anything up to and including 800 ISO without a second thought about noise. The 1600 ISO crop is noticeably noisier, but you’d still need to be pixel-peeping at or near to 100 percent to see it. 3200 ISO looks distinctly clumpy, but it looks perfectly good even at full size on a 15inch screen. Even 6400 ISO looks almost respectable, but the two highest settings – 12800 and 25600 ISO are not settings you’d want to use other than in desperate circumstances.

Like the Lumix GF7, the Olympus PEN E-PL7 has a base setting of 200 ISO extendable down to 100 ISO. The 200 ISO crop compares favourably with that from the GF7 and there’s little, if anything to tell them apart. At 400 ISO I think the edges on the PEN E-PL7 crop may be a little less clean, but there’s not much in it. At 1600 ISO, however, I think the PEN E-PL7 sensor is producing more noise than the Lumix GF7. The crop certainly looks clumpier. And from there all the way up to 25600 ISO it looks like the Lumix has an edge – certainly the text and numbers are more legible in the Lumix crops.

The 20 Megapixel sensor of the Samsung NX3000 produces a slightly smaller crop area with larger detail and the other difference is that the 100 ISO setting on the NX3000 is its base sensitivity, not part of an extended range, so you should compare the 100 ISO crop from the NX3000 with the 200 ISO crops from the other two models. Despite the 1/3EV exposure compensation the NX3000 crops look a little darker than those from the Lumix GF7 and PN E-PL7. In terms of noise, I think the Low ISO crops from the NX300 are cleaner than those from the Micro Four Thirds models as you’d expect from a camera with a larger APS-C sensor. Interestingly though, once you get beyond 1600 ISO the NX3000’s advantage evaporates – at higher sensitivities there’s not much in it and if anything the Lumix GF7 turns in better results from 3200 ISO upwards.