The Lumix GF6 is Panasonic’s latest consumer mirrorless system camera, although is pitched higher than previous GF models. It replaces the GF5 with among other things an updated 16 Megapixel sensor, a tilting 3 inch 1040k dot LCD screen, and built in Wifi with NFC tap-to-connect for sharing photos.

With one or two minor diversions along the way, the trend for the GF series has been towards bodies that are more compact and simpler to operate. Despite the re-appearance of the mode dial, last seen on the series debut model, the Lumix GF1, The GF6 is the closest thing you’ll find in the Lumix G range to a point-and-shoot. That’s not to say it lacks advanced functions, but its feature set is tailored to upgraders looking for an interchangeable lens model to take their photography to the next level.

In that respect, the GF6 is hard to fault. With the new 14-42mm kit lens fitted it’s one of the most compact mirrorless cameras around and its simple control layout and accessible touch-screen will feel comfortably familiar to anyone used to an advanced compact. Its capable Auto modes, copious scene presets, and Creative control effects filters provide an easy route into more adventurous photography and, along with its new Panorama mode an opportunity to try something creative without the need for technical know-how.

But the GF6 doesn’t stint on on more advanced features. It of course offers the traditional PASM exposure modes along with good bracketing, an HDR mode, respectable continuous shooting and one of the fastest and most capable Autofocus systems on a mirror-less CSC. It also provides full PASM exposure control when shooting movies as well as the ability to use creative effects. Finally, with its built-in Wifi and NFC features, the Lumix GF6 is one of the best connected of all the mirrorless models that currently offer built in Wifi. Panasonic has identified the two areas that are crucial for successful wireless sharing on any camera – easy connection and easy operation. It has made a huge effort to get it right in both those areas and has succeeded admirably. Now before my final verdict, here’s how it compares to two rival models. 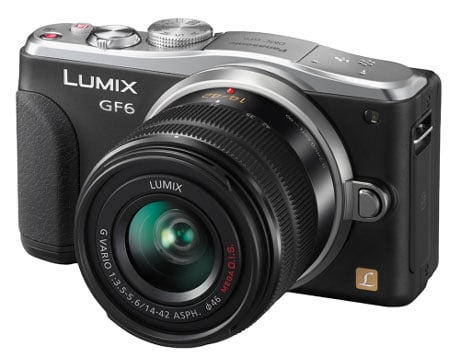 Like the Lumix GF6, the Olympus PEN E-P5 is based on the Micro Four Thirds standard jointly developed by Panasonic and Olympus. As such, you’d expect these two models have a lot in common, to begin with they share the same sized sensor, with same 16 megapixel resolution and the same lens mount. But beyond that there’s a world of a difference between them.

Let’s start with design. Where The PEN is a retro-stlyed model that harks back to the glory days of the 35mm half-frame PEN-F, the Lumix GF6 carries no such baggage. Whether you think that’s a good or bad thing is largely a matter of personal preference, but the PEN E-P5 is more sturdily contstructed, has more physical controls and handles better for it. That said, it’s also bigger and heavier than the GF6.

Olympus doesn’t make as much use of its touch-screen interface as Panasonic does. Physically, though, there’s not much difference in the screens with both offering the same 3 inch 3:2 proportioned screens with capacitance-type touch technology. The GF6’s screen does, however, flip up-and-over for self-shooting which the PEN E-P5’s can’t do. The E-P5 of course allows you to fit an accessory EVF and, for many, the new 2.36 million dot VF4 will be an automatic purchase along with the camera. There’s no such option on the GF6 which rules it out if you’re one of those people who doesn’t get along with screens. The lack of a hotshoe on the GF6 also means you can’t use an external flash like you can on the PEN E-P5.

Where Olympus favours in-body sensor-shift stabilisation, Panasonic builds stabilisation into some of its lenses. That means you get stabilisation with any lens you fit to the E-P5, but only with lenses that offer it on the Lumix GF6. The PEN E-P5 also has a neat new feature that allows you to choose which stabilisation you want to use when you have a Panasonic O.I.S lens fitted.

Both cameras offer a similar range of shooting modes with PASM as well as auto modes, scene modes, effects and so on; the E-P5 lacks the panorama mode of the Lumix GF6, though it makes up for it to a degree with its new Photo Story mode. The E-P5 has a faster full-resolution continuous shooting speed and a larger RAW buffer, though the GF6 offers faster 20fps reduced resolution shooting. Both are fitted with wifi, but the GF6 smartphone app provides much more control for remote shooting, plus the GF6’s use of NFC makes setting up a wifi connection a doddle with compatible handsets as you just tap the two devices together. While there’s currently only a limited number of smartphones that can use NFC, and iPhones aren’t among them, this is a system that’s bound to gain in popularity.

The video capabilities are similarly matched with the GF6 offering a 1080i50 best quality mode and the E-P5 1080p30. The GF6 saves its HD video files in AVCHD fromat where the PEN E-P5 uses QuickTime files. If you’re a serious videographer, the ability to attach an external mic to the the PEN E-P5 via its AP2 accessory port is also a factor to consider, but in its favour the Lumix GF6 allows you to change exposure settings while recording.

Finally, there is of course the price to consider. There’s no getting away from the fact that, for now at least, the PEN E-P5 is an expensive bit of kit. In contrast, the GF6 is one of the most affordable of the current crop of mirrorless compact system cameras and you can expect to pay around twice as much for the E-P5, plus more on top if you want the accessory EVF.

The Panasonic Lumix GF6 is based on the Micro Four Thirds standard jointly developed by Panasonic and Olympus. That means it has a smaller sensor than the APS-C sensor in the Fujifilm X-M1, though both models share the same 16 Megapixel resolution. In practice, I found very little to choose between the two in my low ISO quality tests, but the Fujifilm X-M1 outperforms the Lumix GF6 by a considerable margin at high ISO sensitivities.

Fujifilm has done well to develop a respectable lens catalogue in the relatively short time frame since the launch of the X mount. The addition of the new 16-50mm f3.5-5.6 OIS brings the total number of lenses fom Fujifilm itself to 8, five of which are primes, with another three on the way. But Micro Four Thirds, as used by both the GF6 and E-P5, is the most established of the mirrorless system formats with a much wider choice of more than forty lenses available from Panasonic and Olympus along with third parties including Sigma, Tamron, Samyang, Voigtlander and others. Like the X-M1, the Lumix GF6 lacks built-in stabilisation, but again, there’s a wider range of affordable stabilised lenses available for the GF6.

The Lumix GF6 lacks the degree of physical control the XM-1 provides, with two dials versus just the rear control wheel on the GF6. But the GF6’s secret weapon is its touch-screen, which Panasonic has put to good use everywhere from adjusting exposure controls to focussing and navigating menus. You can even use it to zoom with a motorised lens fitted. Another advantage the GF6 screen has over the XM-1 is that you can flip it up and over to self-shoot.

Neither model offers an accessory EVF, so with both you’re restricted to composing shots using the screen, however, the X-M1 does have a built-in hotshoe to which you can attach an external flash. Both models have built-in flash units which are roughly equivalent in terms of power.

Both are fitted with Wifi, but the GF6 smartphone app provides much more control for remote shooting, plus the GF6’s use of NFC makes setting up a wifi connection a doddle with compatible handsets, as you just tap the two devices together. While there’s currently only a limited number of smartphones that can use NFC, and iPhones aren’t among them, this is a system that’s bound to gain in popularity.

The video capabilities are similarly matched, with the GF6 offering a 1080i50 best quality mode and the X-M1 1080p30. The GF6 saves its HD video files in AVCHD fromat where the X-M1 uses QuickTime files. Both are fitted with stereo microphones, but neither has a jack to attach an external microphone. The GF6 provides some built-in audio control as well as wider manual exposure control for movie shooting and, as on the PEN E-P5 you can make use of the effects filters for movie shooting. What’s more, you can use the touch screen to focus while recording.

Finally, although the Fujifilm X-M1 isn’t as expensive as the PEN E-P5 it’ll still set you back around 30 percent more than the Lumix GF6, whichever way you look at it, that’s a heavy price to pay for a camera that’s has little to offer over the GF6 than a larger sensor with better high ISO performance. But if lower noise at high ISOs is important to you and you like Fujifilm’s lens selection so far, the X-M1 is the cheapest way to enjoy the X-mount and X-trans sensor.

Given the current obsession with retro styling and rangefinder chic, it would be easy to pass over a camera like the Panasonic Lumix GF6 in favour of something superficially more classy. But while it may not look as sexy and desirable as models like the Olympus E-P5 and the Fujifilm X-M1, the Lumix GF6 has a huge amount to offer photographers of every ilk. Yes, it’s marketed as a consumer model, but the return of the mode dial along with its other advanced features gives it a much broader appeal than earlier GF models. Only the most demanding enthusiasts, those who like the kind of physical control offered by multiple dials and the option to add a viewfinder, plus features like focus peaking and fast continuous shooting are likely to pass the GF6 over for something more capable, and probably bigger, heavier and more expensive as a result.

So if the GF approach suits you, is it worth considering an earlier model? The previous GF5 remains in Panasonic’s catalogue for now, but I’m not sure I’d recommend it as an alternative to the GF6. You might save a little cash, but you’d be sacrificing some great features, like the forward facing screen with Self shot mode, Low light AF, intervalometer, Panorama shot, and of course the Wifi connectivity. Those are the features that define the Lumix GF6 and they’d be hard to give up, so it’ll come as no surprise that we’re awarding the Panasonic Lumix GF6 a Cameralabs Highly Recommended award. It’s a great option for anyone upgrading from a point-and-shoot into the world of higher quality interchangeable lens cameras.