The Panasonic Leica 25mm f1.4 is a great quality standard lens for the Micro Four Thirds system. Compatible with Panasonic Lumix G, Olympus PEN and Olympus OMD cameras it delivers very sharp images in all but the extreme corners and can also achieve a shallow depth of field with attractive bokeh effects. It sadly doesn’t have weather sealing but the build quality is otherwise very good and the manual focusing ring is silky smooth in operation – albeit motor-assisted like most Micro Four Thirds lenses.

Use the lens between f2.8 and f5.6 and it’ll deliver pin-sharp details with high contrast across almost the entire frame. On my test sample there was some softening in the extreme corners, particularly on one side suggesting a little decentering, but overall I was very satisfied by the performance, especially at the sweetspot of f4. It delivers superbly detailed landscape and architectural shots with natural perspective, making it my preferred general-purpose prime. Like other Micro Four Thirds lenses though, beware of using apertures of f8 or smaller though as diffraction quickly takes hold and softens the image.

Open the lens aperture up to its maximum f1.4 and you can effectively throw backgrounds nicely out of focus while maintaining a crisp main subject. It’s important to remember it’s still only equivalent to a 50mm f2.8 in terms of depth of field on a full-frame system, but if you’re close to your subject you can still enjoy great results. The focal length may be a little short for a classic portrait lens, but when shooting kids who couldn’t keep still for long I actually found it more forgiving than, say, the Olympus 45mm f1.8, and it ended up giving me far more keepers. 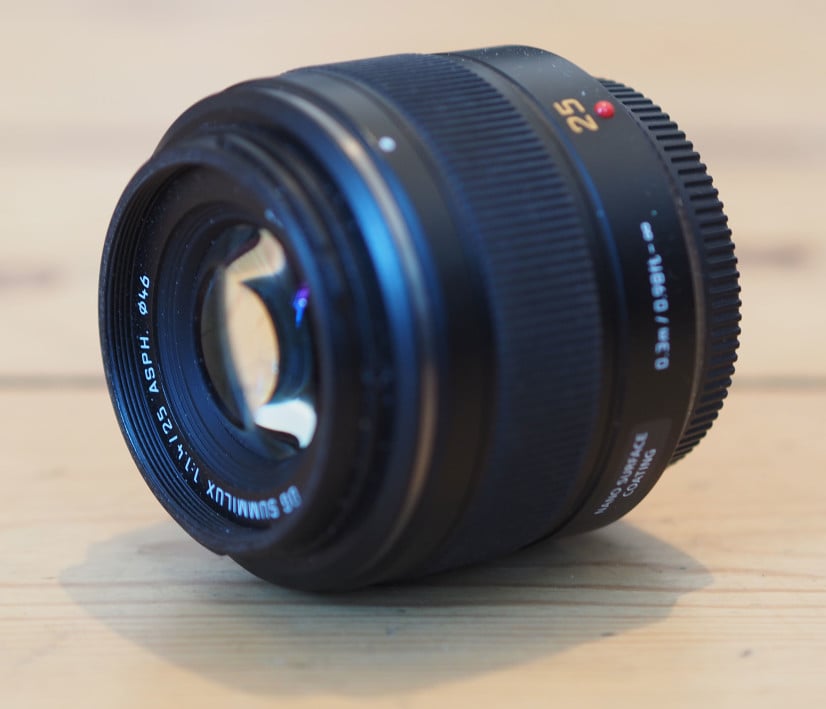 There’s not a lot to criticize. As I’ve mentioned there was a little softening in the extreme corners of the frame of my test sample even with the aperture closed-down, so it’s not as uniformly sharp as, say, the Olympus 45mm f1.8. The lack of weather sealing on a premium lens is always disappointing, but this was the case with all but the most recent top-end options in the Micro Four Thirds catalogue. There’s also no optical stabilisation, so if you’re using a Panasonic body you’ll need to be aware of minimum shutter speeds to avoid camera shake; Olympus owners of course enjoy the benefit of stabilisation built into their bodies. Before feeling too smug though, Olympus owners should watch, or listen out for the infamous rattlesnake sound as their camera’s constantly adjust the aperture in live view when composing – it can be quite audible with this lens.

It’s also not exactly cheap, but equally not that expensive either for a Leica-branded product. It only costs about 50% more than the Panasonic 20mm f1.7 which keeps it in reach of many photographers who want something a bit classier.

The biggest problem is arguably the actual 50mm equivalent focal length itself and how useful that’s going to be to you. There’s no doubt 50mm lenses are enjoying a resurgence in popularity right now, but it’s important to differentiate between lenses which deliver a 50mm equivalent field of view on your camera and those which actually have a 50mm focal length. The latter are popular on cropped-format DSLRs because they’re cheap and easy to make, while the cropped sensor effectively turns them into useful 75mm (or thereabouts) portrait lenses. In contrast the Panasonic Leica lens I’m reviewing here is a 25mm which acts like a 50mm on a full-frame camera. It costs around five times as much as the budget 50mm lenses for DSLRs so the price is far from a no-brainer, and the effective focal length, while once the standard for all film cameras, now sits uncomfortably between mild wide angles which are arguably better for general-purpose use and short telephotos for classic portrait use. It’s neither one thing nor the other.

The Micro Four Thirds system is also blessed with a variety of alternative wider primes that are better-suited for walkaround use. The closest in numbers is the more recent Olympus 25mm f1.8, but there’s also Panasonic’s own 20mm f1.7 (40mm equivalent), followed by a pair of Olympus 17mm options (34mm equivalent), one with an f1.8 aperture, one with f2.8.

Many feel the 35mm focal length is the ideal for general-purpose use, allowing you to squeeze-in comfortably more than a ‘standard’ lens without suffering from the edge distortion of a wider model. Meanwhile the Panasonic 20mm with its 40mm equivalent field of view sits neatly in-between arguably delivering the best of both worlds. So which is best for you?

You can spend a long time comparing the specifications and performance, but for me the decision between any of the three primes mentioned above and the Panasonic Leica 25mm f1.4 simply boils down to how often you intend to use the lens for portraits. If you intend to shoot lots of portraits with it, then you’ll appreciate the more flattering perspective of the longer 25mm focal length coupled with its shallower depth of field. But if it’ll mostly be for general-purpose walkaround use with few close-up portraits, then the other three would probably prove more flexible.

The decision could be further cemented by the presence of a short telephoto prime in your current or planned collection. For example if you have or were considering the Olympus 45mm f1.8, you’ve arguably got portraits already covered, allowing you to go for something that bit wider and more flexible as your general purpose prime.

This argument would seem to render the 25mm f1.4 redundant other than for those who have a specific fondness for the 50mm focal length, perhaps for historical reasons. But this would be doing the lens an injustice in my view.

I selected it as part of a three lens kit to take away for a one year world trip alongside the Lumix 7-14mm ultra-wide zoom and the Leica 45mm f2.8 macro, later swapped for the Olympus 45mm f1.8, see below. The Panasonic Leica 25mm f1.4 slotted inbetween the ultra wide zoom and short telephoto primes very successfully, taking the roles of general-purpose coverage and close range portrait work. I won’t try and pretend there wasn’t a small part of nostalgia at work, but I found it a perfect fit and really enjoyed shooting with this slightly narrower field of view as my walkaround lens after growing up with it on film cameras.

Of course ultimately lens selection is a highly personal choice. The sensible money would still recommend something a bit wider for general-purpose use and something a bit longer for portrait work. Then of course there’s the release of the more recent Olympus 25mm f1.8. This coupled with the handful of issues I mentioned earlier means the Panasonic Leica 25mm f1.4 misses out on my top award. But if the 50mm equivalent focal length is the right fit for you then I can recommend this lens if classy rendering of out-of-focus areas is important to you. It turned out to be one of the most versatile options in my own kit and one I would select again; indeed most of the product photography you see at Cameralabs is taken with this lens.

Bad points
Some softening in extreme corners on test sample.
No weather sealing. No optical stabilisation.
Rattling sound when composing with some Olympus bodies.
Lens hood looks classy but can’t be reversed.