The Leica Summilux 15mm f1.7 is a high quality general-purpose prime lens for Panasonic and Olympus bodies, and one that’s also priced fairly compared to alternative options. Its focal length, equivalent to 30mm in full-frame terms, may be unique in the range, but it’s ideally-suited as a versatile walk-around lens. It’s a little wide for traditional portraits, but landscapes, architecture, even detail shots with a shallow depth of field are all comfortably within its grasp, and the optical quality is also a step-up from alternatives with a similar focal length. During my time with it, the lens rarely left my body except when I needed to try it on a different body!

The Summilux 15mm delivers high contrast images with very crisp details even with the aperture wide-open. It may not be quite as stunning as the Lecia Nocticron 42.5mm f1.2 in this regard, but it’s also a lot smaller and cheaper. There’s a small amount of vignetting and corner softness when wide open, but it reduces at f2 and is essentially gone by f2.8. What little CA is present can be easily removed in software, and any geometric distortion is automatically corrected for JPEGs and compatible RAW converters, including ACR. Crucially in my tests the Leica also out-performed the Olympus 17mm f1.8 in terms of contrast and corner sharpness. I also preferred its style of rendering out-of-focus elements with smoother bokeh and more circular specular highlights with less onion ringing. Admittedly the differences between them are minor, and I still rank the Olympus 17mm as one of my favourite all-round lenses, but if you look closely the Leica definitely enjoys an edge across the board. See my results pages for a full report.

Physically the Leica 15mm is compact but equally at home on the larger DSLR-styled bodies as it is on the smallest models. I enjoyed using it as my walkaround lens on the tiny Lumix GM1 – where it also becomes one of the few lenses not to overhang the base – but also loved fitting it on the Olympus OMD EM1 where I could exploit the body’s built-in stabilization.

There are several primes to choose from in the semi-wide section of the Micro Four Thirds catalogue, but arguably the biggest rival for the Leica Summilux 15mm f1.7 is the Olympus 17mm f1.8.

Both share similar dimensions and weights, but are styled quite differently. The Olympus tapers slightly towards the end, making it look a little smaller than the Leica which has a more consistent barrel thickness. One important difference for owners of the Lumix GM1 though is the Olympus barrel protrudes fractionally below the base of the body, which causes problems when mounting on a tripod. The Leica lens though is a perfect match for the GM1.

The Leica 15mm sports an aperture ring that’s absent on the Olympus, but it only works on Panasonic bodies; mount it on an Olympus body and you’ll be adjusting the aperture with one of the body dials. Meanwhile, mount the Olympus 17mm on either Panasonic or Olympus bodies and you’ll be using body controls to adjust the aperture. Neither lens has optical stabilization, but if you want anti-shake for them, both work fine on the Olympus bodies and Lumix GX7 which have stabilization built-in.

In terms of focusing, each lens focuses fractionally faster when matched with a body from the same manufacturer, but only by a tiny amount – I wouldn’t call it a deal maker or breaker. But in terms of manual focus, I preferred the ring on the Olympus which pulls back to switch it to manual control. On my samples the focusing ring on the Olympus also felt smoother, but then it was more used than the Leica sample.

In terms of image quality the Leica 15mm f1.7 enjoys an edge across the board: slightly higher contrast, slightly sharper in the corners and slightly smooth out-of-focus rendering. Specular highlights are also rendered more circular and with less onion rings.

If you own the GM1 I’d recommend the Leica for its better physical match, but owners of other bodies will need to weigh-up the slightly improved image quality of the Leica over the slightly cheaper Olympus.Â  If you own a Panasonic body, the aperture ring may also swing the Leica in your favour. The good news though is Micro Four Thirds owners have two great semi-wide general-purpose lenses to choose from.

Lumix 14mm f2.5 and Lumix 20mm f1.7, both pancake lenses of a similar focal length, although of a lower specification.

When reviewing lenses for other mirrorless systems, I’m reminded how they often represent the only native option available. In contrast, Micro Four Thirds, as the most established mirrorless system not to mention one that’s driven by two camera companies, enjoys a variety of native lenses unrivalled by anyone other than Canon or Nikon DSLR systems.

The Leica Summilux 15mm f1.7 is a case in point. There may not be any other 15mm primes in the Micro Four Thirds catalogue, but you do have the choice of going for a 14mm f2.5, 17mm f1.8, 17mm f2.8 or 20mm f1.7 instead. In this respect, and also as the most expensive of the group, the Leica Summilux has to work especially hard to justify its place in your collection. Particularly so since many Micro Four Thirds users will already own one of the alternatives mentioned above.

It’s fortunate then that the Summilux 15mm f1.7 is very good. It may not be outstandingly good like the Nocticron 42.5mm f1.2, but equally it’s nowhere near as expensive or large. The Summilux 15mm may be pricier than the competition, but it’s much more affordable and attainable than the Nocticron. In my tests against the Olympus 17mm f1.8, the Summilux 15mm f1.7 delivered higher contrast images that were sharper in the corners at wide apertures, along with better-looking bokeh. Panasonic owners also enjoy the benefit of a manual aperture ring, while the Lumix GM1 gets itself a lens that’s flush to the bottom of the body, allowing tripod mounting. But don’t get me wrong, it’s equally good on Olympus bodies: during my test period it was my go-to lens for my Olympus OMD EM1, which brought the benefit of body-based stabilization.

If you don’t already own any of the similar focal length primes, then I’d say go for the Summilux 15mm if you can afford the premium over the Olympus 17mm f1.8. This especially applies if you’re a GM1 owner as it’s a better physical match. If you already own the Olympus 17mm f1.8 though, it’s a tougher sell. Sure it’s optically a little better, but not enough for most to consider an upgrade.

Ultimately the Olympus 17mm f1.8 remains a superb general-purpose lens that I can highly recommend, but it’s wonderful to also have a slightly better alternative available at a small premium for those who can justify it. Thankfully it’s also a relatively affordable option compared to some of the aspirational Leica options out there. I’ve said it before and I’ll say it again: Micro Four Thirds is the mirrorless system to go for if you love your lens choices – and the Summilux 15mm f1.7 is a valuable and welcome addition to the catalogue.

Bad points
More expensive than primes of a similar focal length in range.
Manual focusing ring was not always as smooth as I expected.
No weather-sealing.
Aperture ring redundant for Olympus body owners. 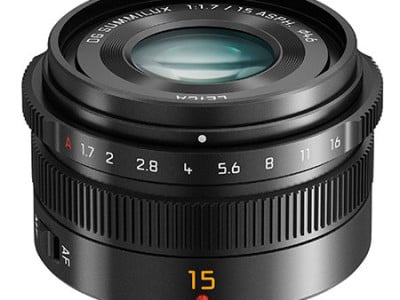 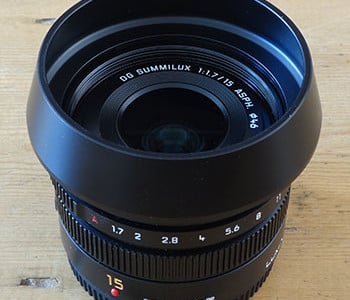