The Lumix S 20-60mm is a very welcome addition to the growing collection of L-mount lenses. The range allows you to use it as a general-purpose zoom, but with wider than average coverage at the short-end, making it perfect for landscape and architecture, but also ideal for video and vlogging. Sure, it misses out on the longer reach of more traditional general zooms, but if your bias is towards the wide-end, you’ll love the flexibility. As a more affordable option, it’s inevitably not pin-sharp in the corners at the widest apertures, but close it down a stop or two and it crisps-up nicely. The close-focusing is also a nice bonus. Perhaps most compelling of all though is the size, weight and price as the 20-60mm becomes one of the most compact and affordable lenses in the L-mount system to date, weighing and costing roughly half that of the 24-105mm f4. This not only makes it ideal for travel, but suggests cheaper, more compact L-mount bodies may be in the pipeline with this as the kit zoom. Whatever body you mount it on though, the Lumix S 20-60mm brings a touch of the exotic without breaking the bank and comes recommended. It’s become my favourite general-purpose zoom for the system.

Check prices on the Panasonic Lumix S 20-60mm at B&H, Adorama or WEX. Alternatively get yourself a copy of my In Camera book or treat me to a coffee! Thanks!

The Panasonic Lumix S 20-60mm f3.5-5.6 is a general-purpose zoom for the full-frame L-mount system, which means it works on L-mount bodies from Panasonic, Sigma and Leica. Announced in May 2020, it’s one of the smallest, lightest and at $599 or 620 pounds, one of the most affordable lenses in the L-mount system, while also delivering a fairly unique focal range that starts wider than most standard zooms. In the video below I’ve filmed a full review of the lens, but if you prefer a written version, keep scrolling down!

Above: In my video review I’ll show you everything you need to know about the Lumix S 20-60mm. Or if you prefer reading a written version, keep scrolling! 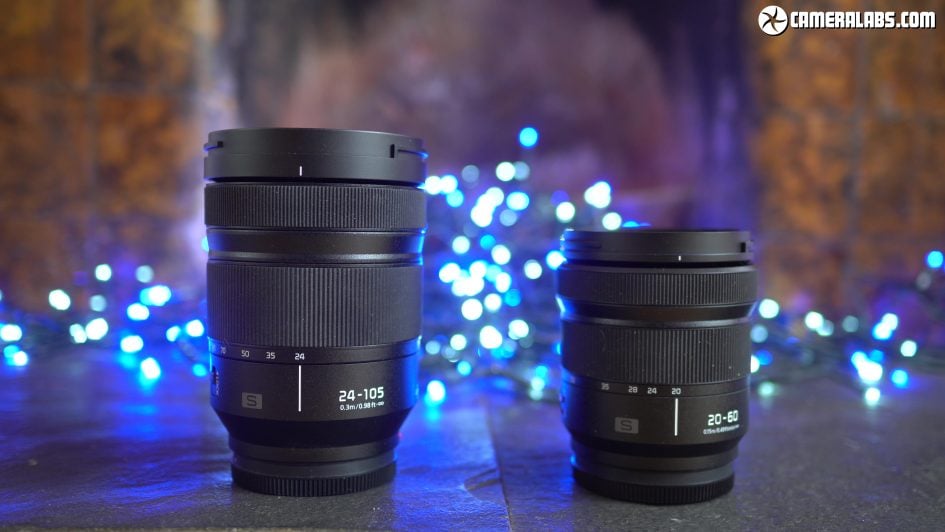 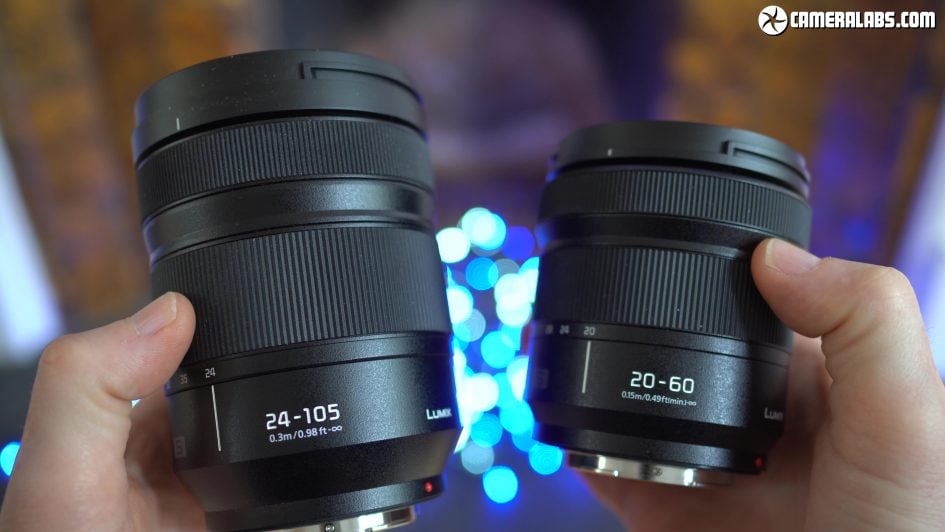 Above: The 20-60mm is a lot lighter too: almost half the weight at 350g versus 680g for the 24-105mm and you really notice the difference when carrying them round for any length of time. 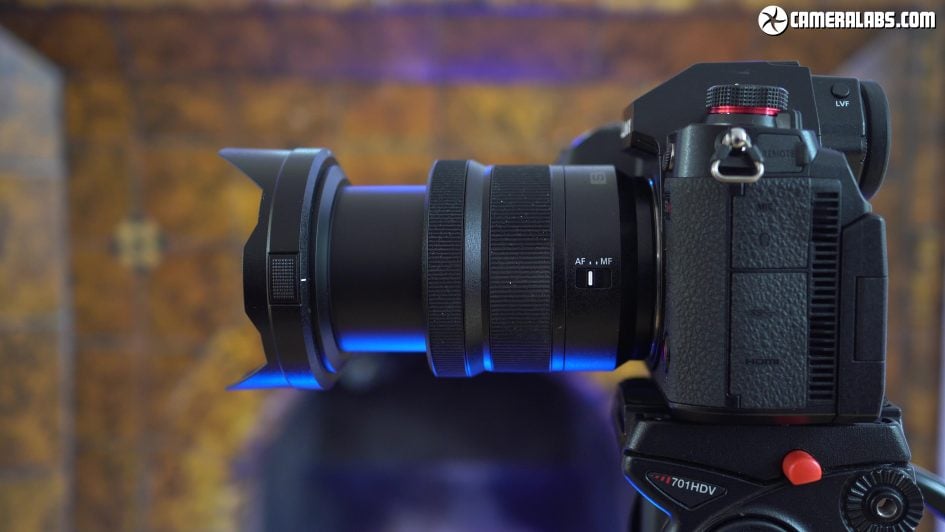 Above: The barrel of the 20-60mm is pretty simple with only a single switch to enable autofocus. Zooming the lens from 20 to 60mm extends the barrel, while at the end is a motor-assisted manual focusing ring. I’ve fitted the supplied petal lens hood. 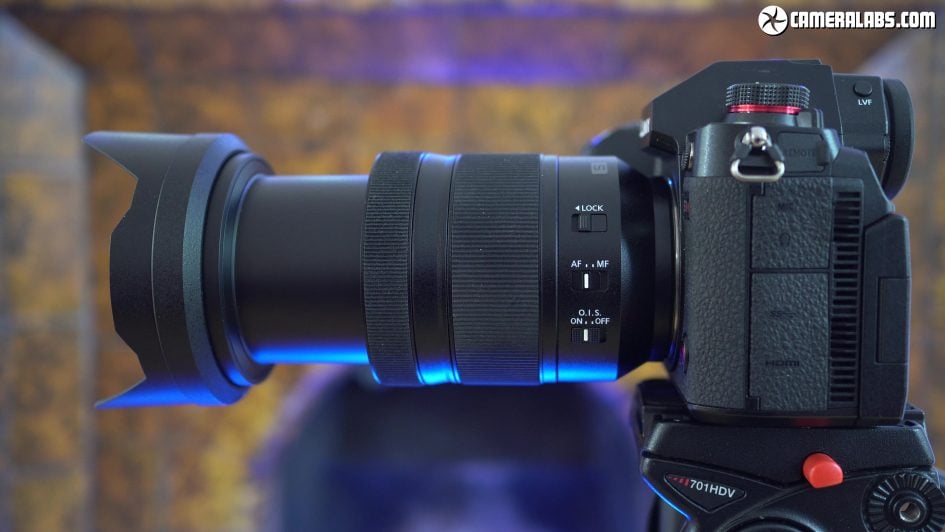 Above: And for comparison, here’s the 24-105mm again fitted with its supplied hood, and it’s clearly a longer lens even when retracted. Unlike the 20-60, the 24-105mm features optical stabilisation which can be enabled with a switch on the barrel, and in addition to the AF switch, there’s also a lock to keep the barrel at 24mm. The barrel extends as you zoom from 24 to 105mm and there’s a slightly wider manual focusing ring, again motor-assisted like most mirrorless lenses. 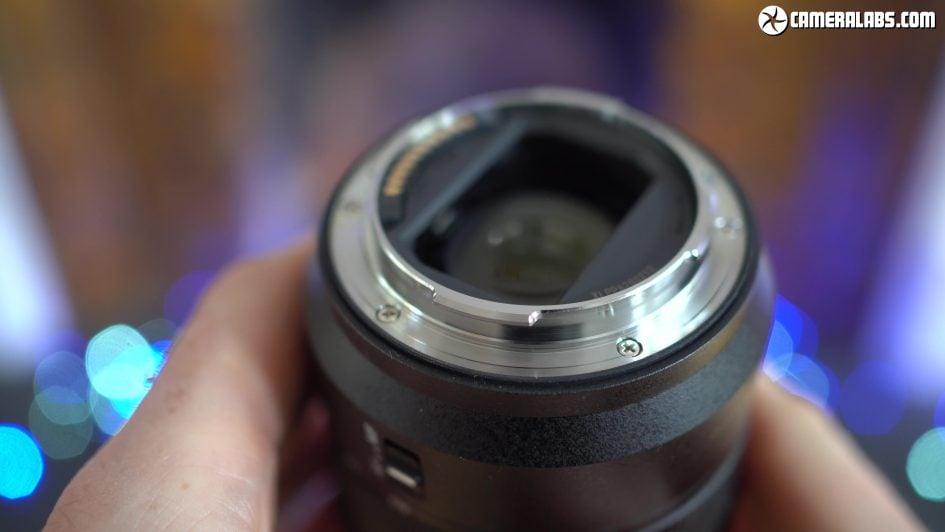 Above: Despite its lower price, Panasonic has gratifyingly made the 20-60mm dust and splash resistant, including a rubber seal at the lens mount and a fluorine coating on the front element. 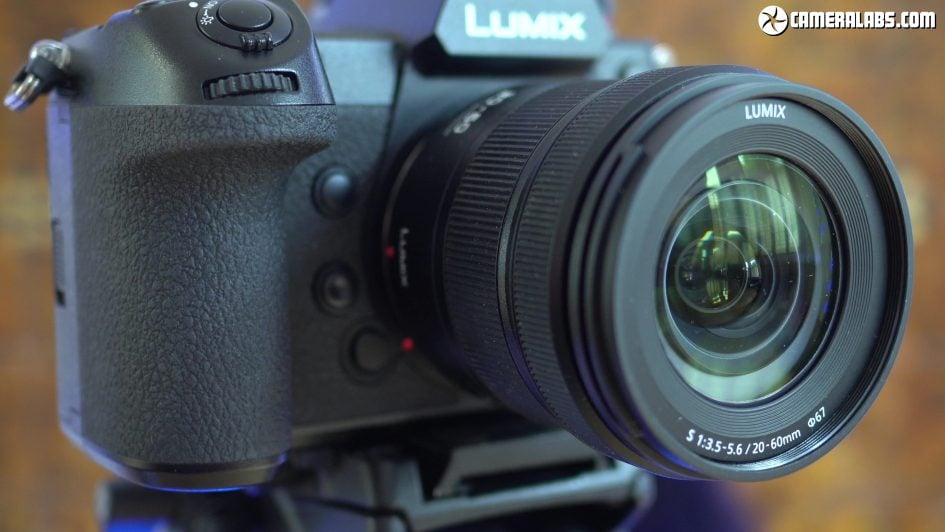 Above: In terms of optics, the 20-60mm employs 11 elements in nine groups, including two aspherical elements. The closest focusing distance is an impressive 15cm at the wide-end, or 40cm at the long end, delivering a maximum magnification of 0.43x for some nice macro results I’ll show you in a moment. There’s nine diaphragm blades, a variable aperture of f3.5 to f5.6, but no optical stabilisation, so to iron-out the wobbles you’ll need a body with sensor shift stabilisation – luckily all three of Panasonic’s Lumix S bodies fit the bill. As for focusing, it was swift and quiet in my tests, roughly similar to the Lumix S 24-105mm and like that model, dependent on the body you mount it on. 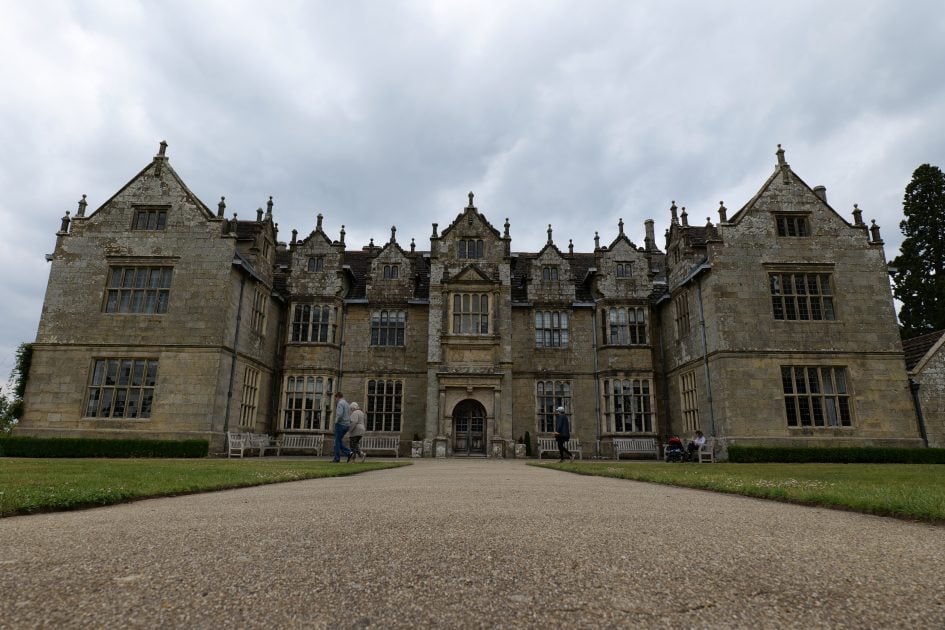 Above: here’s the range of the 20-60mm in practice, with the wider than average starting point ideal for architecture, landscapes or just cramped interiors. 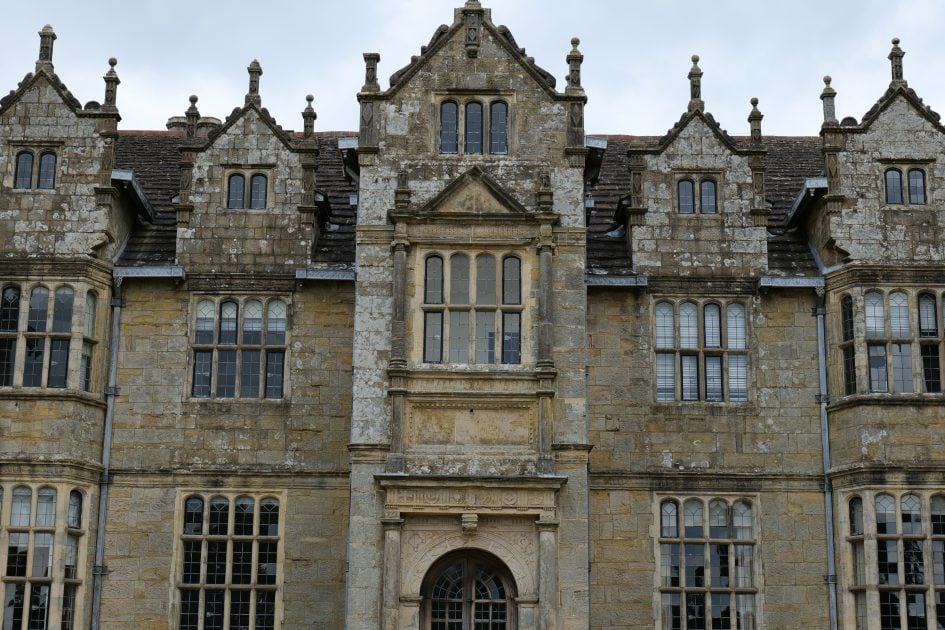 Above: It may not zoom as far as more traditional standard zooms at the long-end, but I’d happily trade that for the wider opportunities. It’s a fairly unique range and reminiscent of Panasonic’s earlier 10-25mm Micro Four Thirds lens with its 20-50mm equivalent coverage. 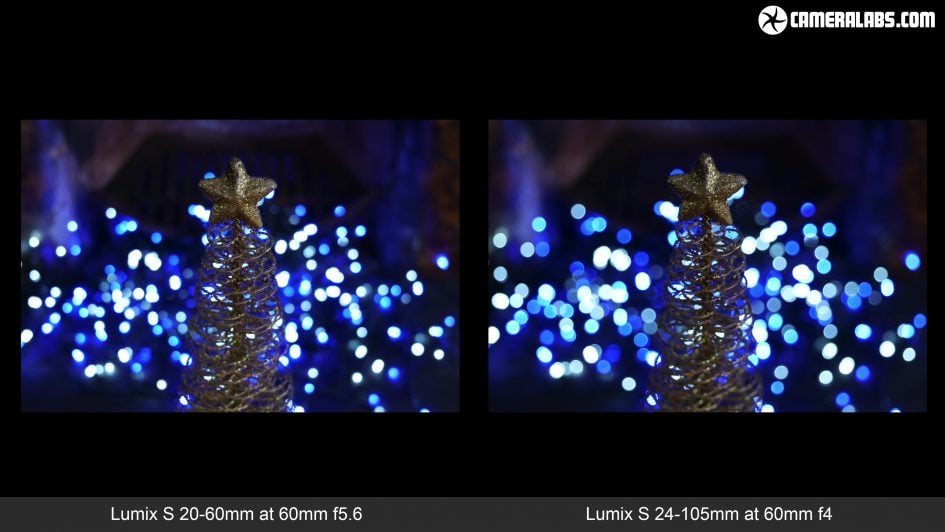 Above: The Lumix S 20-60mm keeps costs down with a variable aperture of f3.5-5.6, but while it lacks the constant focal ratios of the Lumix S 24-105mm f4 or 24-70mm f2.8, you can still achieve some nice blurring effects. Indeed at 20mm f3.5, it essentially matches the coverage and depth of field of the Lumix G 10-25mm at 10mm f1.7. On the left, here’s how the lens looks for bokeh blobs at 60mm f5.6 when the subject is near to the closest focusing distance. And for comparison, here’s the 24-105mm at 60mm f4 on the right, where the extra stop of aperture inevitably delivers slightly larger blobs and a little more blurring, but I’d say the 20-60mm is still delivering good results, and you’ll see more closeups on my samples page.

Check prices on the Panasonic Lumix S 20-60mm at B&H, Adorama or WEX. Alternatively get yourself a copy of my In Camera book or treat me to a coffee! Thanks!
Pages: 1 2 3 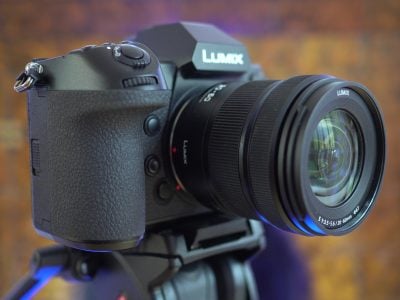 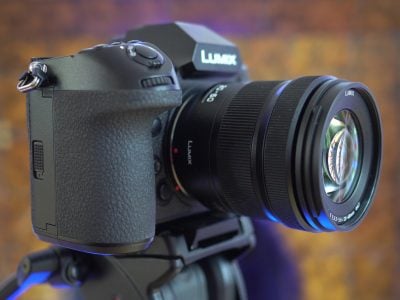 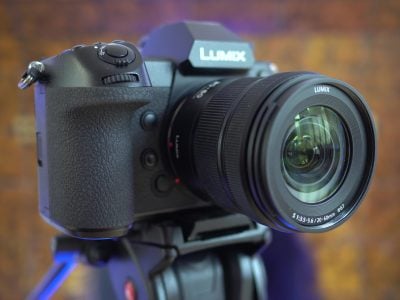