The Leica DG 50-200mm f2.8-4 is a compact and high quality telephoto zoom for Micro Four Thirds bodies. When mounted on a Panasonic or Olympus mirrorless camera, it delivers a 4x range equivalent to 100-400mm, making it ideal for sports, action, distant portraiture and some wildlife too. The focal ratio may not be constant through the range, but is sufficiently bright to give it the edge in low light and shallow depth-of-field performance over cheaper models.

The focusing was swift and quiet, the optical stabilisation achieved up to six stops in my tests, and like all of Panasonic and Leica’s collaborations, the build quality is excellent with smooth mechanics and a weather-sealed body; and once again, that relatively compact barrel means it’ll squeeze into bags or pouches that other telephotos may struggle with.

Optically my test sample was pretty sharp in the middle of the frame throughout the focal range and at most of the aperture settings. In the corners though, my sample became softer at 50 to 100mm when used with larger apertures (especially at 50mm f2.8 to 4) and only sharpened-up when closed to around f5.6. Interestingly the corner performance improved at longer focal lengths and at 150 and 200mm my sample looked pretty good across the frame even at larger apertures. To be fair, corner performance isn’t as big an issue with a long telephoto as it is with wider lenses: telephotos are rarely used for recording flat fields and more generally focused on a central subject with a more forgiving blurred background around them. Again the Leica DG 50-200mm delivered good results towards the middle of the frame where it’ll be used the most. If you are fond of shooting detailed landscape views with a long lens though and demand sharp performance across the frame and into the corners, there could be better choices for you. 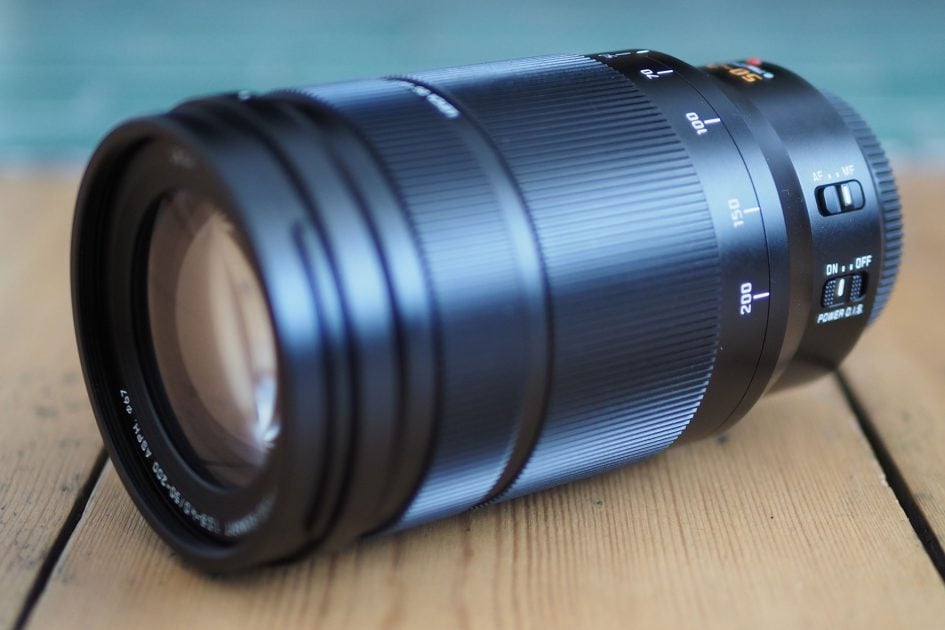 I was particularly interested to see how the Leica DG 50-200mm f2.8-4 compared to the Olympus 40-150mm f2.8 PRO zoom. In terms of sharpness across the frame in my tests, the Olympus visibly out-performed the Leica in the corners between 50 and 100mm at large apertures, while being a tad crisper in the middle too. At 150mm though the Leica pulled ahead a little in the corners, at least until stopped-down, and of course it keeps zooming on to a longer length of 200mm. But if you’re mostly shooting between 50 and 100mm, the Olympus delivered sharper results in my tests, particularly in the corners. 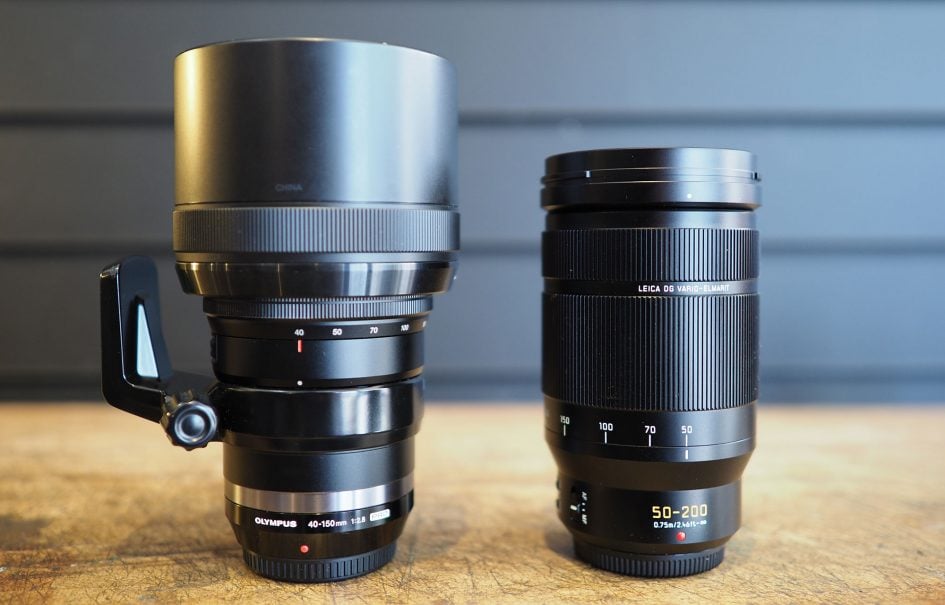 The Olympus also maintains a maximum aperture of f2.8 throughout its focal range, and again it’s very usable at this setting. At its maximum focal length of 150mm, the corner performance may not be as crisp as the Leica, but there’s no issues towards the middle of the frame and remember at 150mm the Olympus is essentially one stop brighter / faster too, allowing you to maintain lower ISOs or faster shutters.

There’s no denying the exposure benefit of an extra stop of aperture, but what about its impact on depth-of-field and rendering? I made a number of comparisons in the main section of the review where I discovered the differences between the Leica at 150mm f3.9 and the Olympus at 150mm f2.8 were not as great as you might expect. Sure the Olympus rendering was a little creamier, but the depth-of-field at typical portrait distances was fairly similar in appearance, plus of course if you can step back a little further, you could shoot with the Leica at 200mm f4 where the overall look becomes even closer. Bottom line is I wouldn’t choose the Olympus over the Leica simply to achieve a shallower depth-of-field, and if blurring the backgrounds on portraits is your desire, you’ll be better served with one of the brighter primes like the Olympus 75mm f1.8 or any of the 42.5 to 45mm options.

Staying with optics, another important difference between the lenses is the presence of optical stabilisation on the Leica, which in my tests delivered up to six stops of compensation at 200mm. In contrast, the Olympus lens is unstabilised, instead relying on body-based stabilisation in your camera. If you have an unstabilised body, then the Leica is much more attractive thanks to its optical compensation.

Place both of the telephoto zooms side-by-side and there’s significant physical differences to literally weigh-up. The Leica is noticeably more compact, shorter and lighter. I could squeeze it into my bag standing up whereas the Olympus always had to lay down and occupied much more space. That said, the Olympus enjoys the benefits of internal zooming (less chance of dust or moisture entering the barrel) and a tripod foot for greater stability (which also sports an Arca Swiss dovetail base). Both lenses may feature lens hoods that can fold over the end of the barrel for transportation, but the Leica hood must be reversed and re-mounted, whereas the Olympus hood simply pulls-out. There’s no doubt the Olympus feels more confident and has more physical features (including a programmable function button for Olympus bodies), but again it’s much larger.

If you’re comparing these lenses, you should also consider the pricing. At the time of writing, the Leica DG 50-200mm f2.8-4 cost roughly 20% more than the Olympus 40-150mm f2.8 PRO, the latter’s lower pricing also aided by the fact it’s been out for much longer. It’s a tough one to weigh up. The Olympus optically out-performed the Leica across much of the range, maintains its f2.8 aperture, boasts a better-featured body and is cheaper too. But the Leica counters this with a longer range, effective optical stabilisation and a much more compact and discreet body. Consider your needs carefully before making your decision. Check out my Olympus 40-150mm f2.8 PRO review for more details on that model.

The Leica DG 50-200mm f2.8-4 is a compact and high quality telephoto zoom for Micro Four Thirds bodies upon which it delivers a 4x range equivalent to 100-400mm. This is an ideal range for sports, action, distant portraiture and some wildlife too. The focal ratio may not be constant, but is sufficiently bright to give it the edge in low light and shallow depth-of-field performance over cheaper telephoto zooms. The focusing is fast and quiet, the optical stabilisation achieved up to six stops in my tests, and like all of Panasonic and Leica’s collaborations, the build quality is excellent with smooth mechanics and a weather-sealed body.

The compact dimensions and light weight also mean you’ll almost always have it with you in your bag, versus larger models which often get left at home. The smaller size, longer reach and presence of optical stabilisation are the key benefits over the Olympus 40-150mm f2.8 PRO, but it’s more expensive and lacks the constant aperture, crispness at shorter focal lengths, and physical benefits of its rival, so think carefully about your needs. Ultimately though another worthy addition to the Micro Four Thirds catalogue and one I can recommend. 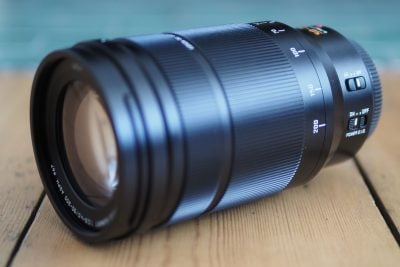 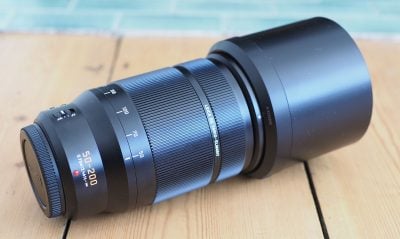