The Leica DG 10-25mm f1.7 is a unique and flexible lens for Micro Four Thirds photographers and a dream come true for those who shoot video. The 20-50mm equivalent range isn’t replicated anywhere else, taking you from very wide to standard coverage and making it a surprisingly versatile walkaround lens. The minimum focusing distance allows it to grab useful close-ups, but it’s the constant f1.7 focal ratio that makes it really special - indeed the attractive rendering and crisp results means it could easily replace a bunch of primes in your bag. The range and aperture are perfect for video shooters who’ll also love the clickless aperture ring (at least on Lumix G bodies) and linear manual focusing. If you’re a stills photographer, it remains very attractive, but is up against tough alternatives. Wide-angle fanatics will prefer the Leica DG 8-18mm with its wider coverage, smaller barrel, narrower filter thread and far lower price. The 8-18mm also suffered from less field curvature than the 10-25mm in my tests and I also have to mention the high price which is comparable to a full-frame 16-35mm f2.8. But again if you’re shooting Micro Four Thirds, there’s simply nothing like it. Videographers have found their holy grail, stills shooters could be seriously tempted, and Micro Four Thirds continues as a compelling format.

Check prices on the Leica DG 10-25mm f1.7 at B&H or at Adorama, or if you're in the UK at WEX. Alternatively get yourself a copy of my In Camera book or treat me to a coffee! Thanks!

The 10-25mm is the latest collaboration between Leica and Panasonic for the Micro Four Third system. Like earlier models, the 10-25mm is designed and certified by Leica in Germany, and manufactured by Panasonic. As such it may not be ‘pure’ Leica, but the optical and build quality is of a very high standard.

The Leica DG 10-25mm offers something unique for what’s already the broadest native mirrorless lens catalogue: a wide to standard zoom with a very bright focal ratio, making it great for low light or video shooters, as well as achieving shallow depth-of-field effects. It employs 17 elements in 12 groups including three aspherical, four ED and one UHR element, has nine diaphragm blades and an impressively close focusing distance of 28cm. The dust and splash-proof barrel measures 88mm in maximum diameter, 128mm in length, weighs 690g, has a 77mm filter thread and comes supplied with a lens hood. The aperture ring is de-clicked and smooth, while the manual focusing employs a pull-back clutch ring, both ideal for video use. In my full review I’ve compared the quality against a variety of lenses including the Leica DG 8-18mm f2.8-4 and the Leica 25mm f1.4, so if you’re looking for a unique and versatile lens for photography and especially video, watch my video review below, or keep reading for the highlights! PS – you might also enjoy my Best Micro Four Thirds lenses guide. 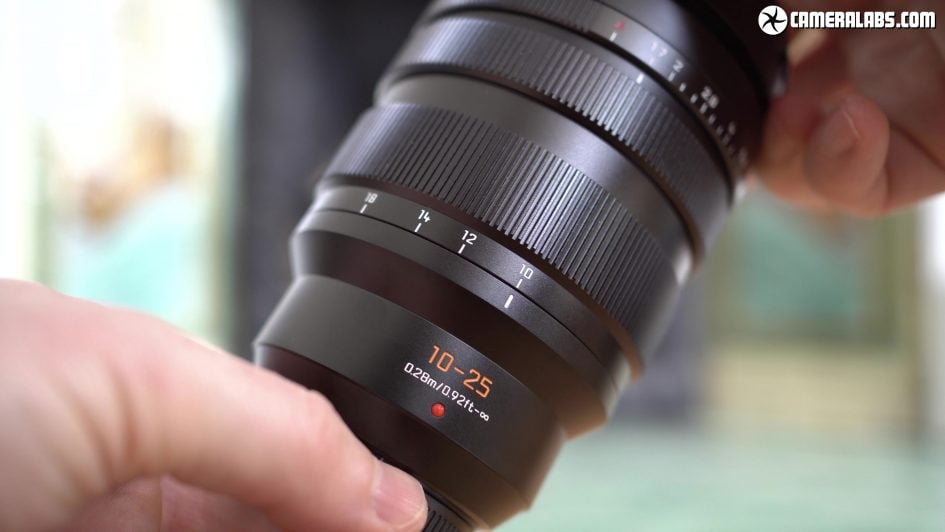 Above: The DG 10-25mm is the latest collaboration between Leica and Panasonic, with the former designing the lens and the latter manufacturing it. As such it may not be pure-Leica, but like their earlier collaborations with Panasonic, it remains an unapologetically high-end option costing around $1800 dollars or pounds. 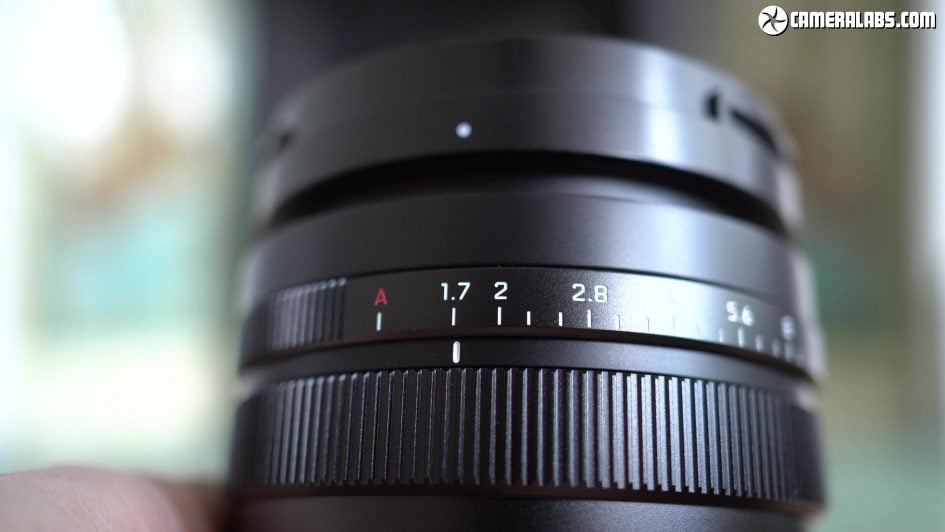 Above: Panasonic describes it as the first standard zoom with a constant f1.7 focal ratio. There’s certainly not much like it, even in the extensive Micro Four Thirds catalogue and it’s refreshing to find genuinely new lenses come to market. The closest is arguably Sigma’s 18-35mm f1.8 ART, a lens designed for slightly larger APSC sensors and beloved by video shooters who Panasonic and Leica are clearly also targeting with their model. Sigma’s version comes in considerably cheaper at around 800 dollars or 650 pounds but lacks the wider coverage at the short end when mounted on the bodies they’re designed for. 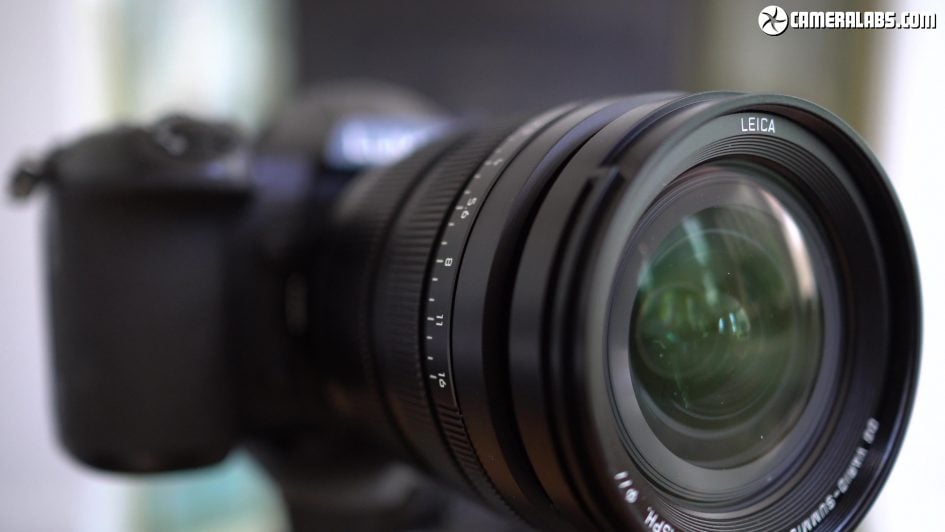 Above: With its fast and constant focal ratio, the DG 10-25mm is an unsurprisingly substantial lens with the dust and splash-proof barrel measuring 88mm in maximum diameter, 128mm in length and weighing 690g. It’s not as heavy as you’d expect, but still a lens that feels most comfortable on the larger bodies in the system like Panasonic’s Lumix G9 or GH models, or the Olympus OMD EM1 series. Alongside the Leica DG 8-18mm f2.8-4, it’s positively gargantuan. 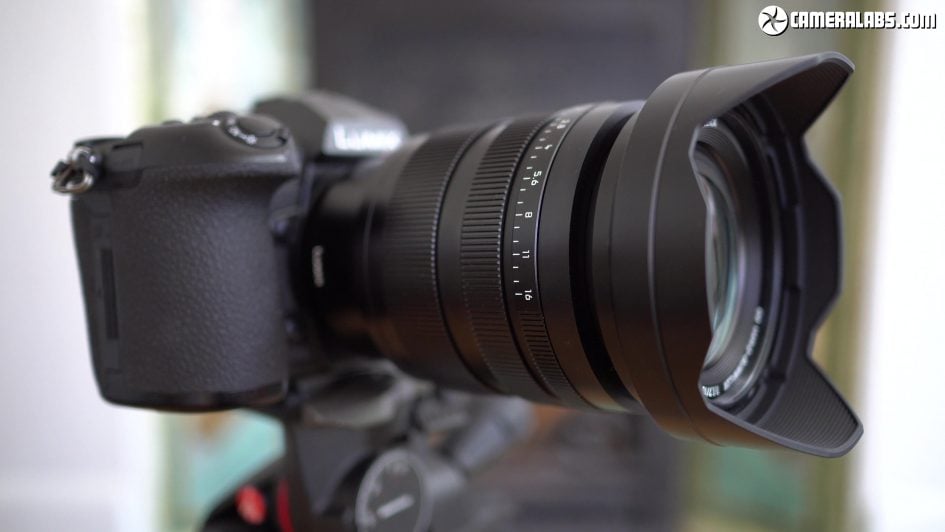 Above: The lens is threaded for 77mm filters and is supplied with a plastic bayonet hood. 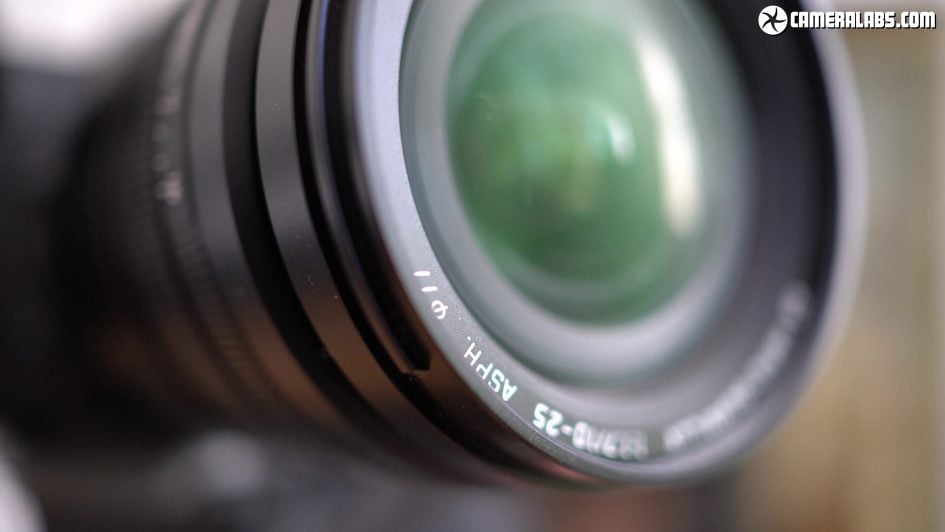 Above: The Leica-designed optical construction consists of 17 elements in 12 groups including three aspherical, four ED and one UHR element. It has nine diaphragm blades and a closest focusing distance of 28cm which as you’ll see later, allows you to take decent shots of fairly small subjects. There’s no optical stabilisation, so to iron-out any wobbles you’ll need a body with built-in sensor-stabilisation, although luckily that includes most Panasonic and Olympus cameras. 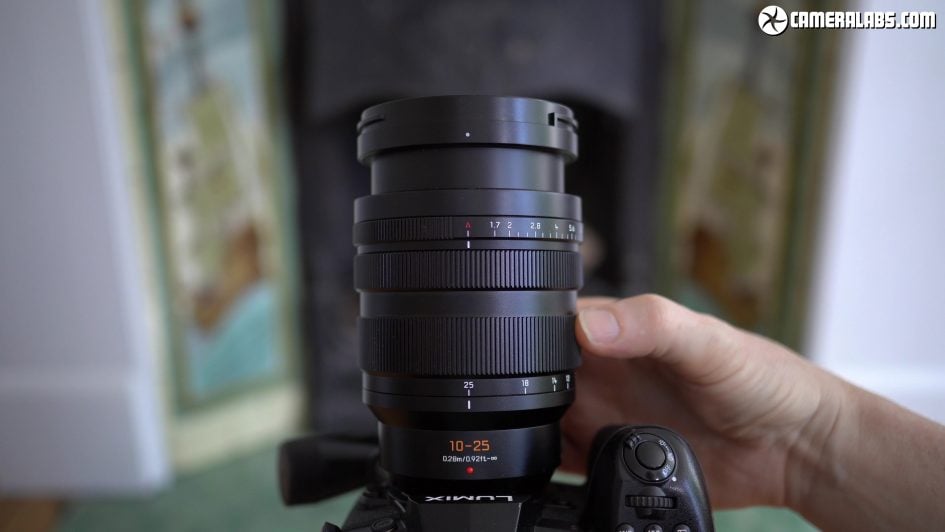 Above: The smooth zoom ring has a rotational throw of about 90 degrees and sees the barrel extend a little at 10mm and a little more at 25mm. The barrel is technically at its shortest at around the 13mm focal length, but there’s only about 3mm difference in physical size when set to the 10mm focal length. 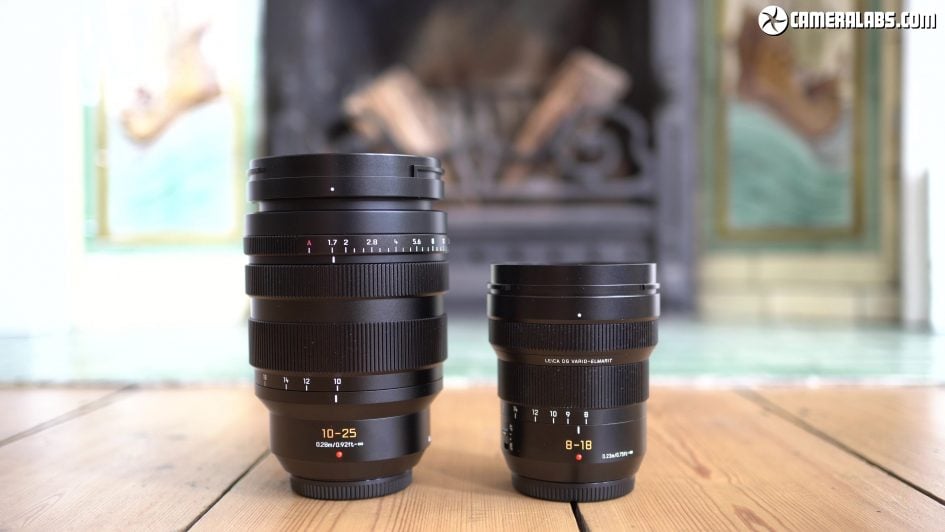 Above: If you’re thinking about the 10-25mm, chances are you’re also interested or maybe even already own the Leica DG 8-18mm, Panasonic and Leica’s earlier ultra-wide zoom. It’s almost half the price at around 1000 dollars or pounds, zooms a little wider, can use smaller 67mm filters including the Lee Seven5 system and is considerably more compact. But with a variable f2.8-4 focal ratio it’s between one and a half and two and a half stops slower, while also lacking the longer 25mm focal length. I’ll compare their quality in a minute but let’s start by looking at their ranges.

Above: here’s the 10-25mm mounted on a G9 filming in 4k where it uses the full sensor width, starting at the widest 10mm for a 20mm equivalent which is wide enough for most before zooming into 25mm for a standard 50mm equivalent field of view. It’s an unusual but very useful range taking you from respectably wide to standard coverage, making it an ideal general-purpose zoom. Download the original file (Registered members of Vimeo only).

Above: now for the DG 8-18mm again on the G9 and starting at 8mm for serious ultra-wide coverage equivalent to 16mm, that’s comfortably wider than the 20mm widest equivalent of the 10-25mm. But at the other end of the range, the 8-18mm remains in wide-angle territory. Sure, it’s a mild wide-angle, but an equivalent of 36mm still lacks the reach to standard 50mm coverage of the 10-25mm. So which range would you find more useful? Download the original file (Registered members of Vimeo only). 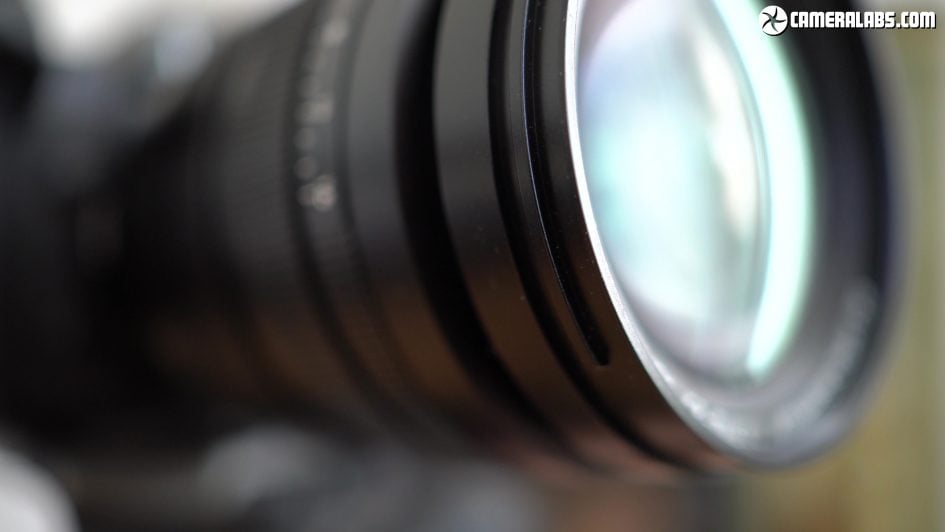 Above: While the range is important, arguably the biggest selling point of the 10-25mm is its constant f1.7 focal ratio, making it almost two stops faster than the 8-18mm when both are at 10mm, and two and a half stops faster when both are at 18mm – plus of course the 10-25mm maintains f1.7 all the way to 25mm. This allows you to deploy lower ISOs under the same conditions as well as achieving shallower depth-of-field effects. 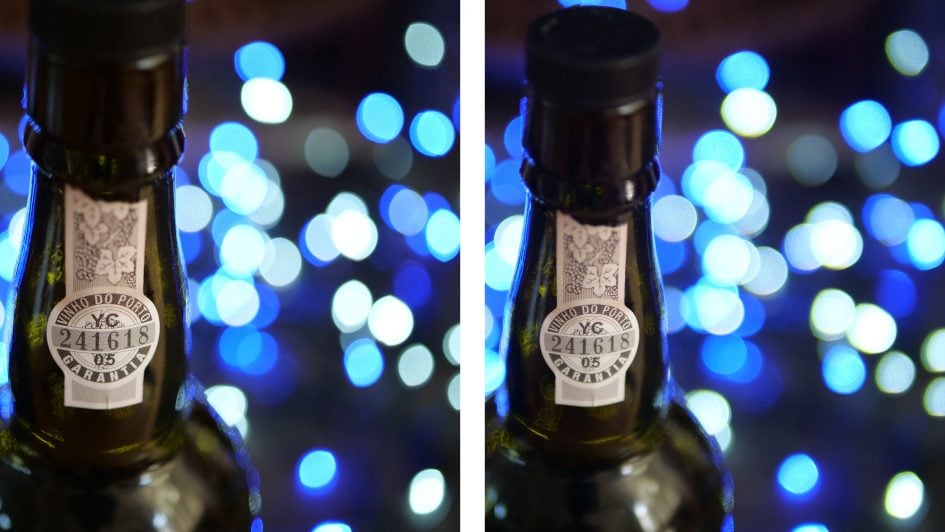 Above: Cementing its usefulness for video, Panasonic equipped the 10-25mm with a click-less aperture ring that turns silently and smoothly. This works on most Lumix G bodies although you may need a firmware update. It didn’t work on the Olympus bodies I tried, so you’ll need to set the ring to A and control it using the body instead, which is also an option on the Lumix bodies if you prefer. Now for two examples showing the effect of smoothly adjusting the aperture from f1.7 to f16 and back again. 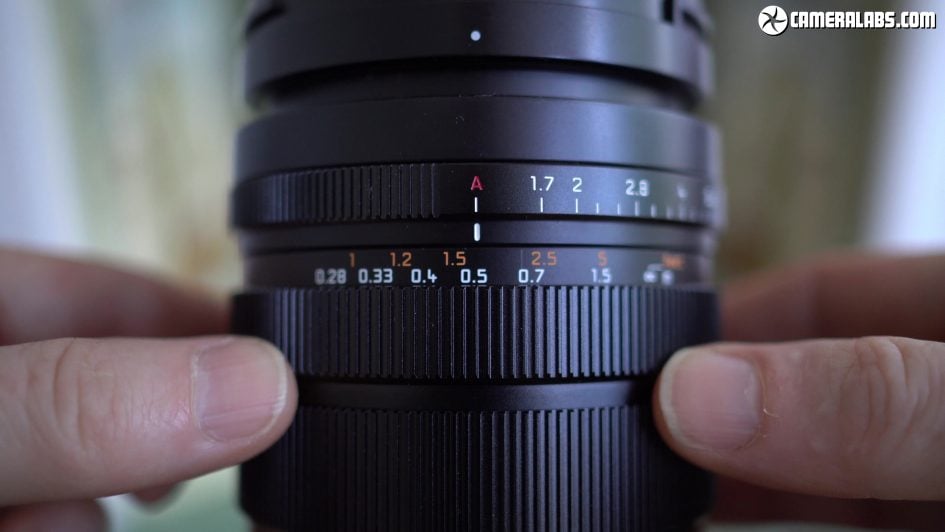 Above: If you prefer to manually focus, the 10-25mm is a joy to use with a pull-back clutch ring that reveals distance markings and allows linear adjustments beloved by video shooters. The clutch mechanism snaps down and back again with a very satisfying click. 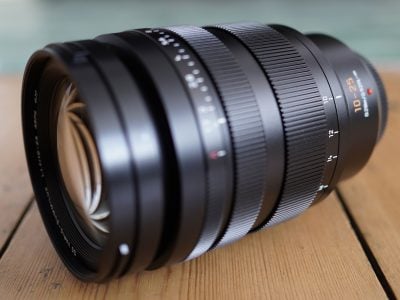 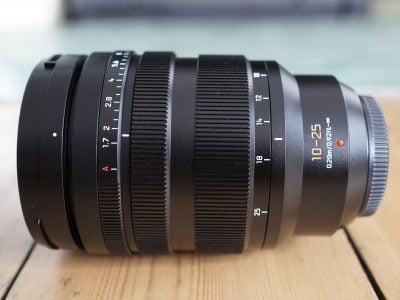 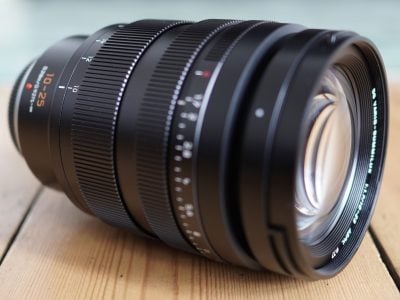