The Olympus PEN E-PL9 is an entry-level mirrorless system camera that will appeal to beginners, social photographers and vloggers. Its 16 Megapixel Four Thirds sensor may be smaller and lower resolution than the typical 24 Megapixel APSC sensors of rival models, but it's stabilised within the body very effectively and delivers great-looking images with ease; indeed it's only at very high ISOs that you begin to see the lower noise benefit of APSC sensors. The E-PL9's touchscreen flips down to face-forward for selfies and vlogging, again exploiting the excellent stabilisation, although this in turn blocks the tripod mount and the camera also lacks a microphone input. Unlike the Fujifilm X-A5 though, the 4k video is usable, supporting 30p for smooth motion, while the new AP position on the mode dial gathers together all of the cunning Olympus shooting modes that may otherwise go unnoticed by new owners. Recommended, but compare closely with the Sony A5100, Canon EOS M100 and Fujifilm X-A5.

Check prices on the Olympus Pen E-PL9 at Amazon, B&H, Adorama, or Wex. Alternatively get yourself a copy of my In Camera book or treat me to a coffee! Thanks!

The Olympus PEN EPL9 is an entry-level 16 Megapixel mirrorless camera aimed at those wanting to upgrade from their smartphone and take the next step in creative photography. Announced in February 2018 it comes a year and a half after its predecessor, the PEN EPL8, and like that model is designed to appeal to bloggers and social photographers. Like all PEN and OMD models to date, the EPL9 is based on the Micro Four Thirds standard, giving it access to the largest selection of native mirrorless lenses around.

Available in white, black or brown finishes, the PEN EPL9 looks and feels good in your hands, sports a larger and more comfortable grip than its predecessor and usefully squeezes in a popup flash, compared to the slide-on accessory that came with the EPL8. As before, there’s no built-in viewfinder (and now no means to slot-in a viewfinder accessory) so you’ll be composing entirely with the screen. The screen can tilt up by 90 degrees or down by 180 to face the subject for selfies or vlogging, although when doing so you’ll block the tripod mount so it’s handheld vlogging and selfies only. Olympus has enhanced the touch-screen control though, allowing you to tap your way through the ART filters, scene presets and advanced modes. Speaking of which, the new AP position on the dial rounds-up most of the clever shooting modes that were previously scattered (and often lost) amongst menus, while the selection of ART filters gains new Bleach Bypass and Instant Film options.

The EPL9 sticks with the 16 Megapixel sensor of its predecessor, but couples it with the latest Olympus image processor which allows it to support 4k video at up to 30p for clips lasting up to half an hour. The EPL9 sensor is also stabilized within the body, allowing it to significantly reduce camera-shake with any lens you attach. The AF system has also been upgraded to 121 points covering most of the frame, and the EPL9 now also includes Bluetooth to make Wifi connections to your phone for remote control and photo transfer easier; I’m confirming about the GPS implementation. Many of the upgrades were previously seen on the recent OMD EM10 Mark III – and indeed the EPL9 could be considered as a viewfinder-less version – but with its more compact body, stylish looks and front-facing screen, it’ll remain a popular choice with vloggers and bloggers ailke.

In my review I’ll test the new features, see how it measures-up for the target audience, and how it compares to key rivals including the Fujifilm X-A5. So if you’re looking for an entry-level mirrorless camera, read on!

I’ll start with a first-looks video by Gordon to explain the highlights. 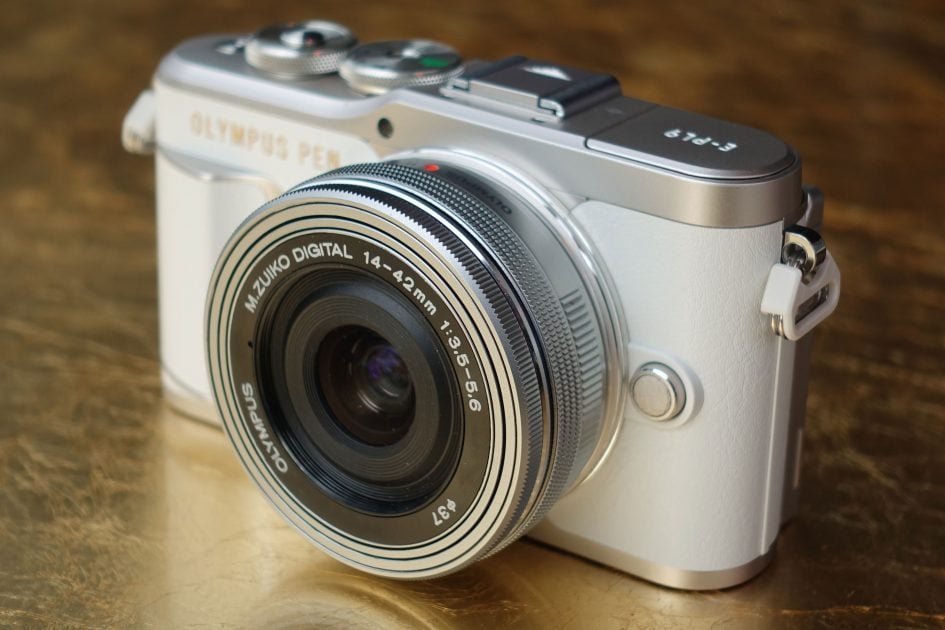 The Olympus PEN E-PL9 has undergone a redesign that goes beyond the merely cosmetic, though it does look cleaner, cooler and less ‘gadgety’ than before. The handgrip is now more substantial and the contours are generally a little softer. It’s the same size as its predecessor though, and weighs more or less the same. With the 14-42mm ‘Pancake’ powered zoom fitted, it will fit comfortably in a handbag or even a jacket pocket, and is a little more portable than the Fujifilm X-A5 which has a similar sized body, but larger lenses. 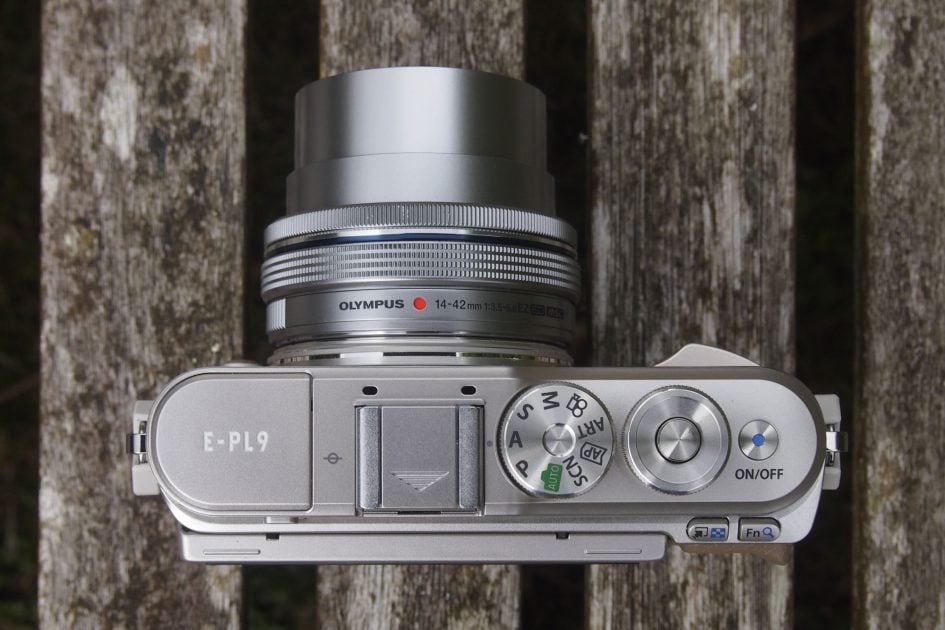 The top panel finally sees the introduction of a built-in flash which is extended via a small button on the rear. The E-PL9 still sports a hotshoe for an external flash and other accessories, but the Accessory Port, which could accommodate optional extras like a viewfinder, microphone and lighting has been discontinued. The mode dial is slightly larger than before and ,as before, the single control dial surrounds the shutter release. 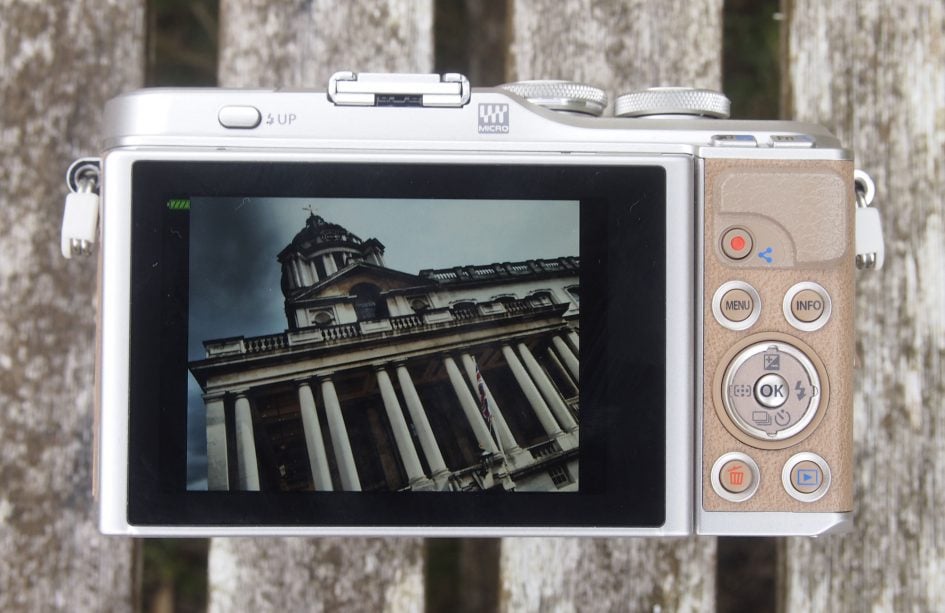 Aside from a redesigned thumb rest, the back of the PEN E-PL9 looks very similar to its predecessor. The 3 inch 1040k dot 3:2 proportioned touch screen has very similar specifications to that on the Fujufilm X-A5. Both screens flip forwards to face you for selfies, but whereas the X-A5’s screen folds above the camera body, the PEN E-PL9’s goes in the opposite direction and appears below. While it seems a bit strange at first, I don’t think there’s much of an advantage one way or the other. Both provide a clear view of the screen when it’s facing you, but on the X-A5 the hotshoe is obstructed and on the E-PL9 you can’t use the tripod mount. 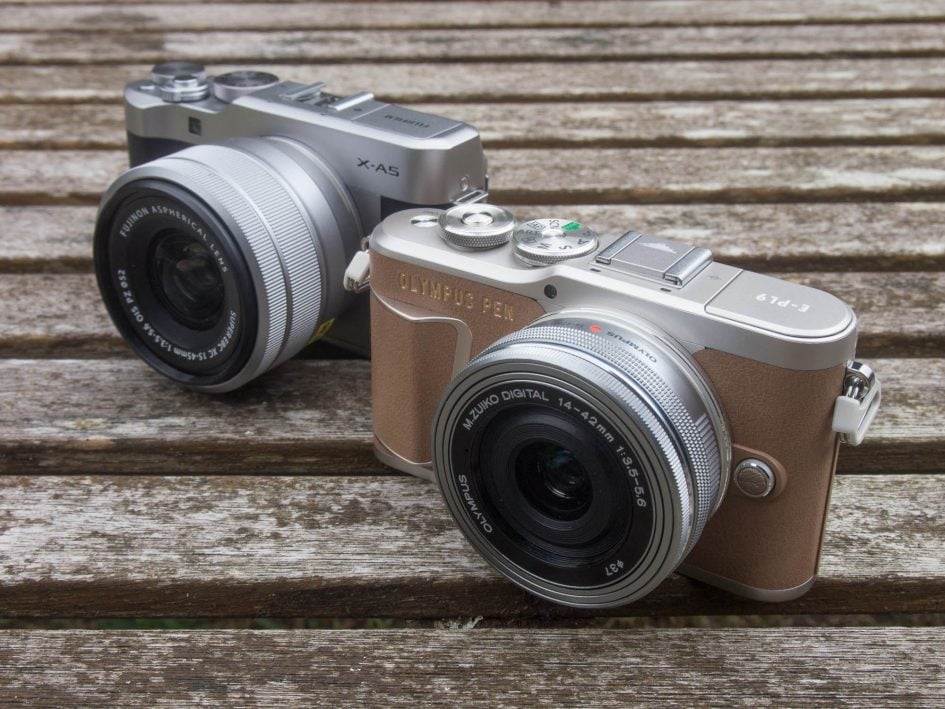 Side-by-side here you can see that there’s little to separate the X-A5 and E-PL9 in terms of size and weight, at least as far as the body goes. Because of its physically larger APS C sensor The X-A5’s X-system lenses are a little larger than the E-PL9’s Micro Four Thirds lenses. In practical terms this means you can comfortably fit the E-PL9 with its powered kit lens in a coat, or even jacket pocket, but the X-A5 is more of a handful. With the cameras powered off and the lenses retracted (as they are in this shot) the E-PL9’s depth is 60mm compared with 83mm for the X-A5.

Here’s the angle of view with the 14-42mm kit lens on the PEN E-PL9. There’s a slightly less expensive non-powered version of this lens, but it’s not quite as compact, though it covers the same 28-84mm 35mm-equivalent range. The Fujifilm X-A5’s powered kit zoom has a significantly wider 23-69mm equivalent range which gives you a bit more scope when framing selfies – especially for small groups – as well as for shooting in cramped interiors. 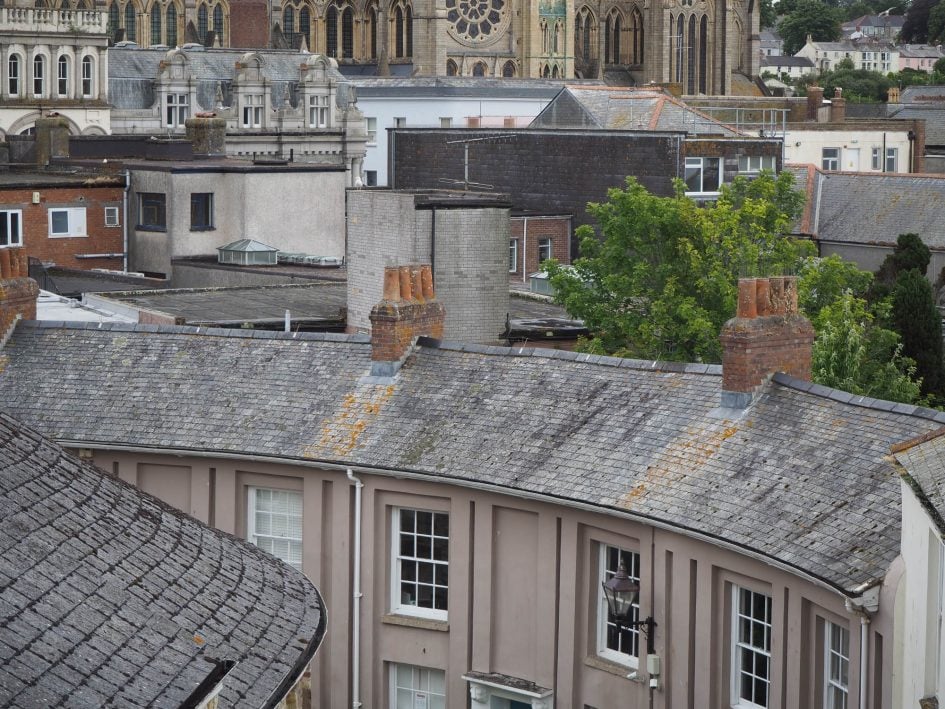 At the other end of the range, the PEN E-PL9’s 84mm gets you a little tighter than the 69mm equivalent of the X-A5’s lens. That said, both do a fair job for portraits, though the f5.6 maximum aperture when zoomed in means you need to keep backgrounds a few metres distant in order to blur them. Of course, there’s nothing to stop you fitting a different lens and Micro Four Thirds owners have a wide range to choose from. See Gordon’s Best Micro Four Thirds lenses guide. 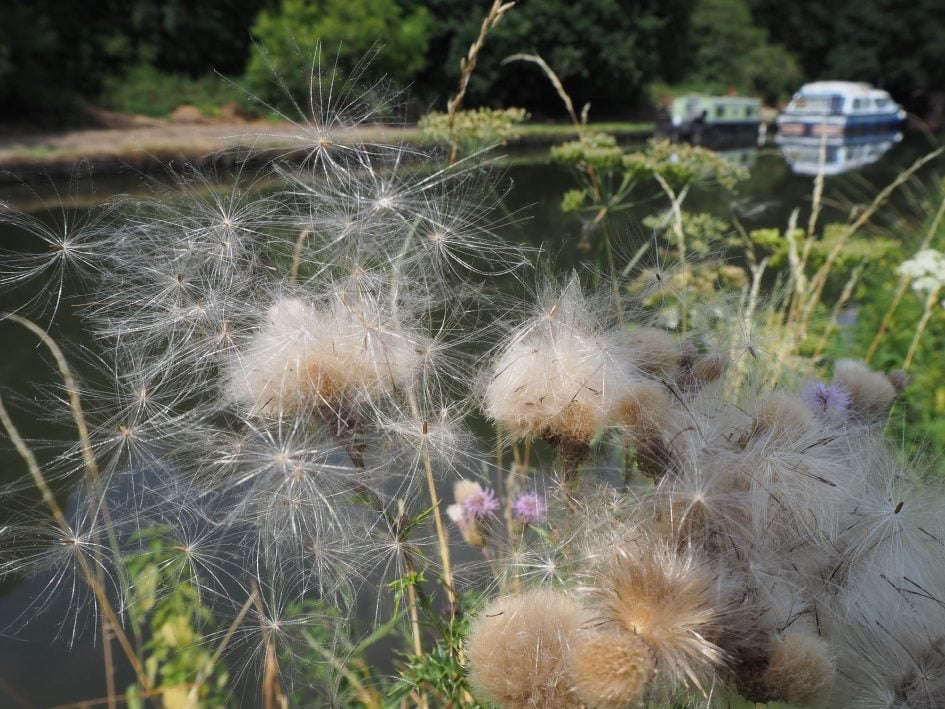 In practice, I found the closest I could focus with the 14-42mm EZ lens on the E-PL9 was 85mm which isn’t nearly close enough to fill the frame with a small subject like an insect or small flower. If you’re into macro photography, you’ll probably need to invest in another lens, like the Lumix 30mm f2.8 Macro or Olympus 60mm macro. 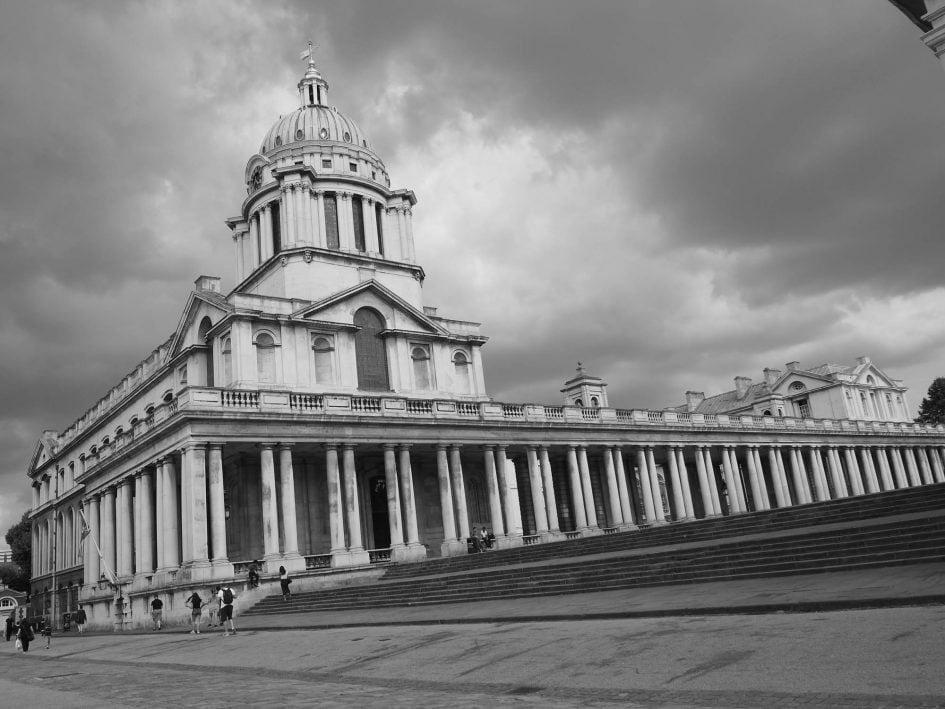 The PEN E-PL9 offers a number of picture modes, they’re not tied to film stock as on the X-A5, but are more prosaically named – Natural, Vivid, Muted, Portrait, Monochrome etc. As on the X-A5 the PEN E-PL9 allows you to simulate the use of coloured filters for black and white photography. 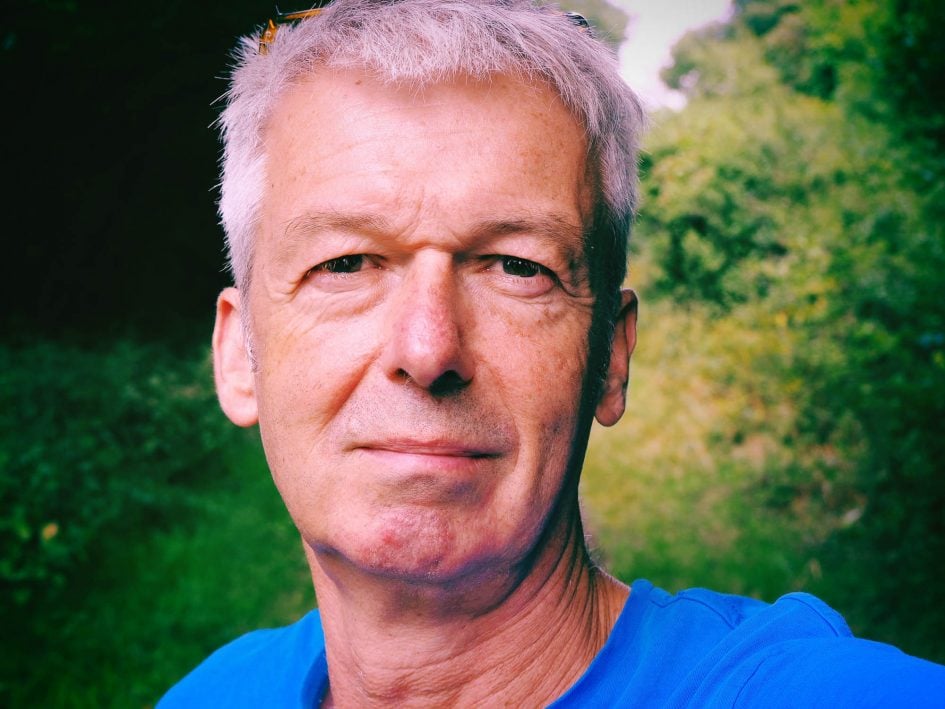 Again in 1080 / 60p mode, and with the stabilisation on, this low-light indoor pan looks good in terms of the noise quality. The E-PL9 handles the white balance well in tricky mixed lighting, but the continuous Af takes a little wander part way through, before correcting itself.

For this vlogging clip the PEN E-PL9 is again in 1080 / 60p mode, with the lens set to the 14mm maximum wide angle and the screen flipped into the forward facing position below the camera body. Here’s where the dual stabilisation really comes into its own, doing a great job of keeping things steady. With the screen in its forward-facing position below the camera, you can’t mount it on a tripod, but it’s comfortable enough to hold and the record button is easy to reach – Olympus puts a soft record button on the screen when it’s forward facing, which is nice, but not all that practical for single-handed operation.

Finally, here’s a short clip recording in the PEN E-PL9’s 4K / 30p mode. Unlike the Fujifilm X-A5’s 4K 15p mode, the E-PL9 produces good quality 4K video that captures smooth motion perfectly. That makes it the clear winner if 4K quality is a must have – the X-A5’s 4K mode is really only good for the 8 Megapixel 15fps burst shooting modes it provides. 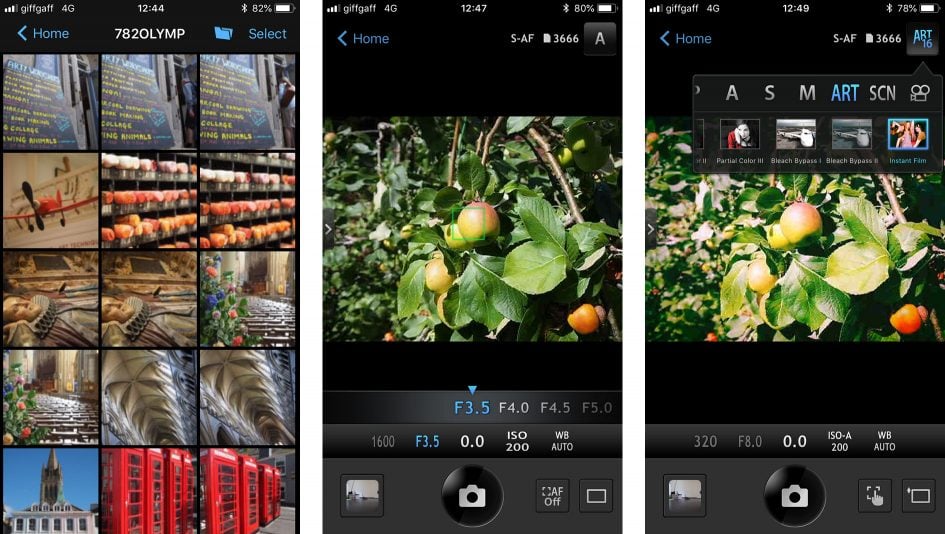 The PEN E-PL9 is equipped with Wifi and Bluetooth for image transfer and remote operation of the camera using your smartphone. The Bluetooth connection can be used to maintain a link and transfer images with the camera even when it’s switched off. The Olympus OI Share app provides a lot more control over the camera when remote shooting than the Fujifilm X-A5. I was pleased to discover that I could operate the powered zoom from my iPhone as well as set the AF area, change the ISO and white balance and even switch shooting mode – that’s right, even if the mode dial is set on, say, program auto mode, you can select any of the other PASM modes, the ART, SCN and movie positions.

The E-PL9’s new panorama feature is just one of the modes available with the mode dial in the new Advanced Photo mode position; others include Live Composite, Live Time (long exposures that you can view on screen as they happen), Multiple Exposure, HDR and expoosure and focus bracketing. It works in the familiar way – you pan while rotating the camera in either portrait or landscape orientation and the results are auto-stitched in the camera. You’re not prevented from zooming the lens, and it appears to work with any lens attached providing, according to Olympus, either 2x or 4x the normal angle of view in Std or Full mode. 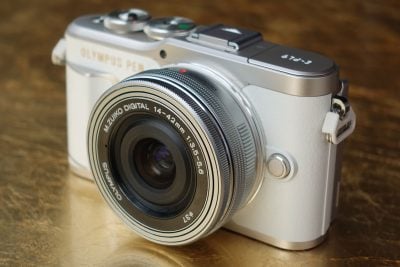 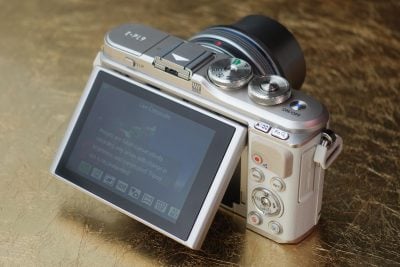